Home » Ports of Call » Europe » Russia » Top Things to Do in St. Petersburg, Russia on a Cruise

Are you visiting St. Petersburg and wondering what to do in this iconic city? We have our Top Things to Do in St. Petersburg, Russia on a Cruise guide to help your planning process. 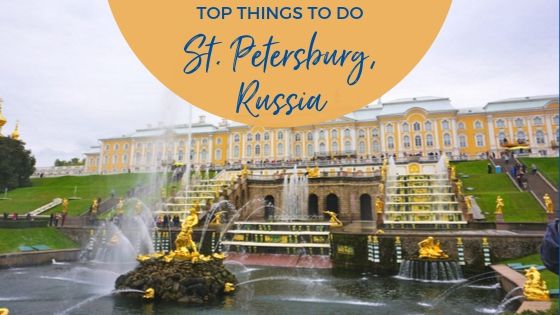 St. Petersburg, the former capital of Imperial Russia, is one of the most beautiful cities in the world. Perched on the banks of the Neva River, this relatively young city has withstood the rise and fall of Imperial Russia, three revolutions, and a civil war. With rich history, architecture, and culture, St. Petersburg has become a popular stop on many Baltic cruises, some even offering overnight stays. If you are wondering what to do during your visit to this iconic city, we have put together our Top Things to Do in St. Petersburg, Russia on a Cruise.

Located just outside of St. Petersburg in the town of Pushkin is Catherine Palace. Pass through the Egyptian Gates of the town to marvel at this grand estate presented to Peter the Great’s wife in 1717. From that time, this palace was used as the summer residence of the Russian tsars. The impressive palace with its blue and white façade and gold dome is an opulent example of baroque architecture.

During a visit to Catherine Palace, visitors can ascend the Great Staircase, view the Great Hall lined with mirrors and gold carvings, and explore the Amber Room. The Amber Room, lined with amber panels, was once referred to as the “Eight Wonder of the World.” After admiring the architecture, head outside to stroll the gardens comprising 1400 acres of manicured grounds with a lake at the center. 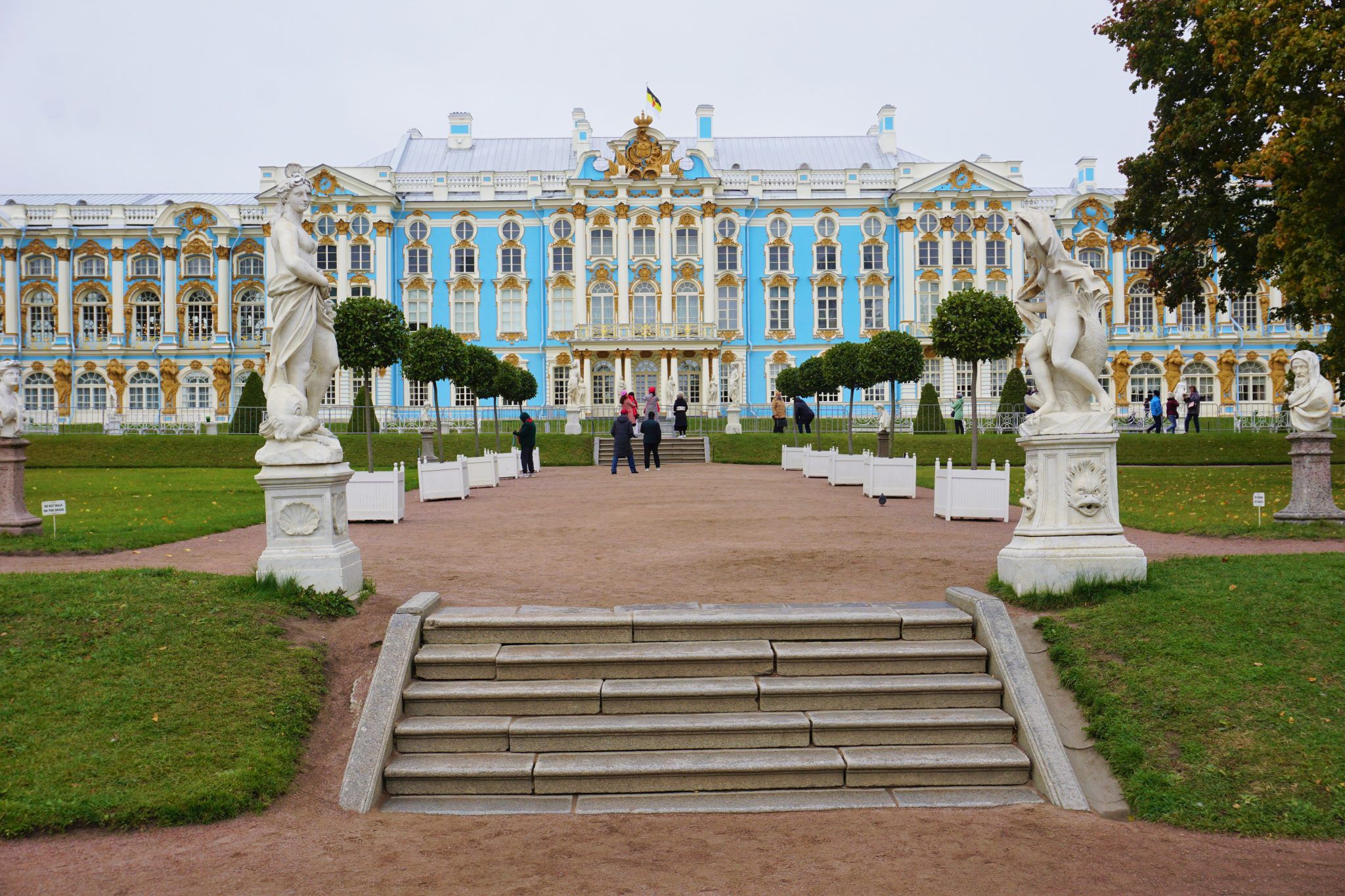 Sometimes called the Moika Palace due to its position on the banks of the Moika River, this house belonged to one of Russia’s wealthiest families, the Yusupovs. Here, you can tour the restored staterooms, halls, and living quarters. You can also view exhibitions and photographs to gain a feel for the luxurious lifestyle that once took place within the palace’s grand rooms.

This palace is also well-known for a darker reason. It is the site of the assassination of the Siberian peasant Rasputin. In December 1916, Felix Yusupov was worried that Rasputin had too much influence over Tsar Nicholas II, so he lured him to a cellar room and killed him. Today, visitors can view the actual room where Rasputin was poisoned then shot.

This grand palace was designed by Peter the Great and was fashioned after Versailles. The estate construction spanned two centuries and consists of lavish gardens and fountains also designed by Peter. During your visit, you can tour the European-inspired interior as well as the Lower Park. Some of the interior highlights include the Ballroom and the Throne Room.

Perhaps the biggest masterpiece on the grounds is the Grand Cascade, which can be found in the lower gardens. With three waterfalls, 64 fountains, and numerous statues, the grand display depicts Samson prying open a lion’s jaw as water cascades down the terrace steps. This attraction with the Grand Palace in the background is truly a sight to behold. 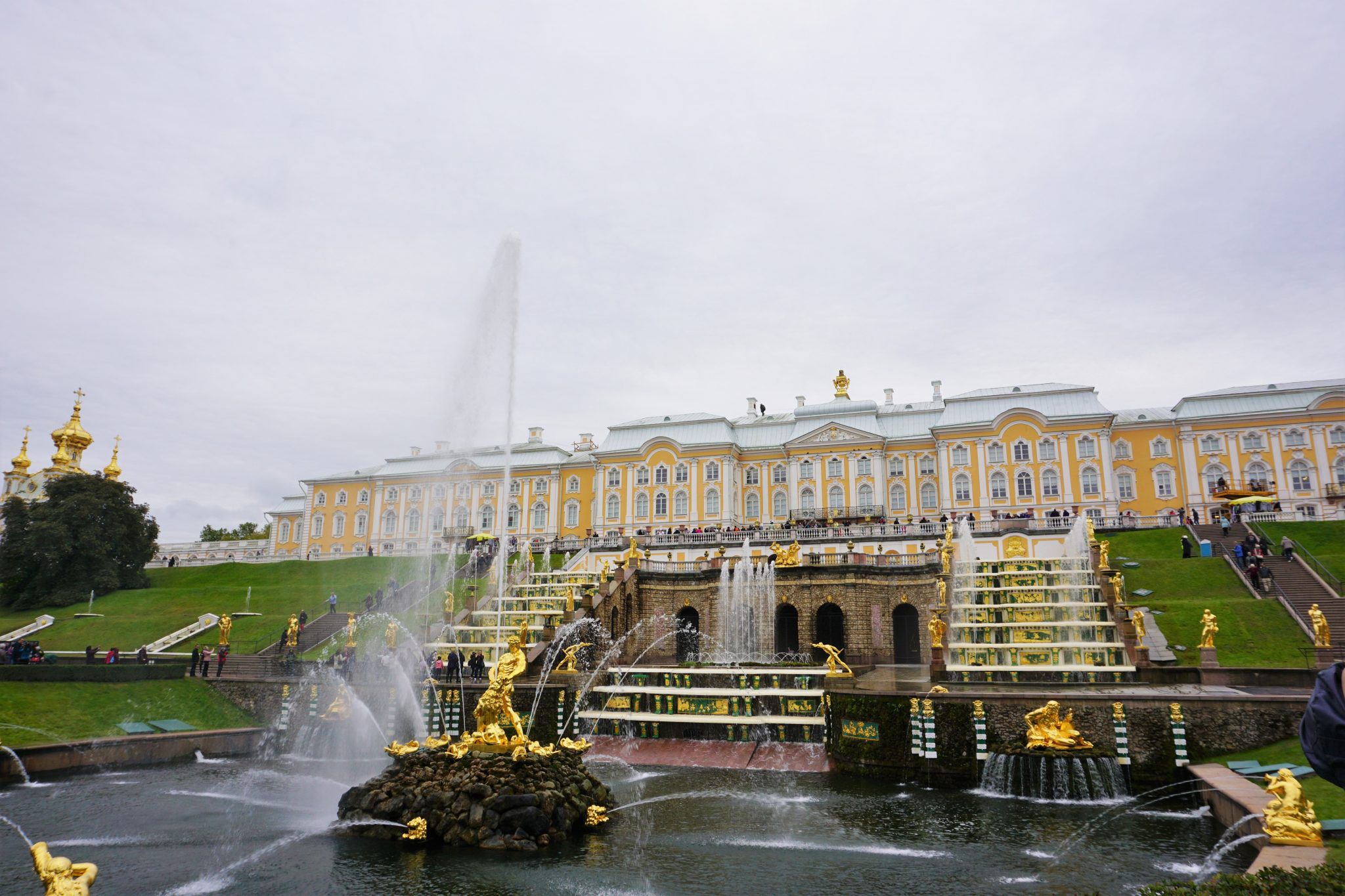 The Hermitage Museum boasts over 3 million works of art and historic Russian artifacts, including paintings by Da Vinci and Rembrandt. Only a fraction of these works are on display though. As one of the largest art museums in the world, the Hermitage occupies the Winter Palace (the winter residence of the Russian tsars) as well as four additional buildings.

During your visit to the Hermitage, head up the Jordan Staircase of the Winter Palace to explore. You can marvel at some of the finest spaces with impressive white columns, glittering chandeliers, and remarkable portraits. Some of the noteworthy rooms include the Throne Room, the Gallery of 1812, and the Pavilion Hall with its peacock clock. Some tours also include a visit to the Gold Room. This room houses the world-famous collection of Scythian ornaments that were excavated from ancient burial sites and are part of the oldest gold collection ever discovered. 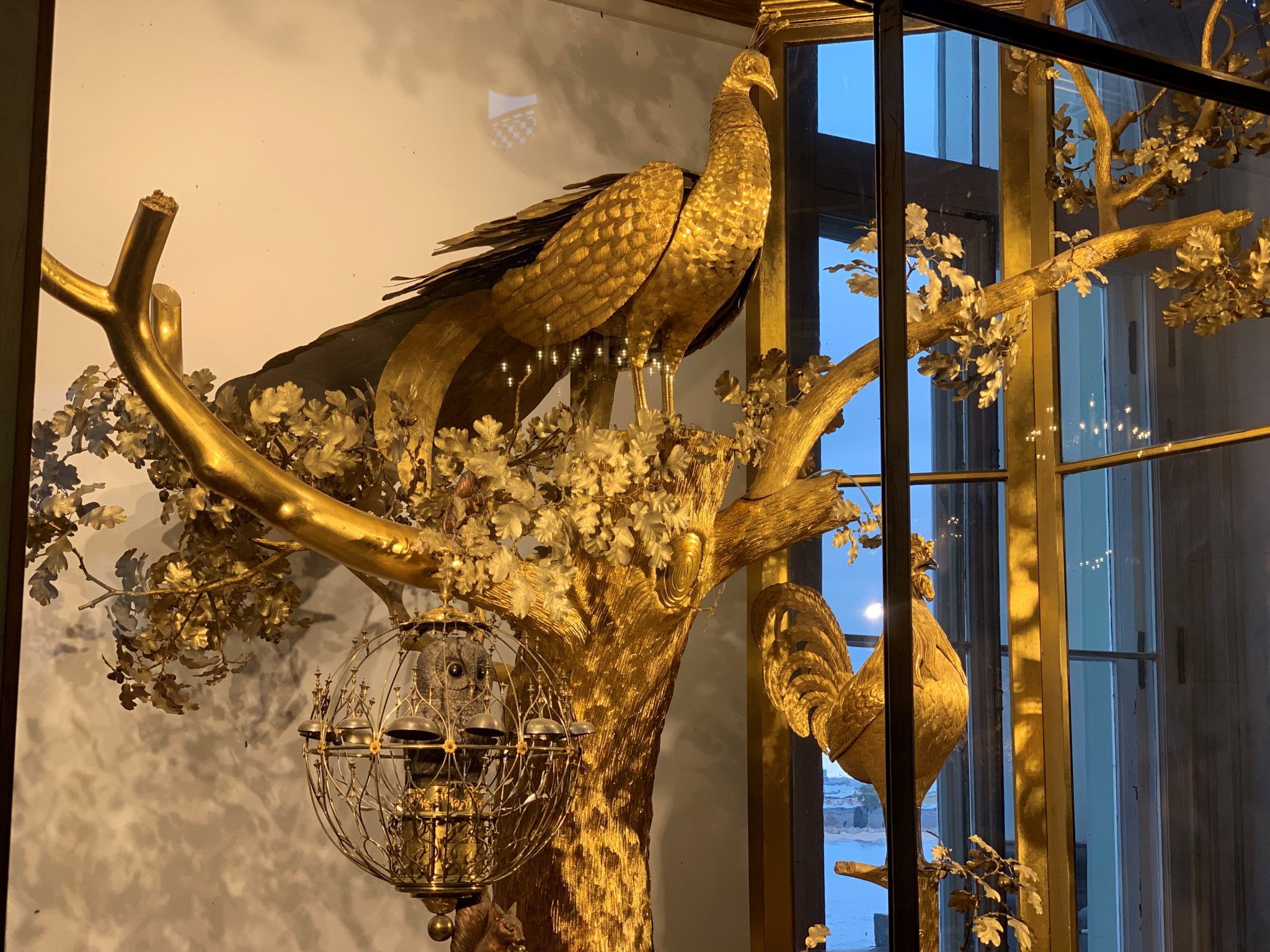 The Faberge Museum is privately owned and was established by Viktor Vekselberg and his Link of Times foundation in 2004. The aim of the Faberge Museum is to preserve items of cultural significance to Russia. This museum is located in the center of Saint Petersburg at Shuvalov Palace.

The museum’s collection contains more than 4,000 works of art. The most famous of them is the world’s largest collection of Fabergé Easter Eggs. Of the 43 known Eggs to have survived, nine Imperial Eggs were collected by Malcolm Forbes and were purchased by Vekselberg for $100 million. These Eggs were created by Fabergé for the last two Russian emperors and are regarded as the finest jeweled works of art.

Related Post: What You Need to Know Before Taking a Viking cruise

Church of Our Saviour on Spilled Blood

Built in remembrance of Alexander II, who was assassinated on this site in 1881, this cathedral with its five onion-domes exquisitely decorated is another magnificent example of Russian architecture. Combining the artistic styles of the 15th, 16th, and 17th centuries, the church houses an extensive collection of mosaics depicting religious themes. Do be sure to tour the church’s interior to view these masterpieces. 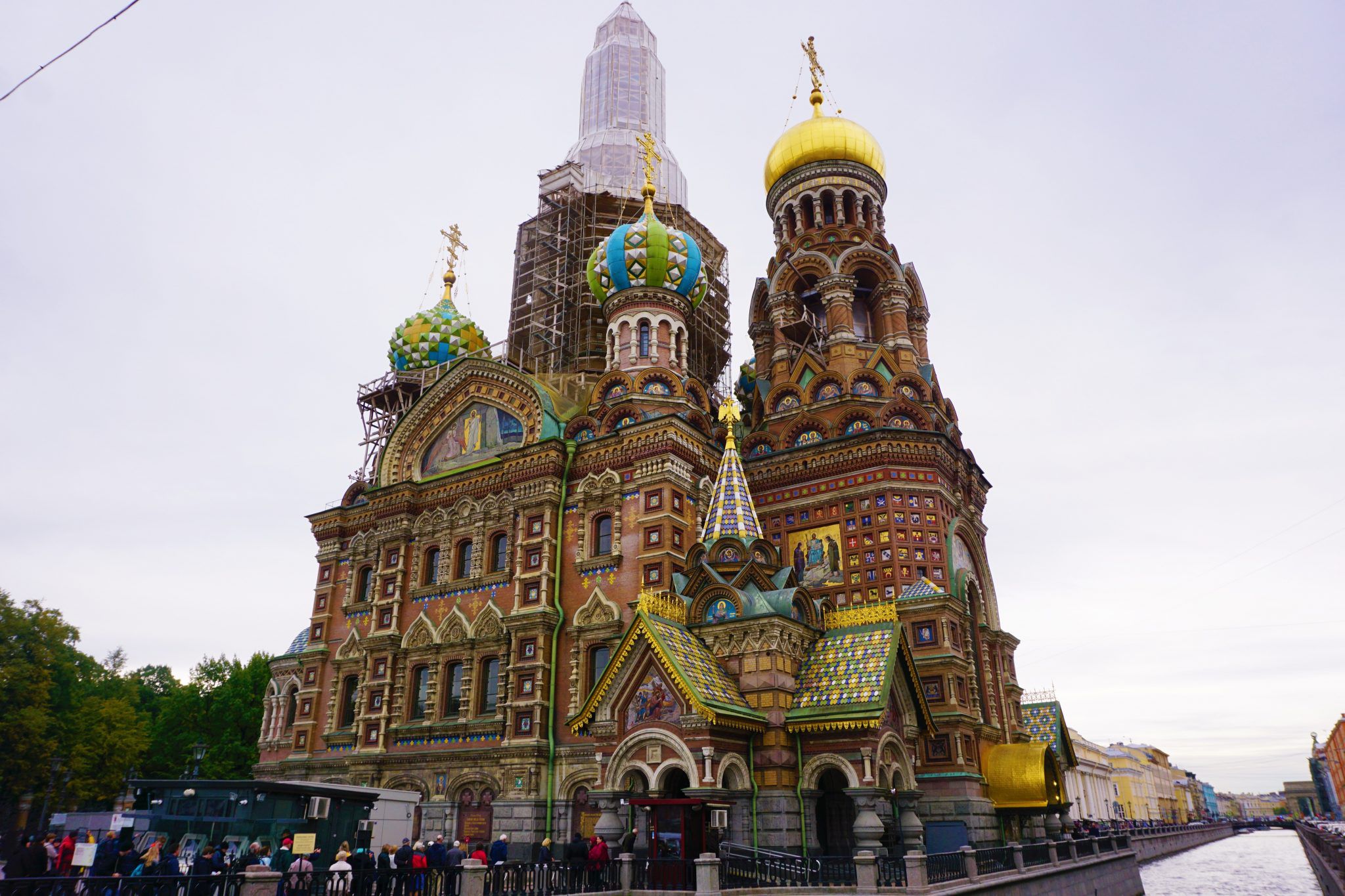 St. Isaac’s Cathedral, located in St. Issac’s Square, is the largest cathedral in St. Petersberg with capacity for 10,000+ patrons. Sculptures and towering red granite columns define the entrance of the building. The cathedral’s central dome is one of the largest in the world and is covered with pure gold. The interior is also ornately decorated with marble and semi-precious stones, intricate mosaics, columns, and paintings.

The iconic “Bronze Horseman” statue of Peter the Great is also located nearby in Senate Square. 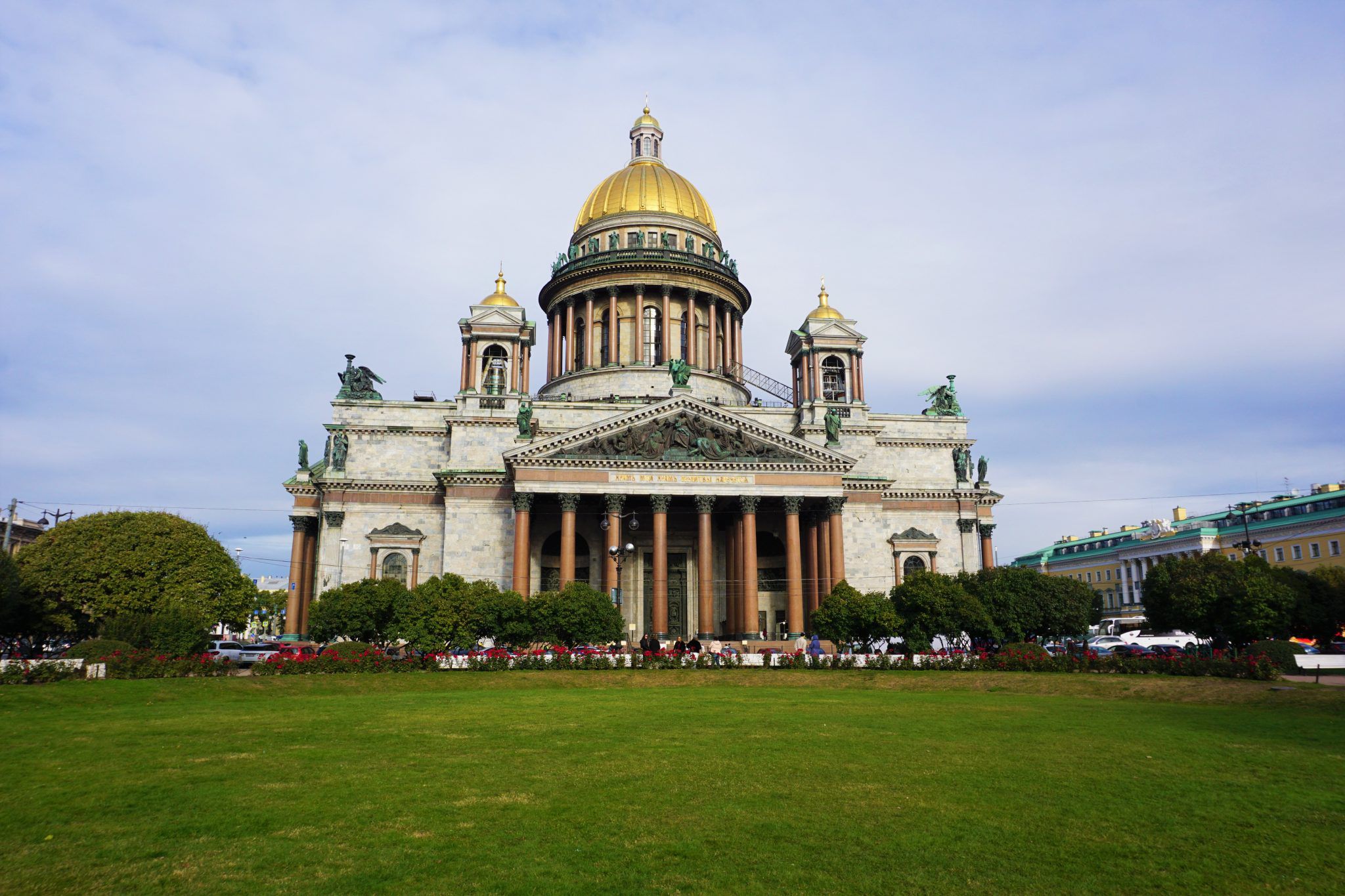 The Russian nobility once took a deep interest in ballet, supporting the construction of theaters in St. Petersburg. Today, the city boasts a large number of 19th century theatrical buildings. St. Petersburg is home to Russia’s first ballet school and is the birthplace of famous ballerinas such as Anna Pavlova and Diana Vishneva. Hence, taking in a performance of a Russian ballet is definitely one of the best things to do in St. Petersburg, Russia on a cruise.

Enjoy a classical and timeless performance unfold before your eyes. Marvel at the grace and precision of the dancers, while enjoying the symphonic musical arrangements. Depending on the timing of your visit, you will be treated to one of the classic ballets, such as Swan Lake, The Nutcracker, or Spartacus. We were fortunate to enjoy a performance of Spartacus at the Mikhailovsky Theatre during our visit. 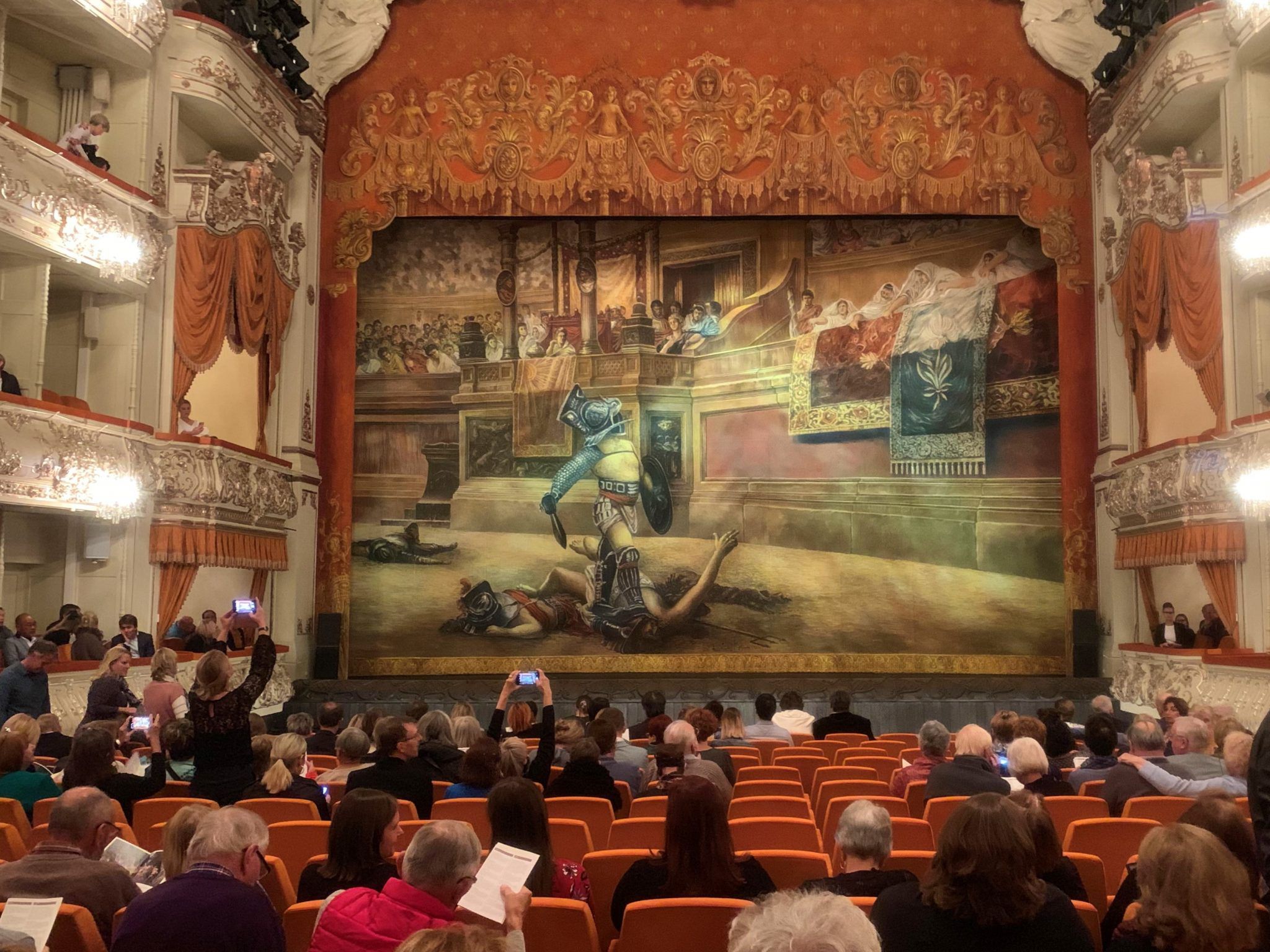 Head over to the Spit of Vasilievsky Island for more history and photo-ops. You will see the striking Rostral Columns which served as lighthouses in the 1800’s. You can also admire one of the major monuments of Peter the Great’s reign and the birthplace of St. Petersburg, the Peter and Paul Fortress. Originally built to protect the city from attack, this fortress was also used to house political prisoners including Peter’s own son.

Within the fortress walls, you can also visit the oldest church in St. Petersburg, the Peter and Paul Cathedral with its soaring spire. The ornate interior is filled with marble columns, chandeliers, and 18th century paintings. It is also the final resting place for many members of the royal family, including Peter the Great himself. 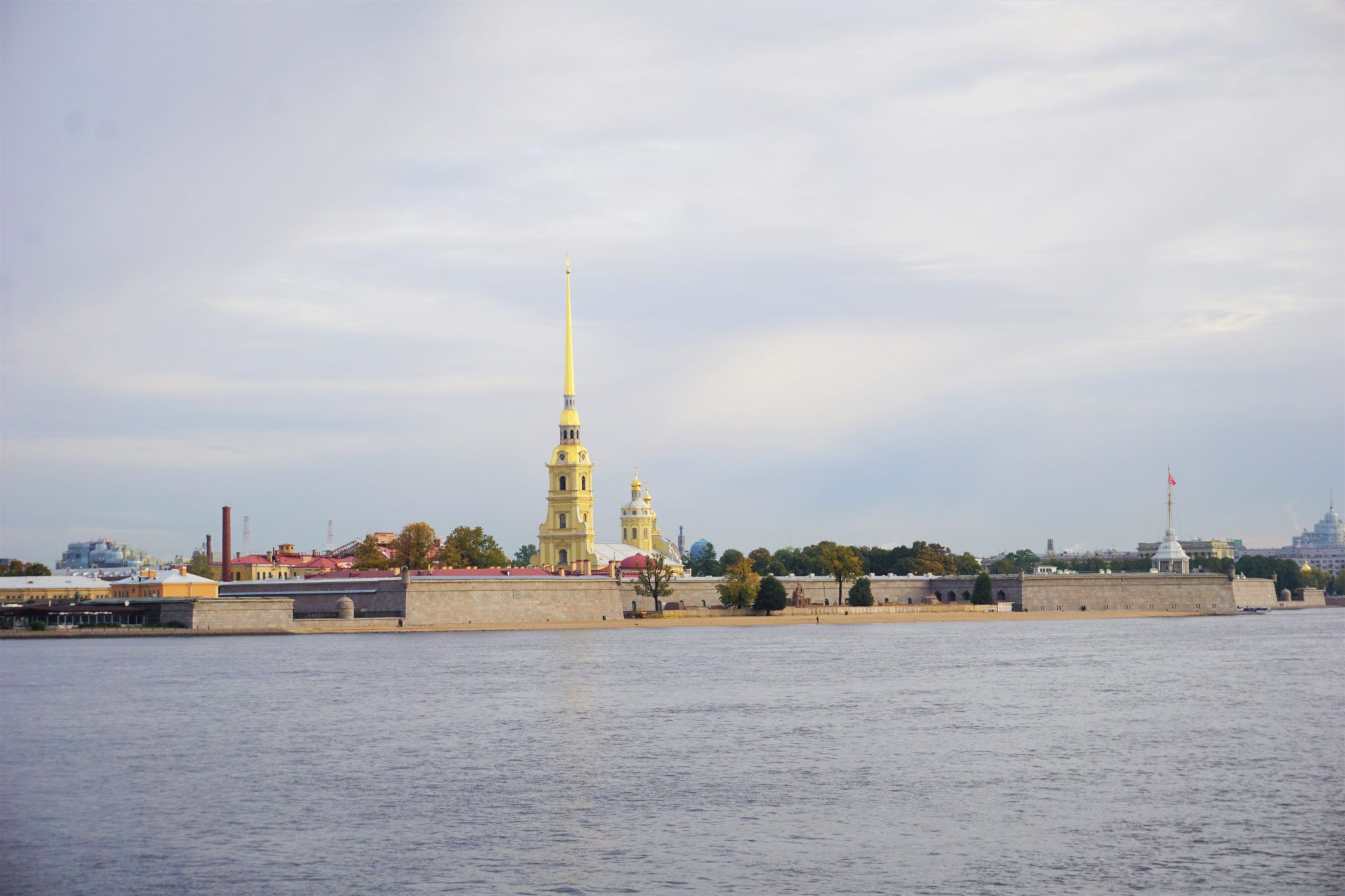 St. Petersburg was founded on the banks of the Neva River, the main waterway of the city. With an interweb of other rivers, canals, and waterways, a scenic cruise is a great way to gain a new perspective during your visit to St. Petersburg.

There are a few different cruise options mainly traveling along the Neva, Fontanka, or Moika Rivers. During your sail, you will see some of the magnificent palaces and cathedrals, pass under some of the city’s picturesque bridges, and gain panoramic views of sights like the Peter and Paul Fortress, the Hermitage Museum, and other hidden gems that can not be easily viewed by land.

If you are game for a long- and we mean very long- day, some cruise lines will offer an excursion to take a day trip to Moscow. You can take the 4+ hour high-speed train ride from St. Petersburg to Moscow admiring the beautiful Russian countryside along the way.

With this tour, you will learn how years of communism have shaped the people and architecture of Moscow. You will also visit highlights like the Kremlin, the fortified complex that houses the official residence of the President of the Russian Federation, the nearby Red Square with Lenin’s tomb, and the Armory which is one of the oldest museums in Moscow. 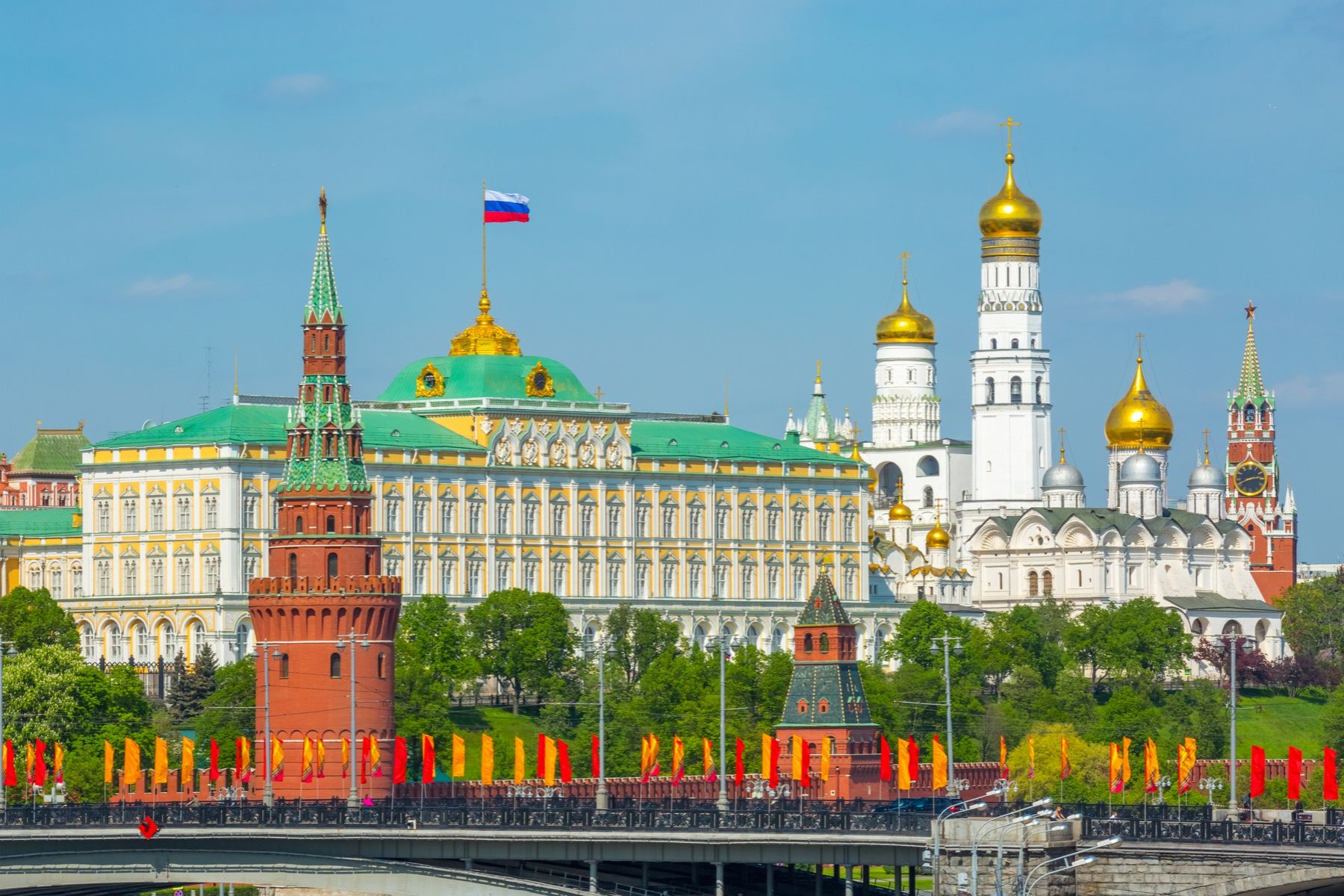 NOTE: If you plan on touring St. Petersburg on your own, you will need to obtain a travel visa. However, if you book an organized shore excursion through your cruise line or one of many tour operators, this should satisfy the government requirements (provided you are visiting for less than 72 hours).

Have you taken a Baltic cruise? Do you agree with our list of the Top Things to Do in St. Petersburg, Russia on a Cruise? Drop us an anchor below to share your experiences visiting this northern European city. 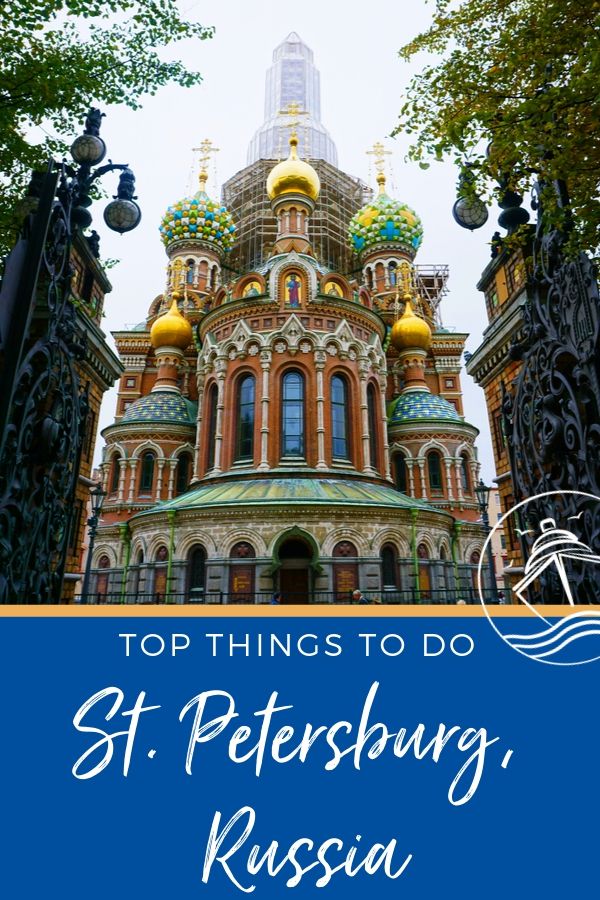 Heidi is a physical therapist by profession, cruise enthusiast at heart, and Princess all the time! She is a self-confessed thrill seeker, obsessive planner, and over-packer. She is always looking for the latest and greatest adventures onboard and ashore, enjoys researching top things to do in ports of call, and loves dressing up for formal nights.
Heidi
Previous Post « Exclusive First Look at Virgin Voyages Cabins
Next Post Why We Are Excited to Sail on Norwegian Encore »