We have the latest look at the hottest show on NCL's new ship in our exclusive Norwegian Bliss Happy Hour Prohibition - The Musical review. 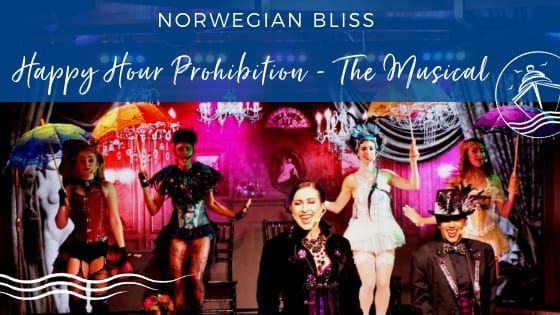 While Norwegian Bliss is home to many well-known bars and lounges, there is one you will not find listed in your Freestyle Daily. This hidden gem is Mahogany Hall. Never heard of it? Well, then you do not know about the best kept secret on the ship, Happy Hour Prohibition – The Musical.

On several nights of your cruise, the Social Comedy club is transformed into this self-proclaimed “classiest, illegal joint in New Orleans”. For a cover charge, cruisers can reserve a coveted seat in this famed Storyville speakeasy. 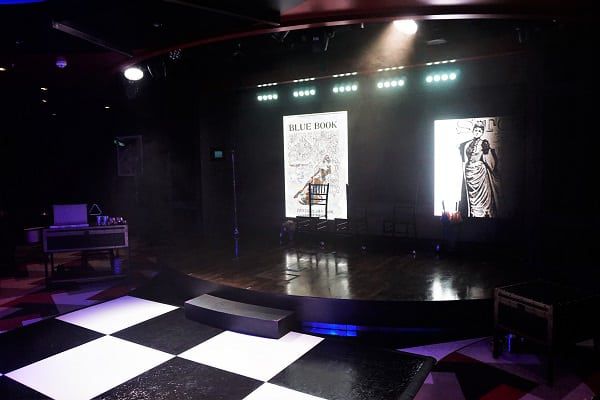 On our recent cruise, we were lucky enough to get seats to this highly selective show. We are back to dish all of the dirty little details in our review of Norwegian Bliss Happy Hour Prohibition – The Musical.

Happy Hour Prohibition – The Musical is a one of a kind interactive experience that is exclusive to Norwegian Bliss.

Once you step through the doors of the Social Comedy club, you will be transported to the eve of Prohibition. The theming starts right away with waitstaff in their early 20th-century attire passing out your first drink of the night, a Moscow Mule. 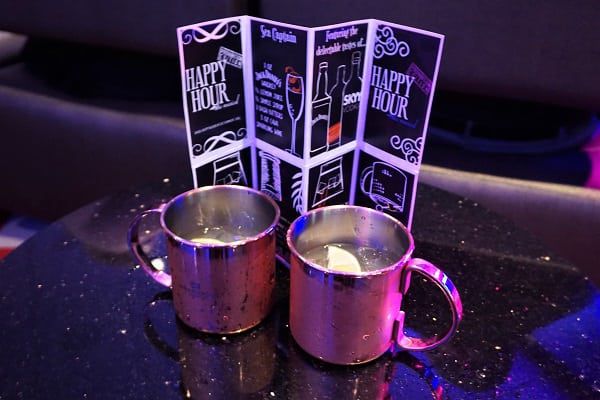 Right before the show begins, the lovely ladies of Mahogany Hall begin making the rounds. Interacting with guests, the seductive singers and dancers are in full character. Once you begin chatting with one of these beauties, you realize this show will be unlike any other cruise ship show.

This one-hour production is a playful performance during which the all-female cast tantalizes the audience with a sultry mix of music, dance, and comedy. These scantily clad starlets, each with her own set of special assets, are certainly easy… on the eyes. 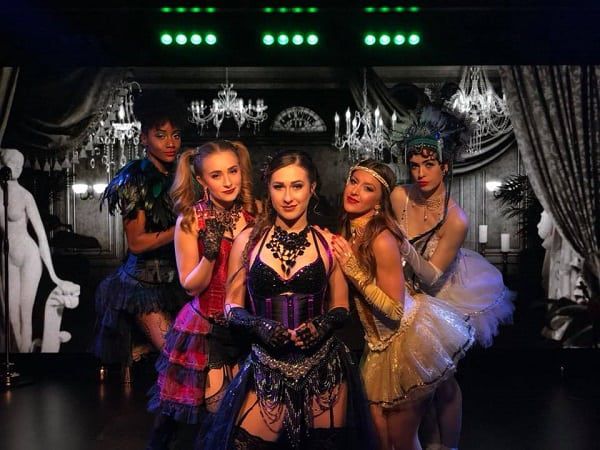 The night starts off with the sexy Bessie Bourbon who welcomes you to the show. Before long, the stage lights up with the other famed females strutting their stuff to some infectious jazz tunes.

You will be spell-bound by all of Miss Lulu’s girls, including Fleur de Lis, the fiery ringmaster of Storyville and the graceful Le Cygne, the Hall’s resident ballerina. Not to mention, there is also the show-stopping Parisian, Imogen, whose is looking for someone to ring her bells.

Just don’t get too frisky with Madam White’s girls as the ever-vigilant bouncer, Mr. Mac, is there to keep you and the ladies in line during the evening.

Things could get out of hand quickly! You have entered Madam Lulu’s underground watering-hole on the eve of Prohibition. So, the bar has no choice but to dispose of all its liquor before the end of the night.

This is where the audience can help. As part of your cover charge, all patrons receive five classic cocktails including the Moscow Mule, Old Fashioned, the HHP Mint Julep, Whiskey Sour, and the Sea Captain.

It is hard to know where the scripted show ends and the improvisation begins, as the ladies of the house interact with various members of the audience trying to solicit both men and women to “go upstairs” with them.  No matter how rambunctious the audience, the girls of Mahogany Hall have certainly heard and seen it all.

If you are lucky enough to be chosen by one of Miss Lulu’s Girls, you will be swept away for an unforgettable finale. This show-stopping number will have the audience laughing and cheering along.

With just the right amount of theming and innuendo, this well-timed and exquisitely performed show will have you begging for more. Unfortunately though, like all good things, the show must come to an end.

Norwegian Bliss’ Happy Hour Prohibition -The Musical has a cover charge of $29.95 (plus 20% service charge). On our cruise, the show was offered on two separate nights, with a 7:30 pm and 10:00 pm show. All shows were sold out by the first day.

Currently, you can not make reservations for the show pre-cruise. To book your tickets, you will want to head to Q Texas Smokehouse on the first day of your cruise to secure your seats for this very exclusive production, as well as other entertainment reservations. 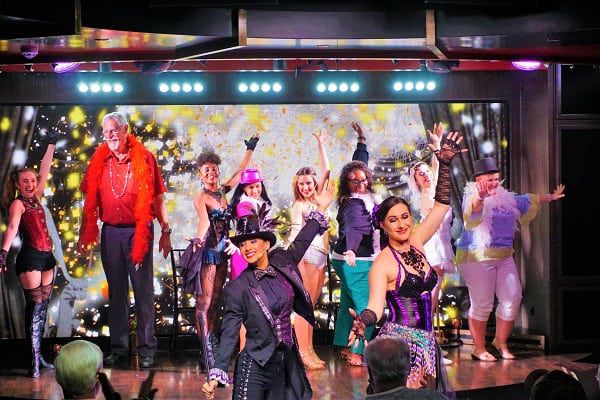 Happy Hour Prohibition – The Musical is rated PG 16. While the show is intended for mature audiences, the crowd during our performance included adult cruisers of all ages who were game for a little cheeky fun. If you are a bit shy, we suggest sitting towards the back of the venue. The girls of Mahogany Hall are quite fond of interacting with cruisers toward the front of the room.

Before you are officially kicked out, there is even some limited time at the end of the show to mingle and snap a selfie with Madam Lulu!

While different than the Cirque Dreams performances on the Breakaway-class of ships, we enjoyed this new concept. Eliminating the meal, the themed drinks are a nice touch. However, since the show was originally priced at $19.95, we feel the new cover charge is a bit steep, especially considering many cruisers already have the Ultimate Beverage Package. 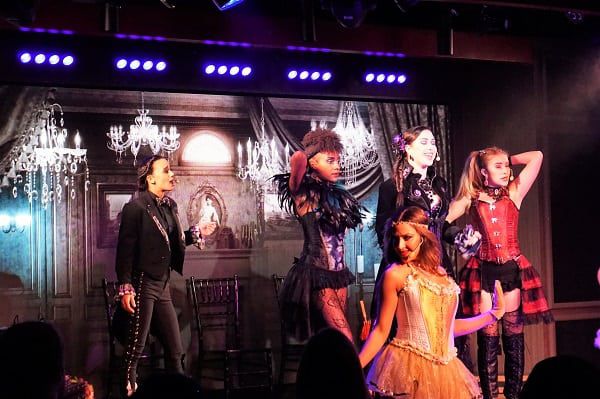 Still, this one-of-a-kind musical production is certainly one you don’t want to overlook when cruising on Norwegian Bliss. So, grab some friends who are ready for a bit of a risqué evening. Then join Madam Lulu and her girls of Mahogany Hall to toast to “the end of the world”.

The only password you need for this speakeasy is fun!

Have you snuck into Happy Hour Prohibition – The Musical on Norwegian Bliss? Did you like the performance? Drop us an anchor below with your thoughts on this new show. 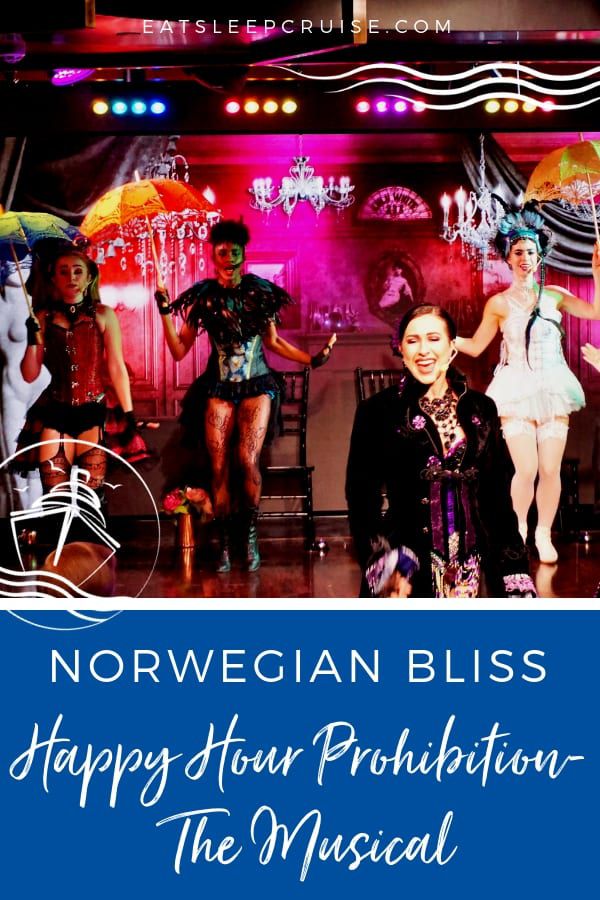 Don Bucolo, or “DB”, loves everything about cruising- the ocean, the food, and the atmosphere. While he may be obsessed with doing extensive amounts of research on ships and all elements of a cruise, Don enjoys sharing his new found knowledge with fellow cruisers. When he is not sailing the high seas, he does whatever his wife tells him to do-it only took 10 years to realize this.
Don
Previous Post « Norwegian Bliss Balcony Stateroom Review
Next Post Norwegian Bliss Specialty Dining Package Review »