If you are cruising to Germany and plan to head to Berlin, we give you our list of the Top Things to See on a Berlin Highlights Tour. 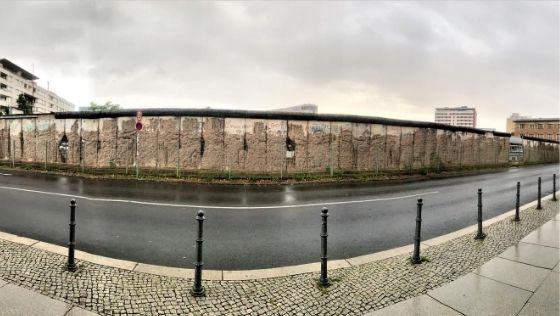 If you are taking a cruise that includes a stop in Germany, your cruise ship will most likely be docking in Warnemunde. This port of call is located on the Baltic Sea. While there are many wonderful places to visit in close proximity including the town of Rostock, many cruisers will want to make the trek to the country’s capital of Berlin.

Keep in mind that this journey is about 2.5 to 3 hours each way. This cruise excursion will be 12+ hours but will offer plenty of time for sightseeing, either on your own or as part of an organized tour. If you are planning to make the trip, we give you our list of the Top Things to See on a Berlin Highlights Tour while on a cruise.

Top Things to See on a Berlin Highlights Tour

This 27-mile wall that separated East and West Berlin measured in at 12 feet tall and four feet wide. Its reinforced concrete was intended to halt passage from East Germany between 1961 and 1989.

Today, sections of the Wall remain throughout the city as a reminder of freedom and democracy. Therefore, it is certainly one of the top things to see on a Berlin Highlights tour. There are many places to view remnants of the Wall throughout the city. The East Side Gallery is a mural exhibit painted on the longest intact part of the wall.

There is also a stretch of the wall located onsite of the Topography of Terror exhibition.

This landmark was the third border crossing point at the Berlin Wall. Today, a replica checkpoint booth and museum are found on the original site. Checkpoint Charlie has become a popular tourist attraction with several open-air exhibits in the area detailing escape attempts, its significance during the Cold War, and more.

Located in the Allied Museum, you can find the original Checkpoint Charlie guardhouse in addition to other important historical artifacts.

The Brandenburg Gate is an 18th century neoclassical monument in Berlin. It is one of the most popular landmarks in Germany. Thus, it tops our list of things to see on a Berlin Highlights tour.

The site of a former city gate that divided East and West Berlin, the Brandenburg Gate has now become a symbol of unity. Visitors used to climb to the observation tower to get a glimpse behind the Iron Curtain. Also, it was here that President Reagan issued his famous “Mr. Gorbachov – tear down this wall!” speech on June 12, 1987.

Situated just north of the Brandenburg Gate is the Reichstag Building. The Reichstag is the current home of the German Parliament and a symbol of democracy. This building is steeped in history, all while the political decisions of tomorrow are still being made. It is also a lovely example of modern architecture with its famous glass dome. Visitors can take a ride to the top of the building to enjoy the vistas from a large viewing platform.

The Holocaust Memorial, also referred to as the Memorial to the Murdered Jews of Europe, is located on the former site of the Berlin Wall. Designed by architect Peter Eisenman, the memorial consists of 2711 concrete slabs of varying heights.

This impressive memorial is captivating and immersive. It also allows visitors to pay tribute to the Jewish victims of the Holocaust. So, it is certainly another top site on a Berlin Highlights tour.

Fuhrerbunker was an air raid shelter and part of an underground bunker complex. It became the residence of Hitler and the “headquarters” of the Nazi regime. It was also the location where he married Eva Braun less than 40 hours before they committed suicide. Much of this complex was destroyed during the reconstruction of Berlin. The site remained unmarked until 2006 when a small plaque was installed.

Related Post: What You Need to Know Before Taking a Viking Ocean Cruise

Gendermentmarkt is a 17th century square that is said to be the most beautiful public square in Berlin. It is the site of the Berlin Concert Hall and the French and German Cathedrals each with its own architectural charm.

Today, the two “churches” house museum exhibitions. This square is also home to a statue of poet Friedrich Schiller, street music, and a lively Christmas Market during the season.

A short walk from Gendermentmarkt is Belbelplatz another large square in the center of Berlin. It is bound to the east by the State Opera House and to the west by buildings of Humboldt University. To the southeast is St. Hedwig’s Cathedral.

Bebelplatz is also home to the Book Burning Memorial. An underground memorial by Micha Ullmann reminds visitors of the organized Nazi book-burning event. It consists of a glass plate set into the cobblestone, giving a view of empty bookcases.

Potsdamer Platz is a newly redesigned square that marks the point where the old road from Potsdam passed through the city wall of Berlin at the Potsdam Gate. During construction of the Berlin Wall, Potsdamer Platz became part of the border zone and nearly all buildings in this “no man’s land” were torn down.

Since reunification, this wasteland has become a completely new neighborhood with lively restaurants, shopping, greenspaces, and modern architecture.

Alexanderplatz is yet another popular public square of Berlin. Here, you can see the Nikolai Quarter, where the city of Berlin was founded.

The Red Town Hall, the current seat of the city’s government, and the TV tower (Fernsehturm) are also located in this square. The TV tower was originally a symbol of communist power but later became an iconic city landmark. With its height of 368 meters, it is the tallest structure in Germany.

Tiergarten Park is Berlin’s most popular inner-city park, similar to NYC’s Central Park. This park is not only a pleasant greenspace but is also home to many memorials and monuments, including the Soviet War Memorial. Here, you can also find the Victory Column, a landmark that celebrates the military successes of Prussia.

Museum Island is the name of the northern half of an island in the Spree River that is home to five world-renowned museums. All of these museums are part of the Berlin State Museums. In 1999, the Museum Island complex was named a UNESCO World Heritage site.

The Protestant Berlin Cathedral on Museum Island is Berlin’s largest church. It is also one of the the most iconic places of worship in Berlin. Berlin Cathedral (Berliner Dom) was completed in 1905 and is adorned with a prominent green-colored copper dome. Inside, you will want to view the striking marble altar, the organ, the Imperial Staircase, and the crypt below. You can even climb to the top for an amazing view of the city.

Ku’damm is Germany’s most famous shopping boulevard. Some even consider it the Champs-Élysées of Berlin with many high-end shops, hotels, and restaurants. It begins at Kaiser Wilhelm Memorial Church, which commemorates Berlin’s determination to rebuild after the war. It is comprised of the ruins from the former church damaged in the air raids as well as a modern church building. Since the Ku’damm is a bit further west than most of the major sightseeing attractions, Friedrichstrasse is east Berlin’s main shopping street.

Located on one of Berlin’s main boulevards Unter den Linden, the Neue Wache Memorial pays tribute to the victims of war and dictatorship. In the center of the memorial is the striking statue Mother with her Dead Son by Käthe Kollwitz. The sculpture is directly under the oculus and so exposed to Berlin’s climate. This feature symbolizes the suffering of civilians during World War II.

Charlottenburg Palace is the largest palace in Berlin. It was built at the end of the 17th century and greatly expanded during the 18th century. It was named in honor of the Prussian Queen Sophie Charlotte who died at only 36 years old.

Today, it is open to the public to explore the palace and the gardens. The palace includes lavish decoration in both baroque and rococo styles, an impressive display of the remaining Prussian crown jewels, a collection of the finest porcelain, and much more.

The Topography of Terror Museum sits on the site of Nazi regime buildings including the SS Reich Main Security Office and the headquarters of the Gestapo. The museum includes information stations directly where the crimes were planned allowing visitors to gain perspective on this former Nazi “Terror Center”. The site also contains a surviving section of the Berlin Wall.

The New Synagogue, along with the Jewish Museum and the Holocaust memorial, is one of Berlin’s most significant Jewish landmarks. Built in 1866, it was the largest Jewish place of worship in Germany and a symbol of the thriving Jewish community. The building was badly damaged during WWII. The front portion has since been reconstructed and is now home to the Jewish Center.

One of the oldest preserved buildings on Unter den Linden, the Royal Armoury is regarded as one of the most beautiful baroque buildings in Germany. It was originally built as a weapons’ arsenal but now houses the German Historical Museum. This museum showcases German history spanning from the Middle Ages to present day. The building includes four wings, a large inner courtyard, and a new extension opened in 2003.

The Jewish Museum in Berlin opened in 2001 and is the largest Jewish museum in Europe. It consists of three buildings, two of which are new additions specifically built for the museum by architect Daniel Libeskind. The museum houses a large collection of German-Jewish culture and history. It is one of the most visited museums in Germany.

We were able to visit several of these sights on a tour booked with a local tour operator, Original Berlin Walks. We would highly recommend the Discover Berlin Tour for first time visitors to the city. The tour gave us a good overview of the city and introduction to many popular landmarks and attractions.

Have you visited Berlin, Germany on a Cruise? What are some of your top things to see on a Berlin Highlights Tour? Drop us an anchor below to share your experiences visiting this historical city.

Heidi is a physical therapist by profession, cruise enthusiast at heart, and Princess all the time! She is a self-confessed thrill seeker, obsessive planner, and over-packer. She is always looking for the latest and greatest adventures onboard and ashore, enjoys researching top things to do in ports of call, and loves dressing up for formal nights.
Heidi Bucolo
Previous Post « 12 Easy Tips: How to Not Gain Weight on a Cruise
Next Post Expert Tips for Booking the Perfect Shore Excursions »

Top Things to See on a Berlin Highlights Tour 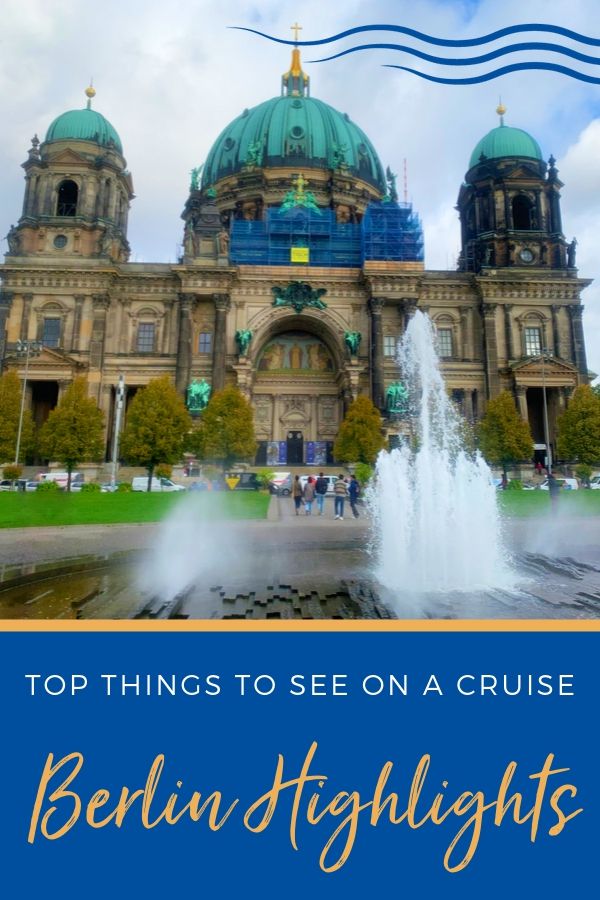