Want to escape to the Polynesian? Well, you can catch a glimpse of these exotic locales without evening leaving the United States. At the Mai Kai restaurant in Ft. Lauderdale, Florida, you will be transported 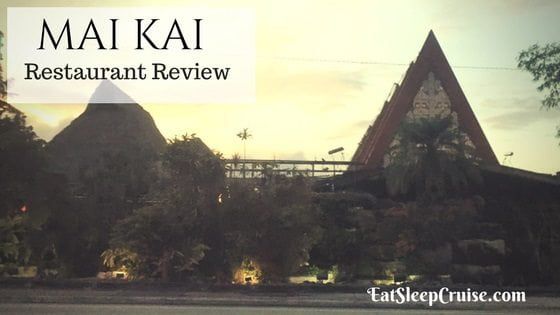 Want to escape to the Polynesian? Well, you can catch a glimpse of these exotic locales without evening leaving the United States. At the Mai Kai restaurant in Ft. Lauderdale, Florida, you will be transported to the lands of Hawaii, New Zealand, and other South Pacific islands in a dinner and revue show that is popular among locals and tourists. A wonderful pre-cruise stop for those sailing from Port Everglades, we recently took in the sights, sounds, and food at this Ft. Lauderdale landmark. Of course, we documented every morsel of our experience in this Mai Kai Restaurant Review.

Regularly rated as one of the best things to do in Fort Lauderadale, the Princess and I decided that we would make reservations for dinner at the Mai Kai Restaurant the evening before we were scheduled to set sail on Harmony of the Seas. Both fans of “Asian-American” cuisine, and wanting to try something different during our pre-cruise stay, this dinner and revue show was an easy choice. You can make reservations online through Open Table or by calling the restaurant directly. Confirming the show schedule for Friday night (which you can find here), we booked a table for 6pm, so we would have time to enjoy our meal before the start of the show. 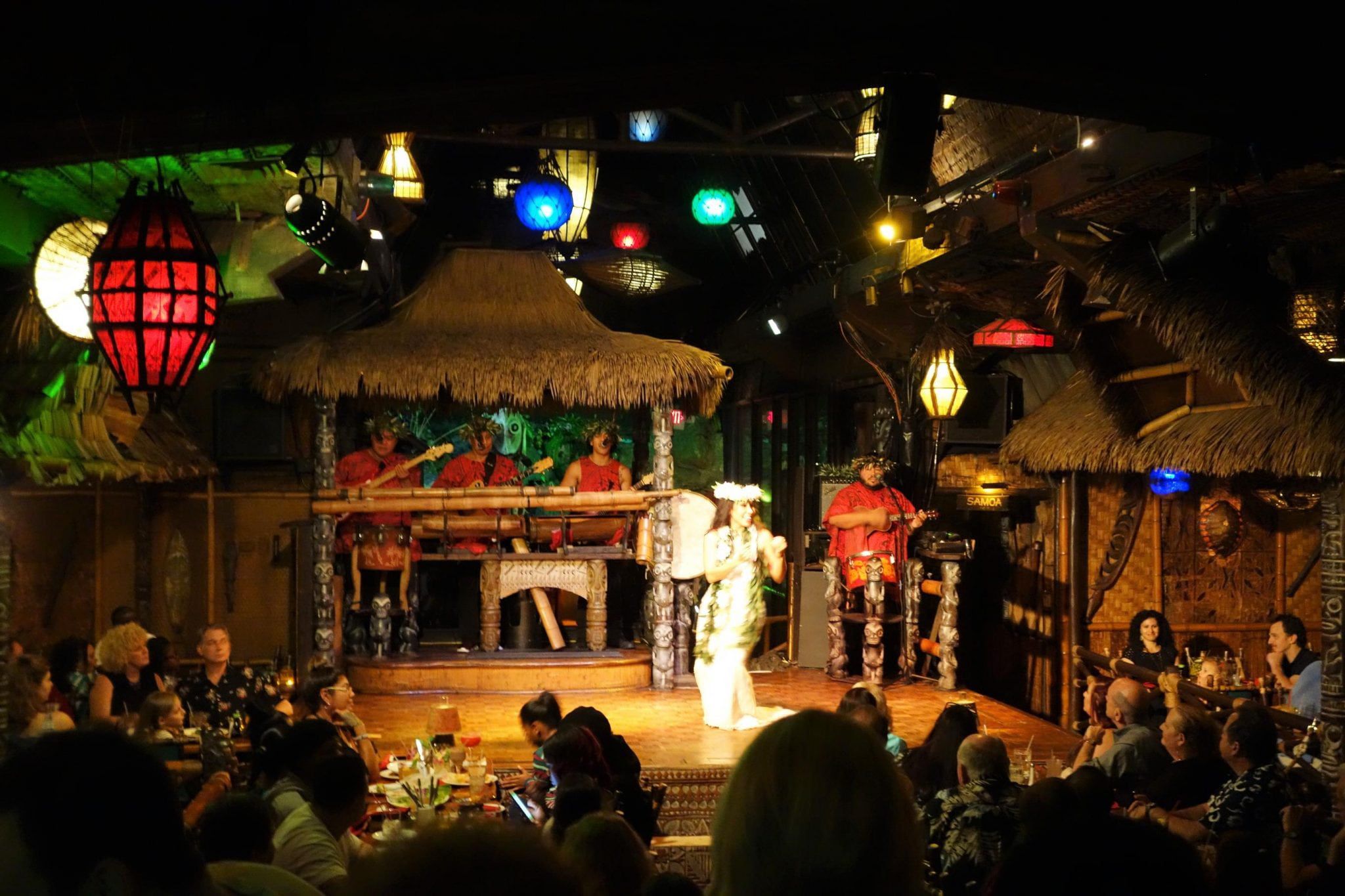 Staying at the W Fort Lauderdale right on the beach, it was about a 15 minute Uber ride from our hotel. For those staying closer to the cruise port, the trip is likely to take you around 25 minutes. Don’t worry, the extra travel time is worth it. 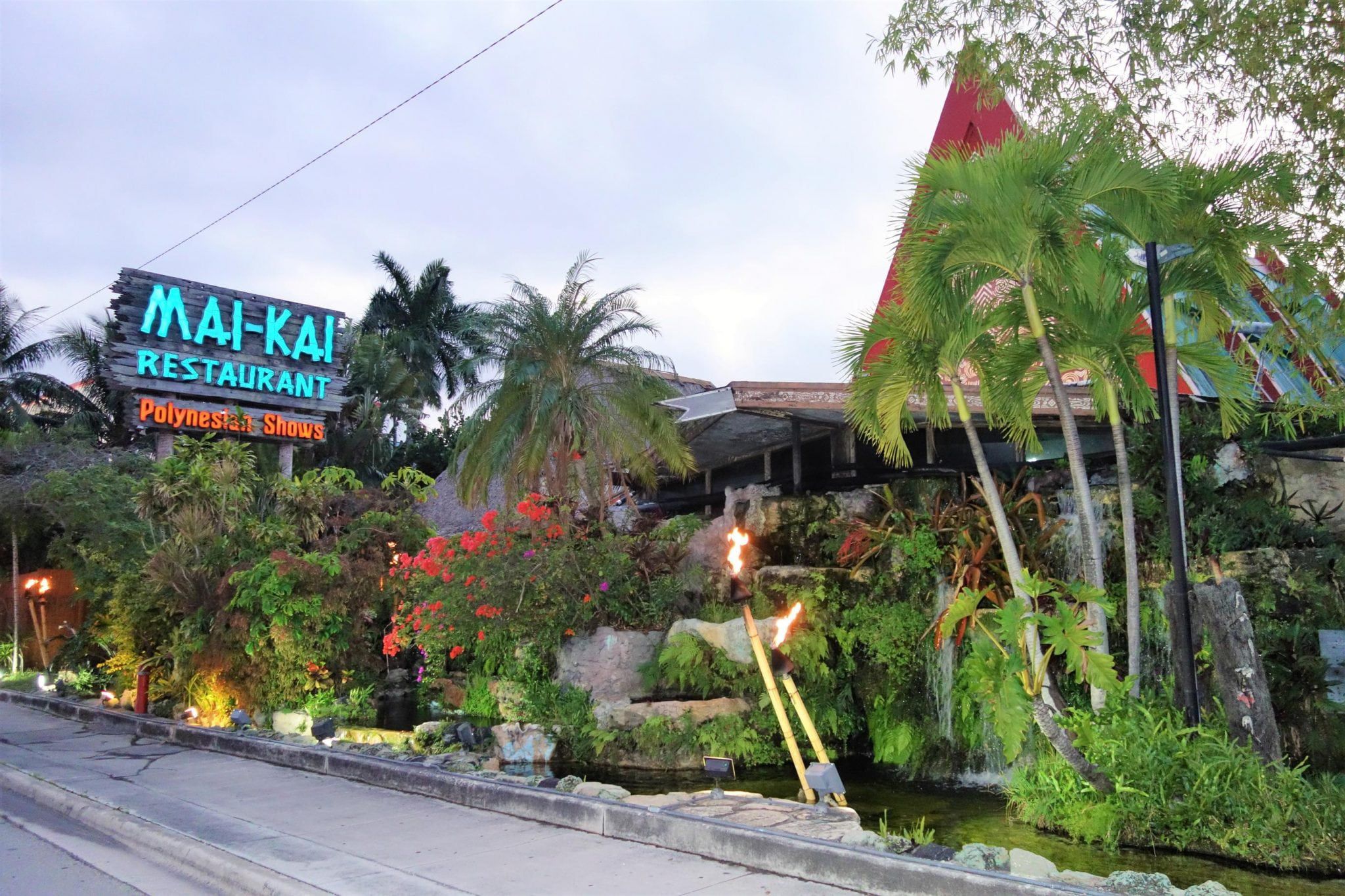 You can not miss the restaurant when you pull up! The massive exterior looks like a slice of a Polynesian island was picked up, carried half way around the world, and dropped into the middle of U.S 1. Plants, waterfalls, and rock formations appear to be growing over the dark tiki wood building that houses the restaurant. Arriving a few minutes early, I decided to sneak into the busy road to try to capture the ambiance.

For those who decide to drive, there is a charge for parking. On the weekends, you are required to use valet which is quoted at $10. Upon entering the restaurant, the decor and styling continued throughout the venue with plenty of dark wood, bamboo thatching, and various artifacts scattered through the restaurant. The theming might be slightly over the top, or as I like to think of it, quasi-cultural, but fun nonetheless. 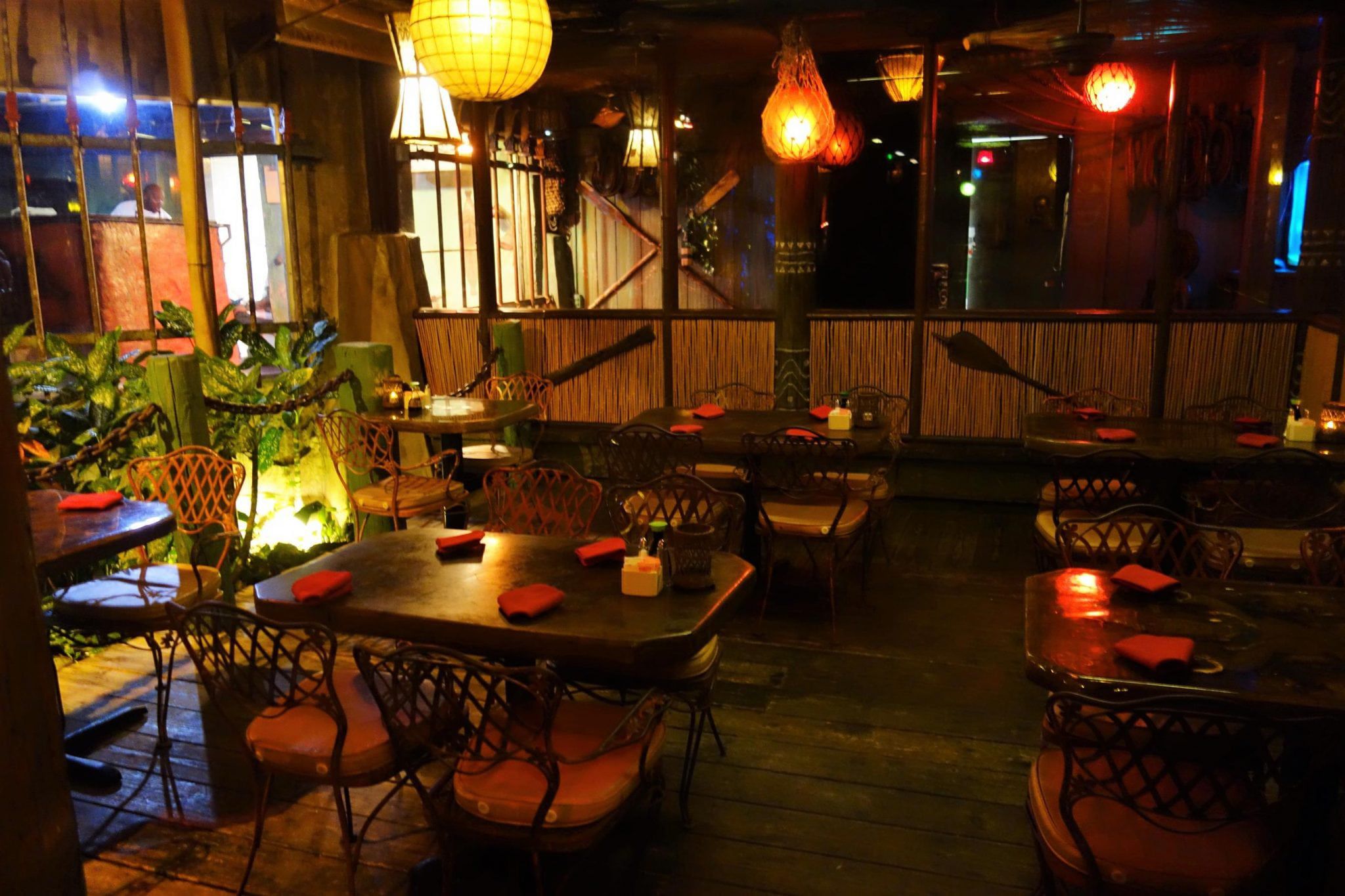 Checking in with a hostess, we were quickly sat on a elevated floor in the Tonga room (Each section of the restaurant is named after a South Pacific Island.). There are several dining rooms, and even outdoor seating, but those areas do not have a view of the show. While we were there to eat and be entertained, our table of two had a pretty good view. As more individuals arrived, part of our view was eventually blocked. We suggest you try to get a table in one of the sections on the main floor closer the stage.

The Princess always complains that I need to bring my glasses when we go out to dinner, so I can read the menu. This time was no different. Given that the restaurant was quite dark, I had to break out the cell phone flash light to review the massive drink menu. Our waitress arrived to take our order, and you know I had to get one of the “Strong Drinks”, the Barrel of Rum, whereas the Princess went with a “Medium Drink”, the Tahitian Breeze. With the drinks arriving, and our sampling complete, I had to admit that her cocktail was a more refreshing option. Although, my mug was pretty cool. 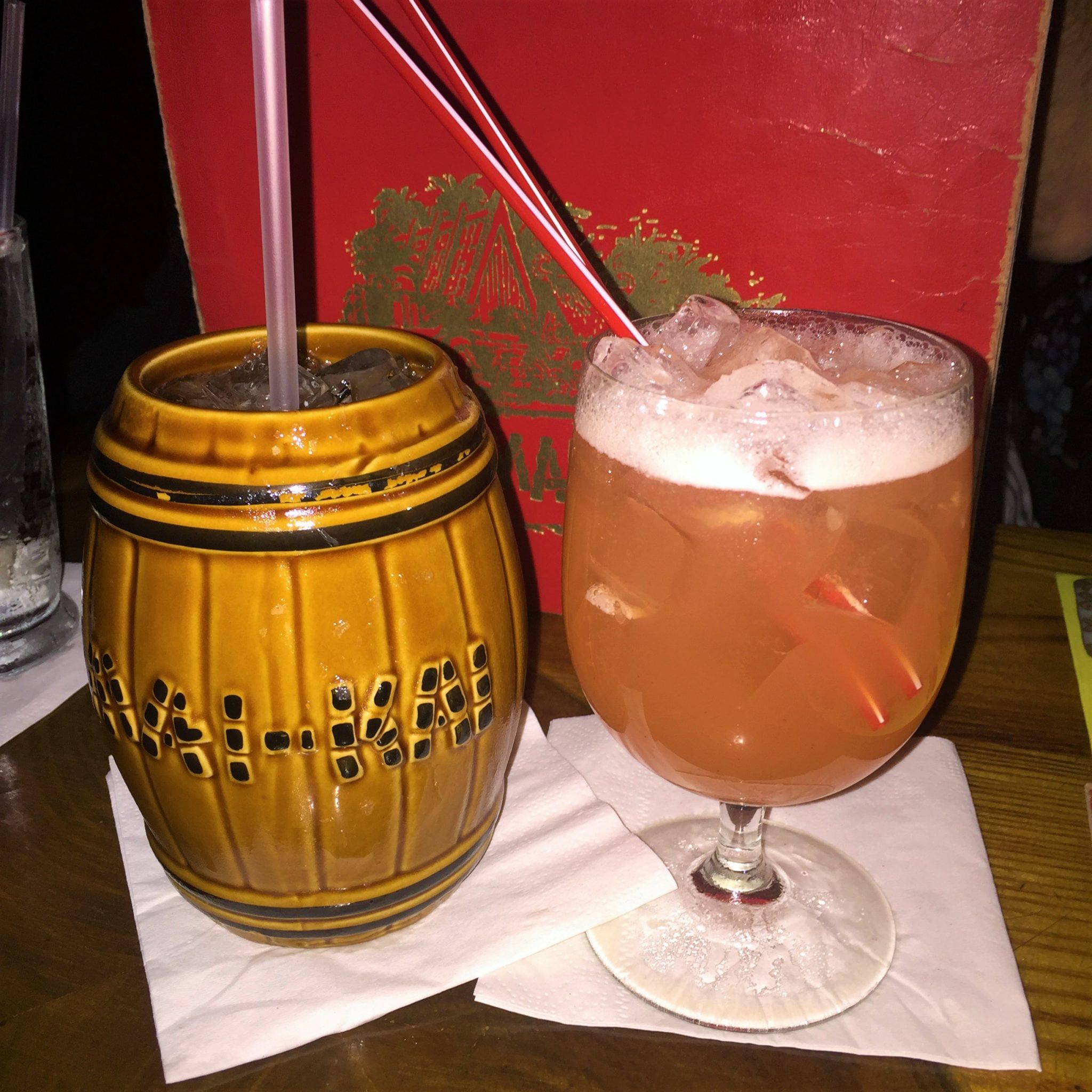 The restaurant serves both an a la care menu as well as the pre fixe menu known as the Bali Hai Menu, which is a flat $47 including a three course meal and the cost of the show. If you opt for the a la carte menu, the show is a $15 charge per person. Before making reservations, we had reviewed the menus online and knew we wanted to try the special menu. Inquiring with our waitress, she was happy to bring the menu, but did confirm that they only offer the menu “upon request”.

Given the size of the restaurant and the number of diners that all arrived at a relatively similar time, the service was a bit slow, but our servers were friendly. We took the extra time to enjoy our drinks and make a few posts on social media. 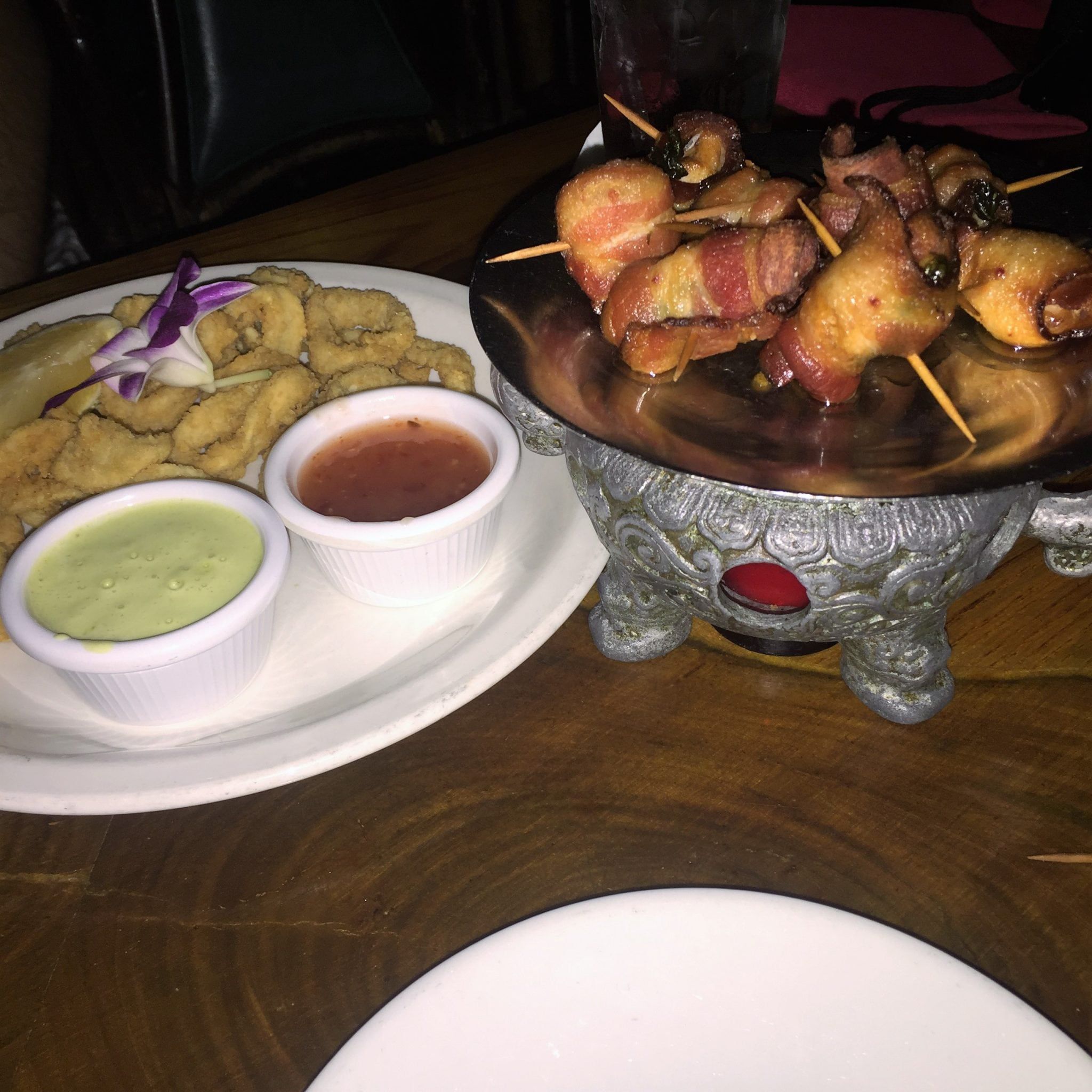 Ordering from the pre fixe menu, my first course was the Crispy Calamari. The squid was warm and crispy but just a tad overcooked. It came with two dipping sauces, a traditional cocktail sauce and another tangy, yogurt based sauce. You probably guessed it, the Princess ordered the Shanghai Chicken, which was a solid portion. In the name of blog research, I had to try one or two. You simply can’t go wrong wrapping anything in bacon!

While it took a while for our starters to arrive, it felt like our entrees were delivered shortly after our plates were cleared. Before getting our meals, we did put in a second drink order, a signature Mai Tai and a Mai Kai Swizzle. 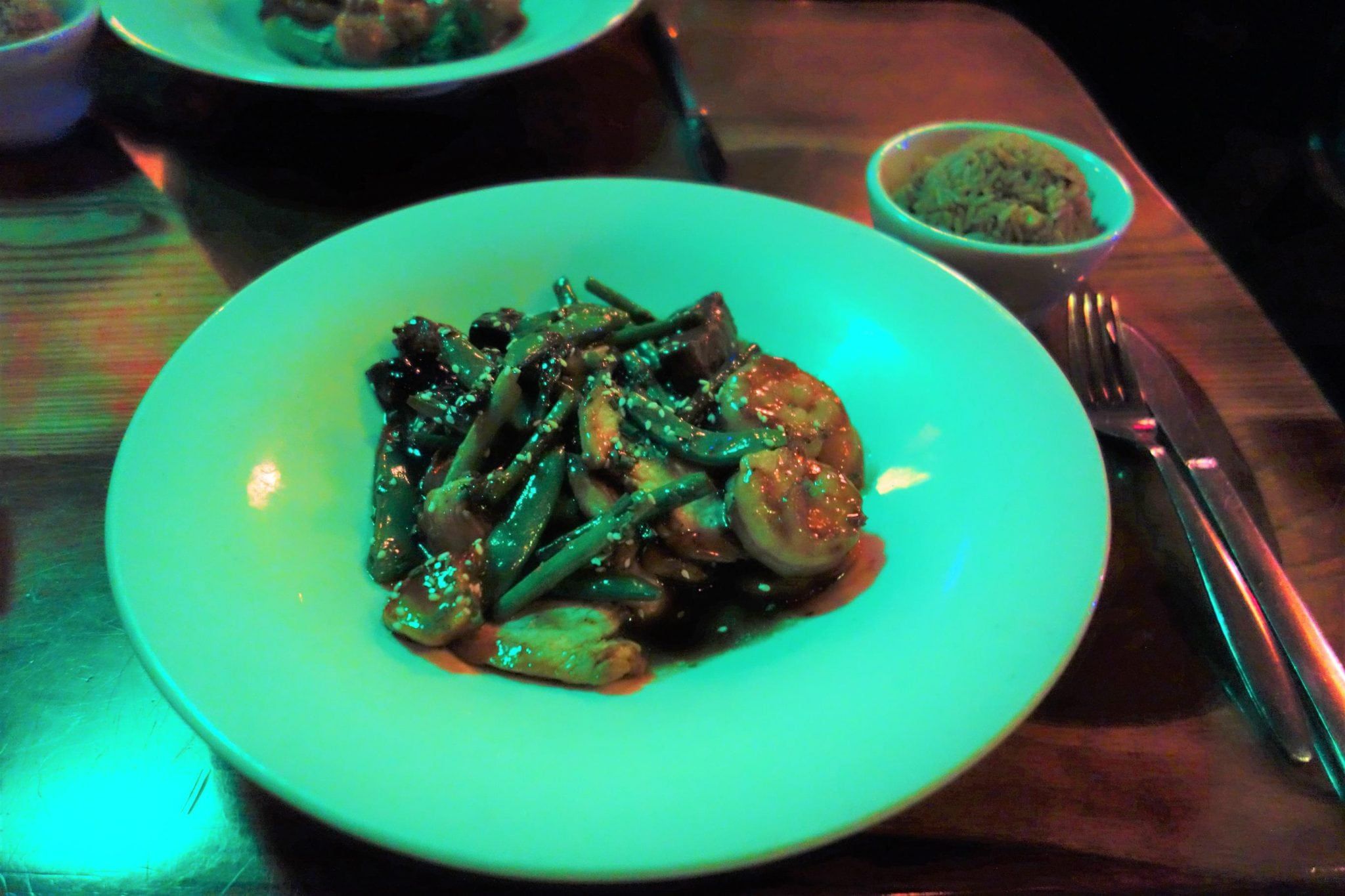 We were both pleased with our entrees. I did the Teriyaki Combo, a generous portion of beef, chicken, and shrimp, pan fried and perfectly tossed in a sauce with just the right combination of salty and sweet. Predictable as ever, the Princess went with the Mai Kai Honey Chicken. A sweet sauce coated the chicken which was stir fried with a light coating and paired with a cup of fried rice.

The Show At Mai Kai Restaurant

Dinner wrapped up just in time for the show. In fact, our dessert of frozen yogurt was served just as the show was starting. Dimming the lights even more, if that was possible, the performers emerged on the stage to begin that evening’s performance.

The longest running Polynesian show in the United States, the Mai Kai revue show has been transporting travelers to the South Pacific for 55 years. Owner Mireille Thornton, a native of Tahiti, is responsible for updating the show’s choreography and costumes to express authentic village life and the culture’s heritage. The show takes places on an elevated stage in the middle of the restaurant and includes a band and a troupe of male and female dancers. 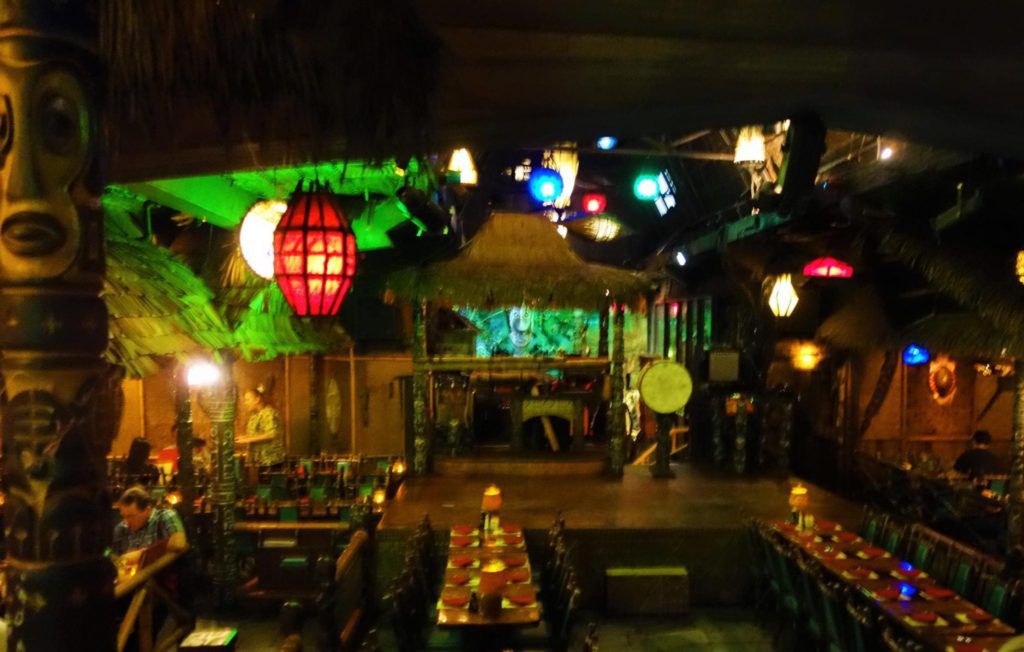 The show began as the hostess from New Zealand emerged on the stage. She narrated the entire production and was our guide through this musical and rhythmical passage to the various islands of the French Polynesian. Every set included an introduction of the dance style, the country of origin, and its significance in that culture. Lasting about an hour, the production included several interpretations from locales including Hawaii, Tahiti, Samoa, and New Zealand. 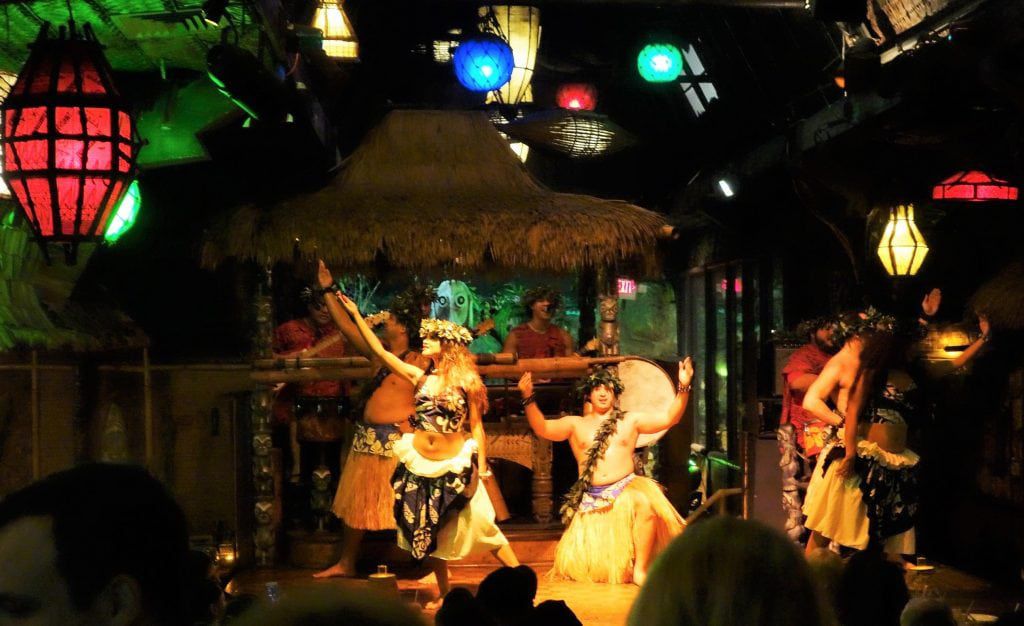 As the music played and the dancers swayed to the rhythm of the drums, we tried our best to take some pictures. Given our location, and the swift motion of the performers, it was not an easy task. For us, the most impressive act was the fire jugglers, near the end of the performance. Yes kids, do not try this at home! A very engaging performance, and certainly one that is “enhanced” by the cocktails and food, the entire experience culminated around 8:30pm. 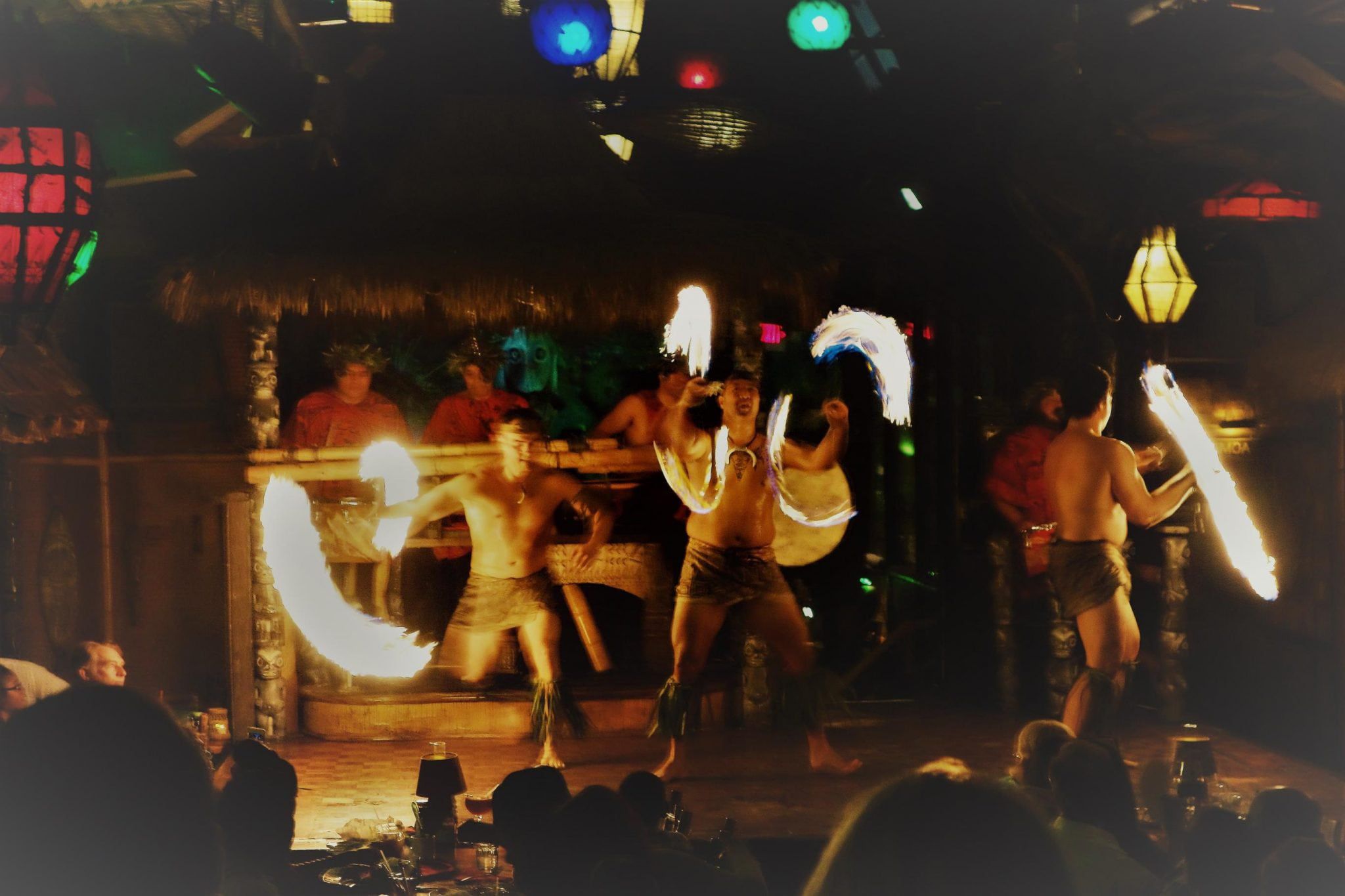 With a few minutes to spare, as the restaurant does not being seating for the next show until 9:00pm, we surveyed the gardens and other areas of the restaurant, which continue the South Pacific theme including lush floral arrangements, blazing tiki torches, and Polynesian statue replicas. The gardens are a perfect place to stroll as you finish your drink and add to the aura of this one of a kind restaurant. After taking a few photos, we requested an Uber to bring us back to our hotel. We contemplated grabbing another drink at the bar, but it was packed, and we were exhausted from our day of travel. 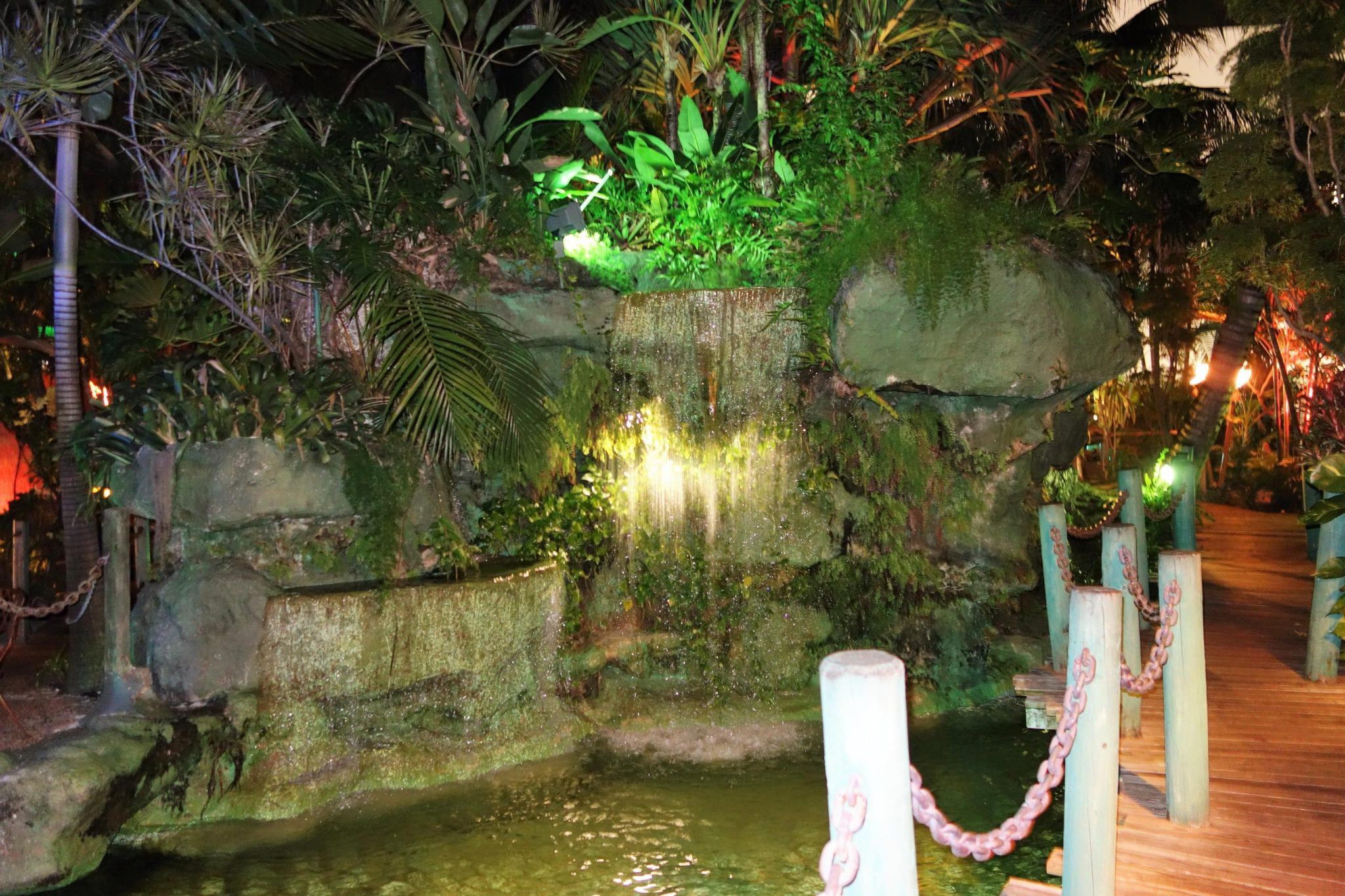 Whether you are traveling with your kids, as a couple, or in a large group, Mai Kai Restaurant is an experience any cruiser should try at least once before or after their cruise vacation. The variety of drinks and dining options make the restaurant worthy of a visit as the food was satisfying and reasonably priced. We found the show entertaining as well with a great mix of music and dancing. 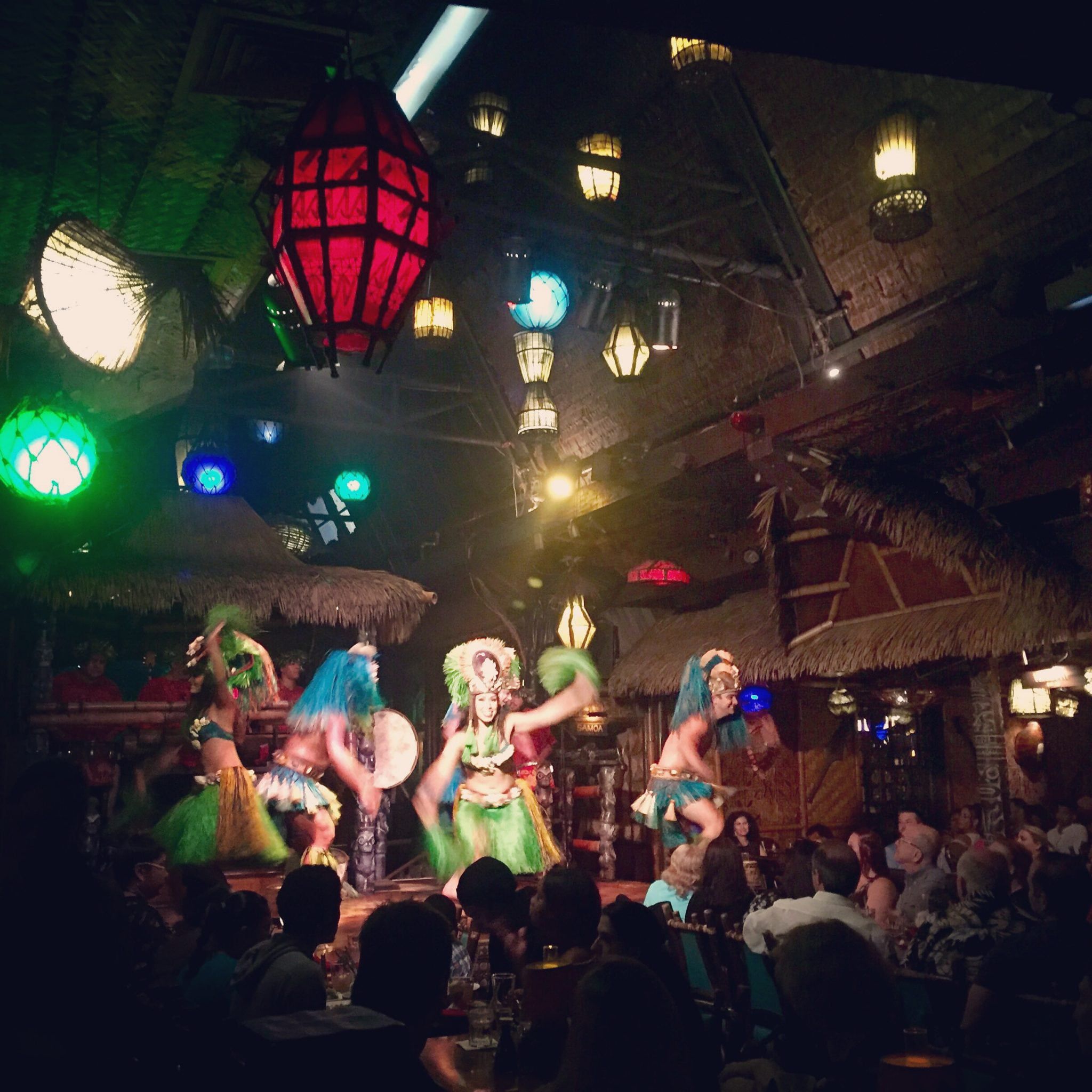 I am not sure that I would say it was a culturally immersive experience, but the dancing, costumes, and fire jugglers are something you do not see everyday. We would recommend the dinner and revue show to those looking for something to do in Fort Lauderdale the evening before their cruise. Or, you could even take advantage of the cocktail hour in the bar, from 5pm to 7pm, with half priced drinks and appetizers. That right there is worth the short trip to the far away place that is the Mai Kai Restaurant.

Have you dined at Mai Kai Restaurant? Where are your favorite places to dine when cruising from Fort Lauderdale? Drop us an anchor below to share your pre-cruise rituals with fellow cruisers. 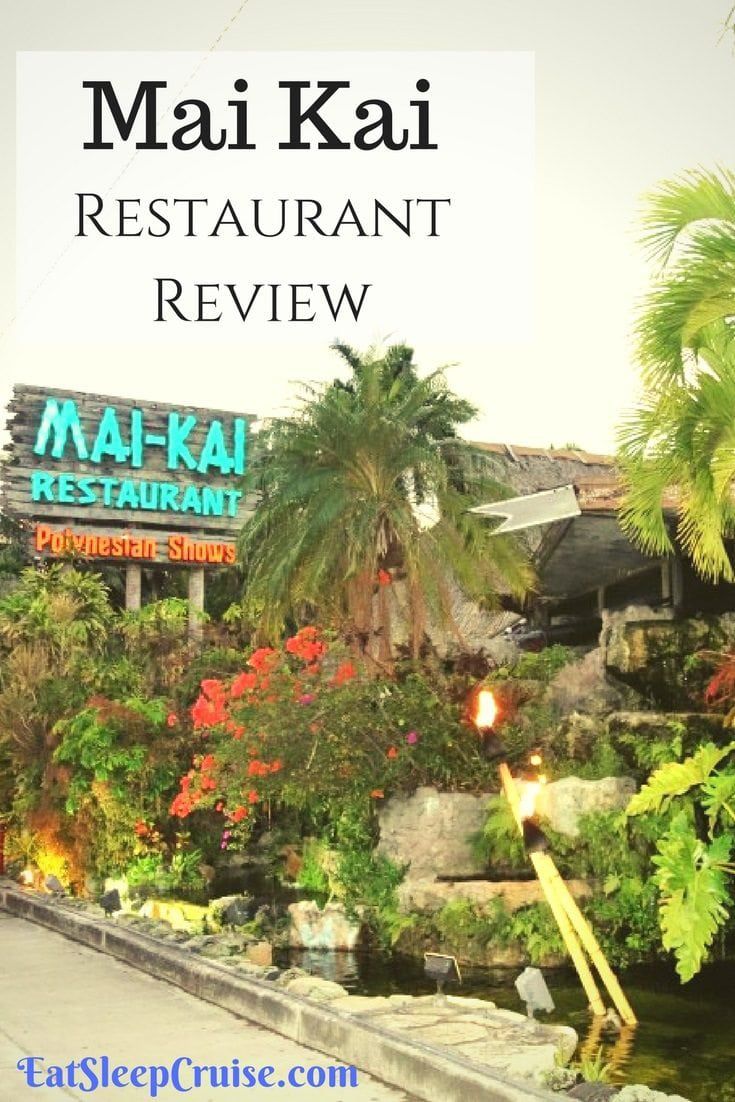 Don Bucolo, or “DB”, loves everything about cruising- the ocean, the food, and the atmosphere. While he may be obsessed with doing extensive amounts of research on ships and all elements of a cruise, Don enjoys sharing his new found knowledge with fellow cruisers. When he is not sailing the high seas, he does whatever his wife tells him to do-it only took 10 years to realize this.
Don
Previous Post « Norwegian Getaway Western Caribbean Cruise Review
Next Post Cruise News April 9, 2017 »