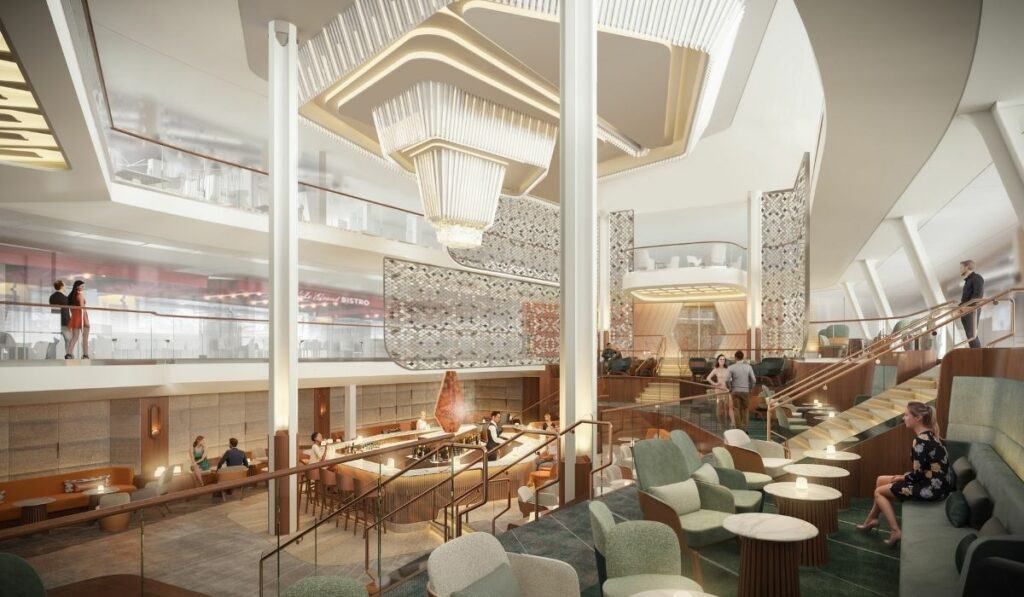 Celebrity Cruises Is Putting It All On The Table

New-Luxury Brand Set To Take Culinary Excellence To The Next Level On Board Exquisite, Celebrity Beyond

MIAMI (September 29, 2021) – With a Michelin-starred chef, one of the world’s most famous interior designers and globally-inspired cuisine and cocktails, the culinary experience on board Celebrity Cruises latest ship Celebrity Beyond is set to be “without comparison,” Celebrity Cruises Lisa Lutoff-Perlo, the company’s President and CEO announced today.

Unveiling the dining experience guests can expect on Celebrity Beyond, Lutoff-Perlo also announced a number of showstopping partnerships and collaborations that are set to confirm the new-luxury ship’s status as the most exciting culinary experience at sea.

The company confirmed an extended partnership with the brilliant, double Michelin-starred Daniel Boulud, a spectacular collaboration with interior designer Nate Berkus, and a new concept with alcohol industry giants, Diageo.

What guests can expect

“Globally-inspired culinary excellence is at the heart of our offering on board all Celebrity Cruises ships. On any vacation, some of your most treasured memories come straight from the dining table you share with friends and family. It matters to us that every aspect of our guest’s onboard experience is truly special. We have always put so much attention into our food and drinks, and it has paid off with numerous awards including prestigious recognition from Wine Spectator for setting the standard at sea,” said Lutoff-Perlo. “Now, we have partnered with the most extraordinary talent to put it all ‘on the table’ and create a complete experience without comparison.”

“On Celebrity Beyond, alone, we are proud to welcome more than 300 talented chefs from over 30 countries, ensuring we can offer truly global cuisine throughout our stunning collection of new-luxury venues,” said Chef Cornelius Gallagher, Celebrity Cruises Vice President of Food and Beverage and a Michelin-starred chef in his own right. “Combined with the remarkable talents of Chef Boulud, I know our guests will taste the difference.”

In total, there will be 32 food and beverage experiences on board Celebrity Beyond, including 15 restaurants, five cafes and 12 bars and lounges.

Exclusive to Celebrity Beyond will be Le Voyage, created by the world-renowned chef and Celebrity Cruises’ Global Culinary Ambassador Daniel Boulud. The venue is his first signature restaurant at sea, and just as the name implies, travel is the inspiration for Chef Daniel’s incomparable dishes. Globally- inspired flavors will be infused into his menus, transporting guests to the very places that inspired each dish.

From the moment guests step inside Le Voyage by Daniel Boulud, their experience will be so much more than a meal. The ambience of the restaurant is a result of Jouin Manku’s creative talents — the team responsible for designing the Jules Verne restaurant in the Eiffel Tower as well as Celebrity’s extraordinary Grand Plaza, located at the heart of the ship and featuring a stunning chandelier creating different atmosphere experiences from day to night.

For Le Voyage by Daniel Boulud, the aesthetic will be intimate and upscale, featuring soft tones, private banquette seating with textured and graphically lit glass flutes that create an inviting warm glow, and a dedicated entrance and exit creating a one-of-a-kind culinary experience. As a final touch, guests receive a farewell gift at the end of their experience.

Renowned interior designer Nate Berkus has continued his partnership with Celebrity Cruises, designing the globally influenced two-story Sunset Bar on the aft of Celebrity Beyond.

Working in collaboration with architect Tom Wright of WKK, best-known as the designer of the Burj Al Arab hotel in Dubai, the space is nearly twice as large as previous iterations with unobstructed views. Inspired by the very best of summer days around the world, from Mexico and California, to Greece and Uruguay, Berkus worked to create a casual yet elegant beach club vibe.

Featuring two open-air decks and a pergola covered entrance, guests can pull up to a u-shaped bar or settle under the cool shade of plush daybed niches, in this upscale space that combines elegance and relaxation.

*Clink* Craft Cocktails Abound on Board Celebrity Beyond

Celebrity Beyond’s World Class Bar will boast expert mixologists crafting bespoke cocktails for all tastes, while ensuring that the spectacle of making each drink is just as exciting as drinking them. The venue comes in partnership with Diageo, one of the world’s largest producers of spirits and beers, bringing much-beloved beverage brands from across the spirit spectrum to Celebrity Cruises’ bars.

Celebrity Cruises’ heritage is deeply rooted in Greece, having been founded by a Greek family in 1988 and with 70% of current marine officers across the fleet hailing from the country. In a nod to this continued tradition, Celebrity has collaborated with Chicago interior design firm Simeone Deary to give its Cyprus Restaurant a fresh new look. Cyprus is a fleet favorite on board Celebrity’s Edge Series® ships, but visitors on Celebrity Beyond will be greeted by a brand-new heavenly ambience that perfectly combines delicate, airy elements with brilliant gold, sculptural accents, taking inspiration from Aphrodite, the Greek goddess of love and beauty.

Revered British interior designer Kelly Hoppen CBE has been tapped to bring a new, fresh and luxurious aesthetic to several venues onboard Celebrity Beyond including the Rooftop Garden’s Rooftop Grill, the inviting, piazza-inspired Cafe al Bacio and the popular Mast Bar on the ship’s Resort Deck. All three spaces have been expanded and re-designed with an upscale, resort-like aura.

The third ship in Celebrity’s industry-transforming “new luxury” Edge Series, Celebrity Beyond stands at 17 decks high and 21 meters longer than her innovative predecessors Celebrity EdgeⓇ(2018) and Celebrity ApexSM(2020), making her the largest ship in the Celebrity fleet. Every element of Celebrity Beyond’s look and feel has been carefully curated with newly imagined spaces and expanded versions of the brand’s popular signature spaces, including:

Like her industry-changing sister ships, Celebrity Edge and Celebrity Apex, both of which have been  named one of TIME Magazine’s “World’s Greatest Places” following her 2018 debut season, Celebrity Beyond will connect guests to the breath-taking world around them like never before. The ship’s onboard and onshore experiences stand it apart as a new-luxury travel brand without comparison.

Celebrity Beyond will depart on her maiden voyage on April 27, 2022, from Southampton, England on a 10-night Western Europe cruise visiting Bordeaux, France; Lisbon, Portugal; and Seville, Malaga, Palma de Mallorca and Barcelona, Spain. She will then offer a variety of Mediterranean journeys including nine-night Italian Riviera and France itineraries and 10-night Greek Isles itineraries through early October, when she then heads to the Caribbean.Voyages are now on sale.

For more information on the ship and to book the vacation of a lifetime, visit www.celebritycruises.com/cruise-ships/celebrity-beyond or contact a trusted travel advisor.

What do you think of the news that Celebrity Cruises reveals more details of Celebrity Beyond’s dining? Do you have plans to cruise on this new ship when it debuts? Drop us an anchor below to share your thoughts on this latest reveal.

Heidi is a physical therapist by profession, cruise enthusiast at heart, and Princess all the time! She is a self-confessed thrill seeker, obsessive planner, and over-packer. She is always looking for the latest and greatest adventures onboard and ashore, enjoys researching top things to do in ports of call, and loves dressing up for formal nights.
Heidi
Previous Post « Tracy Arm Fjord and Glacier Explorer Excursion Review
Next Post Atlas Ocean Voyages Offers Complete Peace of Mind With Atlas Assurance »