Home » Top 10 Things to Do on Jewel of The Seas

Blog reader and fellow cruiser, Mark Goepfert, is back with this week’s guest post on the Top 10 Things to Do on Jewel of the Seas. From fabulous views to unique onboard amenities, find out 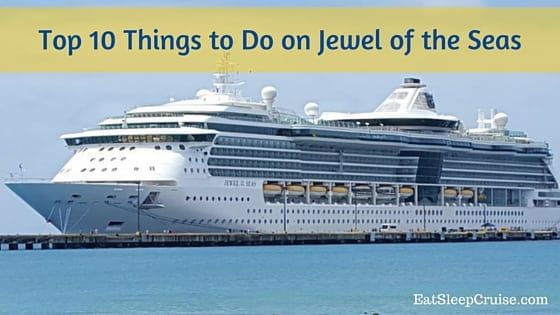 Blog reader and fellow cruiser, Mark Goepfert, is back with this week’s guest post on the Top 10 Things to Do on Jewel of the Seas. Thanks again Mark for another great post!

We recently sailed on Royal Caribbean’s Jewel of the Seas for the second time. The Jewel will always hold a fond place in our hearts as she was our first cruise (for our 25th Anniversary) in October 2014. We sailed out of San Juan, Puerto Rico on a port-intensive, seven-night Southern Caribbean voyage that included stops in Barbados, St. Lucia, Antigua, St. Maarten, and St. Croix. 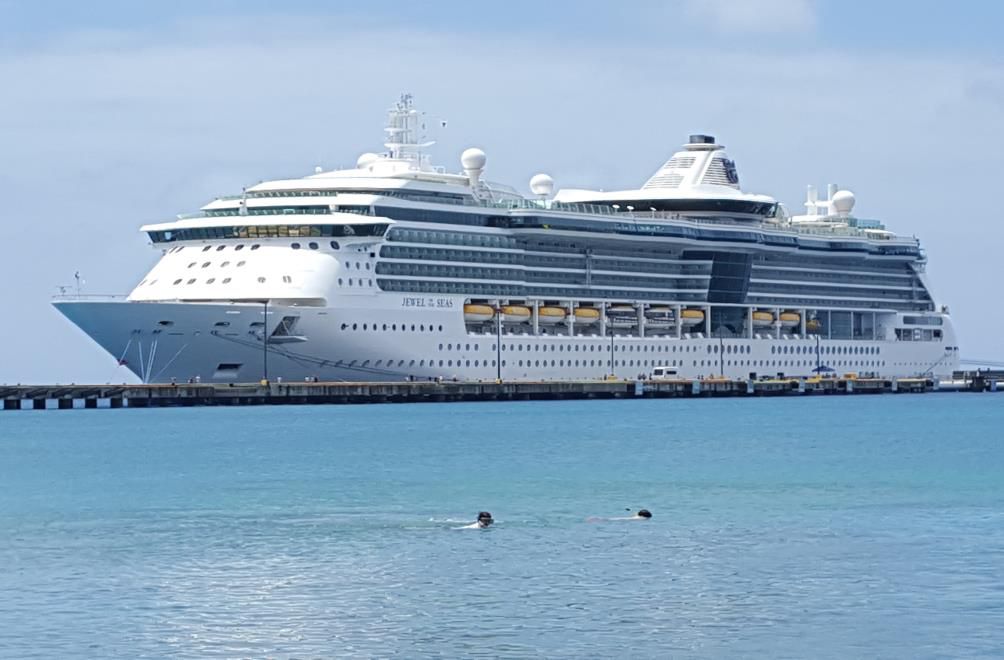 Top 10 Things to Do on Jewel of the Seas

The Jewel is one of four Radiance-class ships and is much smaller than Royal’s newer megaships, at only 2,400 passengers and 90,000 tons. This size gives the ship a much more intimate feel, and it is best known for its abundance of glass and ever–present ocean views. Here are what we would recommend as the Top 10 Things to Do on Jewel of the Seas.

Top 10 Things to Do on Jewel of the Seas

Not all ships provide an outdoor seating area, but the Jewel sure has one gem of a spot – at the rear of the ship as part of the Windjammer Buffet. It is covered yet still open-air and not only are the 270-degree views phenomenal, but not many passengers are aware of its existence. This fact makes it less noisy and generally less crowded as well. We found it a wonderful place to enjoy a relaxing meal, particularly on sea days. Also, it is open all hours that the buffet is open. How many cruise ships are so connected with the water that you can even enjoy ocean views while on your way to the pool deck or your favorite restaurant? The Jewel of the Seas, and all her sisters, enjoy this wonderful perspective that few others can boast. This feature of the Radiance class ships is definitely one of the Top 10 Things to Do on Jewel of the Seas. Top Things to Do on Jewel of the Seas – Ocean Views

Check out the Self-leveling Pool Tables

These tables each employ gyroscopes which keep them leveled at all times. It becomes very entertaining to watch when the ship is moving – at times, the tables almost appear possessed! Others who were not familiar with this technology thought that someone was using a remote control to antagonize them…clearly a unique feature we’ve never seen on other cruise ships. Top Things to Do on Jewel of the Seas – Pool Tables

Attend the Silent Party in the Vortex Night Club

This is one party that is not to be missed. Each person in the club is given wireless headphones with several different music channels. There is a DJ playing music for each channel – you simply pick which one you want to listen to and dance while singing along to the music. There is nothing being played over the club’s speakers – hence, the “silent” part of the party. This party can be extremely entertaining to watch, so I made a a short video that you may enjoy.

Enjoy Sail Away from the Helipad

Weather permitting, this area is generally open to the public and typically offers magnificent views for port departures or arrivals. The helipad can be quite windy, so be sure to hold on to your hat. Also, it’s a popular vantage point, so be sure to stake out your favorite spot early. Take a Chance on the Slot Tournament in the Casino Royale

I had seen such tournaments on other ships and thought, “I can do that!” For a minimal entry fee ($25 in this case), you compete against fellow cruisers to see who can score the most points in a set time period. Several qualifying rounds are held and then the top finishers square off in a final round. On our trip, we didn’t have enough registrants (over 100 were needed) to make the top prize- a free cruise on the Oasis for a Tournament of Champions (and a shot at a $100,000 purse!), but we had a spirited bunch that made for an exciting tournament. Beginners luck was clearly on my side as I was able to walk away as the top finisher. The prize only amounted to several hundred dollars, but the excitement and bragging rights (complete with trash-talking!) made it all unforgettable. Top Things to Do on Jewel of the Seas – Slot Tournament

Typically held on sea days (of which we only had one), this comical competition pits some of the Senior Officers against a team of passengers to try their luck. I guess the crew’s legs are so used to the ship’s motion, that they clearly dominated the passengers. Either that or it was the extremely tall and athletic crew member that they situated right in front of the net. It almost seemed like they played together before, many times. Oh wait, they had! It was nonetheless an extremely entertaining match, and I would recommend participating – great fun! Top Things to Do on Jewel of the Seas – Water Volleyball

Enjoy Breakfast on your Balcony while Arriving into a Port

We decided to try room service for breakfast since we had a port intensive cruise and several early excursions booked. By booking this cruise well in advance, we were able to secure a coveted aft balcony. While enjoying our breakfast during our sail in to St. Lucia, we were treated to a bird’s eye view of the Adventure of the Seas following us into port. Not only did the Adventure of the Seas practically play bumper boats with us, but we got to enjoy a phenomenal view of her rotating 180 degrees right before our eyes to park at the pier opposite us. Here’s what our view looked like: 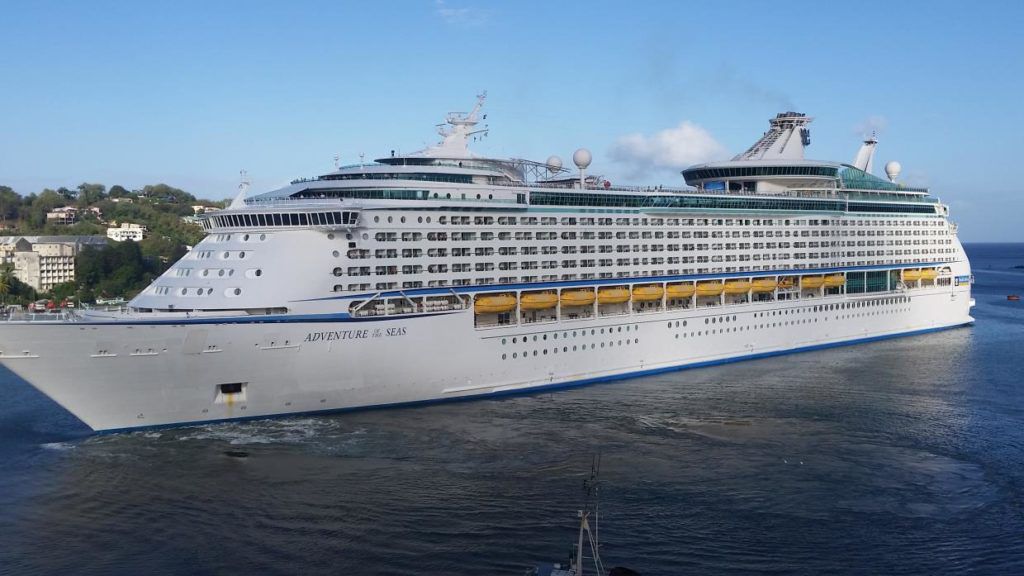 Top Things to Do on Jewel of the Seas – Balcony Views

Dress up for Formal Night and Attend the Captain’s Reception

We always enjoy dressing up for formal night and seeing the other passenger’s dressed up as well. The Jewel  of the Seas seemed to have a greater percentage of its passengers decked out than we’d witnessed on other ships. One of the events that occurs on the first formal night is the Captain’s Reception. On the Jewel, it is held in the very intimate Safari Club. You get to hear a brief history of the ship, the Captain (only in his thirties!) and the Senior Officers. Not to mention, free champagne is distributed to anyone who wants it. Between the champagne flutes and the formal attire, this sure creates a festive atmosphere. The Mrs. and I are shown below dressed for formal night with one of the best room stewards we’ve ever had – Ivan. 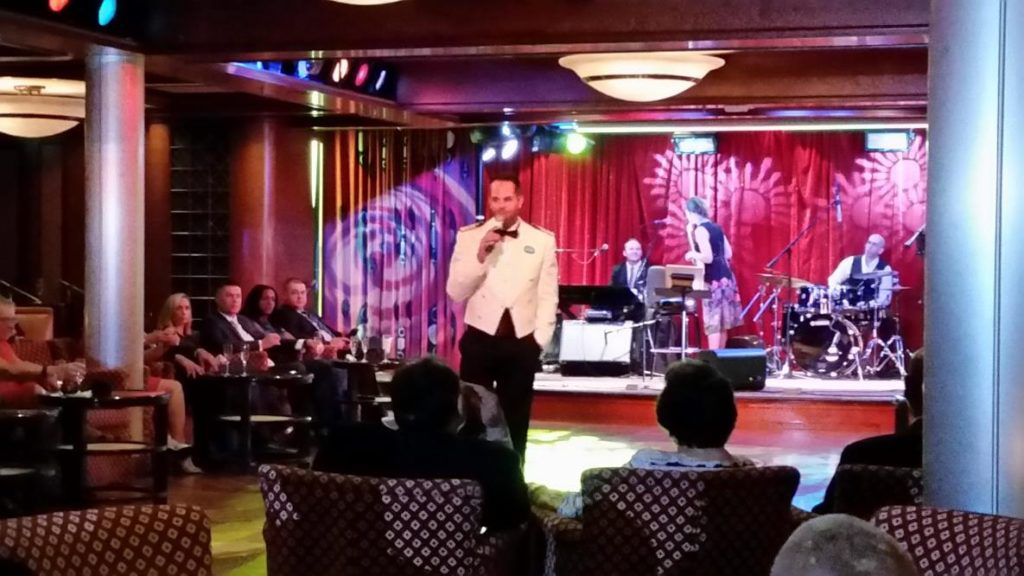 Take in the Ocean Views from the Outdoor Promenade Deck

This is always one of our favorite spots on the ship. Jewel has a magnificent outdoor promenade that circles completely around the ship and provides some of the best ocean views. So grab a chair, sit back with your favorite book, and enjoy one of the best parts of any cruise. 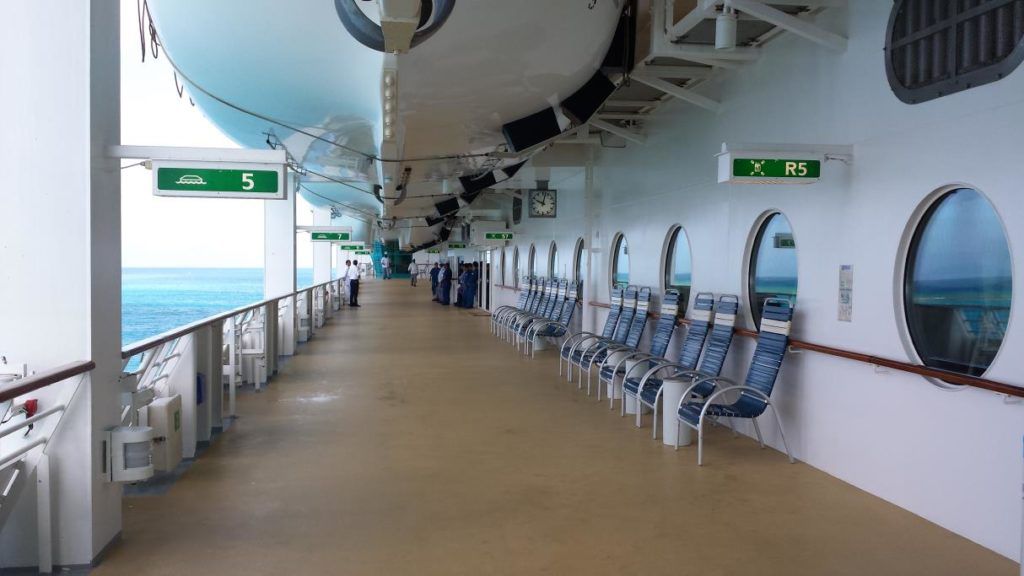 Final Thoughts on Jewel of the Seas

This was our second time on the Jewel, and once again, one of our most enjoyable cruises. Although we enjoy all of the amenities that the larger ships offer, the smaller Radiance class ships like Jewel and her three sisters afford a majestic connection with the sea by way of its breath-taking views. We also felt that the lower passenger count enabled the crew to provide a personal level of service that is truly a pleasure to experience. 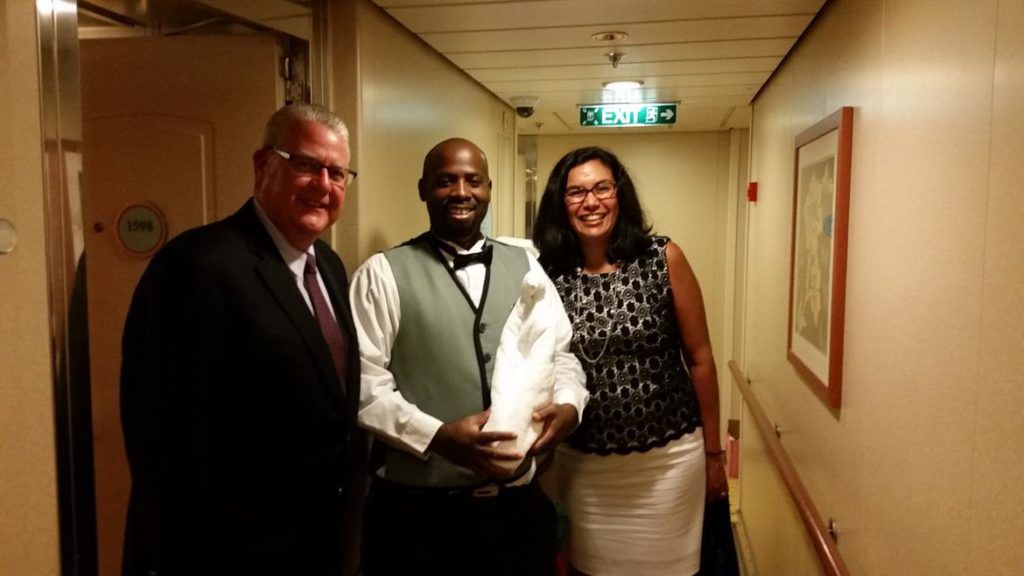 Top Things to Do on Jewel of the Seas

Our next adventure will be at the opposite end of the size spectrum as we endeavor to broaden our cruising horizons and journey on to the Allure of the Seas in October, 2016. We have heard such wonderful things about Royal’s Oasis Class ships that we are compelled to experience them first hand.

I have also prepared a video montage of our recent cruise on Jewel of the Seas. Most of the video footage is dubbed over with music that is quite varied, and I hope you will enjoy it as much as we enjoyed our cruise.

Until then, Bon Voyage!

Have you sailed on Jewel of the Seas or another Radiance class ship? What are your favorite things to do onboard these intimate cruise ships? Drop us an anchor below to help your fellow cruisers make the most of their cruise vacation.

[author] [author_image timthumb=’on’]https://eatsleepcruise.com/wp-content/uploads/2015/12/Mark-G.jpg.optimal.jpg[/author_image] [author_info]Mark is relatively new to cruising. He and his wife Deb went on their first cruise in 2014 on Royal Caribbean’s Jewel of the Seas to celebrate their 25th wedding anniversary. Like many of us before him, he has developed a cruise addiction. Since then, he has been on two other RCI cruises and plans to continue cruising twice a year in the near future. They have done an Eastern, Western and Southern Caribbean routes and future aspirations include eventually sailing to Alaska, The Mediterranean and possibly Hawaii and Australia/New Zealand.[/author_info] [/author] 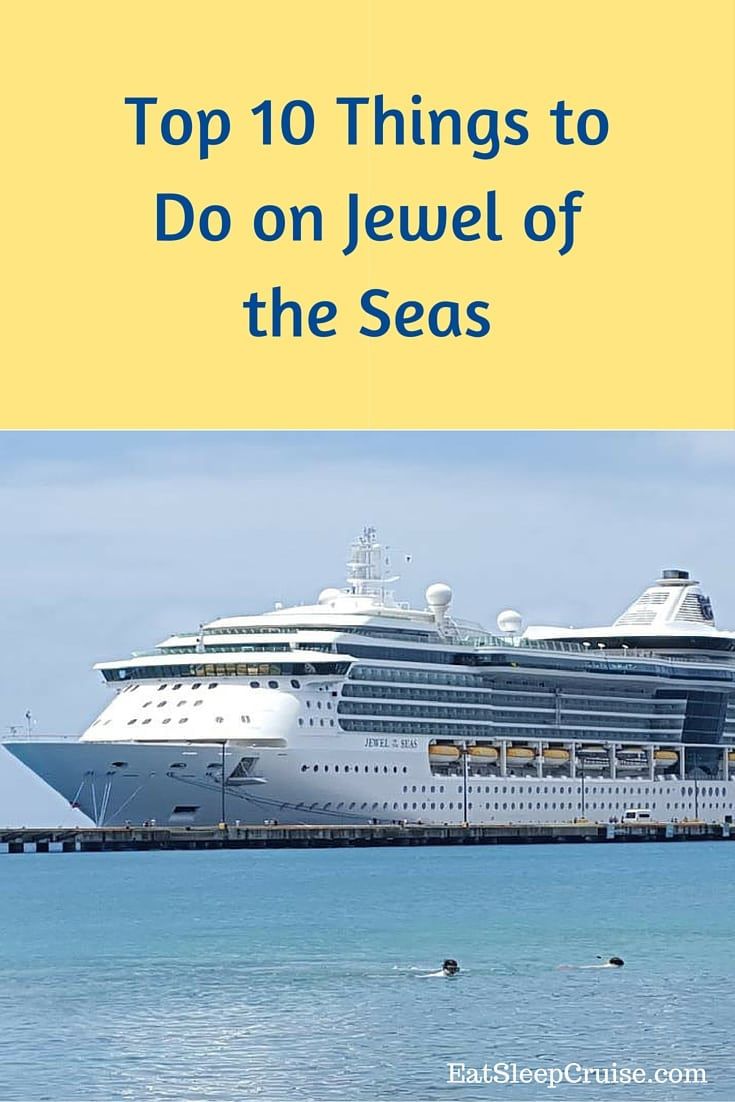 Top 10 Things to Do on Jewel of The Seas