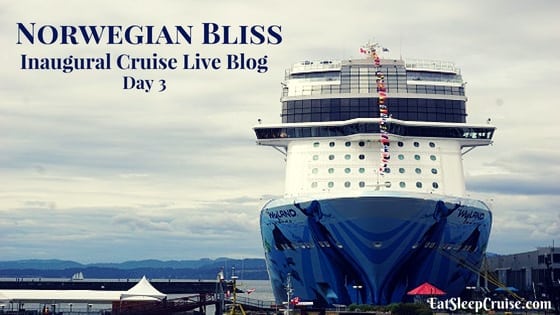 If you haven’t been following along with our live blog, what have you been doing? We spent three unforgettable days onboard Norwegian Bliss during the ship’s inaugural sailing from Seattle, WA. Our third and final day was the icing on the cake for our trip, and we share all the details as they happened right here on our site.

Today, we set the alarm for 6:30 am. The ship was scheduled to dock in Victoria, British Columbia at 8 am. Our partners were hosting an optional whale watching expedition in the morning. We debated whether to attend or stay on the ship but ended up opting to stay on the ship to explore a bit more. Up and out the door by 7 am to get us Starbucks, I captured photos of the ship slowly creeping into the harbor.

Of course, one of the best spots for a perfect view is the Observation Lounge on Deck 15. Here, you can grab a light breakfast and coffee then enjoy the same views as the captain as he navigates the ship. 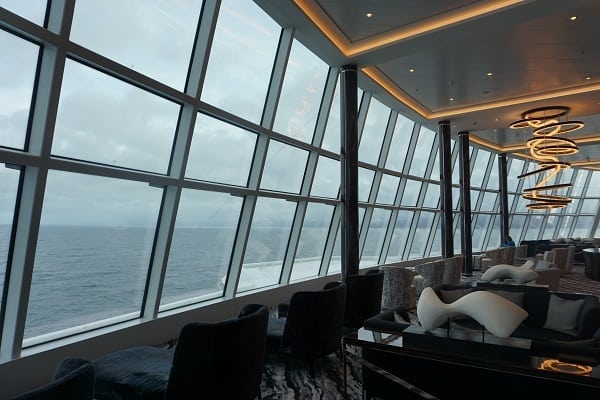 The ship was not cleared until 8:30 am. This announcement was our cue to head to the Observation Lounge where we spent the morning doing a bit of work. Tip: the lamps in the lounge do have USB connections, but it is difficult to find a power source for your laptops.

In between our work, I made some trips to venues like the Thermal Suite and Fitness Center for some remaining photos of the ship’s public spaces. Reviewing the day’s Freestyle Daily, we noted that Los Lobos was going to be open for lunch at 11:30 am. Good thing we only had a few breakfast pastries as we wanted to be among the first people in line at this other new restaurant on the ship. 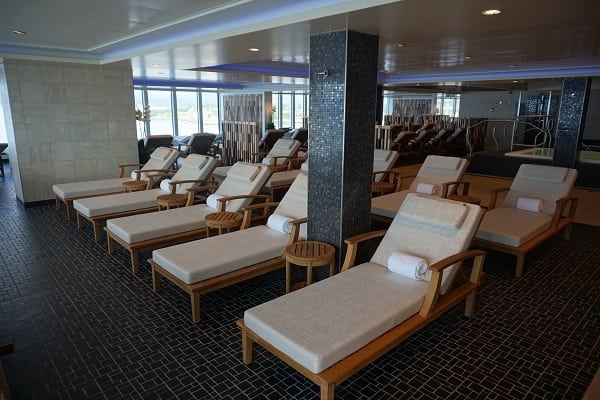 Around 11 am, we dropped off our stuff in the room and took a stroll along the Waterfront as the sun was finally shining. Due to Canadian law, not much was open on the ship. Later, we would learn that the ship was restricted to serving only beer and wine while in port.

Our explorations ended just in time to pop into Los Lobos. This upscale Mexican eatery was already quite busy even though it was not even noon yet. Among the highlights of the meal were the tableside guacamole, chicken quesadillas, and grilled mahi-mahi tacos. We finished lunch a little after 1 pm and decided it was time to get some photos of the ship from the port. 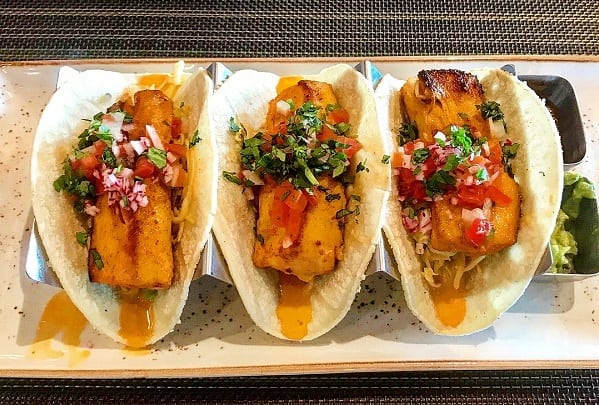 We walked around the ship using the perfectly situated barrier wall. Like many fellow cruisers and residents of the city, we were stopping intermittently to take pictures of the ship with and without ourselves in them.

Back to the ship a little before 3 pm, we grabbed a Starbucks and watched a bit of the painting demonstration by artist Wyland, the mastermind behind the beautiful hull artwork of the ship, that was occurring in the Atrium.

Our next scheduled event was “Margaritaville University” at 5pm. We did a similar class on our trip on Norwegian Getaway. The class took about an hour, with the master mixologists demonstrating how to make three of the signature margaritas served exclusively at Margaritaville. These drinks are covered in the Ultimate Beverage Package. Unfortunately, the class itself is not currently offered for guests though.

Finishing up around 6 pm, it was a quick costume change then down to the Bliss Theater for 6:30 pm for the production show Havana which is new and exclusive to Norwegian Bliss. Like the night before, the theater was relatively empty until the standby line was let in. The sets and costumes for the show were very impressive, and it was a solid performance by the cast even though it was a bit different that we expected. 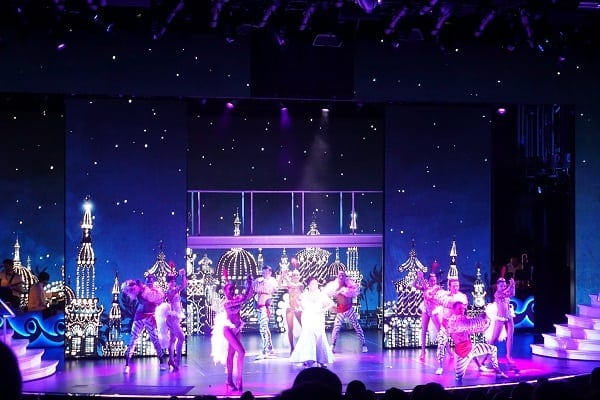 The show’s run time is about 75 minutes, which gave us time to grab drinks at the District Brew House. This craft beer venue serves over a dozen beers on tap, along with 50 other beers and a few select cocktails. We stayed at the venue for about 30 minutes before heading over to Cagney’s Steakhouse around 8:45 pm.

Half of our group had an 8:30pm reservation and the rest of us had a 9pm reservation, though we had to wait until close to 9:30 pm to get seated. So, time to get another drink at the A-List Bar. This time, I went with my favorite cocktail, a Sidecar.

Dinner lasted until past 11:00pm and included a mix of great food, like the crab cake and bone-in veal chop, and engaging conversation. Given our late start, we were the last table to leave the venue. 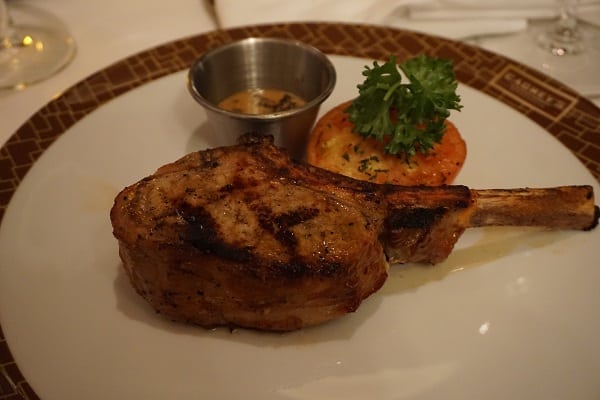 Saying goodbye to several new friends, we stopped in at the wine bar which was closing. Luckily, I was able to convince the head sommelier to let me take pictures of the menu. Next up, we snuck into the back of the Cavern Club to see a few songs from the Beattles cover band. The place was packed, so we moved on to our final stop of the night, Q Texas Smokehouse to listen to the Camille Rae band. Even though we are not Country music fans, we enjoyed the performance and hope to see them onboard when we return in August. It was about 12:30 am when we decided to call it a night. Back to the room, we did some quick packing and headed to bed for 1 am with our wake up time set for 6:00 am. Always the worst part of the trip- disembarkation morning! 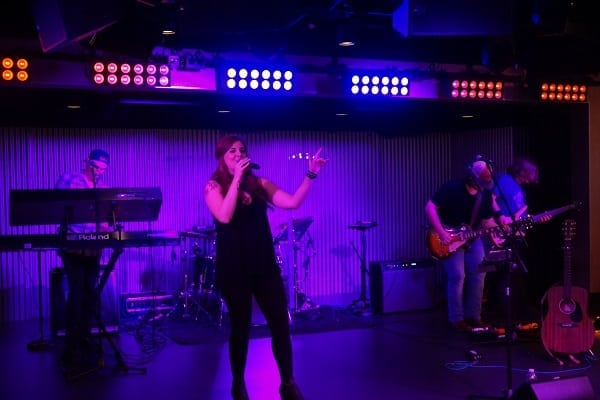 This sampler cruise has us even more excited about our upcoming trip on the ship in late August. The design of Norwegian Bliss is modern and classy. The new experiences at sea, like the race track and laser tag, were a lot of fun though in our opinion at least one experience per person should be included in the cruise fare. Staff informed us that due to processing times and unpredictable weather conditions, it would not be possible to do this as there would not be enough time even on a 7-day cruise to accommodate all passengers. 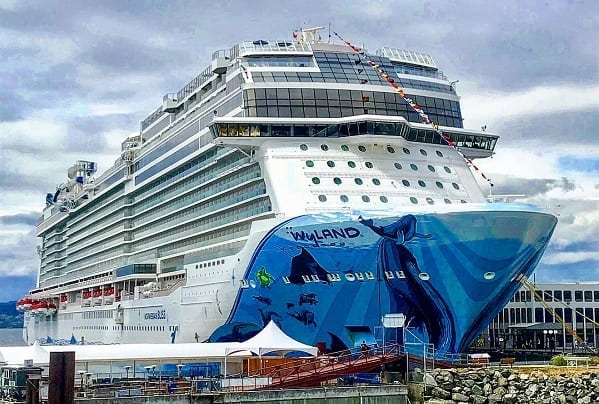 Food at the specialty dining restaurants was excellent, and we particularly liked the new venues Q and Los Lobos. We did not dine in the main dining room, so can not comment on that food. Norwegian Bliss is certainly a family friendly trip, but it also appeals to couples and luxury travelers as well with the impressive Thermal Suite and the Haven “ship within a ship” concept. If you are thinking of cruising to Alaska this summer or next, or want a Caribbean cruise on one of the most innovative ships sailing from Miami this winter, we would recommend you book a voyage on this ship!

Does our live blog have you excited to sail on Norwegian Bliss? Drop us an anchor below to let us know whether you will be cruising on this ship during its first season in Alaska. 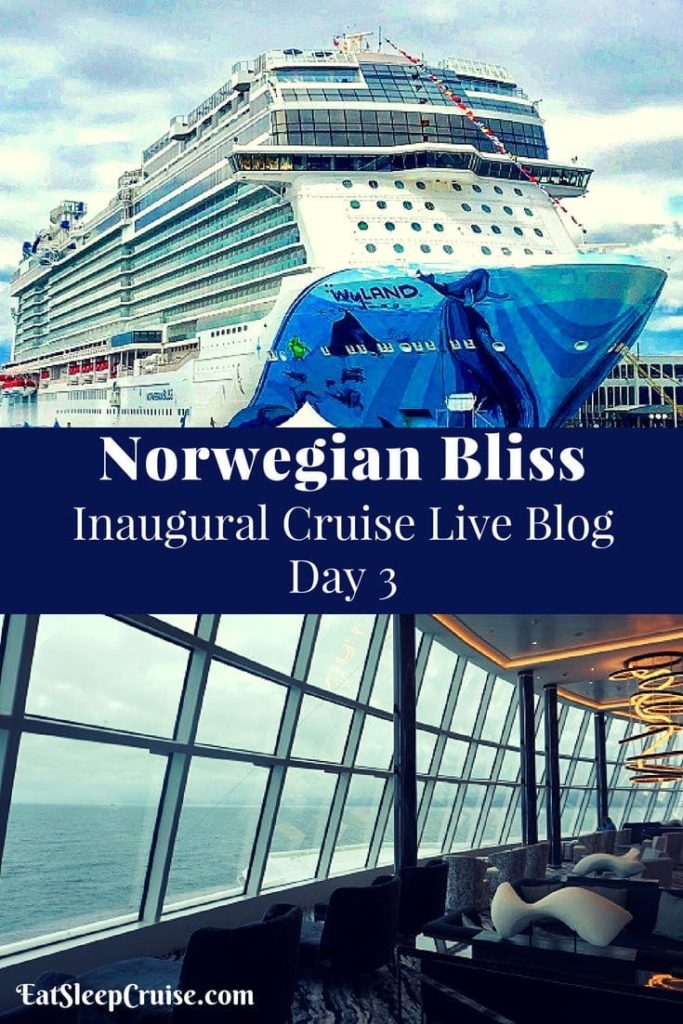