Norwegian Epic is in a class all of her own. The ship set sail in 2010 and remains the second largest vessel in the NCL fleet. We jumped at the opportunity to test out Norwegian 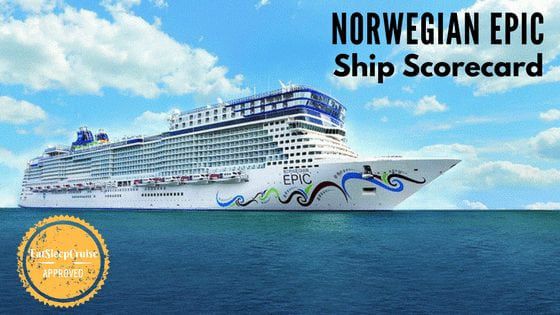 Norwegian Epic is in a class all of her own. The ship set sail in 2010 and remains the second largest vessel in the NCL fleet. We jumped at the opportunity to test out Norwegian Epic on a rare four-night Bahamas cruise. We took advantage of a great promotion to get a balcony room with multiple perks for a bargain price. Want to know how the ship fared in our 12 point inspection? Have a look at our brand new Norwegian Epic Ship Scorecard.

Sailing during Spring Break was probably not the smartest move on our part. With close to 1500 college students onboard, the ship’s small pools were overrun with travelers. The additional pool in the Spice H20 area did little to ease the congestion of the busy pool deck. The crowds made traversing deck 15 a bit of an obstacle course during peak times and finding a lounge chair in the sun during the day was nearly impossible. If you are looking for a quieter area to relax in the sun sans pool, head up to the sun decks. Deck 18 is a bit of a hidden gem! 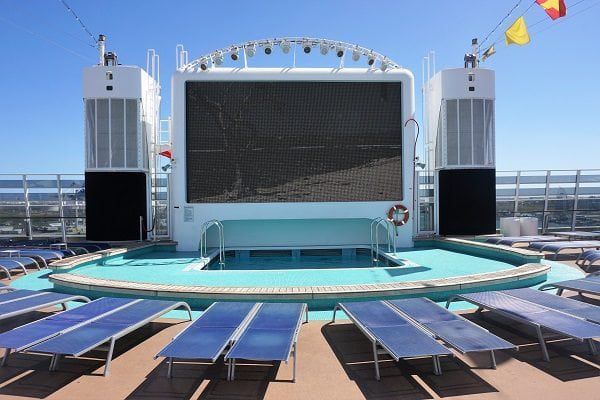 Norwegian Epic offers a diverse array of activities for sports enthusiasts and active cruisers. At the aft of the ship, there is a dedicated sports court with basketball and soccer equipment. There is also a bungee jumper and climbing gym for younger children. Norwegian Epic boasts three waterslides, including the first bowl slide at sea, which were all worth the short wait. The ship also has a rock climbing wall and a rappelling wall, which was a nice addition to the traditional onboard offerings.

Many of the ship’s venues were consistently busy with fellow cruisers, especially the bars. Even compared to the all-inclusive Norwegian Sky, we were surprised at the never-ending line of cruisers at the bars, restaurants, and casino. Staff did their best to keep up with the requests for drinks and food, but some venues did feel understaffed, like the popular Shakers Martini Bar which on some nights only had one bartender. Service in the restaurants was on par with typical cruises, with an average dinner at a table for two lasting 75-90 minutes. 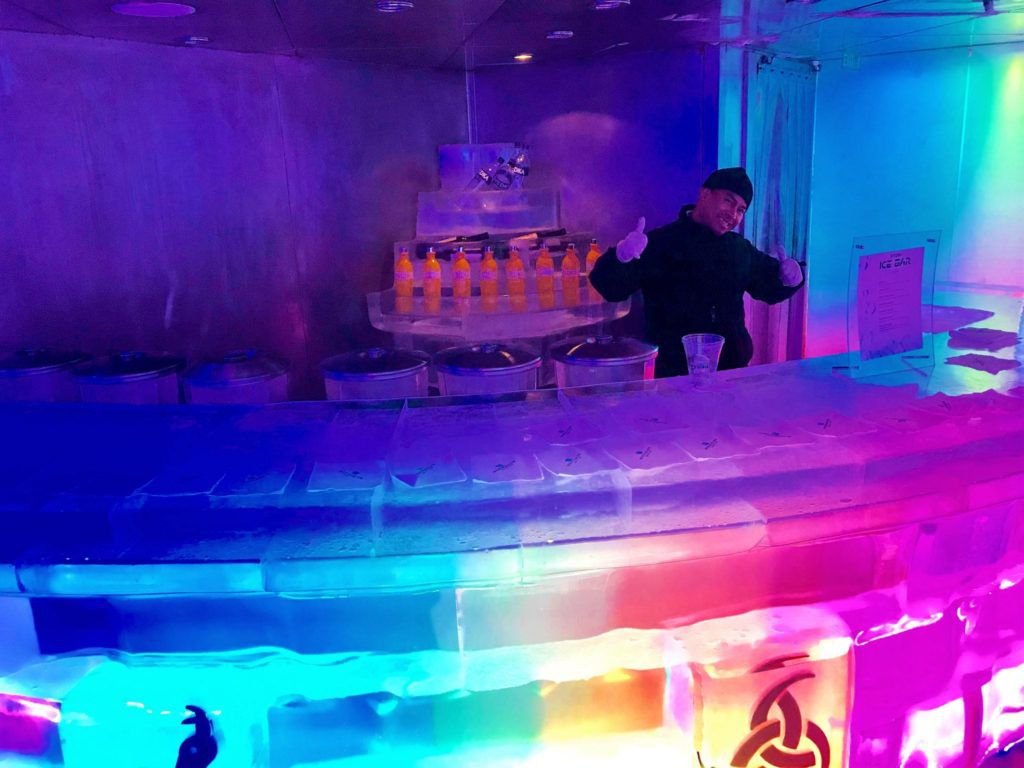 Like most mega ships, Norwegian Epic featured a wide array of activities during the day. With an additional unplanned sea day due to sea swells, the cruise director and his staff were able to add extra options to keep people engaged. Game shows, trivia, demonstrations, and live music were offered, along with the typically scheduled onboard activities like family movies, shopping/port talks, and tournaments in the casino. With mostly sunny weather, there was also plenty of fun to be had on the outdoor decks meaning there was never a dull moment during the day.

Not Applicable – We did not eat any meals in the ship’s two main dining rooms (The Manhattan Room and Taste).

We have sailed on NCL quite a bit over the past two years, so we have reasonable expectations from the specialty restaurants onboard the ship. With a three-day specialty dining package and only four nights, we ended up dining at only two restaurants, Cagney’s Steakhouse and La Cucina. The food and service were on par with our experiences in these venues on previous ships, with some fabulous offerings, like the perfectly cooked ribeye steak, and some under-performing dishes like the lasagna. We would definitely recommend cruisers try the specialty restaurants, especially if you have a “free” package. 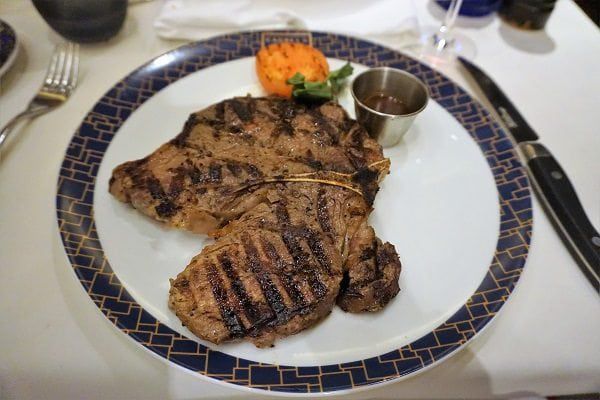 We did take advantage of several of the casual dining spots on the ship. On embarkation day, we ate lunch at O’Sheehan’s, which is always our alternative to the Garden Cafe. We did make a few stops at the Garden Cafe for snacks and one breakfast. The food items here were hit or miss. For dinner, we tested out the complimentary Shanghai restaurant. This Chinese inspired restaurant was a highlight of the complimentary dining options. If you are a fan of Chinese food, we suggest you make reservations here once onboard the ship. 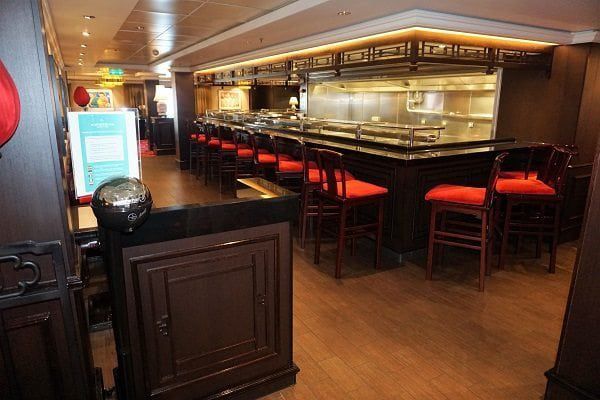 There is plenty to do on the ship. With only four nights, we did feel a bit rushed attempting to accomplish everything. The nightly parties like the Glow Party and the Awesome 80’s party never disappoint. The trio of performers at the dueling piano bar were great, as was the rock band Siglo that performed in the Cavern Club on select evenings. There was plenty of other live music and a Beatles cover band to keep you entertained all night long. 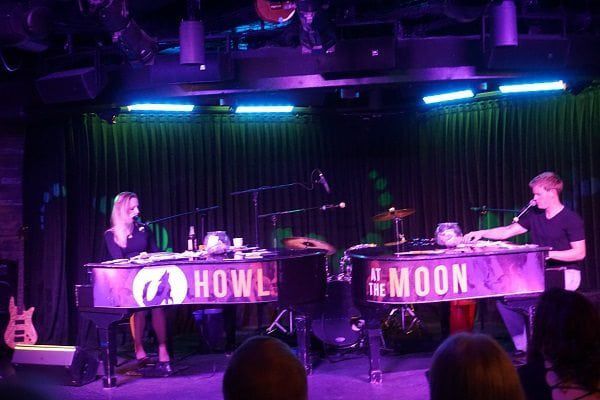 Entertainment on Norwegian Epic was superb. The two main theater shows were by far the highlight of the cruise. While a bit more of a mature show, Priscilla Queen of the Desert was funny and upbeat. Burn the Floor – The Rebellion in the Ballroom was equally impressive. The show featured grand dance numbers and choreography coupled with powerful rock music. We went to both comedy shows and found one comedian to be much funnier and better at reading the crowd than the other. Even if you are not usually a fan of cruise entertainment, you should definitely book reservations for these shows. They are well worth watching! 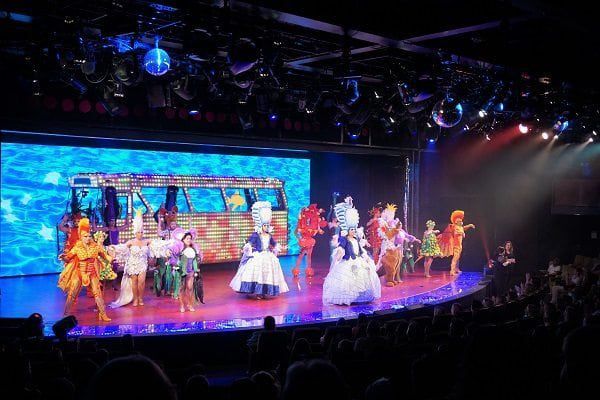 Priscilla Queen of the Desert

Going into the cruise, we were aware of the mixed reviews regarding the cabin design. Yes, the design and layout are different than anything we have experienced on a ship. The rooms did offer plenty of storage space and an adequately sized balcony. However, the cabin seemed narrow and the bed shorter than usual, making navigating the room difficult. We liked having a separate sink in the main cabin area, but we both agreed that the separate toilet and shower were not an ideal setup.

We are fans of trying out different cocktails and specialty beverages at themed bars. One of our favorite spots on Norwegian Epic was the Shakers Martini Bar, showcasing live piano music and a specialty cocktail menu. The only problem was that the bar was always crowded, and the staff were always inundated with orders. Similarly, the Maltings Beer and Whiskey Bar had a signature list of drinks but was also very busy. Of course, there are also several other bars serving the line’s standard menu to ensure you have a cocktail whenever you are thirsty. 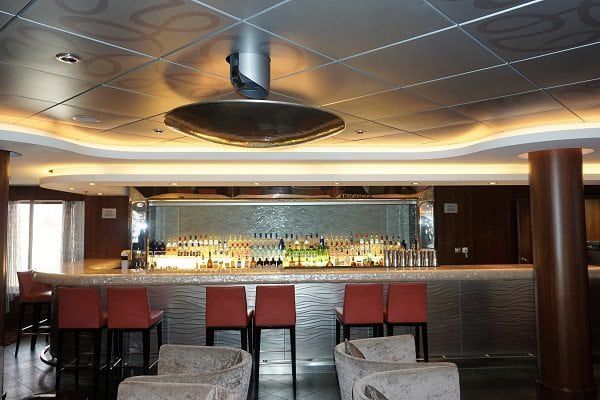 Crowds, crowds, and more crowds seemed to be the trend on our cruise. We have cruised on the world’s largest cruise ships and are not usually worried about crowd control as these mega ships are designed to disperse travelers during peak times. One of the design flaws of this ship is the odd configuration on Decks 5-7, funneling individuals through the center of the ship with no central staircase and an awkwardly positioned escalator. On a positive note, the shows were usually not busy until the standby line was let into the venue. If you make reservations for entertainment, you will be able to score some good seats.

There isn’t much more that we can say about Cirque Dreams other than we both loved the show. The artists in this circus-style show ranged from balance acts and jugglers to acrobats and strength performers. The show was fast-paced and funny, and the small theater setting puts you right in the middle of the action. There is even some audience participation. Having already eaten before the show, we only sampled the food from the 3-course prix-fixe meal. Like similar dinner theater shows on cruise ships, the food was just okay. For us, seeing the show was worth the up-charge price. 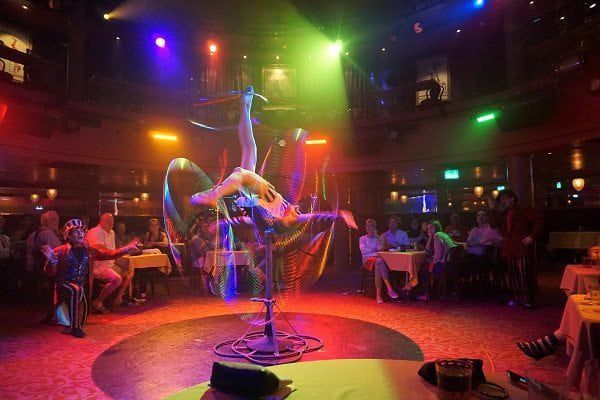 Our four-day cruise on the Norwegian Epic was packed, both figuratively and literally. With a variety of entertainment and dining options, there was always something to do, see, or eat. The food was what we have come to expect from NCL, with some memorable dishes from both the complimentary and specialty dining restaurants. The Princess was a fan of the martinis at Shakers, and we both enjoyed our evenings bouncing from theater shows, to other entertainment offerings, to Spice H2O parties. This is certainly an epic cruise for those looking to make the most of their vacation days. 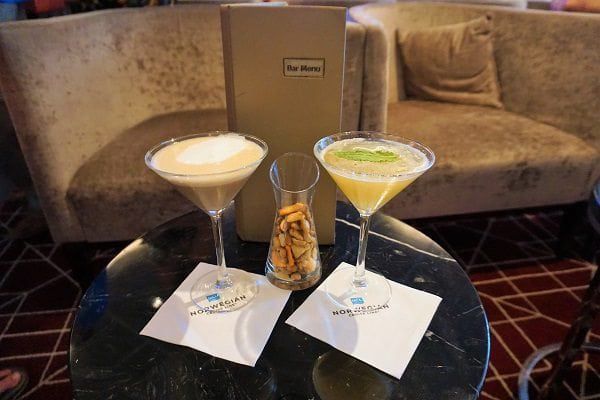 An Epic Cruise on Norwegian Epic

The team at NCL was kind enough to get us passes to the Posh Beach Club. This Club is reserved for Haven guests, but there are a limited number of passes available for purchase. (We were quoted different prices by different cruise staff ranging from $50-70.) This is an excellent investment for those who want to enjoy some time in the sun with fewer crowds and prompt bar service. Even if you do not opt for the Posh Club pass, you can still find some quiet spaces on the ship. One suggestion is the hidden sun deck on Deck 18 forward (opposite of Posh).

While we did not stay in the Haven, the hotel director invited us to try out the restaurant reserved for guests in this “ship within a ship” area. We ate at the Epic Lounge once for each meal, and we both agreed it was some of the best food and service onboard the ship. The other benefits of the Haven, including elegant rooms, a private pool and courtyard, and a dedicated bar and lounge, make it a reasonable investment for those who can afford it. 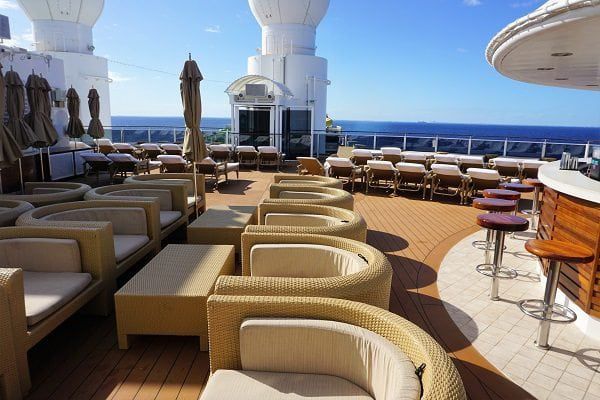 Have you sailed on Norwegian Epic? What are your thoughts on this one of a kind ship? Drop us an anchor below with your own Norwegian Epic Ship Scorecard. 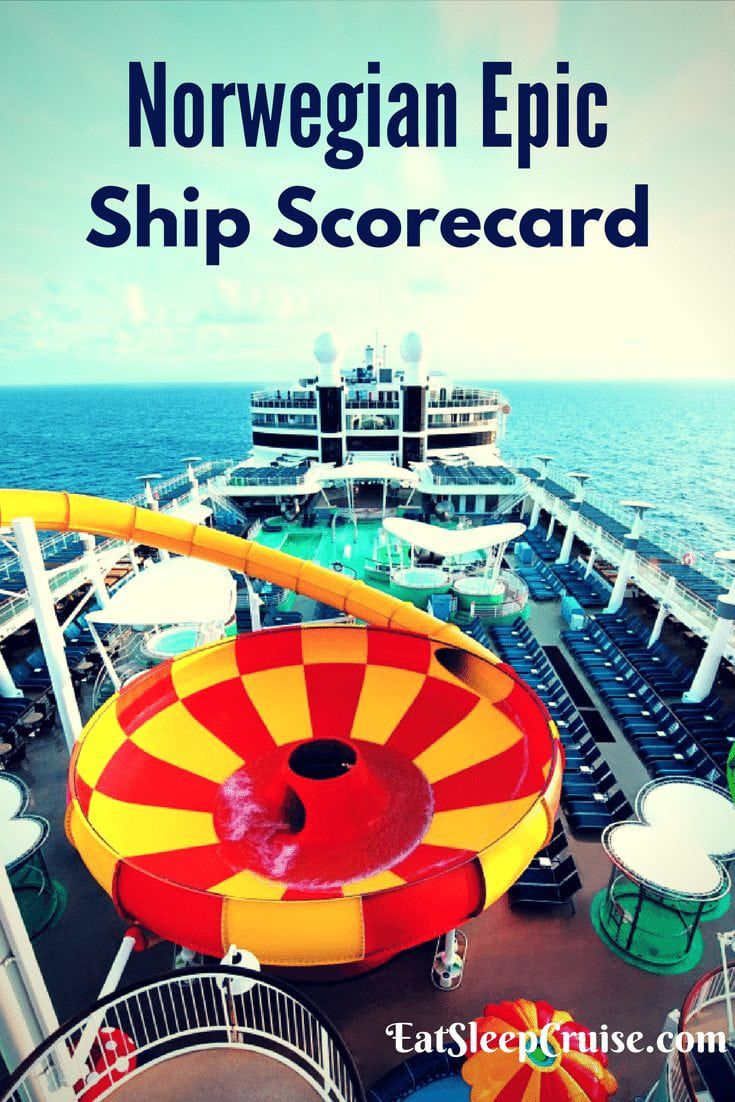 Don Bucolo, or “DB”, loves everything about cruising- the ocean, the food, and the atmosphere. While he may be obsessed with doing extensive amounts of research on ships and all elements of a cruise, Don enjoys sharing his new found knowledge with fellow cruisers. When he is not sailing the high seas, he does whatever his wife tells him to do-it only took 10 years to realize this.
Don
Previous Post « Cruise News March 11, 2018
Next Post Top Things to Do on Norwegian Epic »