We detail all of the new dining, entertainment, and upgrades coming to the newly amplified Oasis of the Seas when it emerges from drydock in the Fall 2019. 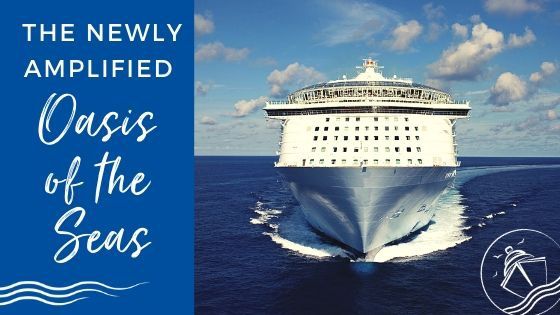 When Oasis of the Seas debuted in 2009, the ship revolutionized cruising. As the largest cruise ship in the world, Oasis of the Seas ushered in a variety of new attractions, experiences, and firsts at sea. Now, Royal Caribbean is looking to re-imagine this namesake vessel to make it unlike any ship in the fleet once again. A lot of changes are planned for the ship this year, and we have details on all the updates coming to the newly amplified Oasis of the Seas.

Everything Coming to the Newly Amplified Oasis of the Seas

While it was known that Oasis of the Seas had an upcoming drydock, Royal Caribbean’s announcement this week that the ship would undergo a $165 million dollar transformation left many cruisers (happily) stunned. Once this revitalization is complete, the newly amplified Oasis of the Seas will truly be a brand new ship.

Related Post: Our Oasis of the Seas Cruise Review

Perhaps some of the biggest changes coming to Oasis of the Seas will be the outdoor areas. As many suspected, the ship will be receiving the 10 story Ultimate Abyss. This slide is now a staple on the other Oasis-class ships. 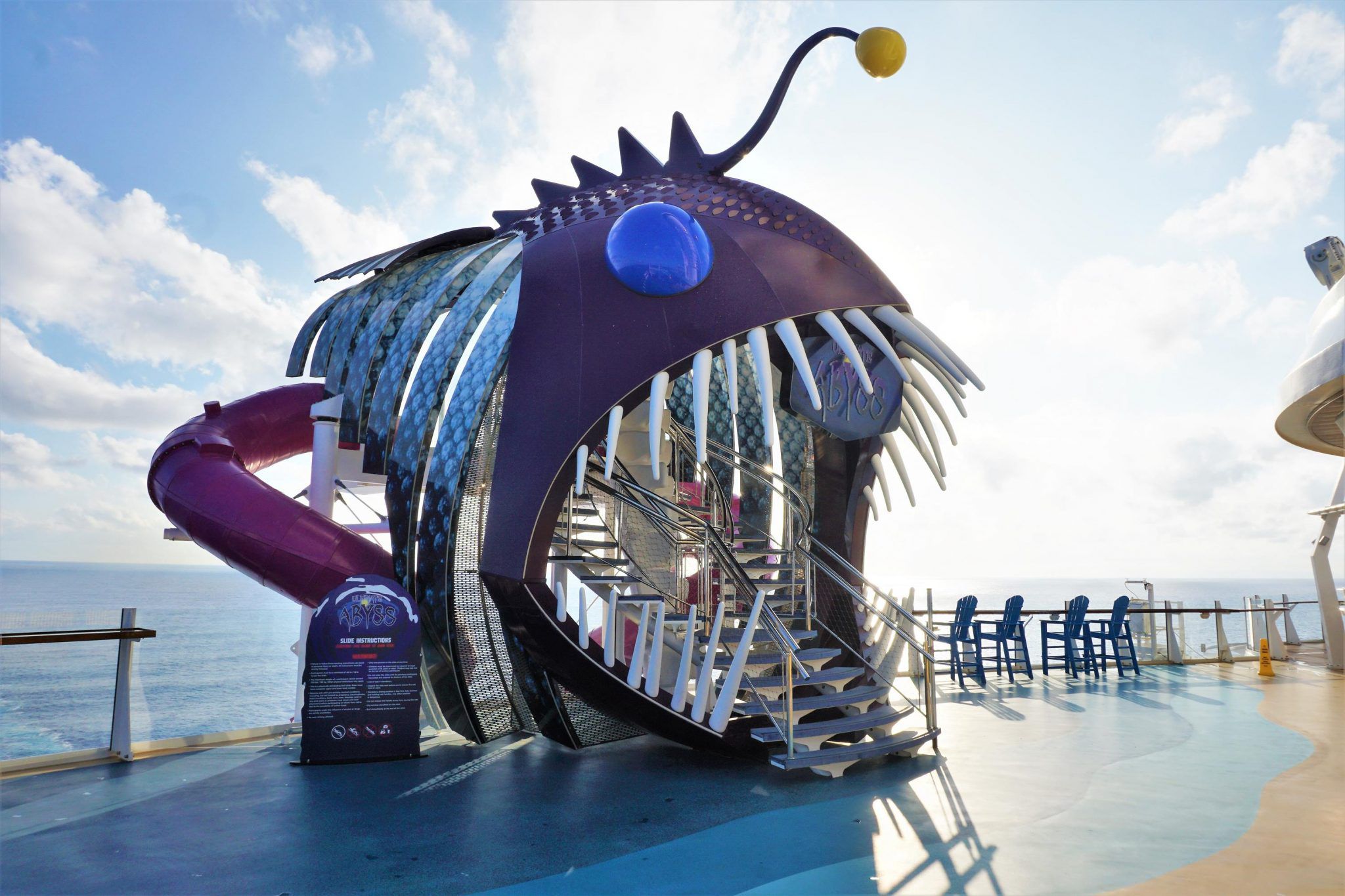 For those who are not courageous enough to brave the over 150 foot drop on the Ultimate Abyss, Oasis of the Seas will also be getting the trio of waterslides known as the Perfect Storm. Also found on other ships in this class, cruisers can get wet and wild as they plunge down these multi-deck waterslides, known as Typhoon, Cyclone, and Supercell.

Similar to the recently updated Navigator of the Seas, Oasis of the Seas will have a brand new Caribbean-inspired pool deck. To spruce up the current pool deck, the ship will receive some new lounge areas, including comfy casitas, daybeds, hammocks, and swing seats.

While the spiced up pool area is sure to be popular, the main attraction will be The Lime & Coconut. This two-story, signature bar will be one of the liveliest spots on board the ship. Home to signature cocktails, DJs, and live music, it will be the place to hang out both day and night. 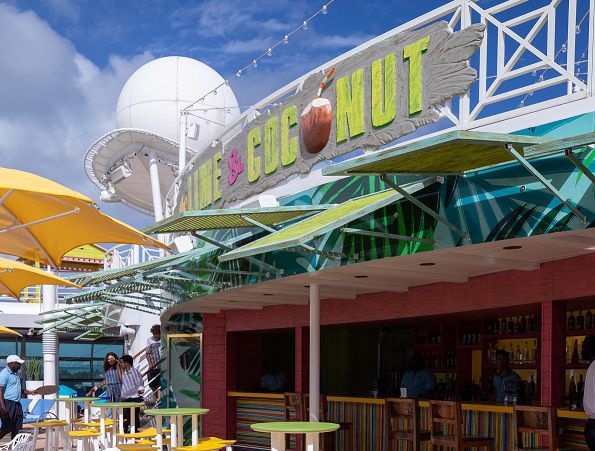 The remaining pool deck will receive some additional updates, with new whirlpools coming to Deck 15. Splashaway Bay on Deck 14 will also be getting an upgrade, with a Splash Pad for tots, three waterslides, water cannons, fountains, pools, and the first-ever twin drench buckets.The adults only Solarium on Decks 14 and 15 will receive a facelift too.

New Dining Coming to the Amplified Oasis of the Seas

A few fan favorites for dining that were introduced on Symphony of the Seas will be coming to Oasis of the Seas. The El Loco Fresh Mexican restaurant will be added during the revitalization. Most likely, this restaurant will replace the Wipeout Cafe on Deck 15. The venue will offer complimentary breakfast and lunch with al fresco dining. We were both fans of this restaurant which offered some fresh favorites like burritos, quesadillas, and a custom salsa bar. 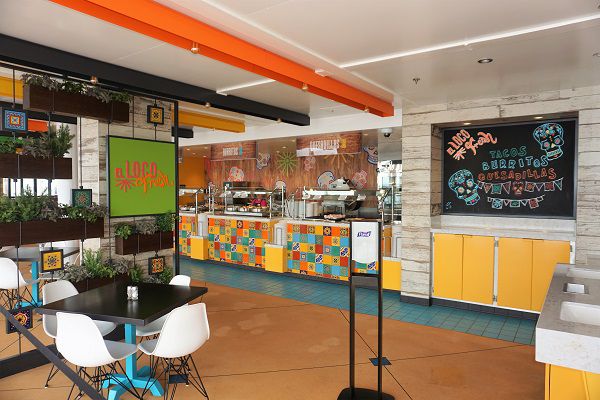 Another dining option coming to Oasis of the Seas is Playmakers Sports Bar and Arcade. Seemingly, this restaurant will replace Sabor on Deck 6 in the Boardwalk.

Offering a mouth-watering selection of pub favorites, including wings, burgers, and the cookie dessert, this rendition of Playmakers will include a VIP owner’s room which will most likely be available for private events. With over 80 televisions and a wide bar selection, this will be one of the hottest places on the Boardwalk. 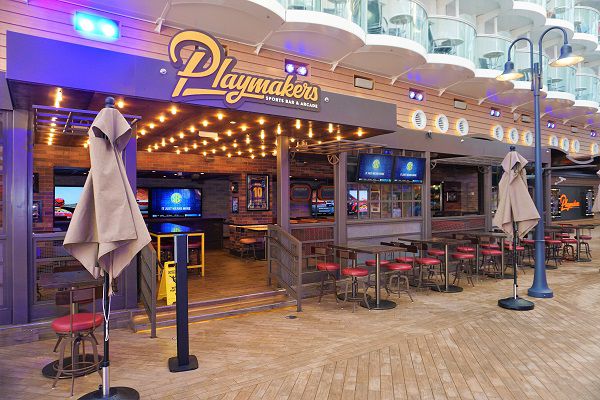 Another sweet addition to the Boardwalk will be Sugar Beach. This up-charge venue is home to more than 220 types of candy and a new walk-up ice cream window. It is the perfect stop for families looking to satisfy those sweet tooth cravings while at sea.

Perhaps the most anticipated addition to the dining lineup though is a brand-new restaurant, the Portside BBQ. While the location of this restaurant has not yet been confirmed, it is expected to be on one of the upper levels offering views of the surrounding ocean. 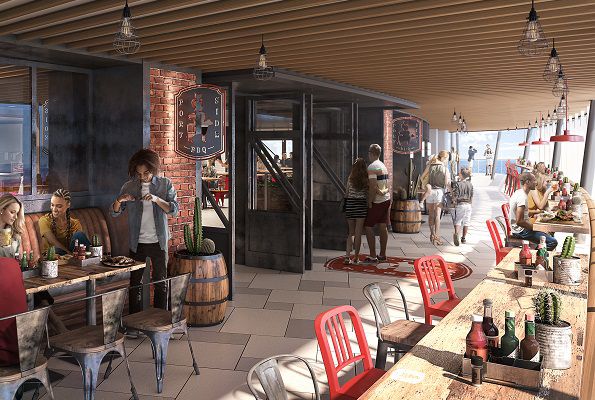 Entertainment Gets Amplified on Oasis of the Seas

Several other new venues coming to Oasis of the Seas will ensure that your evenings are just as packed as your days at sea. The Bionic Bar will replace the Champagne Bar on the Royal Promenade. Here, two robotic bartenders mix up classic and specialty drinks right before your eyes. 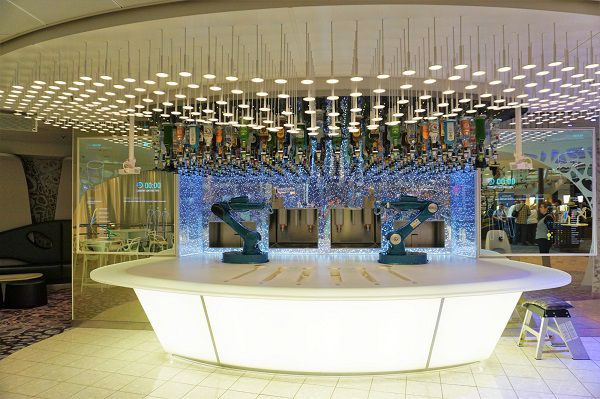 Also coming to the Royal Promenade is Spotlight Karaoke. The previous On-Air venue will be re-imagined with a main stage and two private rooms to let your inner rock star shine.

Perhaps one of the biggest transformations on Oasis of the Seas is the addition of the Music Hall. One of our favorite venues on the Quantum-class ships, this venue rocks…literally. 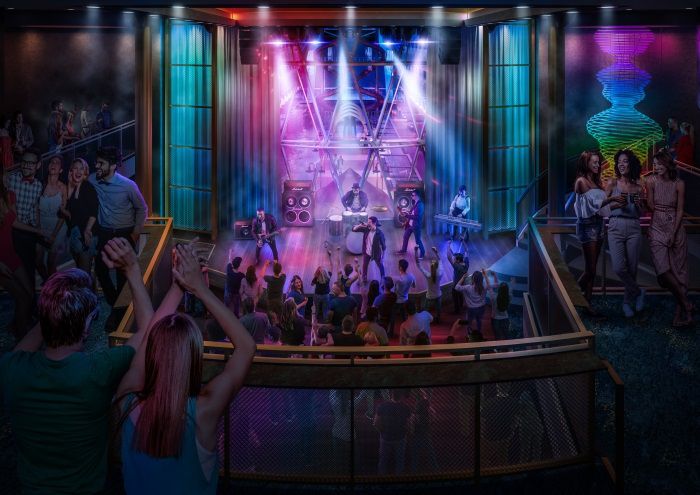 With cover bands and live rock shows, the Music Hall is a two-story concert venue. A good bet is that Dazzles, currently on Deck 8 and 9, will be transformed to this new venue that will keep the party going all night long.

Several of the line’s cruise ships have received laser tag games recently, Yet, a brand new game will debut on the amplified Oasis of the Seas. The complimentary Clash for Crystal City will take place in the Studio B ice rink on Deck 4. Join one of the last remaining clans on a frozen Earth as you battle for resources in this glow-in-the-dark laser tag game. 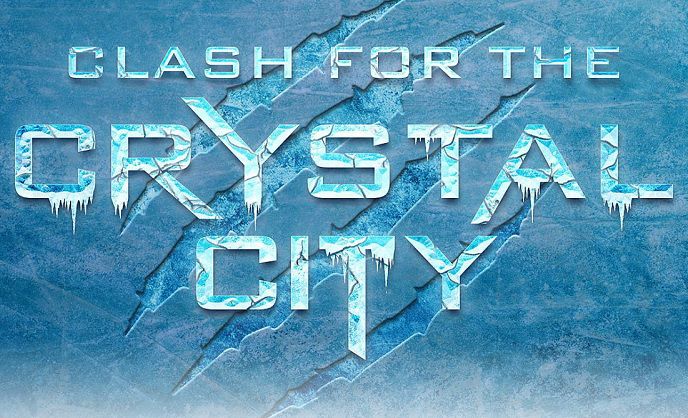 The children’s areas will also be totally transformed. Adventure Ocean on Deck 14 will be redesigned to include areas organized by activity type. Parents and their children can use this digitally enhanced area to be fully immersed in their own activities and adventures.

The teen spaces on Deck 15 have also been re-imagined to provide a space that is off limits to adults. A special “hidden” entrance will allow teens aged 13 to 17 to have a space all to themselves. Here, they can watch movies, listen to music, or play video games.  A newly enhanced outdoor area will make this space more laid back and relaxing.

Fans of Puzzle Break found on other Royal Caribbean ships will want to prepare themselves for the out-of-this-world new game coming to Oasis of the Seas, Mission Control: Apollo 18. In this up-charge escape room experience, teams must work together to solve all the puzzles in the command center to ensure Apollo 18 launches in time. 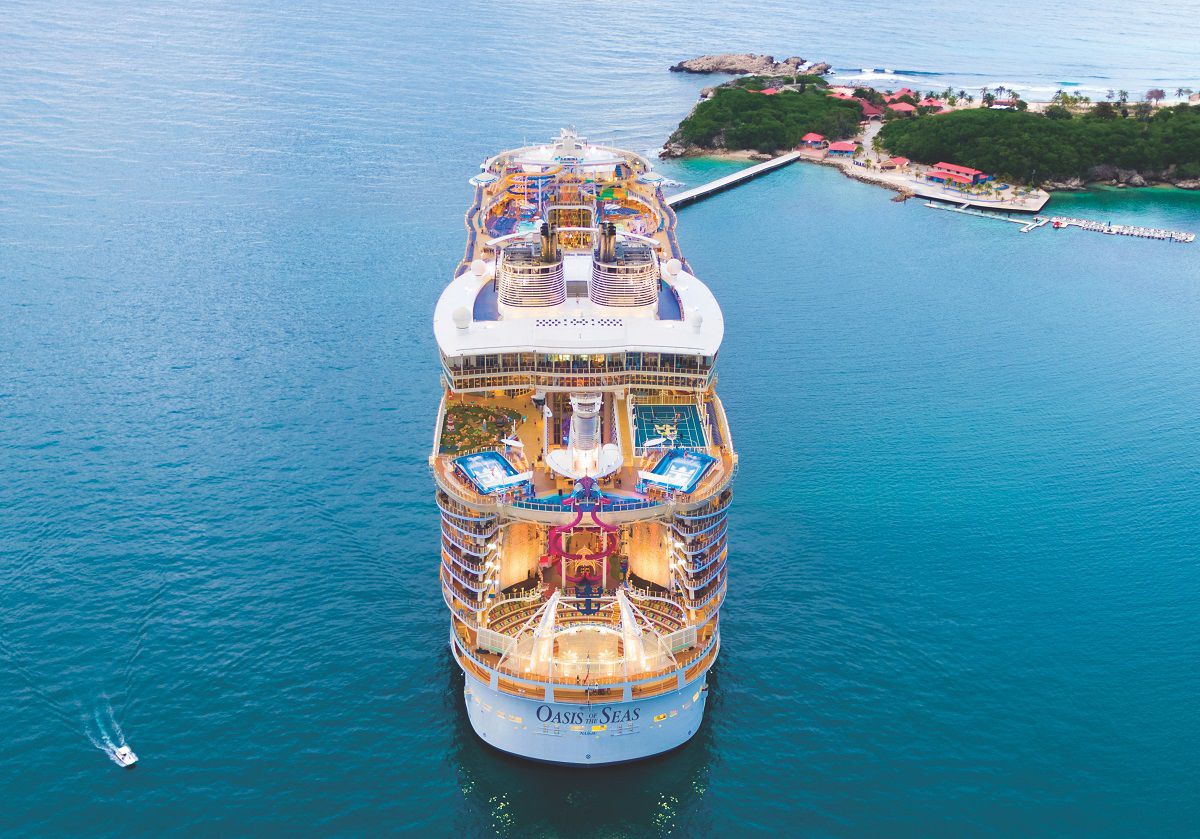 Are You Ready for the Newly Amplified Oasis of the Seas?

Oasis of the Seas was unlike any cruise ship when it debuted a decade ago. Following its upcoming revitalization, it will certainly be like no other ship sailing the Caribbean. Including new dining, entertainment, and outdoor experiences from a variety of the line’s other classes of ships, Oasis of the Seas will once again be a one-of-a-kind cruise ship.

The only question remaining is when do you plan to sail on this newly amplified vessel?

Are you excited for the changes coming to Oasis of the Seas? Will you be booking a cruise on this ship following the upcoming amplification? Drop us an anchor below to let us know which new addition to the ship you will try out first! 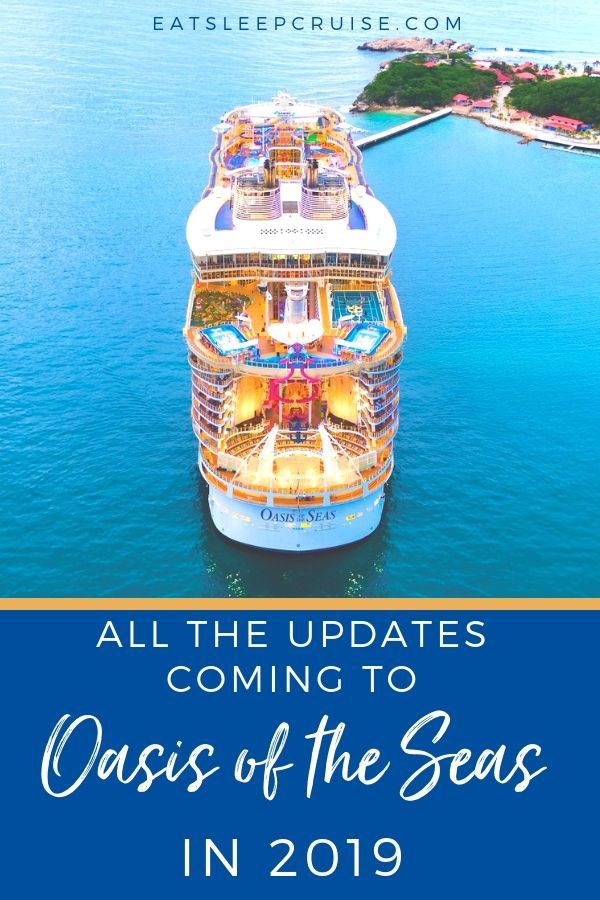 Don Bucolo, or “DB”, loves everything about cruising- the ocean, the food, and the atmosphere. While he may be obsessed with doing extensive amounts of research on ships and all elements of a cruise, Don enjoys sharing his new found knowledge with fellow cruisers. When he is not sailing the high seas, he does whatever his wife tells him to do-it only took 10 years to realize this.
Don Bucolo
Previous Post « Top Things to Do on Celebrity Solstice
Next Post Best Summer Cruises for 2019 »