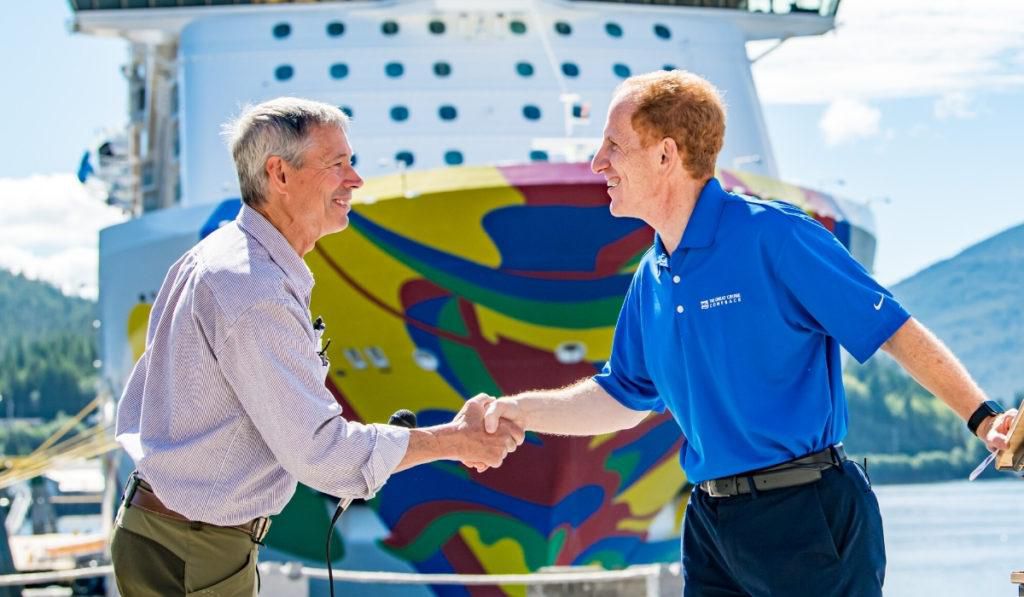 Norwegian Encore is the First Ship in the Fleet to Return to Cruising from the U.S. During Her Alaska Debut

MIAMI (Aug. 16, 2021) – Norwegian Cruise Line (NCL), the innovator in global cruise travel with a 54-year history of breaking boundaries, completed its milestone-making voyage in the U.S. with Norwegian Encore’s return to Seattle on Aug. 14, 2021 after a celebratory week of calls to the Alaska ports of Icy Strait Point, Juneau and Ketchikan for the very first time.

After suspending sailings 17 months ago, Norwegian Encore made her debut on the West Coast and showcased NCL’s commitment to Alaska by unveiling new guest experiences at Icy Strait Point and Ketchikan, Alaska. During the sailing attended by more than 2,500 guests as well as members of the SailSAFE™ Global Health and Wellness Council members, NCL also received a commendation from the Alaska Department of Environmental Conservation for its joint sustainability efforts with the new Ward Cove development in Ketchikan.

“It has been incredibly rewarding to sail again and to see our robust health and safety measures in action,” said Harry Sommer, Norwegian Cruise Line president and chief executive officer. “The past week was filled with firsts: Not only was it Norwegian Encore’s Alaskan debut and our first sailing out of the U.S. in 17 months, but we also officially opened two new docks, developed with our local partners in Icy Strait Point and Ward Cove in Ketchikan.”

On Tuesday, Aug. 10, 2021, a double ribbon cutting ceremony took place at Icy Strait Point to officially open the new Wilderness Landing pier and the first of two gondola systems to be completed as part of a joint investment between Norwegian Cruise Line Holdings Ltd. (NCLH) and the Huna Totem Corporation. The new Wilderness Landing provides additional forest and beach areas for visitors to explore the natural wonders of the destination. With the opening of the new high-speed Transporter Gondola, guests have easy access to Icy Strait Point’s first pier, Adventure Landing, where the Historic Salmon Cannery dating back to 1912 and other local attractions are located. Once completed later this summer, the Mountain Top Gondola will take guests to the top of Hoonah Mountain at 1,600-feet of elevation, where miles of new hiking trails and scenic vistas await.

Norwegian Cruise Line restarted its cruise operations on July 25, 2021, following a more than 500-day suspension, with Norwegian Jade launching seven-day itineraries to the Greek Isles. On Sunday, Aug. 15, 2021, Norwegian Gem became the first ship in the fleet to resume operations from Miami and set sail from the new Norwegian Cruise Line Terminal at PortMiami. Through October, the ship will offer a selection of week-long voyages to the Caribbean and four-day cruises to the Bahamas.

The fleetwide redeployment will continue in partnership with local governments and are guided by the robust protocols of the Company’s SailSAFETM health and safety program, which at its cornerstone includes that all crew and guests must be fully vaccinated to embark for voyages through Oct. 31, 2021. Working with the leading experts of the SailSAFE Global Health and Wellness Council, the robust protocols will be regularly evaluated and modified as needed, making science-based decisions to protect guests, crew, and the destinations it visits. As protocols evolve and additional information becomes available, updates will be published at www.ncl.com/sail-safe.

For more information about the Company’s award-winning 17-ship fleet and worldwide itineraries, or to book a cruise, please contact a travel professional, call 888-NCL-CRUISE (625-2784) or visit www.ncl.com.

Heidi is a physical therapist by profession, cruise enthusiast at heart, and Princess all the time! She is a self-confessed thrill seeker, obsessive planner, and over-packer. She is always looking for the latest and greatest adventures onboard and ashore, enjoys researching top things to do in ports of call, and loves dressing up for formal nights.
Heidi Bucolo
Previous Post « Royal Caribbean Makes Return to Mediterranean
Next Post Carnival Cruise Line Celebrates National Rollercoaster Day »