The Everglades Airboat Ride is a popular shore excursion option in Ft. Lauderdale. You get to experience wildlife up close and personal-especially the alligators. This excursion is a good way to kill time before a 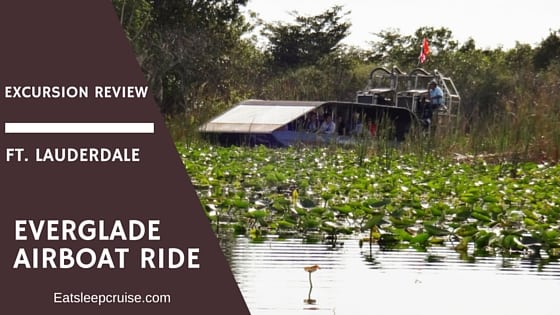 Highlight: See some alligators and wildlife in natural habitat of the everglades. Exploring the ecosystem for a bit can be a nice way to end a trip to Florida and the Caribbean during this Everglades Airboat Ride Excursion.

What’s Missing: The actual airboat tour is only 30 minutes, and the “speed bursts” from the airboats were not as thrilling as expected.

Main Takeaway: You should checkout the everglades when you are in Ft. Lauderdale. This tour operator, Everglades Holiday Park, was well organized and you get to experience wildlife up close and personal- especially the alligators. The Everglades Airboat Ride Excursion is a good way to kill time before a late day flight following a cruise.

For our trip on the Independence of the Seas in January 2014, we were saddled with a late afternoon departure. Instead of getting to the airport and just sitting around for hours, which we ended up doing to some extent anyway, we thought a post-cruise excursion might be a nice addition. There are several things to do in Ft. Lauderdale, but Royal Caribbean just happened to offer the Everglades Airboat Ride Excursion which caught our attention. We decided to book while onboard our cruise.

Getting to the Everglades

After 8 days of cruise fun, we, along with many of our fellow passengers, wandered among the confusion to find our tour bus outside the cruise port. Eventually locating the bus and boarding, we got to admire the Independence of the Seas in front of us one last time.

With everyone on the bus and a quick head count, the bus was off for the 40 minute ride to the Everglades. During the ride to the park, the driver gave some intermittent facts about Fort Lauderdale and the sites we were passing.

Upon arrival at the park, we were dropped off near the airboats, and the bus driver informed us of our meeting location at the rear of the building following the excursion. The park was rather busy with many post-cruisers as well as other individuals who were here for their own weekend fun.

Seeing the crowds of people surrounding the airboats, we immediately made our way down to the dock. Of course, before boarding the airboat they take your picture (which is sold to you after the tour) – so we did our best to provide a good pose!

A River of Grass

Once on the airboat, the captain introduced himself, though his name escapes me. He was a lively and comical guide. His descriptions of the wildlife were informative, but he had a very distinct approach that was hysterical. I think I enjoyed his narration as much as seeing the wildlife!

During most of the Everglades Airboat Ride Excursion, he narrated through a loudspeaker which was sometimes difficult to hear over the roar of the engine. Other times, he let the boat idle to come down from the bridge to point out the scenery or provide more in-depth encounters with the flora and fauna of the everglades.

During the tour, you navigate three “highways” which include the “speed bursts”. Given that we are thrill seekers, we were expecting these “speed bursts” to be a bit more of an intense experience. It was still fun to be in the airboat, but definitely not a true high speed thrill. The airboats are very loud though, so if you are sensitive to sound, you might want some earplugs.

The Wildlife in the Everglades

On our first stop, we came to a few trees covered with black vultures. The boat did not get too close to the flock, but we were able to see them perched and flying around the trees. A few decent photos later, the boat was ready to move on to the next stop.

Maneuvering through the everglades, the tour guide made it to our next location. This time, he came down from the bridge to give us details about the different types of grass found in the everglades. He cut a piece of sawgrass and explained how it had small teeth, like a saw, that were very sharp if you moved your hands up the grass in a particular way. He then passed around the sample for us to experience firsthand.

Next, the boat floated down the everglades to a spot where a few birds, later identified as Purple Gallinule, were sitting in the grass. It is obvious that the tour guides regularly stop at this location as the birds remained still until the boat stopped then jumped onto the airboat near the captain. He began to feed them Smartfood popcorn, even putting a piece of popcorn in his mouth at one point for the bird to grab it out almost on command. Popcorn was handed out to the fellow passengers who wanted a firsthand encounter with the birds as well. After 8 days on a cruise ship, I was actually hungry for some of the popcorn myself! Don’t worry— I left it all for the birds.

On to the Alligators

After learning a bit about the plant and animal life, we were on to the second “highway” and another “speed burst” leading us to the area that everyone was waiting for— it was time for the alligators! In all, we probably saw about four alligators, and they all got pretty close to the airboat allowing for some good photo opportunities. Although, there were times that another airboat coasting in would cause them to retreat a bit. It was definitely a great experience to see the alligators that up close and personal in their natural habitat. At times, I almost thought they were going to jump right in the boat. None of them did, on our trip anyway!

After the rendezvous with the alligators, it was time for the third and final speed burst, bringing us back to the main loading dock. We would disembark (two disembarkations in one day is very disappointing!) and head over to the alligator show.

Before doing so, I was sure to give our captain a well-deserved gratuity for his humorous yet informative tour. The Princess, on the other hand, convinced me to buy our photo which was taken before boarding the airboat.

After the 30 minute or so tour on the airboat, we were back on land and made our way to the Gator Boys show. I have heard of these guys but have never really seen the television show. One of the alligator handlers talked a bit about their rescue work and performed various feats with some of the rescued alligators for a total of 10 minutes or so. One trick included putting his chin on the top of a wide-open alligator mouth, which apparently has something like 3500 psi of pressure when its jaw closes shut! He also put his head essentially into the alligator’s mouth and did some additional “gator wrestling moves” including having the alligator stand up.

While I would never put my head in an alligator’s mouth, watching someone else do so was fun. After the show, you could talk with some of the Gator Boys or hold a baby alligator.

We decided we had had enough alligator experiences for the day so headed back towards the gift shop, which yielded no additional costs for me—Yes!  A few more photo-ops and a diet Pepsi later, we decided to head back to the bus early.

This excursion included transportation back to the Fort Lauderdale airport as part of the ticket price. The bus ride to the airport was smooth. Before long, we were at the Southwest terminal. The only problem—we could not check our bags until 1:30pm! We sat in the check-in area for at least an hour until Southwest allowed us to check the bags. We would be back to reality and snow in just a few short hours! 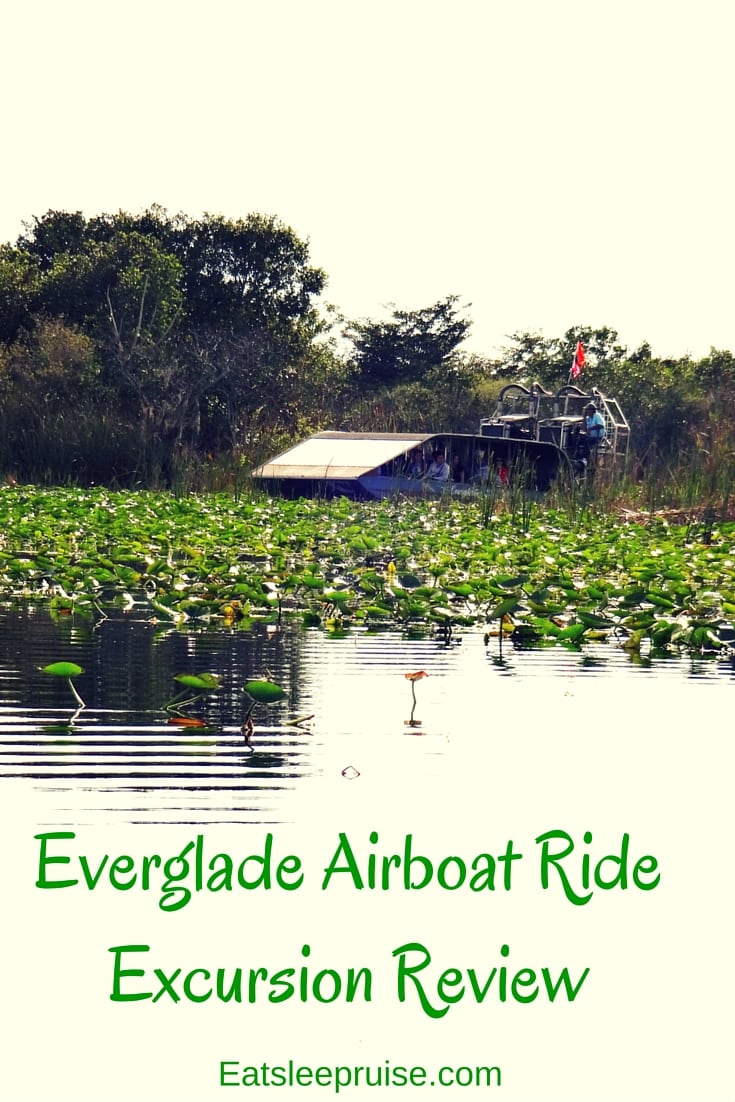 Don Bucolo, or “DB”, loves everything about cruising- the ocean, the food, and the atmosphere. While he may be obsessed with doing extensive amounts of research on ships and all elements of a cruise, Don enjoys sharing his new found knowledge with fellow cruisers. When he is not sailing the high seas, he does whatever his wife tells him to do-it only took 10 years to realize this.
Don
Previous Post « Need a Vacation? Do a Hometown Excursion TODAY!
Next Post Keep Calm and Cruise On….Healthfully! »