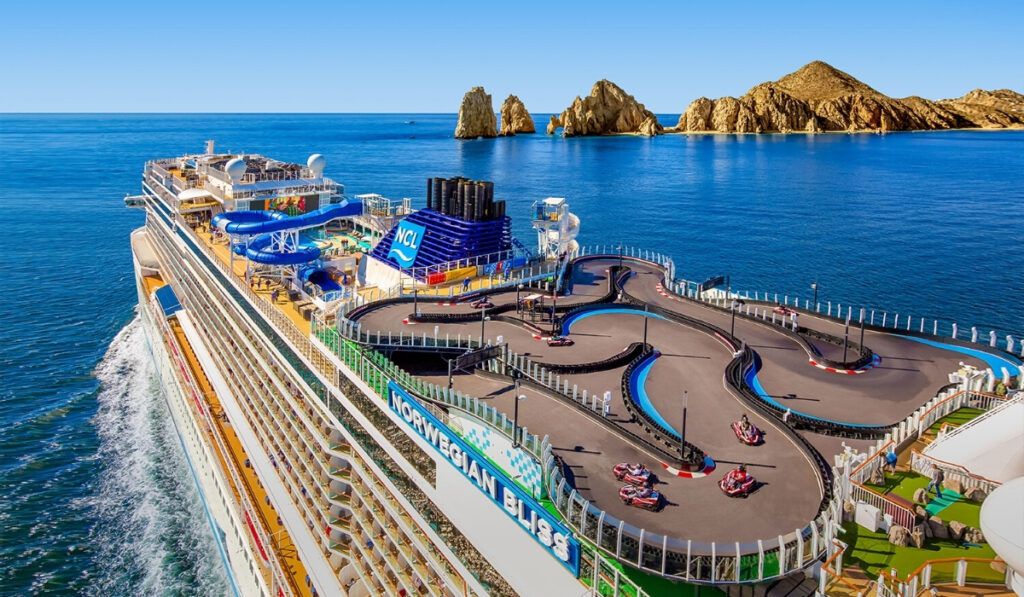 MIAMI (Oct. 25, 2021) – Norwegian Cruise Line (NCL), the innovator in global cruise travel continues its Great Cruise Comeback across the globe with the restart of its seventh vessel, Norwegian Bliss, sailing week-long voyages to the Mexican Riviera from Los Angeles.

Norwegian Bliss, one of the most successful ships ever launched in the company’s 54-year history will be the Brand’s second vessel sailing from the West Coast following the celebrated restart of her sister ship Norwegian Encore, which resumed voyages to Alaska from Seattle in August 2021. On Sunday, Oct. 24, 2021 Norwegian Bliss’ crew members welcomed eager and excited guests as they embarked to sail the majestic Mexican Riviera while looking forward to enjoying unforgettable onboard experiences including world-class fare across its 19 dining options, 20 bars and lounges, a two-level racetrack with the Bliss Speedway and Broadway-caliber entertainment including “Six: The Musical,” which premiered onboard Norwegian Breakaway before hitting the stage on Broadway in March 2020.

“Norwegian Bliss has been one of the industry’s game changers setting multiple world records on the West Coast, including being the largest ship to be christened in Seattle, homeport in Los Angeles, call to San Francisco, and traverse the new locks of the Panama Canal from both the Pacific and Atlantic oceans,” said Harry Sommer, president and chief executive officer of Norwegian Cruise Line. “Having her make her long-awaited return from the ‘City of Angels’ sets another landmark in our Great Cruise Comeback journey as we reignite half of our fleet and continue delivering unforgettable guest experiences from one of the premier destinations on the West Coast.”

Norwegian Bliss will sail from the Los Angeles World Cruise Center, offering week-long voyages and five-day sailings to the Mexican Riviera, visiting marquee Mexican ports including Cabo San Lucas, Puerto Vallarta, Mazatlán, and Ensenada, Mexico. On Jan. 21, 2022 she will embark on a 14-day journey crossing the Panama Canal and making port calls to notable destinations including Cabo San Lucas, Mexico; Puntarenas (Puerto Caldera), Costa Rica; and Cartagena, Colombia before making her way to the cruise capital of the world, Miami.

NCL’s Great Cruise Comeback to redeploy its entire fleet began on July 25, 2021 when Norwegian Jade was the first vessel to set sail with seven-day itineraries to the Greek Isles after a 500-day suspension. Norwegian Encore became the first ship in the Brand’s fleet to return to cruising from the U.S. on Aug. 7, 2021 and is currently sailing her inaugural season of week-long Alaska voyages from Seattle. On Aug. 15, 2021, Norwegian Gem was the first ship in the fleet to resume operations from Miami and set sail from the new Norwegian Cruise Line Terminal at PortMiami with a selection of week-long voyages to the Caribbean and four-day cruises to the Bahamas. Norwegian Epic restarted from Barcelona on Sept. 5, 2021 offering seven-day voyages through Oct. 24, 2021 to the Western Mediterranean. On Sept. 13, 2021 Norwegian Getaway relaunched from Rome, sailing a mix of 10- to 11-day Greek Isles itineraries through Oct. 25, 2021. On Sept. 26, 2021, Norwegian Breakaway commenced its week-long voyages to Bermuda from New York City. Additional ships are scheduled to restart in North America as the fall progresses.

NCL invites travelers to witness its return to cruise journey with its pioneering five-part docuseries “EMBARK – The Series,” showcasing a behind-the-scenes look at the ongoing measures for a healthy and safe return to cruising. The entire first season is available on-demand at www.ncl.com/embark. Watch all five episodes and the full suite of EMBARK content including Stories and Spotlights.

The Company’s fleetwide redeployment will continue in partnership with local governments and are guided by the robust protocols of the Company’s Sail Safe health and safety program, which at its cornerstone includes that all crew and guests must be fully vaccinated to embark for voyages through Dec. 31, 2021. Working with the leading experts of the SailSAFE™ Global Health and Wellness Council, the robust protocols will be regularly evaluated and modified as needed, making science-based decisions to protect guests, crew and the destinations it visits. As protocols evolve and additional information becomes available, updates will be published at www.ncl.com/sail-safe.

For more information about the Company’s award-winning 17-ship fleet and worldwide itineraries, or to book a cruise, please contact a travel professional, call 888-NCL-CRUISE (625-2784) or visit www.ncl.com.

Are you excited to hear that Norwegian Bliss resumes cruising from Los Angeles? Do you have upcoming plans to sail with Norwegian Cruise Line? Drop us an anchor below to share what you love about the brand.

Heidi is a physical therapist by profession, cruise enthusiast at heart, and Princess all the time! She is a self-confessed thrill seeker, obsessive planner, and over-packer. She is always looking for the latest and greatest adventures onboard and ashore, enjoys researching top things to do in ports of call, and loves dressing up for formal nights.
Heidi
Previous Post « Carnival Cruise Line Christens Mardi Gras
Next Post Virgin Voyages Scarlet Lady Mayan Sol Cruise Review »