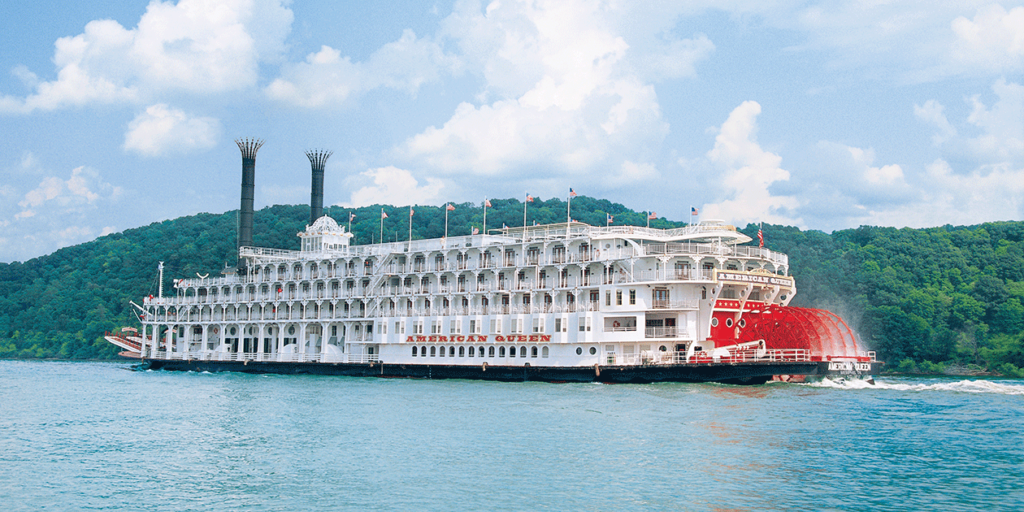 Embracing its new tagline “Discovery Runs Deep,” American Queen Voyages invites travelers to throw away the guidebook and go off the beaten path to discover the unscripted experiences of North America.  New worlds and encounters await guests- from interacting with flinty New England oystermen while warming up over salty fish tales, docking next to Heinz Field, home of the Pittsburgh Steelers, to shadowing marine science researchers from California Polytechnic State University on a Zodiac approaching a secluded cove. New creative elements will also be unveiled in the coming months including a print and digital campaign, a reimagined loyalty program, onboard enrichment offerings and milestone moments.

“Through a decade of transformation, American Queen Voyages has surged from the great American rivers to include lakes, ocean and expedition experiences,” said Shawn Bierdz, president, American Queen Voyages. “Today, we are American Queen Voyages and embrace this simple but important expression – Discovery Runs Deep™. As we move into this new chapter and introduce our version of encounter travel, we uphold the originating vision of our company’s founder and chairman, John Waggoner and his unwavering belief in the renaissance of U.S. river cruising and close-to-home adventures.”

Integral to the creative rebrand effort is the interplay between data and creativity. The most iconic part of the legacy, is the paddlewheel, and it is deconstructed into individual paddles to establish a pattern that represents its movement. The creative team behind American Queen Voyages established an algorithm that is informed by measuring the distance traveled and varying nautical speeds on any given vessel. By visualizing the paddles through a generative system informed by the algorithm, an identity was created with endless possibilities of discovery – yet establishing memorable brand recognition. This identity system is being used to create various branding materials like the website, digital experience, posters, guidebooks, merchandise for staff, agents and passengers.

Embracing its Mississippi River and paddlewheel roots, the newly imagined brand celebrates its growth from operating its singular namesake vessel, the American Queen, to expanding to a seven-vessel fleet with the acquisition of Victory Cruise Lines. Looking ahead, American Queen Voyages will offer eight vessels by 2023 and plans to deliver encounter-driven travel experiences throughout America’s heartland rivers, the Great Lakes and Pacific Northwest, as well as Canada and the Eastern Seaboard, Mexico and the Yucatán Peninsula and the wilds of Alaska.

American Queen Voyages River is led by namesake U.S.-flagged American Queen®, the largest, most opulent riverboat in the world. Longer than a football field, towering six decks in height and laced with fanciful gingerbread trim, she is a marvel of modern engineering. Her journeys through the heartland offer a unique perspective on America’s history, culture and landscape with convenient departures from America’s river port cities, including Memphis, New Orleans, Cincinnati, Louisville, Pittsburgh, St. Louis and Minneapolis. In April 2014, American Queen Steamboat Company began serving the Pacific Northwest with the grandeur of the American Empress® , and added the American Duchess™to the Mississippi River in August 2017. The newest and fourth boat to join the American Queen Steamboat Company fleet is the American Countess™, which made her debut in March 2021 and sails the Mississippi, Ohio and Tennessee rivers.

Formerly Victory Cruise Lines, American Queen Voyages Lakes & Ocean encompasses the brand’s voyages to Canada, the Great Lakes, New England and Eastern Seaboard and Mexico and the Yucatán Peninsula. Sailing on identical 202-passenger ships, formerly Victory I® and Victory II™   and to be renamed Ocean Voyager and Ocean Navigator  to American Voyages Lakes & Ocean offers award-winning, small-ship cruising with immersive shore excursions and onboard programming. With itineraries widespread throughout coastal North America, American Queen Voyages Lakes & Oceans reveals the diverse cultures of the U.S. through some of its most historic ports including Mackinac Island  and showcases a different perspective of New England’s leisure side. Cities like Charleston and Savannah offer a glimpse into coastal southern living, while the islands of the Bahamas feature a tropical oasis

American Queen Voyages Expedition launches the brand’s advance into expedition cruising. Comprised of newly built 186-passenger vessels, created for intimate access with an innovative X-Bow design, American Queen Voyages Expedition will operate all-inclusive cruises to Alaska on the Ocean Victory™ in 2022 and the Ocean Discoverer™ in 2023. The brand new, expedition style Ocean Victory will traverse 12 and 13-day journeys through the less-traveled regions of Alaska’s Inside Passage led by a seasoned expedition team. Like-minded explorers will deploy kayaks and Zodiacs with expedition leaders, view wildlife from sliding observation platforms, witness marine research by California Polytech University students in real-time and have engaging discussions with First Nation leaders. Accommodating only 186 guests, the focus of the expedition program is exploring Alaska up close.

What do you think of American Queen Steamboat Company’s re-branding? Would you consider booking a trip with the newly re-imagined American Queen Voyages? Drop us an anchor below to share your experiences cruising the U.S. waterways.

Don Bucolo, or “DB”, loves everything about cruising- the ocean, the food, and the atmosphere. While he may be obsessed with doing extensive amounts of research on ships and all elements of a cruise, Don enjoys sharing his new found knowledge with fellow cruisers. When he is not sailing the high seas, he does whatever his wife tells him to do-it only took 10 years to realize this.
Don Bucolo
Previous Post « Atlas Ocean Voyages Offers Complete Peace of Mind With Atlas Assurance
Next Post Top Norwegian Cruise Line Restaurants »