See all the island highlights including animal encounters with monkeys and sloths with the Victor Bodden Fun n Sun Tour in Roatan, Honduras. 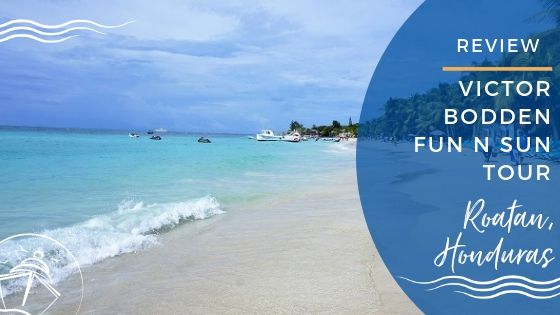 During our recent trip onboard Symphony of the Seas, we decided to explore more of Roatan, Honduras. After reviewing our options for island attractions, we opted to book the Victor Bodden Fun n Sun excursion. We have returned from our trip and have our honest review of this local tour.

On a previous trip to Roatan, we booked an excursion through the cruise line to Gumbalimba Park. This tour was fun, but it was limited as we did not get to do or see much else of the island. This time around we wanted something more inclusive. 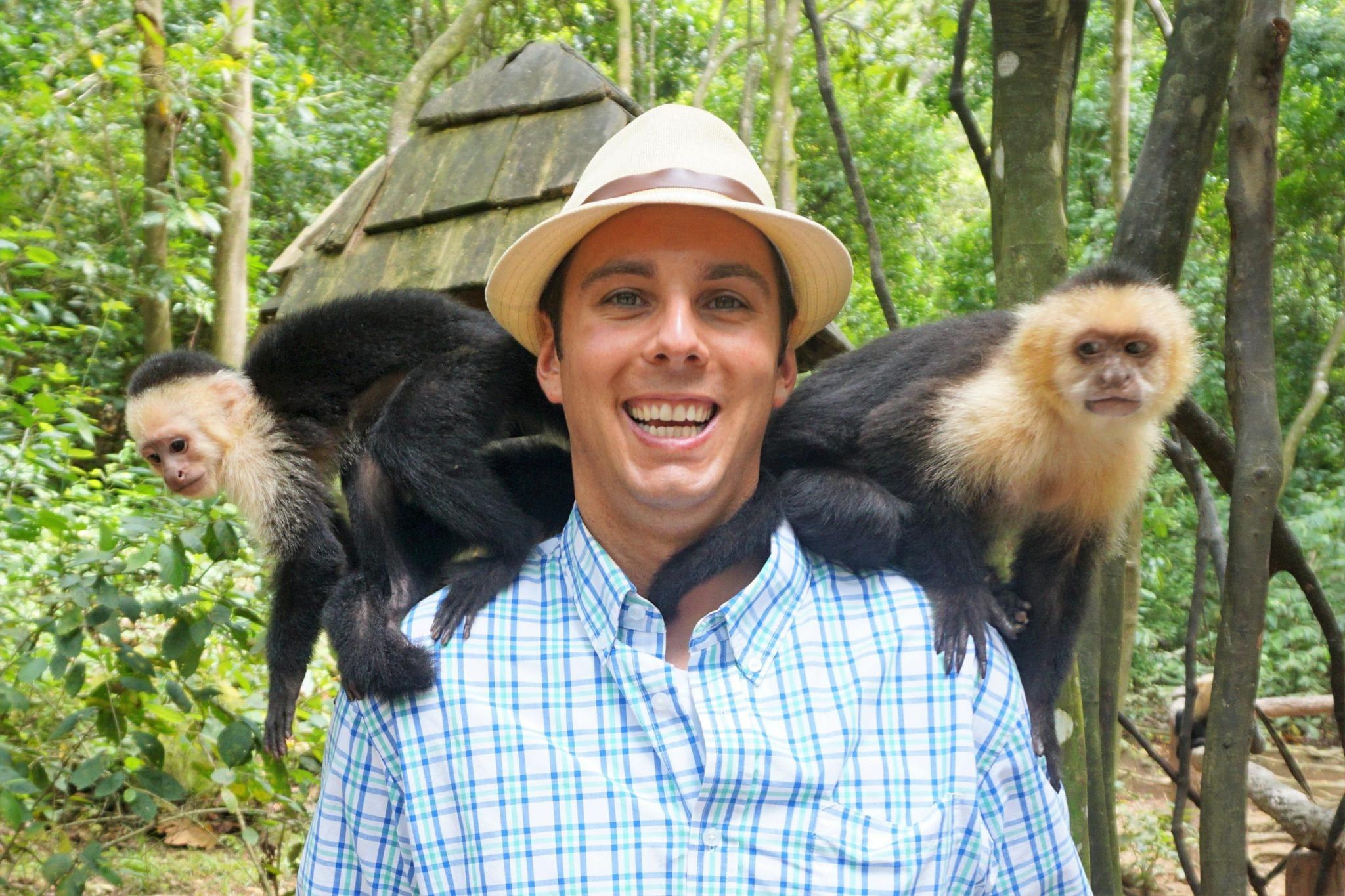 Upon recommendations from fellow cruisers, we browsed Victor Bodden’s website. He offered a variety of different tours and experiences at very reasonable prices. The Fun n Sun toured was priced at only $30. Honestly, I was sold after reading that the island tour included an animal encounter with sloths!

We contacted the tour company using the online form about 3.5 months before our cruise. We received a reply the next day and then subsequently reserved our spot by replying to the email.

The tour company does not require a deposit in advance. Just make sure to have the full payment in cash on the day of the tour.

Related Posts: Top Things to do in Roatan, Honduras on a Cruise

Let’s Get This Tour Started

The booking instructions indicated that the tour would depart an hour after the ship arrives in port. For this trip on Symphony of the Seas, we arrived promptly at 8 am. Of course, we were ready with bags packed and breakfast completed in time to be off the ship for about 8:15 am. This gave us a little time to walk around the rather small port area and grab some photos of the ship. 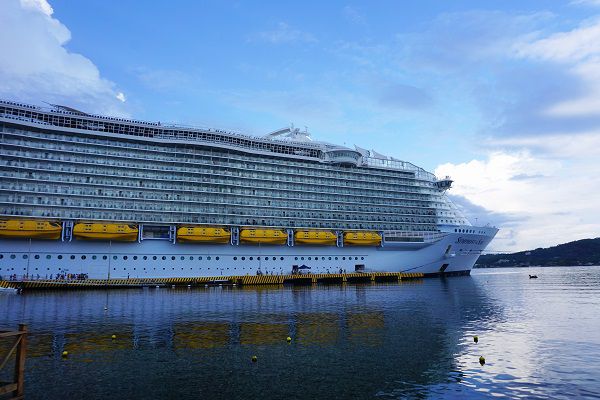 We arrived at the kiosk with the Victor Bodden sign at promptly 8:45 am. Checking in, we were told to return in 15 minutes. Upon return, we were sorted into a group and proceeded to wait another 15 minutes before we were introduced to our driver and escorted to a minivan that was wedged between vehicles.

Do not even ask us how our driver managed to maneuver the van through the tight, single lane that was flanked by other tour vehicles. Somehow, we made it out without a scratch. Departing the port area slightly before 9:30 am, we first headed east on the island. 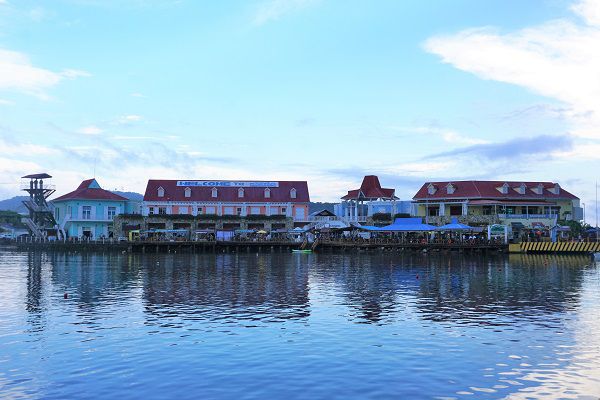 Seeing Both Sides of the Island

Upon leaving the restricted area, we were near the “downtown” where our driver pointed out sites like the local mayor’s office, schools, churches, and other public buildings.

There was only one photo stop during the first 30 minute stretch. This was a quick pull over to the side of the road to see the large shipwreck in Mahogany Bay. 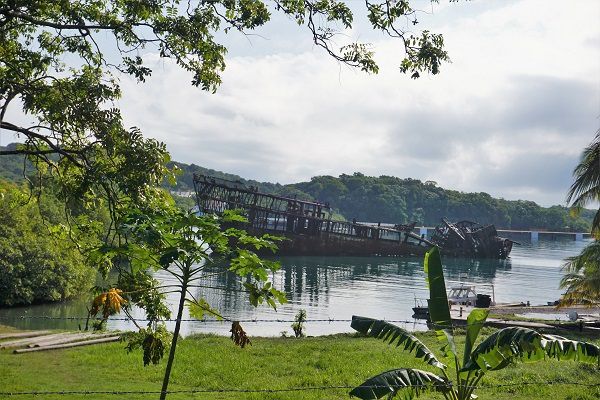 Given that this is the other area where cruise ships dock, I joked that this must be a Carnival ship. In fact, there are several shipwrecks found throughout the coast of Honduras. Some of these locations are quite popular for snorkeling and scuba diving.

The drive to the East Side of the island included drive-bys of many random sites. Among the highlights were the former mayor’s house, which was a massive white mansion, and the jail, a place I certainly did not want to visit. Given our seating arrangement, it was tough to get photos of any of these landmarks.

We eventually turned around and headed back towards the center of the island and on to West End. 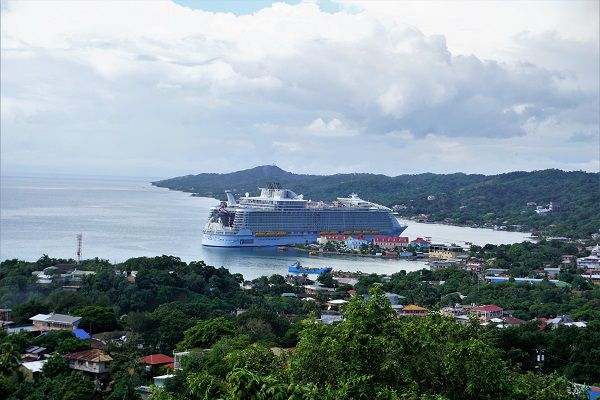 Around 10:30 am, we stopped at a lookout point overlooking our cruise ship and the port. There were a few vendors here selling an assortment of carved wood artifacts, jewelry, liquor, and the usual Caribbean island fares. The stop lasted less than 15 minutes. It was good to stretch our legs and grab some photos of our ship and the landscape.

As we drove through this section of the island, it looked more familiar to us. We entered Lawson Rock, a ritzy area with timeshares and other luxury homes. Supposedly, one of the homes was owned by Sylvester Stallone.

Right around 11 am, we pulled up to the rather busy Monkey Business facility for the animal encounter portion of the tour.

Hanging Out With Our New Friends

For a small area, there were certainly several tour groups at the animal sanctuary. After checking in and receiving a wristband, we were introduced to a new guide who would show us around the different animal areas. 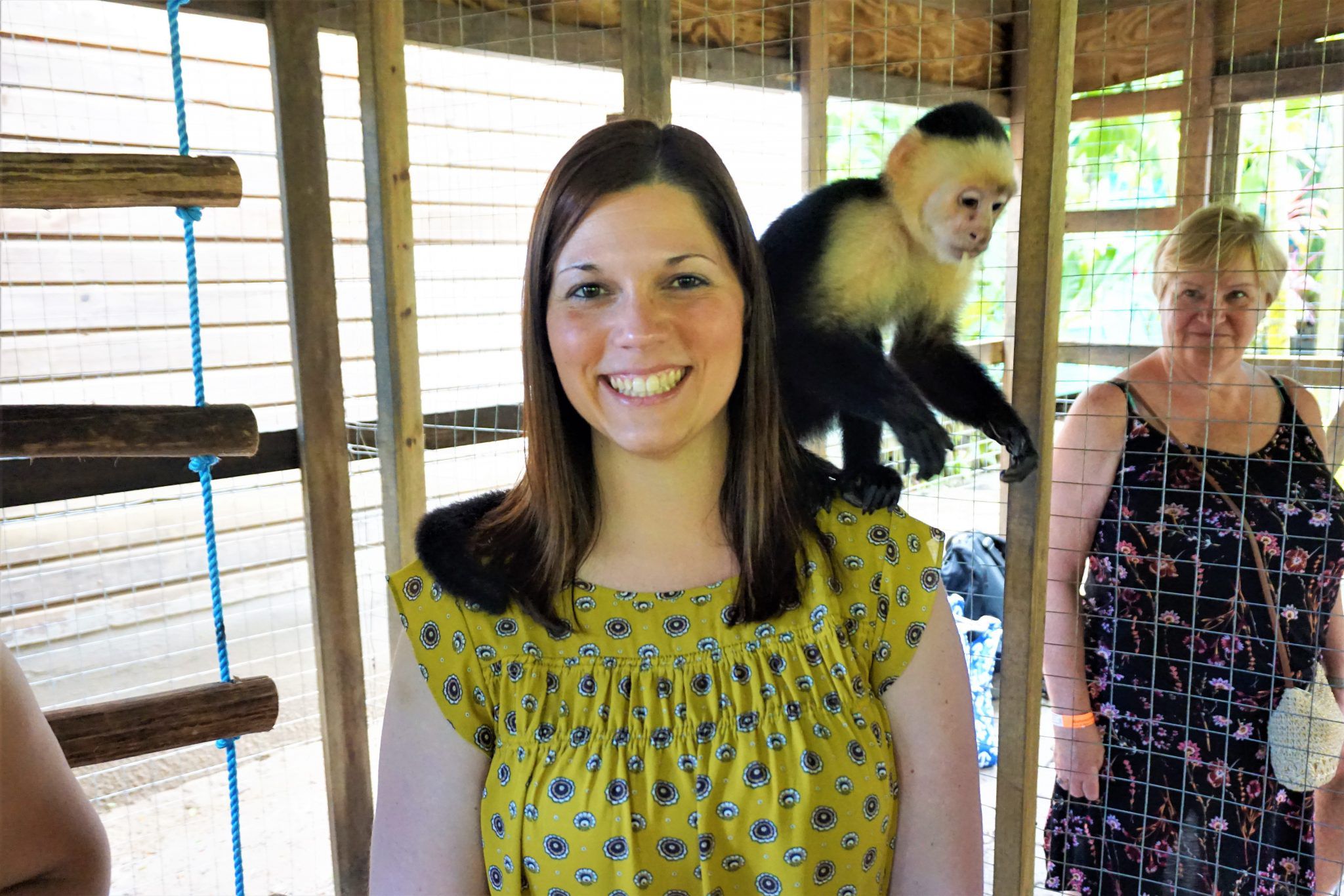 Honestly, this portion of the tour felt a bit rushed and disorganized. There are several different stations to visit and interact with the animals. We were able to meet the monkeys, macaws, and the main attraction, the sloths.

All of these areas were congested. It was difficult to get pictures without tons of other people in your photos. With the sloths having only a select window to give hugs, this area was the most crowded.

We were only in the animal sanctuary for about 20 minutes. While it was really cool, we both agreed that it was a bit of a letdown. We would have liked more time here. I did manage to get one good picture with a sloth though. 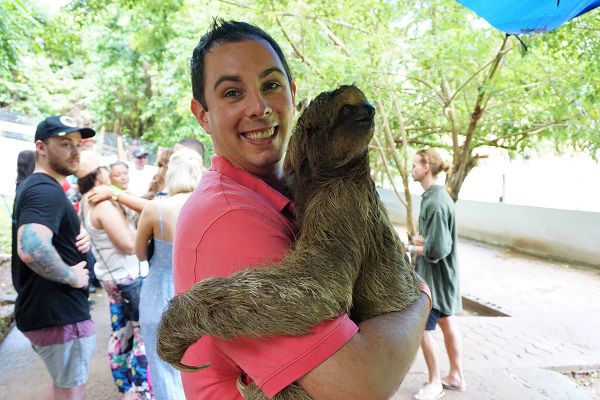 During the quick bathroom break before our exit, I found a t-shirt in the gift shop to commemorate the event. Yes, the shirt had sloths on it! With the entire group loaded back into the van, we headed to the last stop of our tour- a beach break.

It was approximately a 20-minute drive from the animal sanctuary to the beach club on West Bay. Our tour guide escorted us to the beach club and showed us the reserved area. The tour fee included a lounger and access to the WiFi.

Given the location of the available chairs, there was no way I could get any sun. I ventured down the beach to grab a few photos. The water was crystal clear, and the sand was soft and clean. I could now see why there are so many beach clubs lining this area. 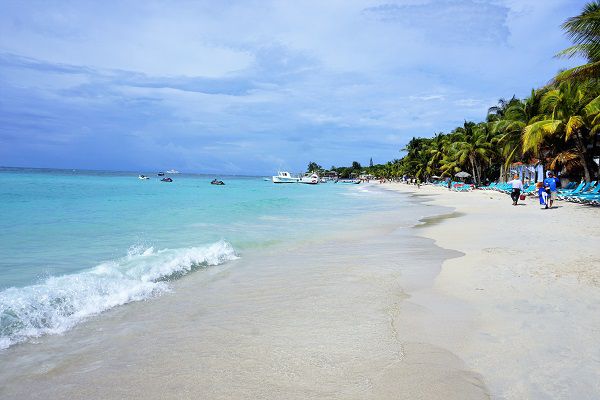 The original tour description stated that we would spend about an hour at the beach; however, it ended up being a 2-hour beach break. Perhaps if we had a better location on the beach, we would have welcomed the extra time.

We left the resort around 2:30 pm to head back to the ship. We hit some traffic along the way, making it a longer than expected trek. 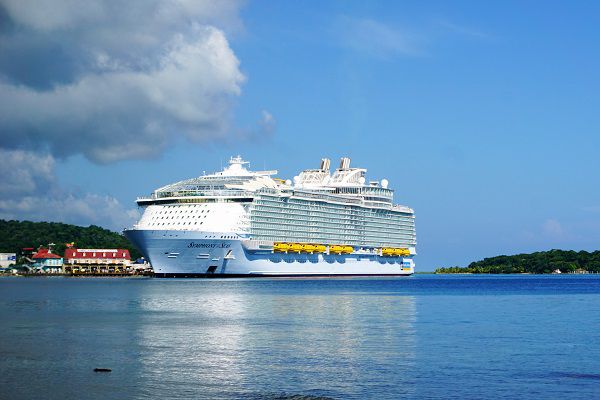 This tour was a comprehensive look at the island. It was a great overview for anyone interested in learning more about Honduras, the people, and the culture. Although, we would have liked a few more photo stops along the way.

The animal encounter portion of the tour was fun but could have been executed more efficiently. We enjoyed interacting with the monkeys, sloths, and macaws but would have liked more time at the animal sanctuary. 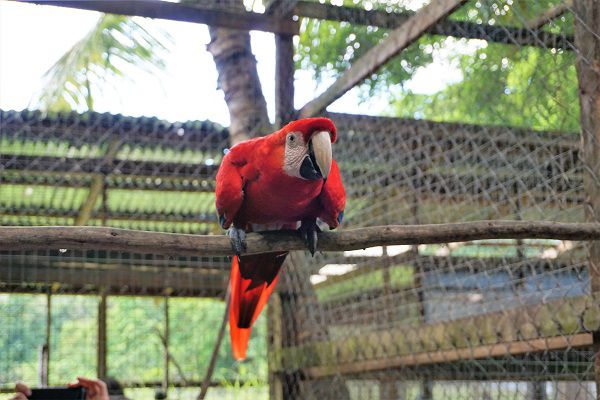 Having an extended beach break as part of the tour was nice after driving around in a van for several hours. We just wish the resort had more loungers in direct sunlight on the beach.

Overall, we enjoyed the tour, and our guide was friendly and knowledgeable. If you are visiting Roatan on an upcoming cruise, you should consider an excursion with Victor Bodden’s local tour company. We would consider booking a private tour in the future.

Have you visited Roatan, Honduras on a cruise? Have you completed the Victor Bodden Fun n Sun Tour or a similar excursion? Drop us an anchor below with your review of this island.

Don Bucolo, or “DB”, loves everything about cruising- the ocean, the food, and the atmosphere. While he may be obsessed with doing extensive amounts of research on ships and all elements of a cruise, Don enjoys sharing his new found knowledge with fellow cruisers. When he is not sailing the high seas, he does whatever his wife tells him to do-it only took 10 years to realize this.
Don
Previous Post « Celebrity Solstice Cruise Ship Scorecard Review
Next Post Top Things to Do on Celebrity Solstice »