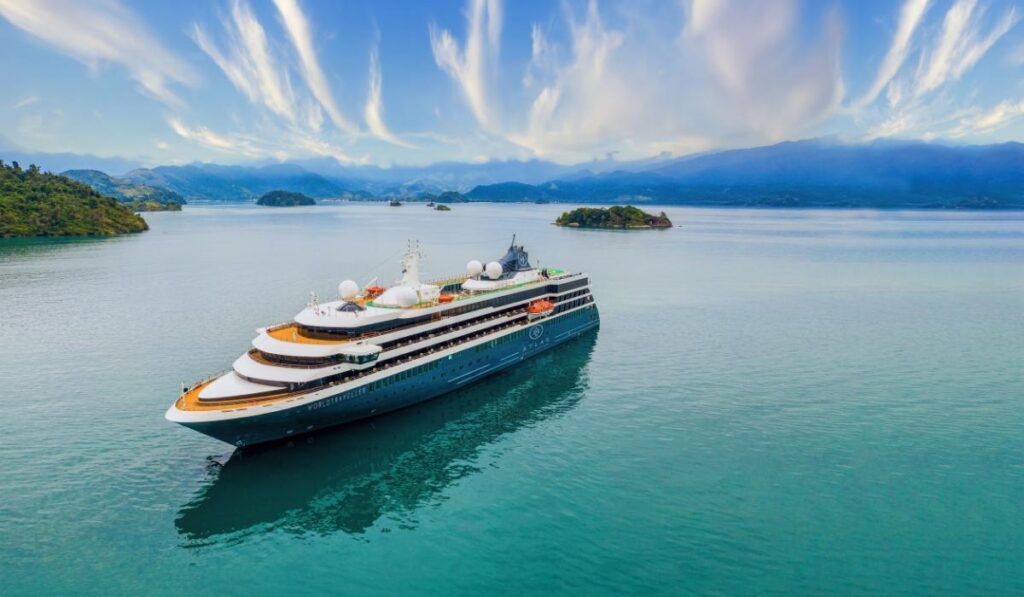 Travelers Save Up to $1,000 Per Stateroom and 15 Percent for Consecutive Voyages

World Navigator will sail Africa, and the Mediterranean and Adriatic Seas, while World Traveller will cruise Central and South America, the Caribbean, Western Africa and Western Mediterranean, Ireland and the British Isles, the Norwegian Fjords, Iceland, Greenland, and the Arctic.

Atlas adds 60 new destinations for the season and features overnight stays in 46 individual ports, delivering more immersive experiences in small and off-the-beaten-path destinations unreachable by larger ships. For a limited time, Atlas Ocean Voyages is offering savings of up to $1,000 per stateroom, and up to 15 percent additional savings when booking two or more consecutive voyages by March 31, 2022. For more information, please visit www.AtlasOceanVoyages.com.

“With World Navigator and World Traveller’s new 2023 voyages, Atlas Ocean Voyages continues to offer travelers more choices of luxe-adventure experiences in some of the world’s most fascinating places,” said Alberto Aliberti, President of Atlas Ocean Voyages. “Nearly all ports-of-call are non-repeating and provide travelers the opportunity to combine consecutive voyages for extended and in-depth regional immersions and save. On board, guests will enjoy Atlas’ signature casually elegant, all-inclusive style for a luxurious, once-in-a-lifetime adventure.”

After completing her second Antarctica season on March 31, World Navigator charts a course eastward from Ushuaia, Argentina, to Cape Town, South Africa, via the South Georgia and South Sandwich Islands and the very remote outposts of Ascension and Tristan da Cunha Islands in the South Atlantic. The ship then heads north along Africa’s west coast to the Canary Islands and Morocco before crossing the Strait of Gibraltar into the Alboran and Mediterranean Seas. The May 10 voyage includes two full days in Casablanca, Morocco, to provide guests additional time to tour more-inland Marrakesh.

World Navigator also delivers the most compelling Mediterranean destinations throughout Spain, France and Italy. A special eight-night Grand Prix voyage, departing May 21, features two nights in Monaco to catch the race and join in the celebrations. In the heart of the season, travelers can also choose luxury adventures that unveil the vibrant colors and cultures of the Adriatic, Greek Isles, and Turkey. World Navigator then retraces her course westward in early autumn through the Mediterranean and continues onward to Brazil and Argentina to arrive at Ushuaia on November 9.

Alternatively, the newly launched World Traveller heads north from Ushuaia on March 26 to bring guests to explore the heritage and natural splendor along the Chilean and Peruvian coasts. Travelers can also delve into the ecological grandeur of Panama, Costa Rica and Nicaragua on a 12-night itinerary departing April 28. Offering another chance to cross off a bucket-list experience, World Traveller will transit the Panama Canal and cruise the Southern Caribbean before crossing the Atlantic to the Canary Islands.

From the Canary Islands, World Traveller features two 10-night voyages that combine the archipelago with Morocco. Both departures include overnight calls in Casablanca, but the June 6 voyage includes a call at Safi to access Marrakesh, while the June 16 voyage includes calls at Cadiz, Spain, and Portimao, Portugal. The ship then continues north to the British Isles, Ireland, Norwegian Fjords and Greenland for July.

World Traveller crosses the north 66th parallel in August to offer multiple opportunities to see the Northern Lights, including three Arctic expeditions in Svalbard. Guests can marvel at the archipelago’s majestic glaciers, fjords and mountains, and catch sightings of a wide range of wildlife, including birds, whales, polar bears, reindeer, walrus and the elusive arctic fox. Guests can also choose the subsequent Iceland circumnavigation voyage to witness the contrast of land of fire and ice. The ship then charts her course southbound via the British Isles, Ireland, France and Spain to conclude her season on October 16 at Lisbon.

Atlas Ocean Voyages is a luxe-adventure, expedition cruise line designed for discerning, fun-seeking travelers to immerse in unique and awe-inspiring moments in remote and captivating destinations. World Navigator, launched in August 2021, and World Traveller, launching October 2022, both feature 98 suites, solo suites with no single supplements, and staterooms, and is the line’s first two small expedition ship, bringing travelers to smaller, authentic and exclusive locales. World Navigator will cruise the Mediterranean, Northern Europe, and Iceland, Greenland and The Arctic in summer 2022; Central and South America in the autumn; and return to Antarctica for her winter 2022-23 season. In winter 2023, World Traveller will sail her inaugural season in Antarctica. Three additional sister ships, World Seeker, World Adventurer and World Discoverer, will join the fleet through 2024.

What do you think of the news that Atlas Ocean Voyages opens Summer 2023 sailings for two ships? Have you considered booking a trip with this luxe-adventure cruise line? Drop us an anchor below to share your upcoming cruise plans.

Heidi is a physical therapist by profession, cruise enthusiast at heart, and Princess all the time! She is a self-confessed thrill seeker, obsessive planner, and over-packer. She is always looking for the latest and greatest adventures onboard and ashore, enjoys researching top things to do in ports of call, and loves dressing up for formal nights.
Heidi
Previous Post « Carnival Cruise Line Continues Birthday Celebration in Miami
Next Post Royal Caribbean Introduces Hotel Booking Engine »