American Cruise Lines resumes U.S. cruises with 6 of its 13 ships in the fleet now sailing in 8 different states across the country. 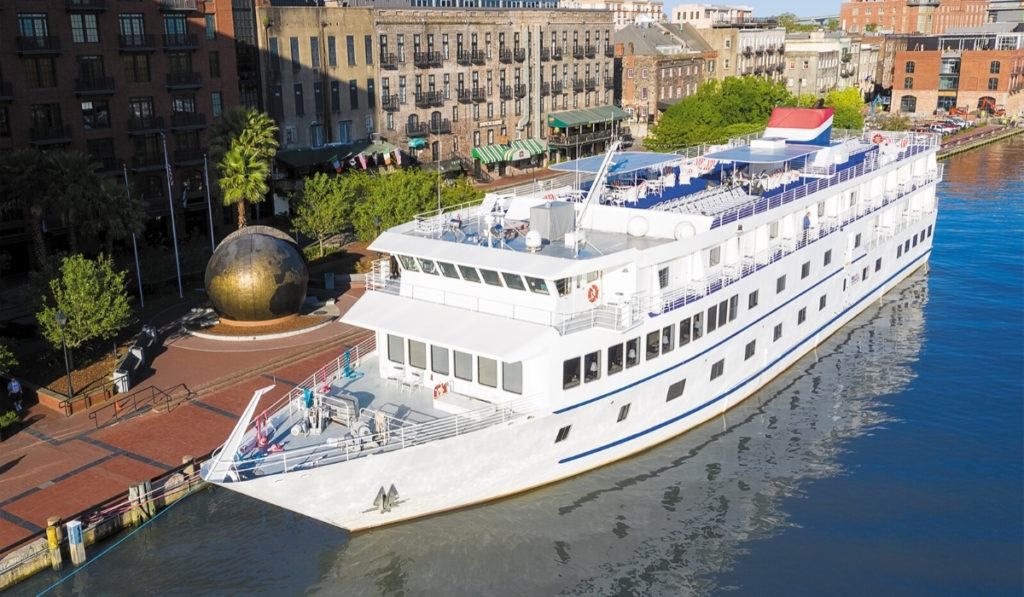 American Cruise Lines:
First to Cruise the U.S.A. and the Only Line Cruising the East Coast

Guilford, CT—April 19, 2021— American Cruise Lines announced today that its 2021 season has begun with the first 6 of its 13 ships now operating in 8 different states around the country. American became the first cruise line to resume operations in the U.S. when the Independence sailed from Florida on March 13. Days later, American also began cruises on the Mississippi River and continues to resume small ship operations across the country.

American Cruise Lines is the only line cruising on both the nation’s coasts and rivers, and has the largest U.S. registered fleet in the country. It is the only line currently cruising the East Coast and one of a few lines that is able to sail in Alaska this summer. American is scheduled to have their full 13-ship fleet sailing in all U.S. regions later this spring—from Alaska to Florida and the rivers in-between.

Unique among small domestic lines—American has doubled in size since 2017, remains 100% family owned, builds all its ships in the U.S.A. at its affiliated shipyard, and operates the largest fleet of 100% U.S.-flagged cruise ships and riverboats in the country, each accommodating fewer than 200 passengers. These distinctions enable the Line to offer exceptional small ship itineraries in over 30 U.S. states which visit only domestic ports-of-call.

Over the past year, American has worked closely with both local and state officials, to safely bring back domestic cruising throughout the United States. All American’s 2021 cruises have been wonderfully received by guests and continue to operate seamlessly with new safety protocols in place and an all American crew.

“We are proud to have been the first line back on the water in the U.S. As the only cruise line visiting 30 states, we have taken great care to resume cruises safely in each region by working closely with state and local partners.” said Charles B. Robertson, President & CEO of American Cruise Lines. “The popularity of small ship domestic cruising was stronger than ever before the pandemic and 2021 demand is already at new record levels.”

American’s 2021 cruises include a regimen of new safety protocols, but otherwise provide the same personalized guest experience they are renowned for. All the Line’s small ships offer over 350 sq./ft. per passenger, but American is voluntarily operating with additional occupancy restrictions to further enhance the space on board. The Line has implemented industry-leading COVID-19 mitigation practices, which include pre-boarding testing and medical staff on board all cruises.

American Cruise Lines offers the finest river cruising and coastal cruising in the U.S.A. Year after year, American continues to launch the newest small ships and uniquely curated itineraries for exploring and Cruising Close to Home.™ On all American’s cruises, guests discover the history, spirit, and culture of the United States aboard the most sophisticated fleet of modern riverboats and small cruise ships in the country. American operates 13 ships, all accommodating just 100-190 passengers, which cruise in 30 states around the country.

For reservations or to learn more about American Cruise Lines 2021-2023 Seasons Please call 1-800-814-6880 or visit: www.AmericanCruiseLines.com

Given that American Cruise Lines resumes U.S. cruises, would you consider booking one of these voyages closer to home this summer? Have you cruised any of the rivers of North America? Drop us an anchor below to share your summer 2021 vacation plans.

Heidi is a physical therapist by profession, cruise enthusiast at heart, and Princess all the time! She is a self-confessed thrill seeker, obsessive planner, and over-packer. She is always looking for the latest and greatest adventures onboard and ashore, enjoys researching top things to do in ports of call, and loves dressing up for formal nights.
Heidi
Previous Post « Viking Adds Additional Mississippi River Cruises Due to Strong Demand
Next Post AmaWaterways Launches 2023 River Cruise Reservations »