Home » Top Things to Do Near Berlin, Germany on a Cruise

Are you are planning a cruise to the Baltic capitals that stops in Warnemunde (Berlin)? If so, check out our Top Things to Do Near Berlin, Germany on a Cruise. 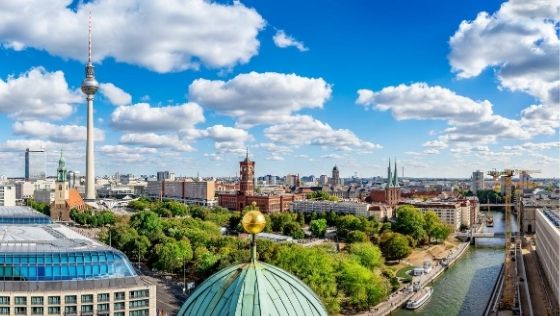 If you are planning a cruise to the Baltic capitals that includes a stop in Germany, your cruise ship will most likely be docking in Warnemunde. This port of call is located on the Baltic Sea and is about 2.5 to 3 hours away from Berlin.

While many cruisers choose to make the trek to the capital city, there are also other tour options that are located closer to the cruise port. If you are trying to decide what to do during your trip, we have put together our list of the Top Things to Do Near Berlin, Germany on a Cruise.

If you decide to journey to Berlin, be prepared for a 12+ hour day. Tours will include transportation to and from the cruise port on either a bus or a train. Once in Berlin, you will have the option to explore on your own or set off on a Berlin Highlights Tour as part of an organized shore excursion. During your tour, you will visit popular sights like the remnants of the Berlin Wall, Checkpoint Charlie, the Brandenburg Gate, and the Reichstag. You will likely also visit several of the popular public squares like Gendermentmarkt, Belbelplatz, and Alexanderplatz.

Your tour might even include some time for shopping or sampling some of the local cuisine.

On a Berlin Highlights Tour, you are also likely to visit the Berlin Cathedral, as well as the many memorials located throughout the city like the Holocaust Memorial or Neue Wache. With so much history, there are several culturally significant museums to visit too.

From the Jewish Museum to the Topography of Terror Museum located on the former site of Nazi regime buildings, you will need to carefully select how you want to spend your day. There is also Museum Island, a UNESCO World Heritage site that is home to five world-renowned museums.

Located much closer to the cruise port than Berlin, Rostock offers its own history and charm. Rostock is the largest city in Mecklenburg and is considered one of Germany’s most beautiful Hanseatic cities.

During your tour, you will pass highlights such as the 13th-century Town Hall, as well as St. Mary’s Church. This is the city’s most famous church. Inside the church, you can admire one of the largest single stained glass windows in Europe and learn about its astronomical clock built in 1472.

Other sights include the nearly 600-year-old Rostock University, the Abbey of the Holy Cross, the Fountain of Joy dedicated to the city’s rebirth after World War II, and the Kröpelin Gate which is one of the only surviving gates that helped fortify the city during the Middle Ages.

Afterwards, you can set off to Trotzenburg microbrewery, one of the last regional breweries that still produces its own beer. At the microbrewery, you will learn about beer brewing and enjoy samples in the tasting room.

Established in 1936, Sachsenhausen was one of the first and most notorious concentration camps built by the Nazis and a training center for SS soldiers. It is located in Oranienburg, about 30 minutes north of Berlin. Over 200,000 people passed through its gates between 1936 and 1945.

Many inmates died from exhaustion, disease, malnutrition, or pneumonia from the freezing winter. Many were also executed or died as the result of brutal medical experimentation. Sachsenhausen was also the site of one of the largest counterfeiting operations during World War II, forcing inmates to forge American and British currency.

The camp was liberated by Allied troops in 1945. Today, the dark memory is kept alive as a memorial and place of reflection. Several structures survive or have been reconstructed, including guard towers, the camp entrance, crematory ovens, and the camp barracks.

During a guided tour, you’ll learn the history and the horrors as you walk by these landmarks. Notable sites include Tower A with the infamous slogan “Arbeit macht frei” (work makes you free), Barracks 38 and 39 displaying the everyday life of prisoners, and Station Z displaying an execution trench, the foundation of the gas chambers, the burial ground with ashes of victims, and the crematorium.

Built on a tiny island at the center of Lake Schwerin, Schwerin Castle was the home of the dukes of Mecklenburg for centuries and currently serves as the seat of the state Parliament.

Schwerin Castle is located approximately 90 minutes away from the cruise port.

Upon arrival at this fairy-tale like palace, you will first cruise around the island for picture perfect views. You can then tour the castle itself to marvel at its stunning architecture and museum exhibits.

During a guided tour, you will explore the former living and social quarters which now house sculptures, pictures, furniture, weapons, and jewelry from the time period. You will also hear stories about the House of Mecklenburg and its grand lifestyle. Perhaps, you might even hear about Petermannchen, the castle’s ghost. You can then stroll the palace gardens, especially the castle garden which is considered one of the most impressive baroque gardens in Northern Germany.

Your tour might also include a visit to the historic downtown Schwerin, which experienced only minor damage during WWII. Here, you can set your sights on the 19th-century Tudor-style Schwerin Town Hall, the Gothic Schwerin Cathedral, and the old market for shopping or a bite to eat in a café.

Bad Doberan is another charming town located a few miles inland from the Baltic Sea. It was one of the first settlements in Mecklenburg and the summer residence of the dukes of Mecklenburg.

Here, you can visit the Doberan Minister, one of Germany’s largest medieval churches and most impressive examples of Gothic architecture. You will be able to view several well-preserved features, such as the main altar (the oldest winged altar), 700 year old choir stalls, the monumental cross, the medieval stained glass windows, and more.

Next, you can hop onboard the Molli, a narrow-gauge steam-powered train. This scenic 40-minute journey takes you through tree-lined landscapes and quaint towns. From Bad Doberan, you will travel towards the coastal resort of Heiligendamm, then on to Kuhlungsborn, another seaside resort.

Here, you can enjoy some time on the beach, stroll the wooden pier and sea bridges, admire the lovely architecture, or just relax and enjoy some refreshments.

Have you taken a Baltic capitals cruise that stopped in Warnemunde (Berlin), Germany? What are your favorite things to do near Berlin, Germany on a cruise? Drop us an anchor below to share your experiences visiting this historic European city.

Heidi is a physical therapist by profession, cruise enthusiast at heart, and Princess all the time! She is a self-confessed thrill seeker, obsessive planner, and over-packer. She is always looking for the latest and greatest adventures onboard and ashore, enjoys researching top things to do in ports of call, and loves dressing up for formal nights.
Heidi
Previous Post « 10 Hidden Costs of Cruising
Next Post Cruises News August 21st Edition »