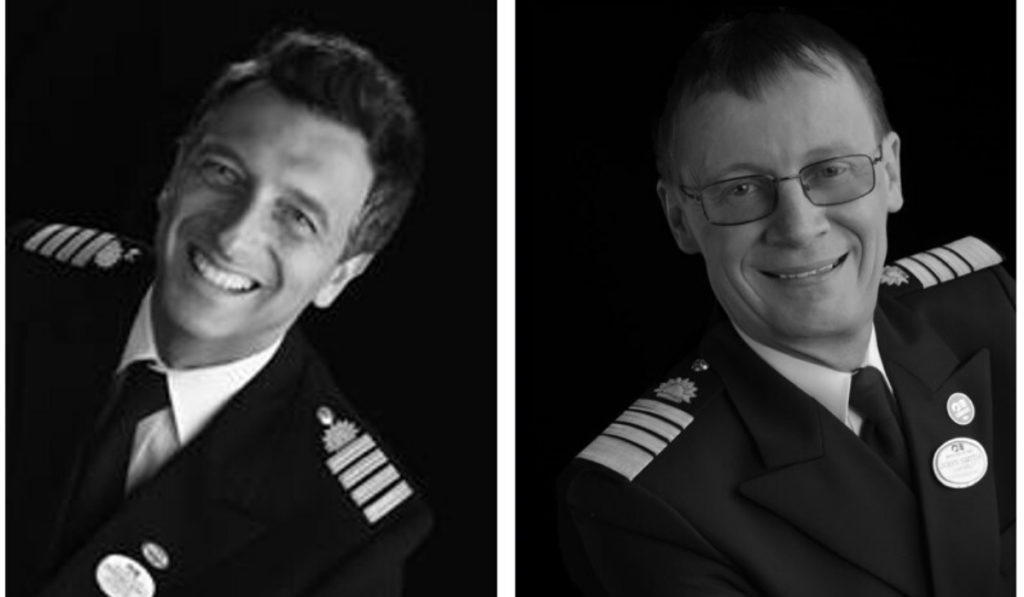 SANTA CLARITA, Calif., (July 21, 2021) – In fewer than 200 days, the newest Princess Cruises ship – Discovery Princess – will debut at the Port of Los Angeles in spring 2022, for an inaugural season of Mexican Riviera and California Coast cruises.

Discovery Princess is being built by Italian shipbuilder Fincantieri and will carry 3,660 guests. Captain Arma will officially bring the ship into service from the shipyard in Monfalcone, Italy, joined at the launch by an experienced team of executive officers, including Chief Engineer Vincenzo Alfi, Staff Captain Alessandro Genzo and Hotel General Manager Richard Harry.

When Captain Arma is on leave, Captain John Smith will take over the navigation and leadership of Discovery Princess and serve together with Chief Engineer Tomislav Ljoka, Staff Captain Petar Lesic and Hotel General Manager Jasper Wolthuis.

“The entire Princess team, both ashore and at sea, would like to congratulate and recognize Captain Arma and Captain Smith on their notable and hard-earned appointments to lead our newest ship, Discovery Princess,” said Jan Swartz, Princess Cruises president. “Their meticulous focus to always look out for our guests is a testament to the level of service Princess is proud to deliver. The first Discovery Princess guests will have the pleasure of sailing with an esteemed inaugural leadership team, discovering and connecting to new destinations and cultures.”

Captain Gennaro Arma has always been passionate about the sea. He began his career with Princess Cruises in 1998 as a Cadet and moved up the ranks achieving his first command as Captain of Sea Princess in 2015, where he navigated the ship on two world cruises. He took the helm of Diamond Princess in 2018 and in 2020, led his team of “gladiators” through unchartered territory managing the COVID-19 virus onboard at the start of the global pandemic. As a result of his efforts, he was honored with the recognition of Commander of the Order of Merit of the Italian Republic, the highest of the orders of the Italian Republic, and selected among the 20 most influential Italian characters of the year by Vanity Fair in December 2020, Arma has also received the title of Magister of Amalfi Civilization for the Byzantine New Year, the Emanuela Loi award for courage, and the Assarmatori prize from the Italian maritime association awarded by the Minister of Transportation. He was born in Sorrento, Italy, where he lives with his wife Mariana and his son Diego.

Captain John Smith joined the Princess family in 2007 as a First Officer and quickly rose through the ranks into his current role as Captain, taking command of the Grand Princess in May of 2018 where he spent two years on board. He joined the Merchant Navy in 1983 as a deck boy, and gained his first certificate in 1988, rising to the rank of Captain on board tankers and ferries before joining Princess Cruises. As he made the transition from rating to officer, he received the ‘Watch Ashore’ award by the Marine Society and with this got his name on the famous plaque in London. Captain Smith is from Cheltenham in the UK and now spends his leisure time on the Costa del Sol, Spain.

Chief Engineer Vincenzo Alfi started as a 2nd Engineer Officer onboard Fair Princess in 1999. He was named Chief Engineer in 2011 on Ruby Princess and has since served on various ships including Crown Princess and Royal Princess. Born in Crotone, Italy, he graduated from the Italian Nautical Institute and had his first contract as an Engine Cadet in 1991, onboard a container ship.

Chief Engineer Tomislav Ljoka joined Princess in 2003 as 3rd Engineer Officer and reached his first contract as Chief Engineer in 2019, onboard Sea Princess. He’s served on various Princess vessels, including Crown Princess and Coral Princess. Born in Zadar, Croatia, he graduated from the Marine Engineering high school and sailed as Engine Cadet on bulk carriers. He then attended the University of Piran/Portorose University and graduated as Marine Engineer and completed a Cadetship on oil tankers.

Staff Captain Alessandro Genzo began his career at Princess in 2004, where he climbed the ranks to Staff Captain. Over his 17-year career with Princess, he’s served on a variety of vessels, including Royal Princess, Regal Princess and Enchanted Princess. At the age of 10, he watched “The Love Boat” with his grandmother and decided that one day he wanted to be a cruise ship Captain. Born in Trieste, Italy, he studied at the Nautical College, one of the oldest Nautical Schools in Europe. Then, he joined the Italian Navy, serving on a destroyer. Towards the end of his service, he was transferred to the Morosini Navy School in Venice as an instructor, before joining Princess.

Staff Captain Petar Lesic joined Princess in 2006 and achieved his current position as Staff Captain in 2018. He’s served on Diamond Princess in Japan, one of his favorite destinations. Born in Split, Croatia, he followed the seafaring tradition of his family and graduated from the Maritime University, before starting his career in the Merchant Navy in 2000.

Hotel General Manager Richard Harry joined Princess in 1988 as a front desk receptionist. Since then, he’s been on the newbuild teams for seven ships, including Sky Princess and Enchanted Princess. He was born in Farnborough, England and now resides in Bristol with his wife—whom he met on Golden Princess—and two children.

Hotel General Manager Jasper Wolthuishas served Princess Cruises since 2002, after seeing a Princess ship sailing by in Curacao and decided to pursue a career at sea. He joined as a Junior Assistant Purser and has enjoyed serving guests ever since. Wolthuis was born in Leiden, the Netherlands, and after receiving his degree in Hotel Management & Economics he moved to Curacao to work in the hospitality industry before joining Princess.

Discovery Princess cruises can be booked through a professional travel advisor, by calling 1-800-PRINCESS (1-800-774-6237), or by visiting the company’s website at www.princess.com.

What do you think of the news that Princess announces Senior Officers for Discovery Princess? Do you have plans to sail on this new ship when she debuts? Drop us an anchor below to share what you love about Princess Cruises.

Heidi is a physical therapist by profession, cruise enthusiast at heart, and Princess all the time! She is a self-confessed thrill seeker, obsessive planner, and over-packer. She is always looking for the latest and greatest adventures onboard and ashore, enjoys researching top things to do in ports of call, and loves dressing up for formal nights.
Heidi
Previous Post « Oceania Cruises Announces New 2022 Europe and Tahiti Cruises
Next Post Viking Resumes Operations in Malta »