If you want to visit Pearl Harbor when in Hawaii, an organized tour might be your best option. Here is our honest Pearl Harbor Tours Review. 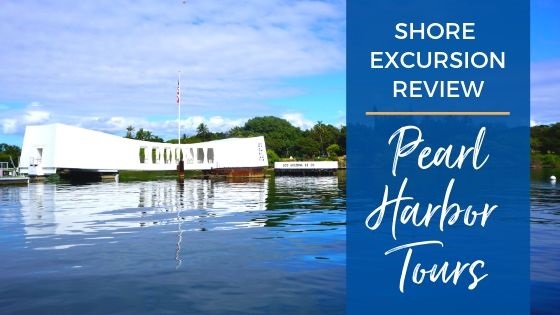 Among the places we wanted to visit during our pre-cruise days in Oahu, Hawaii was Pearl Harbor. Reviewing the different options, we opted to book a tour. Yes, you can rent a car or take an Uber, but we figured having a tour, which include some additional stops on the island, would be easier. We ended up booking the Arizona Memorial and USS Missouri Battleship combo tour offered through Pearl Harbor Tours. Was it worth the cost? Find out in our honest Pearl Harbor Tours review.

We booked our tour approximately four months in advance of our arrival in Hawaii. We received our confirmation of hotel pick-up and time, which we needed to change a few times, so we could be back for a scheduled evening luau.

All of the communications via email were quick and efficient. Our official meet-up was at 7:05 am about two blocks from our hotel, the Alohilani Resort on Waikki Beach. Up early, we made sure to be at the meeting spot a few minutes in advance as our experience with other tours this trip indicated that the buses arrive early and don’t wait. 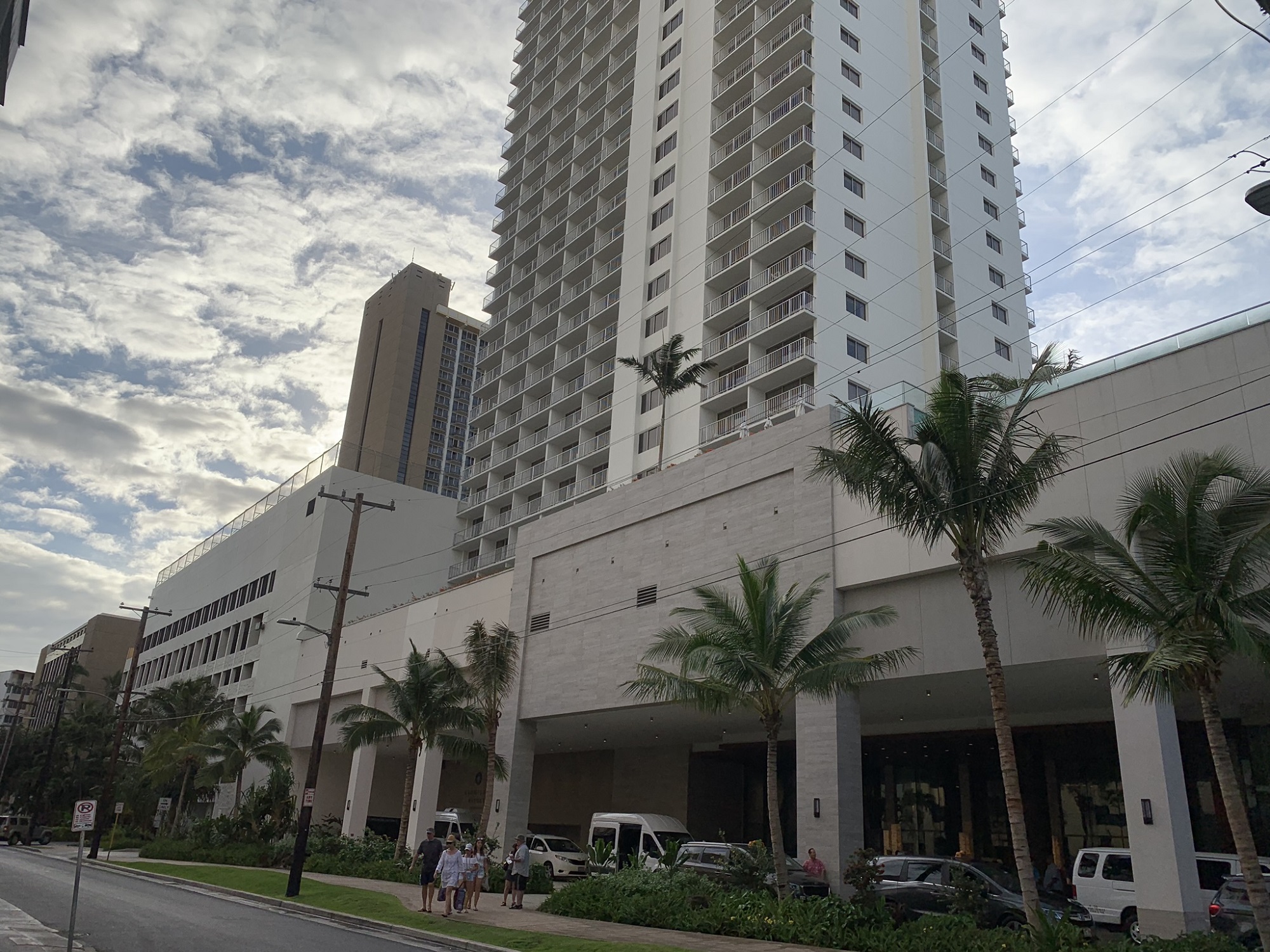 Sure enough, right before 7 am, a small van came to pick us up with one couple already onboard. On the company’s website, it indicates that all tours are 12 people or less. We proceeded to stop at one more hotel and then the airport. So, we ended up being a total of only 8 people for the entire day. George, our driver, was a native Hawaiian, though not your stereotypical native at all.

On Our Way to Pearl Harbor

We arrived at the grounds of Pearl Harbor just before 8 am, when the memorial opens. We were instructed that bags were not allowed into the military area, except clear bags, so that we would need to leave them on the bus.

The website indicated that this tour included all tickets and a guided tour. What we didn’t know is that the National Park Service does not allow tour companies to give tours on the premises. In fact, drivers and tour operators are restricted to staying near the visitor center. So, our tour actually included an audio narration with headset. 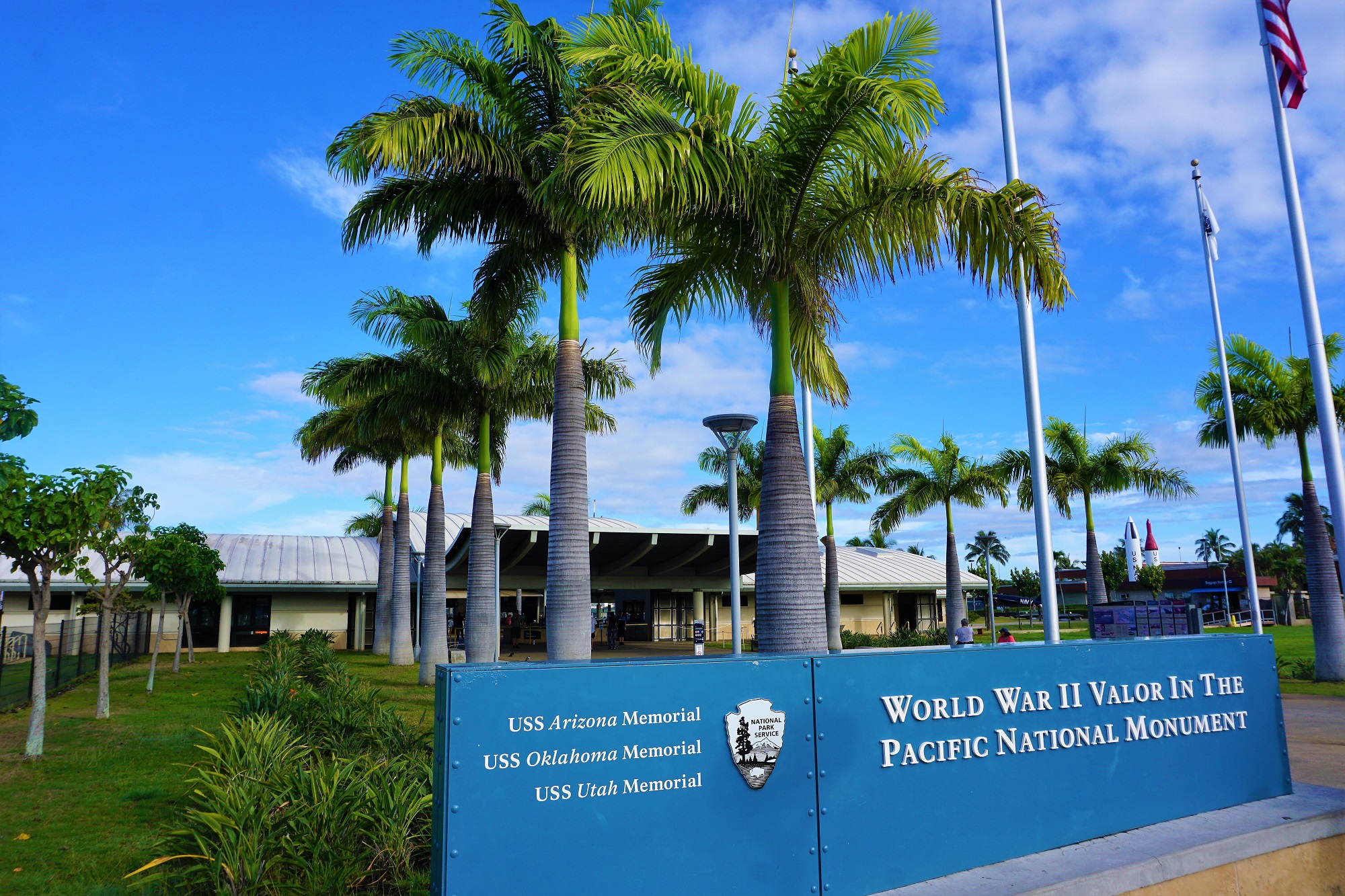 Our tickets included the free program, which is a 23-minute movie at the Memorial Theater and a boat ride to the Arizona Memorial. Our movie was the second showing of the day at 8:30 am. Upon arrival, we used the facilities and then queued up for the film. It is a very well done overview of the day’s events, the lead up, and aftermath. It definitely set the stage for a very emotional morning. Once the movie was over, we boarded a Navy-operated boat to ferry us out to the Arizona Memorial. 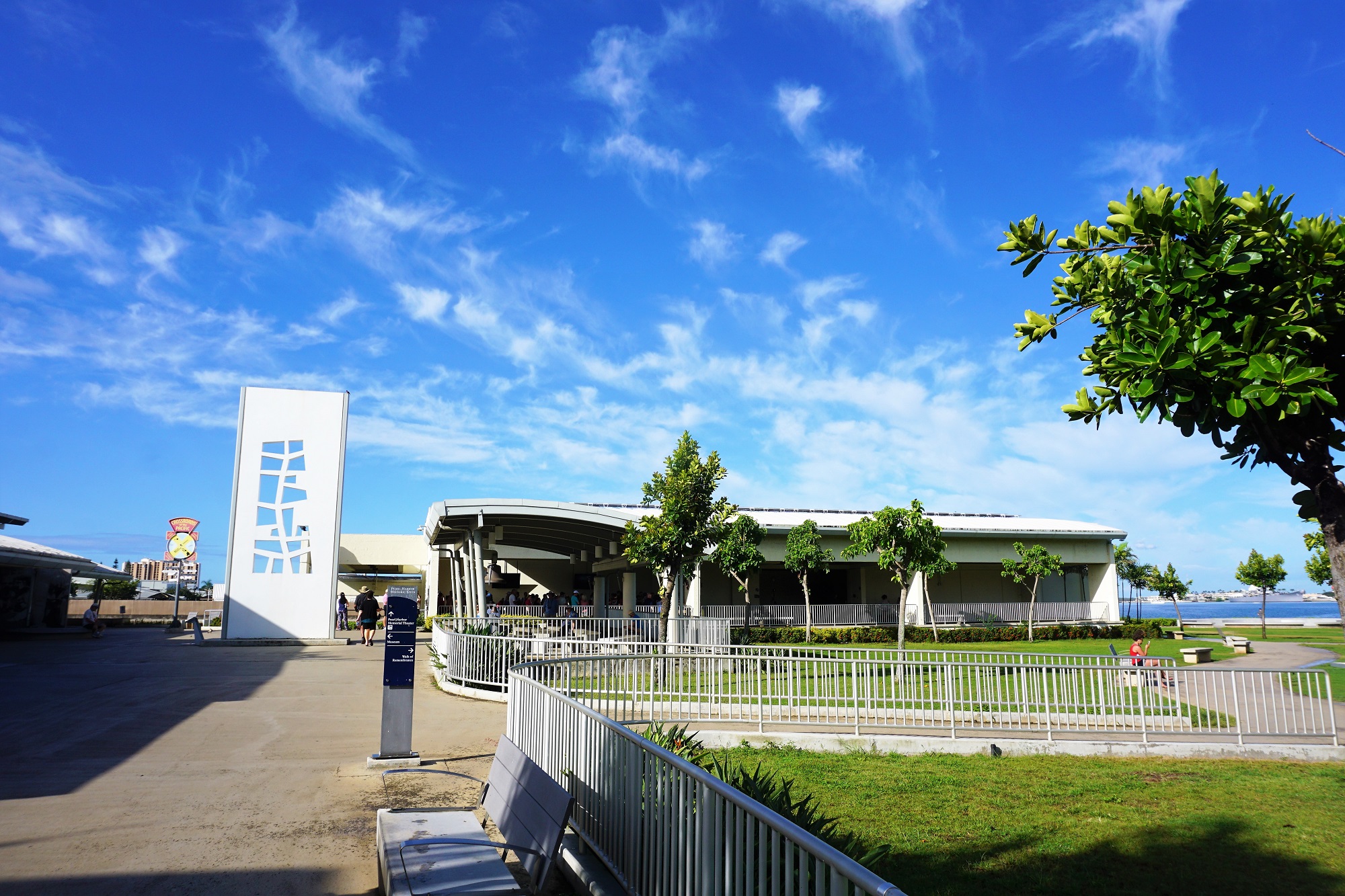 With the dock damaged, the Arizona Memorial was still closed at the time of our visit, so we did not have a chance to disembark. Rather, we completed a small circle around Battleship Row, as a volunteer provided more details about the ships and the crew that were lost on the vessels. It was very moving to hear about the experiences of those who lost their lives during the attack, as well as those who survived and have come back to Pearl Harbor for their final resting place.

Of note, the USS Arizona Memorial did re-open as of September 1, 2019.

Back at the park, we had about 45 minutes to tour the grounds, as well as the two gallery exhibits, on our own. We walked through these museums at a fast clip and were only able to listen to a few of the 20+ audio clips at the different interpretive displays throughout the memorial. This is certainly not enough time to view the grounds. 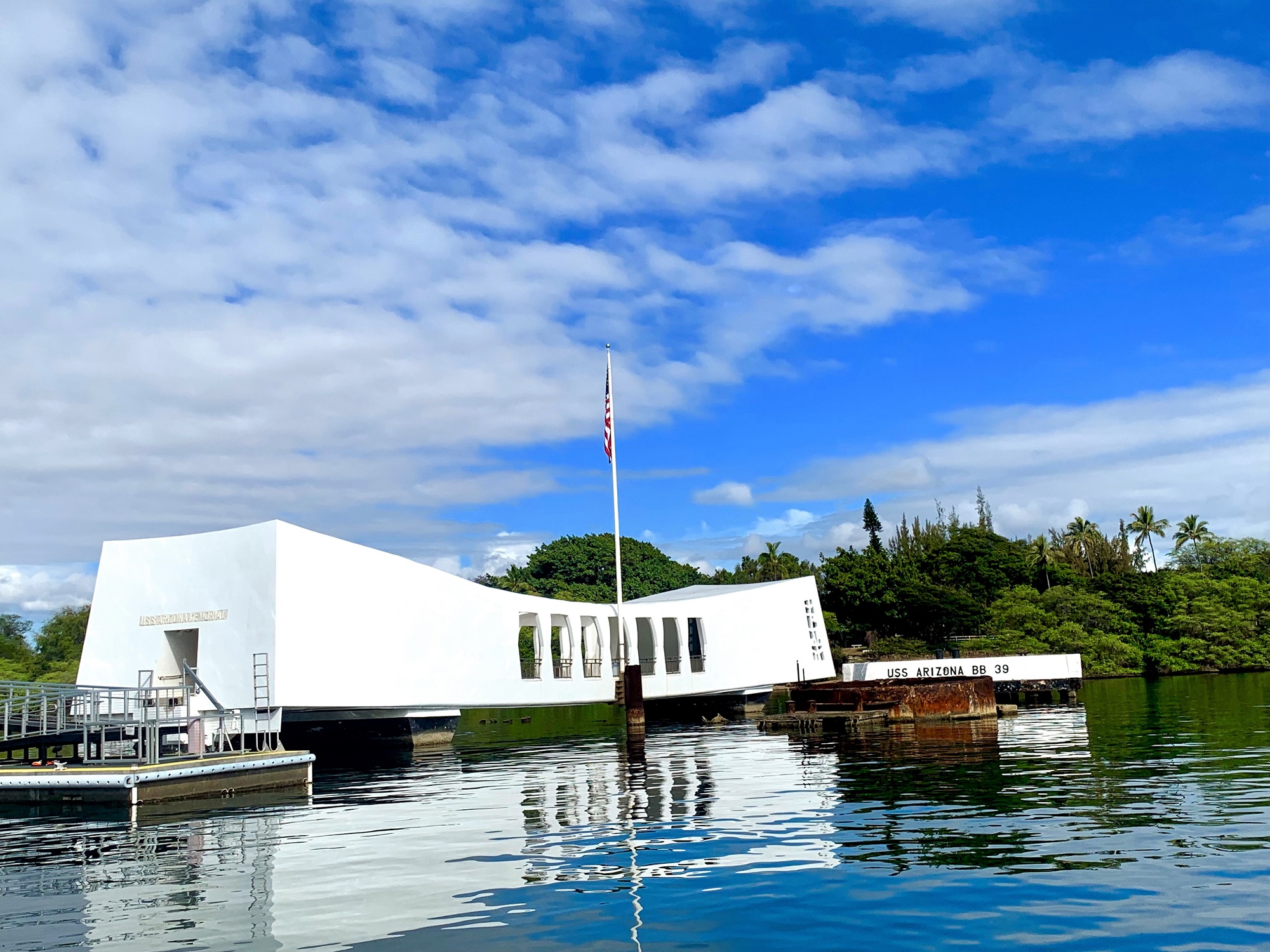 Additional up-charge experiences at the memorial include the USS Bowfin Submarine Museum and Park, the USS Missouri Battleship, and the Pearl Harbor Aviation Museum. For individuals looking to make a full day of the tour, you can purchase Passport Books, which cover admission to all of these additional sites. Bus transportation to nearby Ford Island, where the USS Missouri and the Aviation Museum are located, is included.

On to the USS Missouri

For the next part of our Pearl Harbor Tours review, we headed to Ford Island to tour the USS Missouri. Again, our guide George joined us on the shuttle to the battleship but did not accompany us on the ship tour. With admission, guests receive a complimentary tour of the main deck of the battleship. We were lucky enough to board the ship just in time for the 10:15 am tour.

The tour lasted about 30 minutes, starting at the bow of the ship with its impressive artillery and canons. A good portion of the tour took place at the exact location where the Japanese surrendered to General MacArthur, officially ending World War II. Hearing the volunteer tour guide describe the day’s events, and to be standing in the exact location where history occurred,  gave me goose bumps. 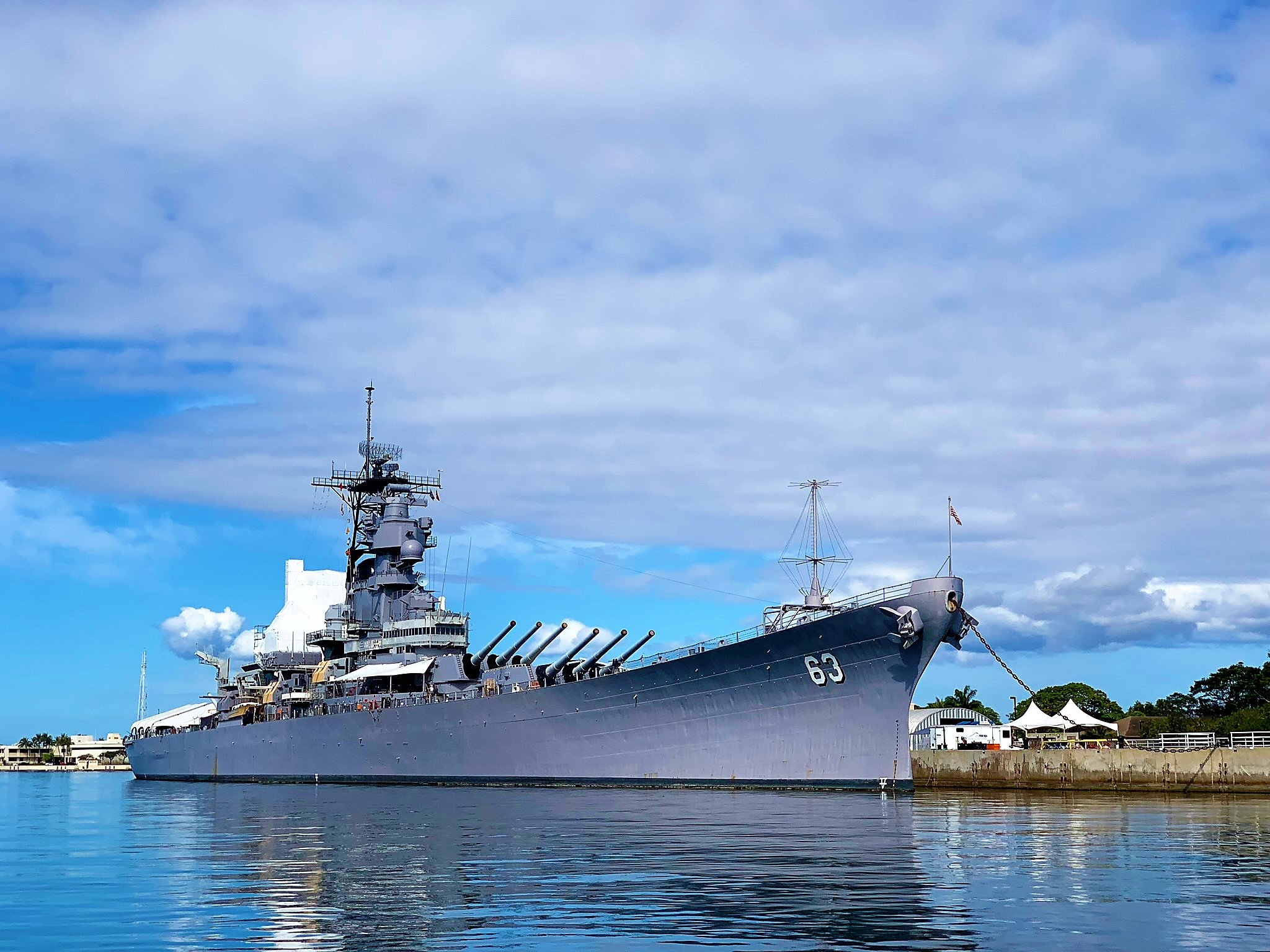 The tour ends at the aft, where you hear the fascinating story of a Japanese Kamikaze pilot that crashed into the USS Missouri. An endearing story of war, honor, and respect, it was a fitting way to end the official tour.

We spent another 90 minutes or so touring the remaining open areas on our own. One fascinating area was the command room. Here, there were different controls for the weapon systems. This battleship was actually in commission until the early 1990’s, so the technology was from that time period, including missile controls, radar, and such.

Inside the battleship, you can also tour the crew quarters, which includes plenty of exhibits and informative placards. We leisurely strolled these areas, but I would be lying if I said we read many of the different descriptions. 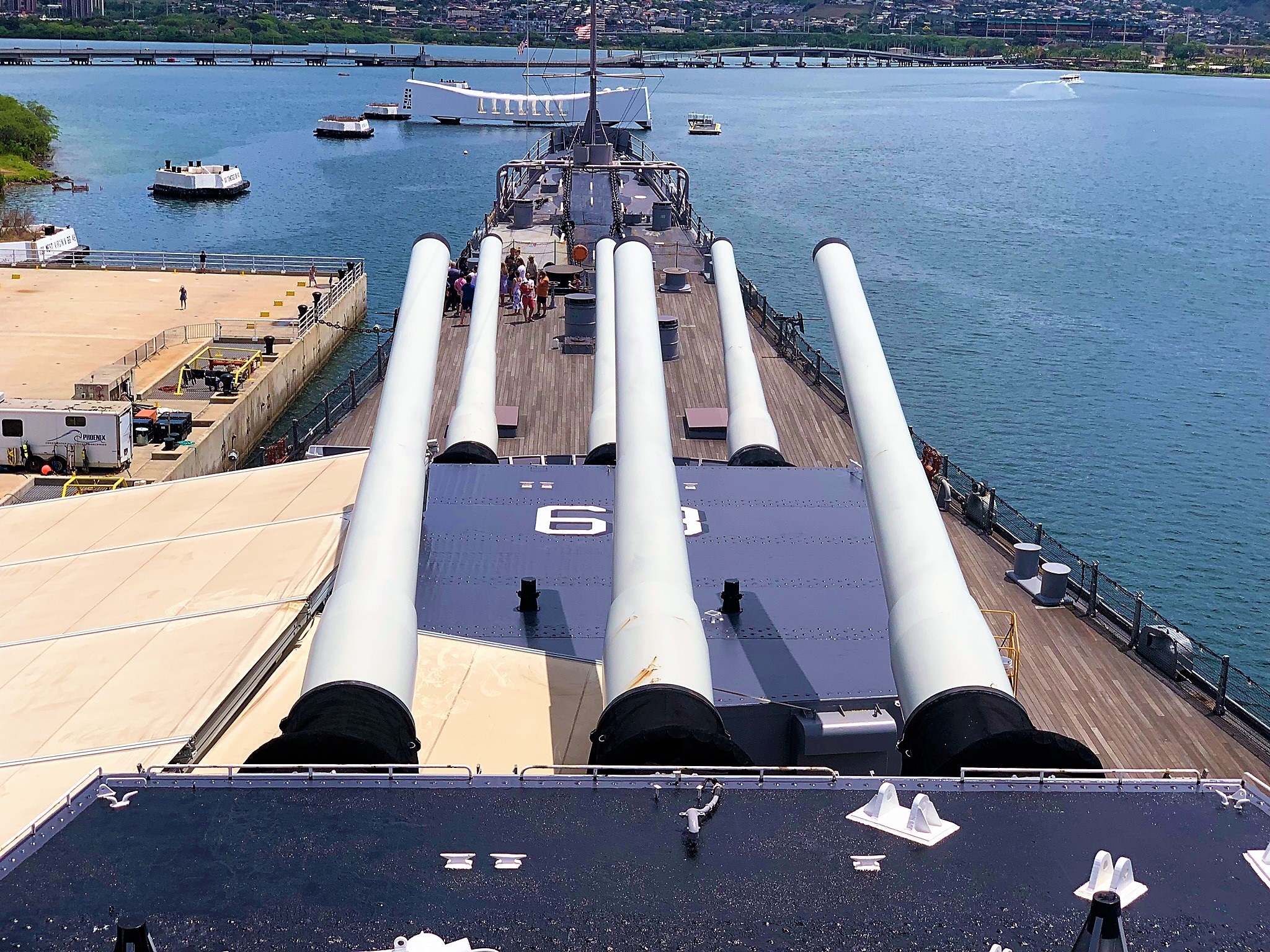 Our meeting time was 12:20 pm, so we made sure to give ourselves enough time to browse the gift shop and use the restroom at the end of our self-guided adventure. George had grabbed our van in the meantime, so we met him in the parking lot. Our half-day at Pearl Harbor was over. Certainly, we left feeling a bit more humbled!

Departing from Ford Island, we headed toward the Punch Bowl Cemetery. During our approximately 30 minute drive, George told us more about his up-bringing on the island and his family, including personal stories of his grandfather who had ties to Pearl Harbor. This memorial cemetery is home to over 50,000 service men and women and their dependents who gave their lives in wars, including World War I and II. It is an impressive area, set inside a volcano crater. 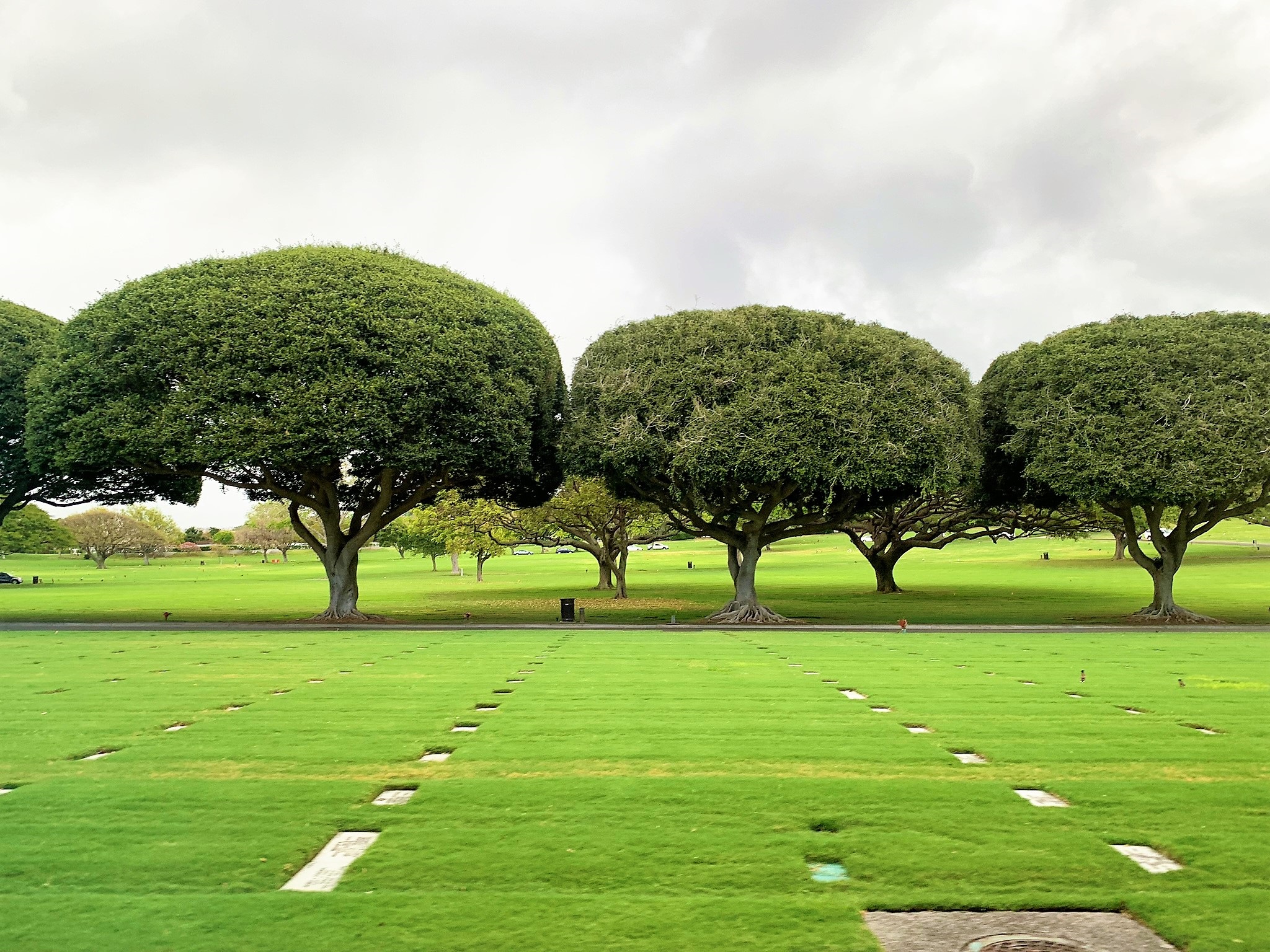 Our van drove slowly around the main area then headed back towards the city. This tour also included a stop at the Iolani Palace and the statue of King Kamehameha across the street. 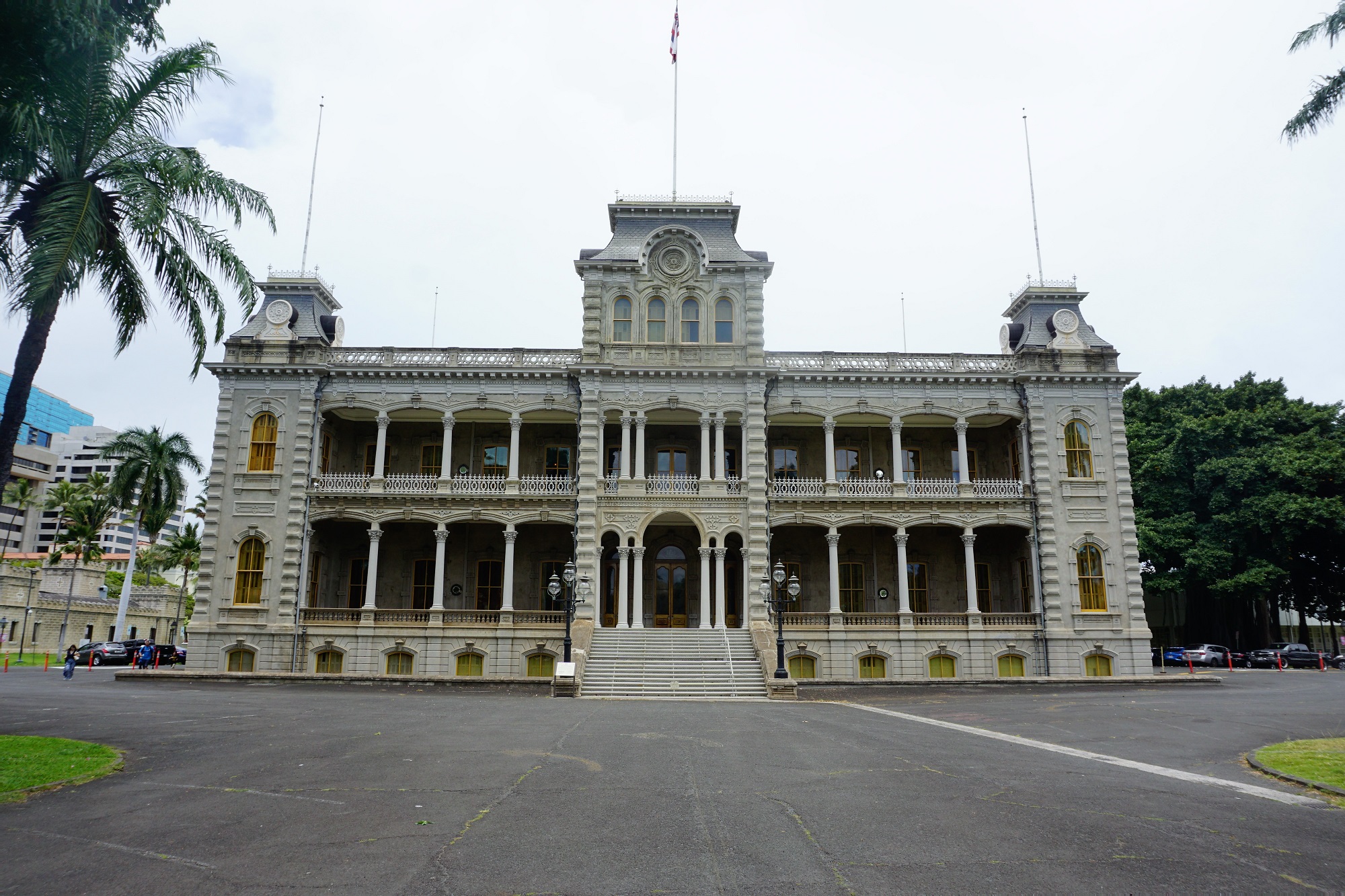 Here, we had time to stroll the grounds and take some pictures. The Palace is the home to the island’s last Monarch and is now open for tours. Approximately 60 to 90 minutes are recommended to tour the inside of the palace.

In culmination, we started the hotel-drop offs. Luckily, the traffic was not too bad, so we were back to our original meeting spot within 15 minutes. Then, it was back to the room for a quick shower and costume change before our next tour, a Polynesian luau!

Overall, our half-day tour with Pearl Harbor Tours was informative, moving, and well-executed. Our driver was friendly, professional, and offered a very personal perspective during the tour, reliving his time growing up on the island. We would have liked more time at the Memorial to review the outdoor exhibits, as well as the additional museums that were not included in this tour. 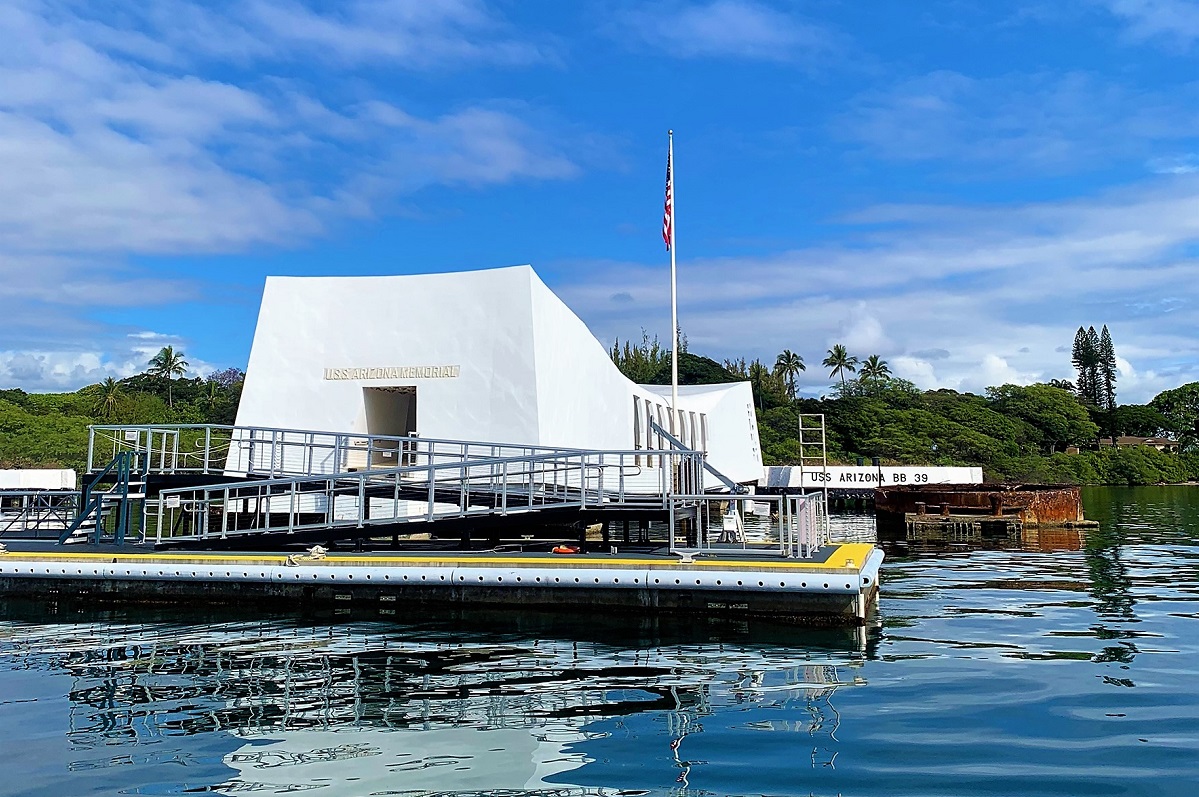 For real history buffs, you should plan for a full day at Pearl Harbor. We would strongly recommend getting to the site as early as possible to get tickets with few lines. You can pre-reserve tickets online, but the earliest in the day that you can reserve them is 11 am, while the memorial doors open at 8 am.

If you prefer checking the big items off the list in an organized fashion, this tour certainly covers all of the major highlights. The company also has various pick-up points throughout the island. They even offer tours including transportation from some of the neighboring islands.

Overall, we were happy with what we were able to accomplish on this half-day tour with a reputable company and superb tour guide!

Have you visited Oahu, Hawaii? Do you have a review of Pearl Harbor Tours? Drop us an anchor below with your feedback on this popular shore excursion. 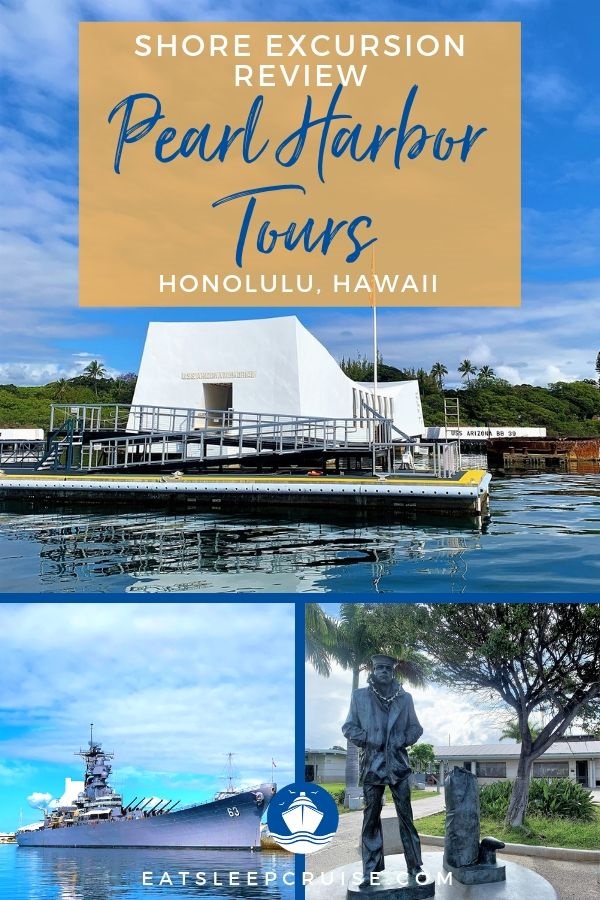 Don Bucolo, or “DB”, loves everything about cruising- the ocean, the food, and the atmosphere. While he may be obsessed with doing extensive amounts of research on ships and all elements of a cruise, Don enjoys sharing his new found knowledge with fellow cruisers. When he is not sailing the high seas, he does whatever his wife tells him to do-it only took 10 years to realize this.
Don
Previous Post « Top Things to Do in Oahu, Hawaii on a Cruise
Next Post All the New Details on Odyssey of the Seas »