We have been sailing on Royal Caribbean for over 10 years now and have never dined at Johnny Rockets for lunch or dinner. Well, we decided to put an end to that on our latest

We had decided ahead of time that we would give this up-charge restaurant a test run on embarkation day of our Majesty of the Seas cruise. Upon boarding the ship, we received a coupon for a 20% discount, which was technically good for all port days of the cruise. On the three day cruise, this discount would have been valid any day of the cruise since there were no sea days. After completing our customary photo tour of the ship, we were ready to try out the restaurant for lunch around 12:30pm. 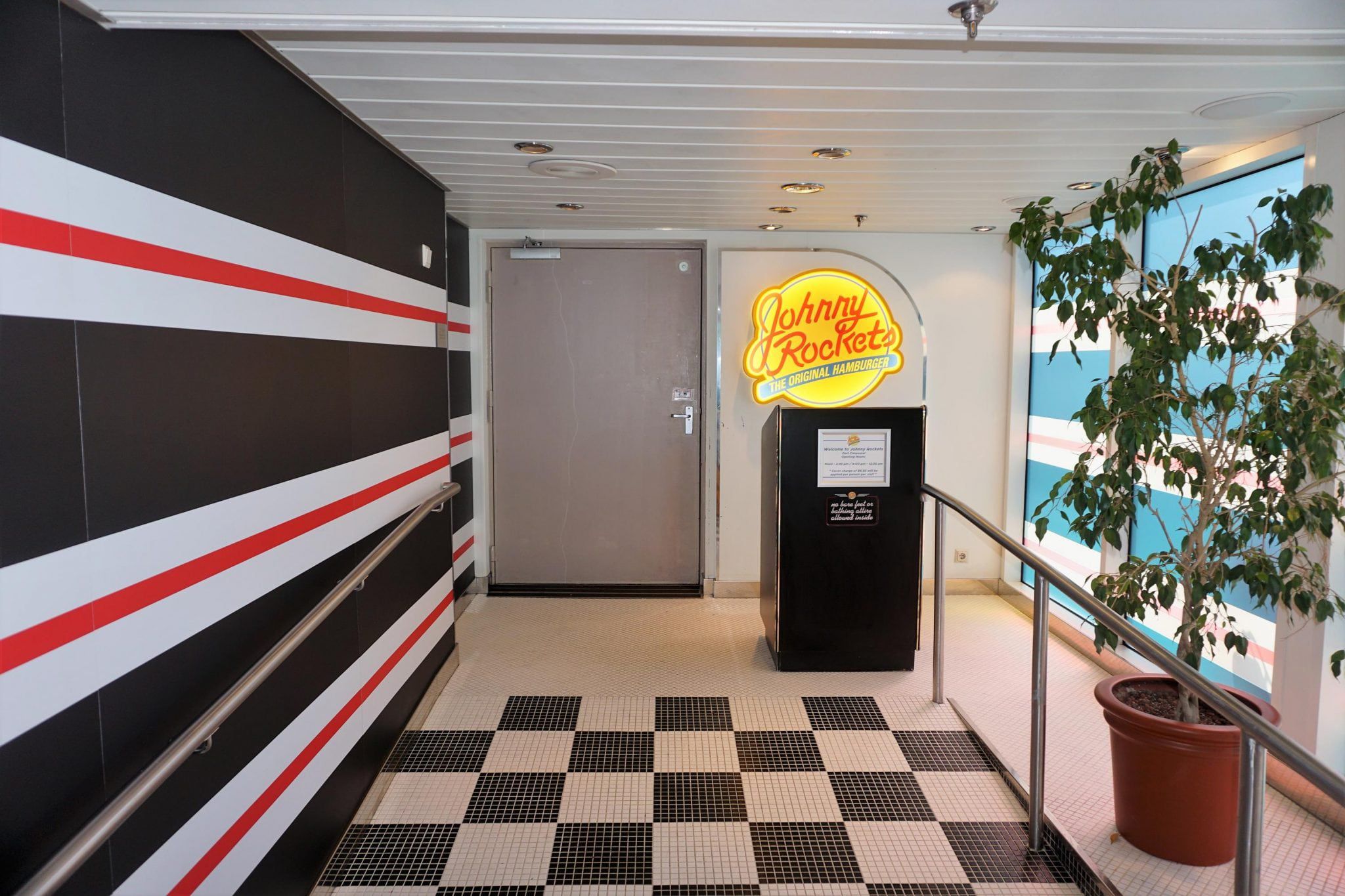 Entrance to Johnny Rockets on Majesty of the Seas

The venue was relatively empty, with only a few tables occupied by fellow cruisers. We were greeted rather quickly by a friendly waiter who instructed us to sit at any available booth. Once we were all settled, our waiter came by with menus and described the the different offerings and additional charges. For the cover charge of $6.95 a person, the menu was all you could eat EXCEPT milkshakes, which cost approximately $6 more. 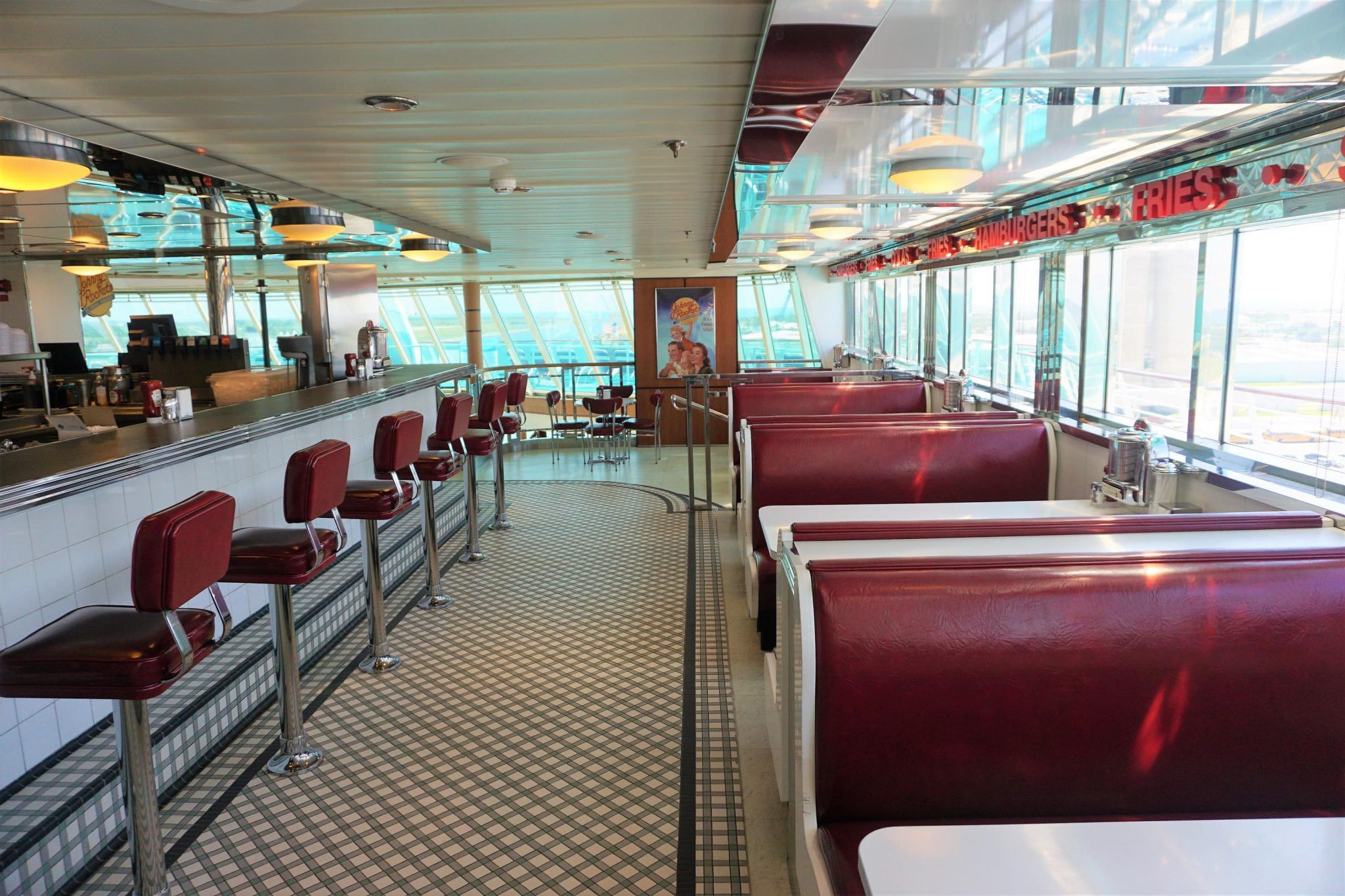 Inside Johnny Rockets on Majesty of the Seas

Taking our drink order first, we had a few minutes to review the menu before our waiter returned. With our order then placed, we had a plate of fresh and very hot French fries and onion rings delivered to our table just moments after ordering. Both of these tasty offerings were a step above similar options from the buffet. 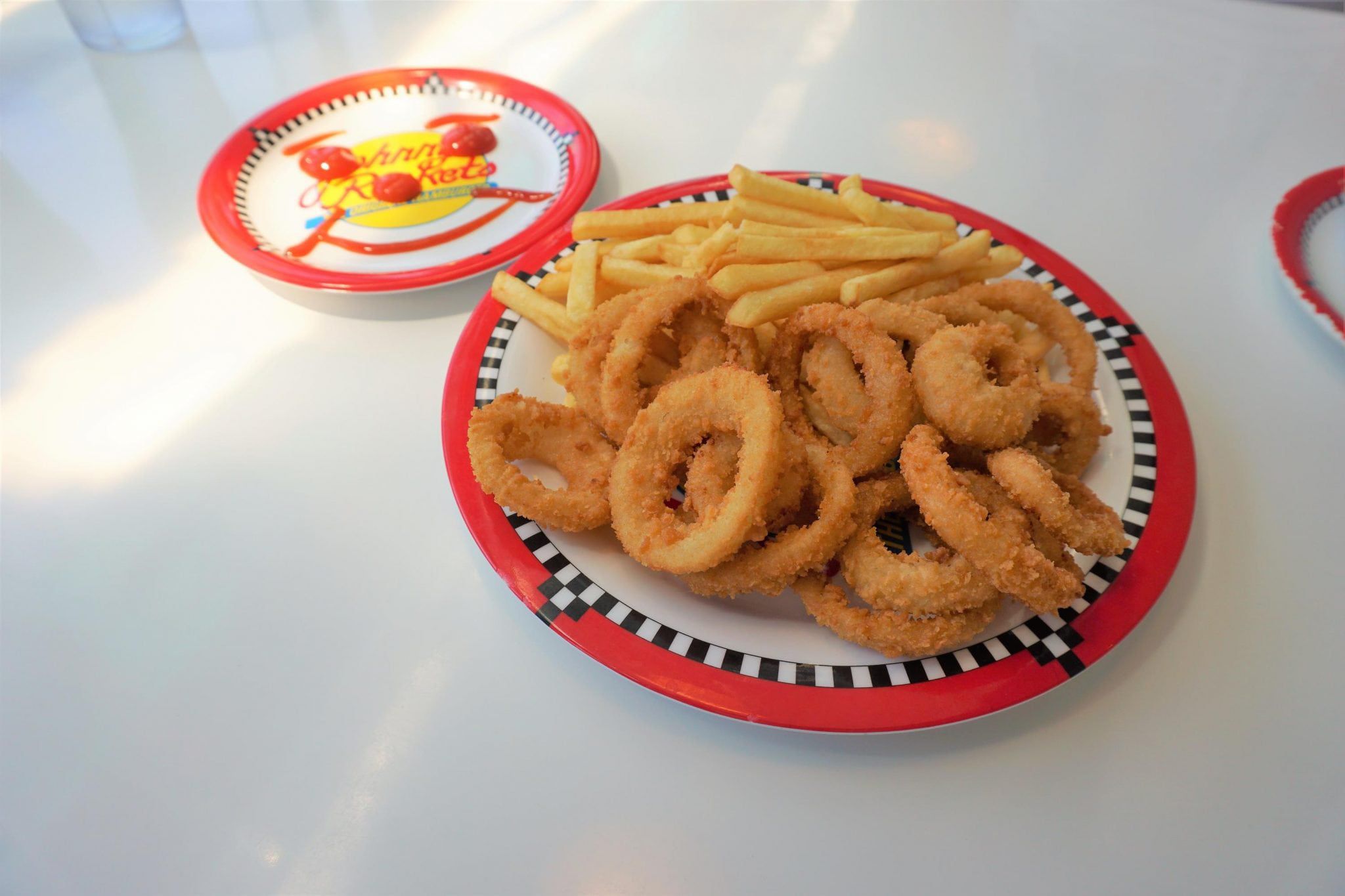 Half and Half at Johnny Rockets

The Princess went beyond her basic grilled chicken and ordered the BBQ Chicken Bacon Melt for her meal. How can you go wrong with a tangy barbecue sauce and crispy bacon? Yes, it was quite good but messy. For once, she need more napkins than I did during a meal! 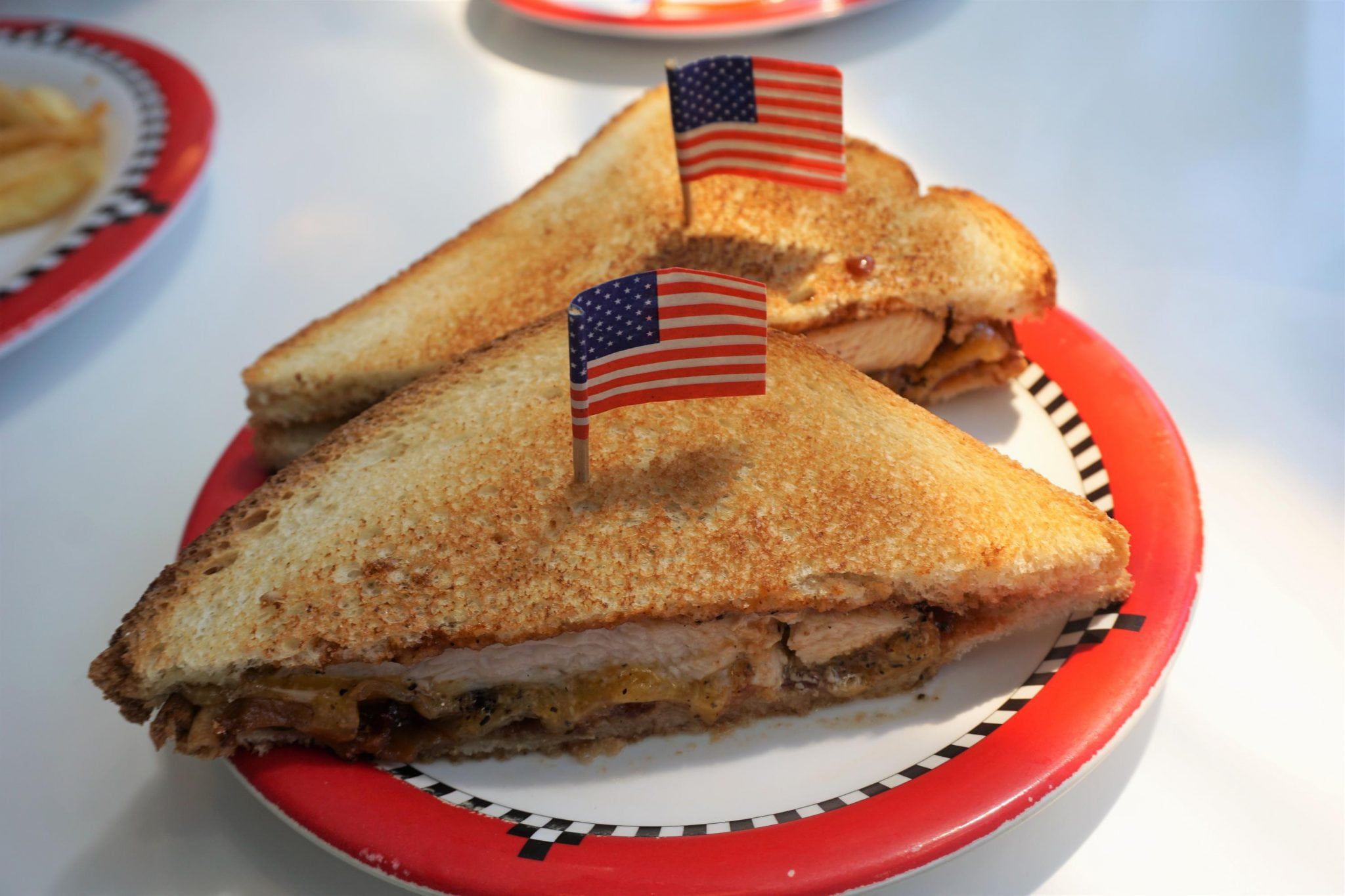 I debated back and forth what I should order but finally settled on the Route 66. Freshly made with a nice mixture of mushrooms and onions, it was definitely one of the best burgers that I have had at sea. Not to mention, the food literally came right off the grill. So, it was hot and custom made to our specifications. 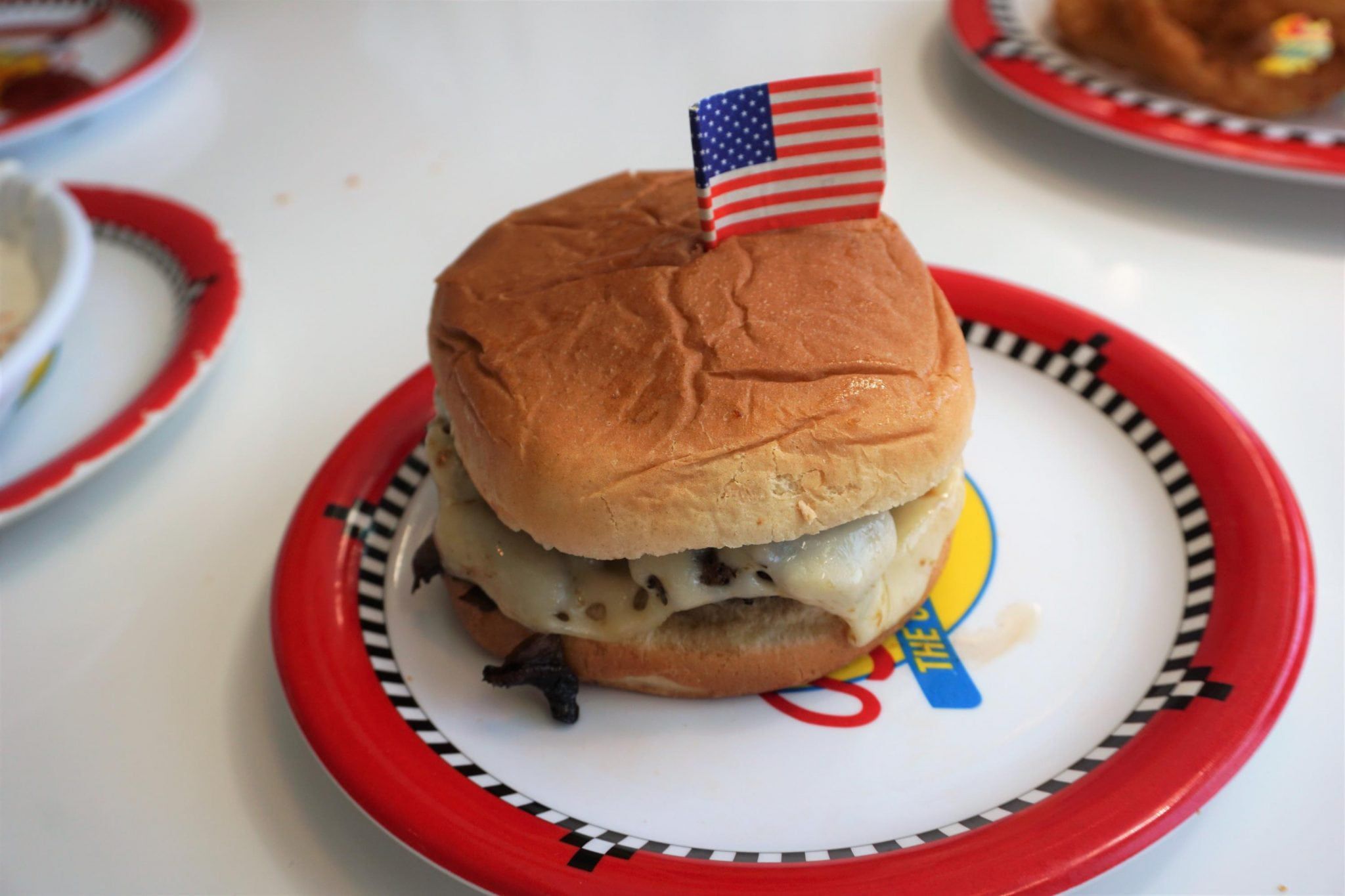 Not that we really needed to get dessert, but the Apple Pie a la Mode was speaking to us. Somehow, we found room to split a piece. The pie had a mildly sweet yet tart filling and a light flaky crust. It was definitely worth the extra calories. 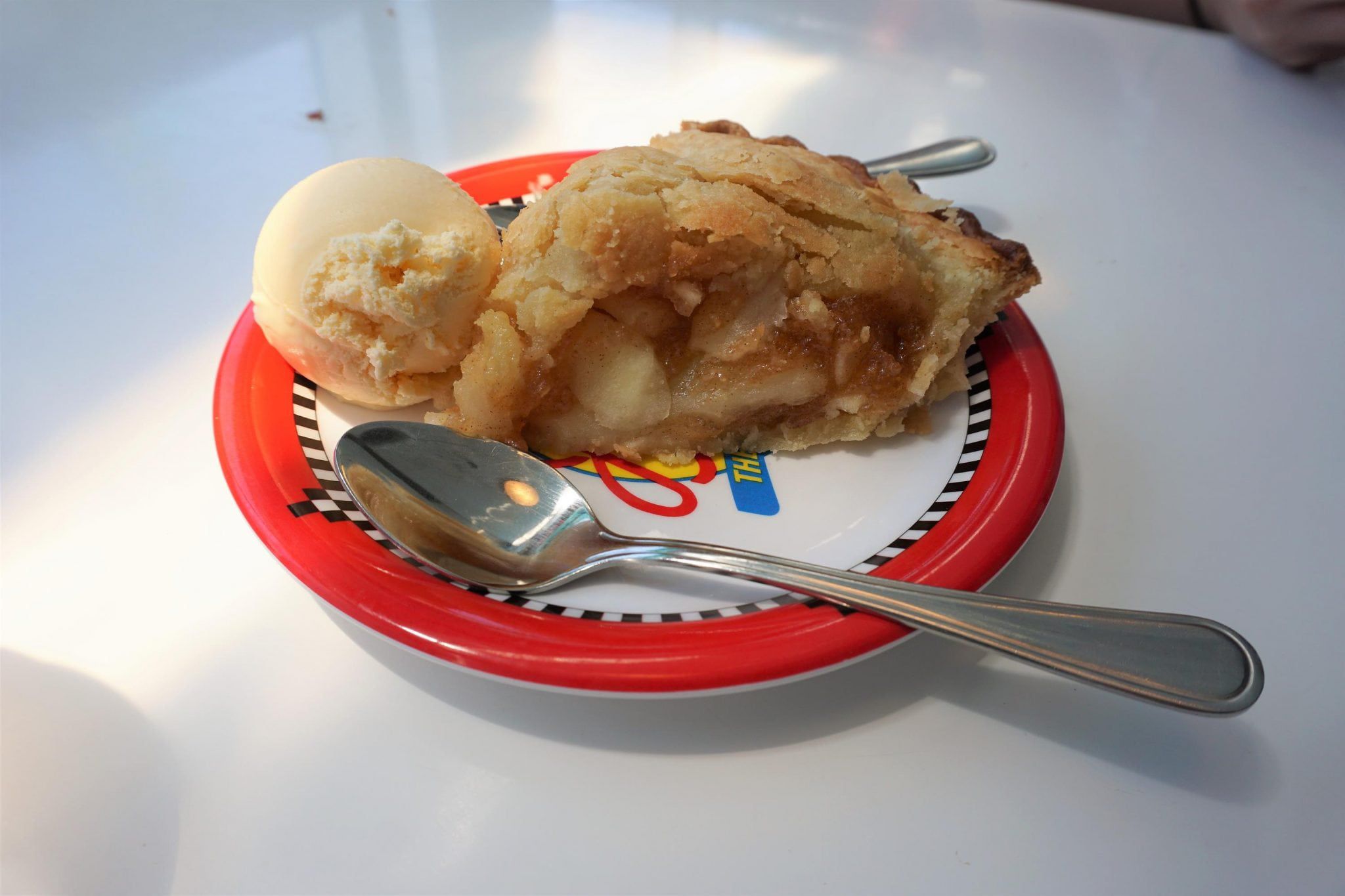 Apple Pie at Johnny Rockets on Majesty of the Seas

Overall, Johnny Rockets on Majesty of the Seas was a nice departure from the typical lunch scene on embarkation day. We would definitely return to this up-charge restaurant for lunch or a casual dinner in the future. We were pleasantly surprised on the overall quality of the food, as it was freshly made, well seasoned, and served hot and fresh out the kitchen. Our waiter was also very attentive during the meal. The quiet restaurant served as the perfect alternative to the often congested Windjammer Cafe.

Have you dined at Johnny Rockets on Majesty of the Seas or any other Royal Caribbean ship? What is your favorite casual cruise ship restaurant? Drop us an anchor below to share your restaurant reviews with fellow cruisers. 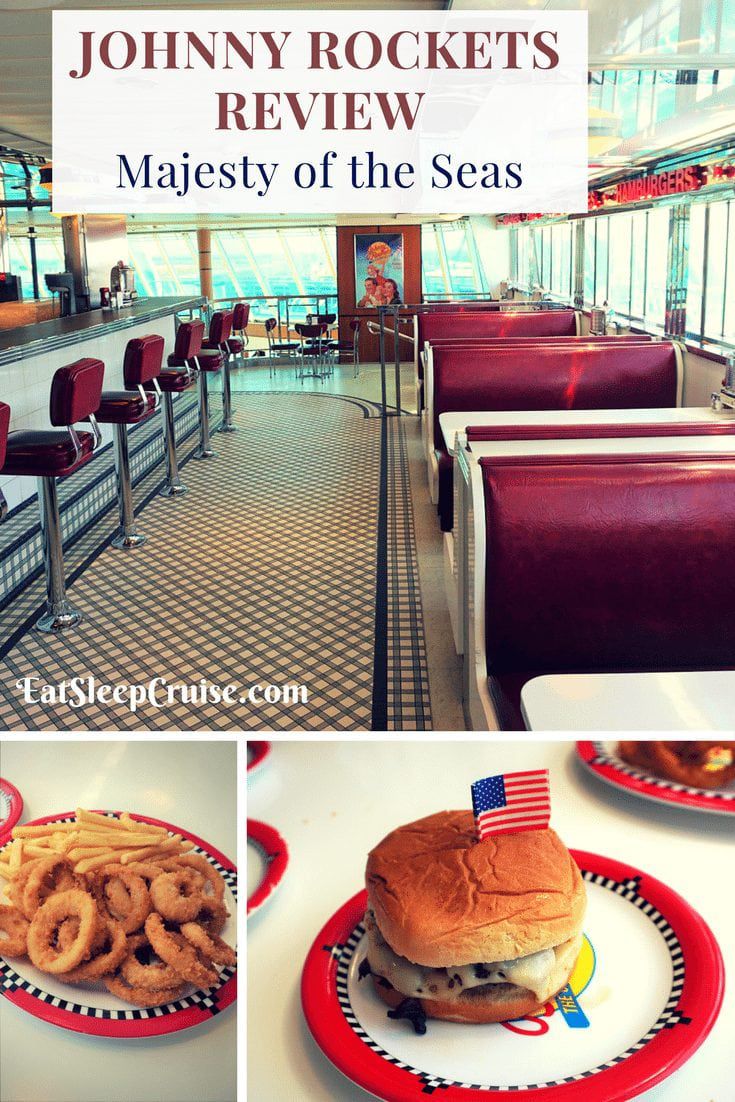 Don Bucolo, or “DB”, loves everything about cruising- the ocean, the food, and the atmosphere. While he may be obsessed with doing extensive amounts of research on ships and all elements of a cruise, Don enjoys sharing his new found knowledge with fellow cruisers. When he is not sailing the high seas, he does whatever his wife tells him to do-it only took 10 years to realize this.
Don
Previous Post « Top 5 Reasons to Visit the Southern Caribbean Now
Next Post Cruise News November 5, 2017 »

4 comments on Johnny Rockets Majesty of the Seas Review