Thanksgiving is right around the corner, but the cruise lines were busy with some new reveals and announcements this week. As you begin your travels for the holiday, you can unwind with our latest Cruise 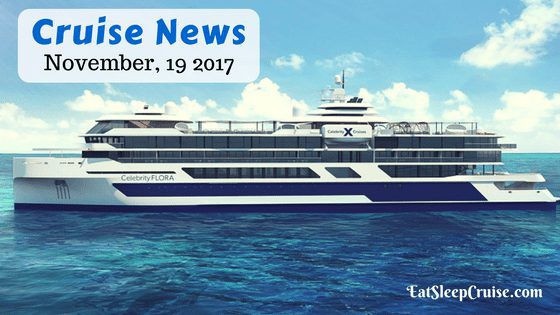 Thanksgiving is right around the corner, but the cruise lines were still busy with some new reveals and announcements this past week. As you begin your preparations for the holiday, you can unwind with our latest Cruise News November 19, 2017.

Celebrity Flora to Revolutionize Travel to the Galapagos

In an unprecedented move, Celebrity Cruises is betting big on the Galapagos. With the addition of several expedition ships recently, it was a welcomed surprise when the cruise line announced a brand new build heading to the region. The new Celebrity Flora will be a 100 passenger, all suite ship that is environmental friendly. This lavish ship will offer cruisers the opportunity to explore more of these well known islands. The ship will be custom designed for traversing the area in style, borrowing many elements from the upcoming Celebrity Edge. In addition, the ship will boast one naturalist to every 12 passengers giving cruisers more opportunity to learn about the wildlife and the region. With onboard lounges and dining venues that provide panoramic views, a spa, and Celebrity’s signature service, the ship is sure to be popular with expedition travelers. Learn more about the ship in the video below.

There will be another new ship sailing the U.S waterways in 2018. American Cruise Line revealed its newest ship, the American Song, this week. This new river boat is slated to be the first ship in a new class for the company. The Modern Riverboat Series will abandon the paddlewheel design for a sleeker, more contemporary look. When the American Song debuts in the fall of next year, the company contends that she will be among the fastest and quietest ships sailing the rivers of the U.S. A large open atrium offering stunning views and an open sports deck featuring lawn sports will give cruisers more access to the sights as they sail along the rivers. The ship will debut on the Mississippi River next fall and then reposition to the West Coast in 2019. 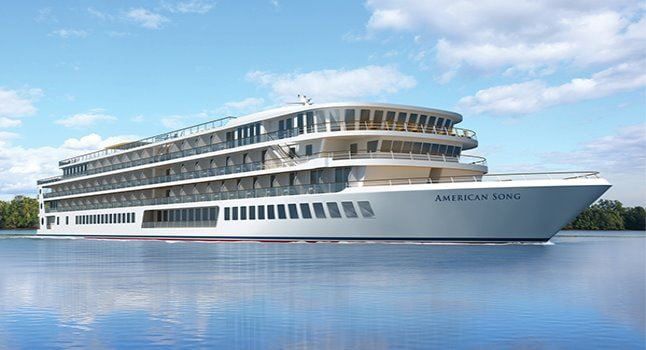 If you can’t get enough of the new Virgin Voyages, you are in luck. The company released a series of new artist renderings this past week. We still do not have any details of what will be inside the ship, but these new shots give cruisers a closer look at the ship’s exterior features. With a sleek bow and a stern showcasing an apparent open air promenade deck, the ship bears a striking resemblance to more recent designs coming to MSC Cruises and Celebrity Cruises. What do you think of these new images? Let us know in the Comments section below. 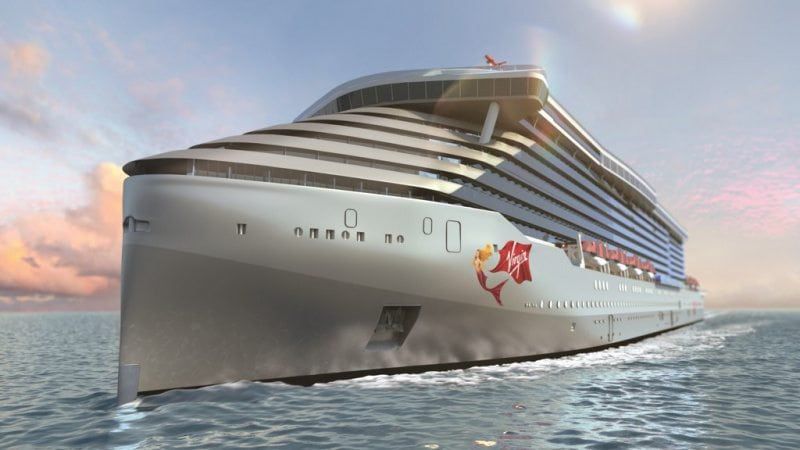 Norwegian Cruise Line has decided to change the terms of cruise bookings. Starting next month, cruisers in all staterooms will have to make their final payments 120 days before sailing. This new policy is an increase of 30 days. Many of Norwegian Cruise Line’s competitors require payments be made 75 days before sailing. This new restrictive policy is touted as a way of ensuring that cruisers who book early will receive the best pricing. It is unclear what impact this new policy will have on cruisers’ willingness to book cruises with the company. We will also have to wait and see how this new policy will affect promotions and pricing on the line’s cruises for next year.

MSC Cruises made it a double feature a few days ago. At the STX France shipyard, the cruise line marked two major milestones for two of its newest ships. Cruise officials were on hand to perform the steel cutting ceremony for the line’s next class of ship. This Meraviglia-Plus class ship will be the line’s largest vessel to date. Officials also marked the occasion by announcing the name of the ship, the MSC Grandiosa. We feel the name suits this new ship quite well. The MSC Grandiosa will be hitting the waters in November of 2019. Also coming to a cruise port near you in the spring of 2019 is the MSC Bellissima. This week, MSC Cruises conducted the traditional coin ceremony which begins the official construction of the ship. 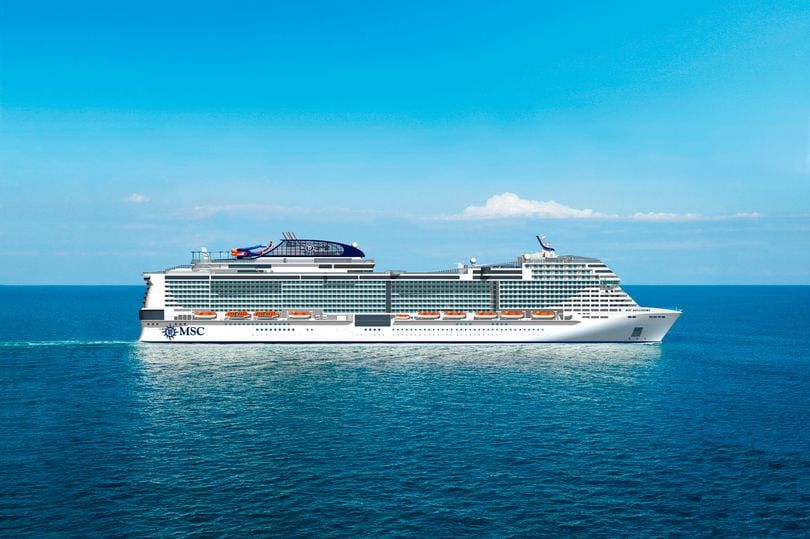 There will be even more magic in store for cruisers onboard the Disney Magic. The cruise line provided details of an upcoming dry dock in early 2018. Along with improvements to the onboard spa and the addition of new features and decor in the adults-only Cove Cafe, the ship is getting a brand new dining concept. A new Tangled themed restaurant will be added to the ship. This new immersive dining experience will be replacing the Carioca’s restaurant which was added to the ship in 2013. This new restaurant will fit right in on the ship which also hosts “Tangled the Musical” in the main theater. Rapunzel’s Royal Table will feature food and entertainment themed around the movie’s fictional island of Corona. Guests will also have the chance to interact with characters from the movie during the dining experience. Updates are expected to be done by early March of next year. Once completed, the Disney Magic will continue to offer short Bahamas cruises from Miami, FL.

In even more new cruise ship news, Regent Seven Seas revealed the name of its newest ship. Setting sail in the first quarter of 2020, the new Seven Seas Splendor will be the line’s fifth vessel. The name was selected as part of a contest that the cruise line initiated in September. According to reports, Regent received over 14,000 submissions. The cruise line still has not released the names of the winners of the ship naming contest. Selected winners will be given a free cruise on the ship.

Lastly, Carnival Cruise Line released details for plans to increase its capacity to offer short cruises from the Gulf region. Starting in 2019, the cruise line will reposition ships to both New Orleans and Galveston to increase the line’s ability to offer four and five day cruises to Mexico. The Carnival Dream will become the largest and newest Carnival ship sailing from Galveston, Texas. Also in 2019, the Carnival Valor will be repositioned to New Orleans to become the largest ship in that home port. Both ships will be stopping at ports including Cozumel, as well as stops in Costa Maya or Progreso.

Did we miss any major updates in this latest edition of Cruise News November 19, 2017? Drop us an anchor below with your top cruise stories from the past week. 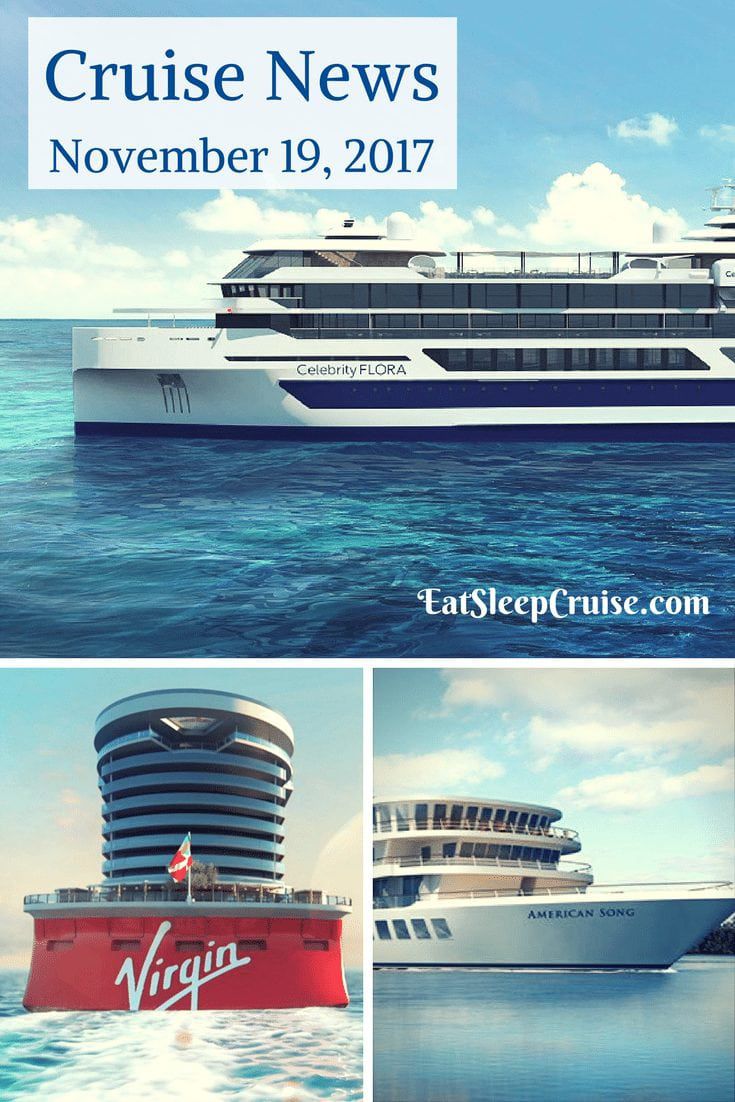 Don Bucolo, or “DB”, loves everything about cruising- the ocean, the food, and the atmosphere. While he may be obsessed with doing extensive amounts of research on ships and all elements of a cruise, Don enjoys sharing his new found knowledge with fellow cruisers. When he is not sailing the high seas, he does whatever his wife tells him to do-it only took 10 years to realize this.
Don
Previous Post « 10 Foods You Must Try on Harmony of the Seas
Next Post Cruisers Give Thanks 2017 »