Explore the entire Big Island of Hawaii from the air. See why this is one of the most popular tours with our Blue Hawaiian Big Island Spectacular Review. 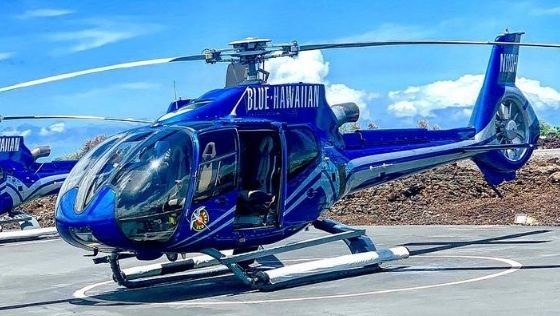 Hawaii is one of the most popular vacation destinations. These islands offer amazing beaches, unique flora and fauna, and of course, volcanoes. While visiting the Big Island on a cruise, one of the best ways to see everything is from the air. That is why on our Celebrity Solstice Hawaiian cruise, we ventured off to explore as much as possible with a helicopter tour. See why you should too with our Blue Hawaiian Big Island Spectacular tour review.

While we cruise to the Bahamas and Caribbean often, we wanted to do something special to celebrate our 10 year wedding anniversary.

So, when we spotted a great deal on a repositioning cruise stopping in Hawaii, we didn’t hesitate to book it. This sailing on Celebrity Solstice originated in Oahu, and had two stops on the Big Island, as well as two days in Maui.

Booking 8 months in advance, we had plenty of time to review all of the different shore excursion options. At the top of our list was a helicopter tour over the volcanoes. One of our most memorable excursions to date was our helicopter tour and glacier walk at the Mendenhall Glacier in Juneau on an Alaskan cruise.

We decided that our day at Kailua-Kona was ideal for such a tour. As we were visiting on a cruise, most tour companies indicated that we had to book directly with the cruise line. That didn’t really matter, as the prices were exactly the same.

So, we reserved two tickets for the Blue Hawaiian Big Island Spectacular tour.

One benefit of booking with the cruise line was the transportation to and from the ship. The meeting time for our tour was 10 am.

It was a solid 45 minute ride from the cruise terminal to the heliport in Waikoloa. This scenic drive was the perfect way for us to begin to get acquainted with the western side of the island.

We were docked in Hilo the day before which is certainly the lusher, greener region of the island.

Our tour bus was the only group of visitors when we arrived at the heliport. While the company does offer different flight tours on its website, our Celebrity Solstice group were about to gear up for the two hour, all encompassing, Big Island Spectacular.

The friendly staff checked everyone in and then reviewed the safety procedures. This included a short video, similar to the pre-flight overview flight attendants give on commercial flights. After verifying our weight, our larger group was divided into groups of six and given seat assignments.

Making our way to a new EcoStar Helicopter, we were introduced to our pilot Matthew. Doubling as our tour guide for the day, he was a wealth of information. Not to mention, a good pilot.

Double checking some of the safety procedures, it wasn’t long until we were buckled in for our flight. The helicopter took off just before 12 pm.

During the first leg of the tour, we headed towards Mauna Loa and some of the island’s other volcanoes. At the time of our tour (May 2019), there were no active lava fields, but still, we were able to see quite a bit, including the aftermath of the 2018 Kilauea eruption.

Ascending up to 8,000 feet, we passed high plains areas which receive less than 10 inches of rain a year. Scattered between the arid landscape were the bright purple Jacaranda trees popping up every once in a while.

We arrived to our first volcano sighting, the Hualalai Volcano, about 10 minutes into our flight. As we climbed, we could see the large lava flows that stretched a full 27 miles from the volcano’s last eruption. About 10 minutes later, we were directly over the fissures and eruption site of Mauna Loa’s massive eruption from over 150 years ago. This volcano last erupted in 1984.

Along the way, Matthew pointed out other landmarks, including an air and weather research station and a Mars training ground. As he described, the red planet couldn’t look much different than this landscape.

Returning to the Volcanoes National Park

As the helicopter continued flight, it was amazing to see the dramatic changes in topography mere miles apart. Continuing southeast, we were heading towards Kilauea. During our tour of Volcanoes National Park the day before, we viewed this volcano at ground level.

Today, we were getting a completely new perspective from the air with our Blue Hawaiian Big Island Spectacular helicopter tour.

It took about 40 minutes to reach one of the most impressive sites on this tour, the caldera at the Kilauea summit.

It is here, the lake of lava that was sitting in this shield volcano imploded. Over the course of several months, from May 2018 to August 2018, this lava erupted from 27 fissures south of the caldera, destroying hundreds of homes.

This eruption also added 800 square acres of new island, and close to five miles of new coast. That is just crazy to hear! There were no longer any active lava flows or red rivers to view during our visit. Still, this massive crater is now five times larger than it was prior to 2018.

It is certainly a marvel to witness from the sky.

We then approached another Instagram-worthy volcanic feature, the Pu’u ‘O’o Vent of the Kilauea volcano.

Actually, this section is the most active part of Kilauea and started erupting in 1983. Circling this smoldering site, we could smell the sulfur gas that was emitting from vent, even though we were thousands of feet above it.

Heading Up the Coast

After a solid hour of passing over these amazing volcanoes, we headed towards the Hamakua Coast.

In comparison to the volcanoes of the west and south, this part of the island was certainly greener. In fact, Hilo receives the most rainfall of any city in the United States. While we toured the city the day before, you could certainly see the profound difference from the air, with groves of macadamia nut trees and lush hillsides and valleys abound.

This part of the trip took us along the eastern coast, with amazing rugged sea cliffs and picturesque waterfalls. The dramatic change in scenery and coastal structure is due, in part, to a section of the island breaking away hundreds of thousands of years ago and falling into the ocean.

These views alone were worthy of the shore excursion’s price tag. You can’t appreciate the dynamic beauty of the Hawaiian islands until you can see it from high above ground level.

While part of the island used to be home to sugar plantations, the last one closed in the 1980’s. Now, a variety of agriculture and small villages dot the coast.

The highlight of this leg of the trip was flying into Waipi’o Valley, also known as the Valley of the Kings. Legend has it that King Kamehameha was raised on this part of the island. The valley is also home to ancient burial caves located in the walls of the cliffs.

Inside this massive area is the equally impressive Hiilawe Falls, dropping 1200 feet to the ocean. Not far away were the series of cascading falls known as Keyhole Falls. Again, the size and beauty of these landscapes are something you can truly appreciate from this helicopter flight.

Exiting the valleys, we flew by the state park in the Waimea Valley, which is known for hiking and other recreational activities.

Coming in for Landing

Rounding the northern point of the island around 90 minutes into our flight, we could begin to see the landscapes changing again. Still there were other sights to take in during this Blue Hawaiian Big Island Spectacular.

Among them were the Pololu Valley Beach, a public black sand beach. This drier side of the island also provided impressive views of large gulches forged from volcanic activity deep underground.

It was soon after that we could see the heliport off to our right. Our journey of exploring this dynamic island was coming to an end.

After landing, we were one of the only people to purchase the video recording of the trip! It’s too bad that the company didn’t advertise this a bit better, as it is an amazing souvenir that will help us remember this unforgettable flight.

It was also a nice aide to help with this blog post!

Being among the last of our group to return to the van, it was then another 45 minute ride back to the ship.

Whether you are visiting the Big Island of Hawaii on a cruise, or vacationing on your own, we highly recommend this flight with Blue Hawaiian Helicopters.

While it is a bit expensive ($599 a person), it is a once in a lifetime experience. Then again, we already agreed that we would certainly book another helicopter tour during a future visit to Hawaii.

There are other options too that are less costly, such as tours of just the volcanoes or the eastern coast. The company also offers tours on Oahu, Kauai, and Maui in addition to the Big Island.

The company did an excellent job of organizing and scheduling tours. Even back on land, the crew were there to answer additional questions.

Overall, the shore excursion was well managed from start to finish. We never felt rushed, and Matthew was an excellent tour guide. He answered everyone’s questions and was honest about his experiences as a newer pilot in this area. Even he had missed the Kilauea activity of 2018.

Have you visited the Big Island of Hawaii on a cruise? Do you have a Blue Hawaiian Big Island Spectacular review to share? Drop us an anchor below with your favorite Hawaiian shore excursions.

Don Bucolo, or “DB”, loves everything about cruising- the ocean, the food, and the atmosphere. While he may be obsessed with doing extensive amounts of research on ships and all elements of a cruise, Don enjoys sharing his new found knowledge with fellow cruisers. When he is not sailing the high seas, he does whatever his wife tells him to do-it only took 10 years to realize this.
Don
Previous Post « Top Things to Do in Key West, Florida on a Cruise
Next Post Cruise News September 25, 2020 Edition »