Home » Review: Playmakers Sports Bar and Arcade on Mariner of the Seas

We are back from a recent cruise and have our honest review of the new Playmakers Sports Bar and Arcade on the newly amplified Mariner of the Seas. 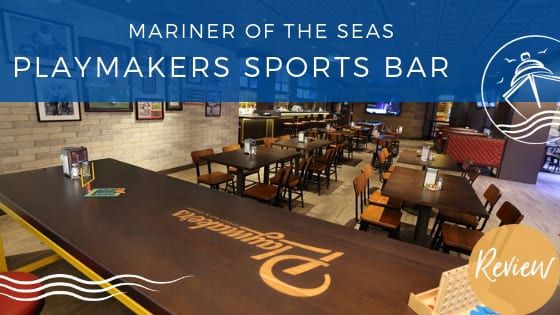 Review: Playmakers Sports Bar and Arcade on Mariner of the Seas

On Mariner of the Seas, Playmakers Sports Bar and Arcade is located on the Royal Promenade, Deck 5. Located on the portside of the ship, the lounge is directly across from the Cafe Promenade coffee shop and cafe. 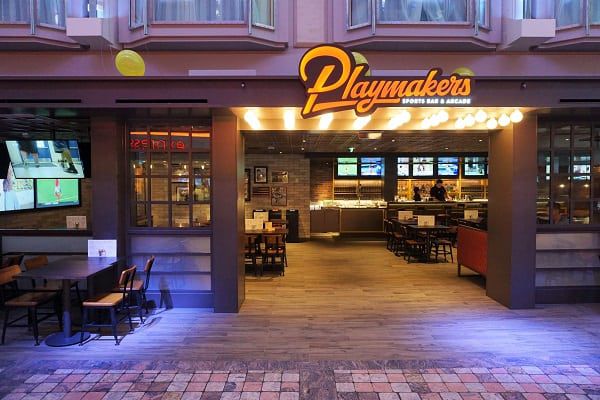 During our three-day cruise onboard the ship, the bar portion opened at 11 am daily. This makes it one of the few inside bars that is open during the day. However, the kitchen did not open until 3 pm on port days.

Inside Playmakers Sports Bar and Arcade

The venue has a warm, clean decor with a few booths and several tables as well as a large, central bar. The setup and decor is reminiscent of a pub that you would find back home. In fact, the venue reminded me a lot of a Buffalo Wild Wings or similar style restaurant. 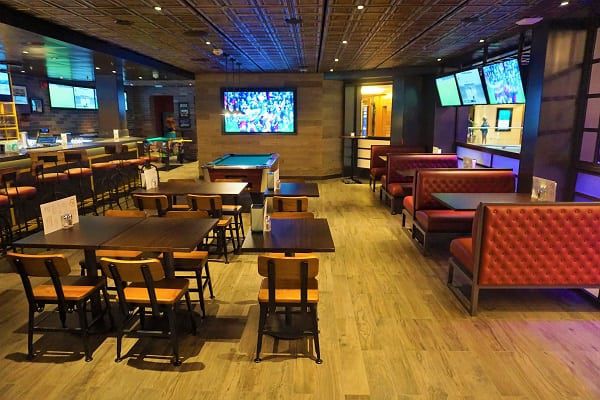 Virtual every wall in Playmakers is covered with flat-screen televisions broadcasting various sports games. During our July cruise, most of the sports were international games.

The “arcade” section of the venue was rather small. It consisted of a foosball table, a pool table, and a few video games located in a back corner. 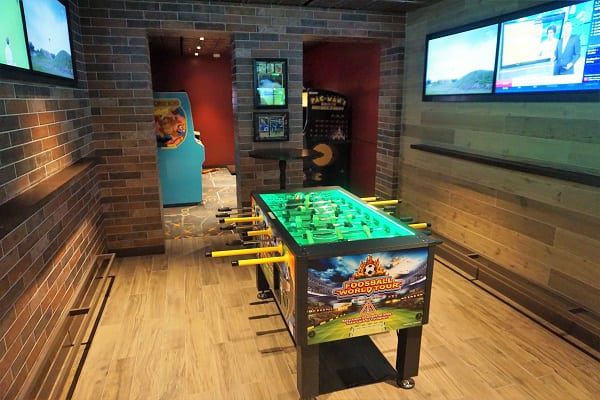 If you are really looking for some video game action, you will have a much better selection at the Arcade on Deck 12. Actually, it is one of the largest arcades that we have seen on a Royal Caribbean ship in quite some time.

One downside to Playmakers is that there was limited waitstaff. The bartenders working behind the bar also had to act as the servers. This can make it difficult to order food when the venue gets busy. Given the popularity of the restaurant, we hope Royal Caribbean adds some additional staff to improve the overall service.

The Drinks at Playmakers Sports Bar and Arcade

The drink menu (which you can download here) consists of a wide selection of beers. This makes complete sense as it is a sports bar, and most fans like to through a few back while watching a game. That said, there were also a few specialty cocktails on the menu, so the Princess was happy too!

All of the drinks are covered in the Royal Caribbean Deluxe Beverage Package, except for the bottles of wine and the pitchers of beer. For those paying a la carte, the beers were priced between $6-8. All of the specialty cocktails were priced at $12. 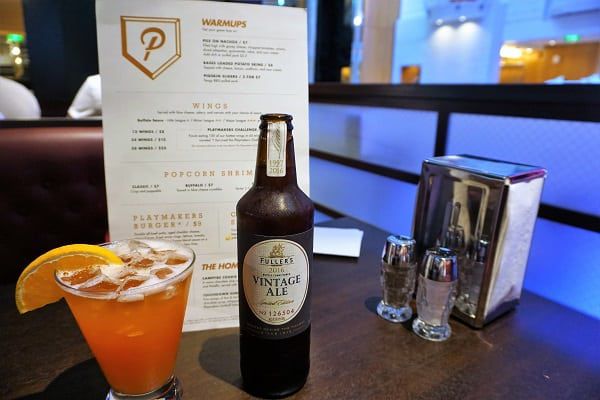 During our stop, I decided to try a Fullers Vintage Ale and the Princess tested out the Knockout Punch cocktail.

The Food at Playmakers Sports Bar and Arcade

The food menu (download here) is the same all day long and consists of a variety of different snacks. All of the food is priced a la carte, and the specialty dining package is not accepted at this venue. 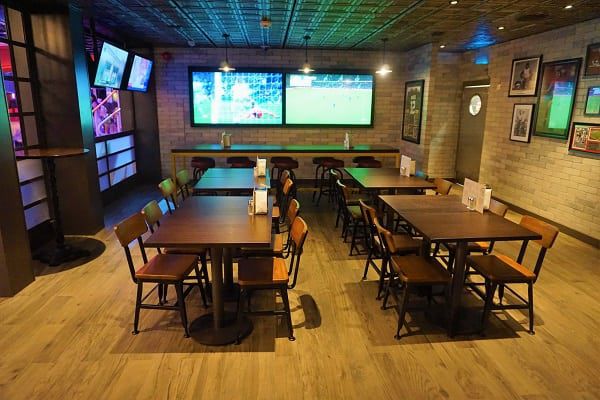 For our test run, we popped in to the venue one afternoon for a late day “light” lunch. Looking around at a few other tables, we decided to order the nachos and some buffalo wings.

After waiting quite some time in a not so busy restaurant for a server, I decided to go to the bar to order. The bartender indicated that he would come by the table to take our food order in a few moments. After placing our order, it only took about 15 minutes for the food to be served. 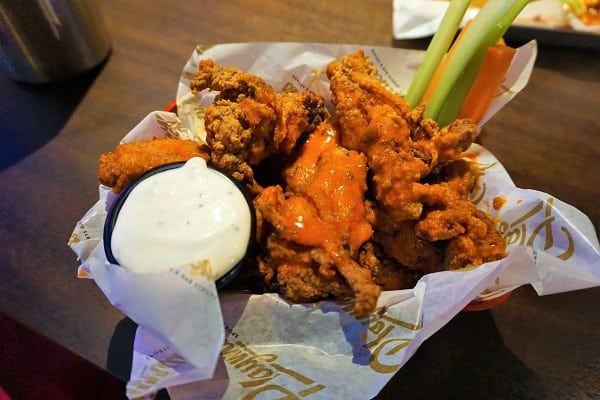 If you have the time, and the stomach, you can try to conquer the Playmakers’ Challenge, devouring 100 hot wings in 45 minutes. The prize…a t-shirt and some heartburn!

Our order of nachos was also a hefty portion that had a great mixture of nacho cheese and other accompaniments. We were both very happy with the flavor and combination of toppings.

The only problem was that the order of nachos was served room temperature. It was apparent that the nachos had probably been sitting in the kitchen for a while waiting for the wings. 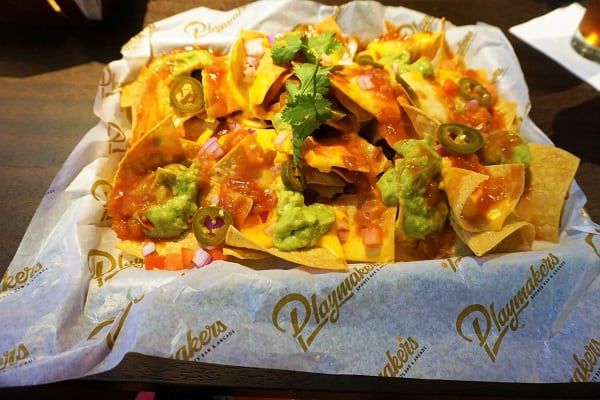 This new bar and restaurant is a welcome addition to Mariner of the Seas. A lively location to watch the game or have some snacks, Playmakers is great spot to catch all of the action.

Given the location, you can always stop by for a quick drink in between the Royal Promenade events like the parades and parties. While we are not huge fans of paying for food on a cruise, grabbing some snacks at this restaurant was a nice alternative to the other dining options on the ship.

Given the a la carte pricing, it was reasonably priced for generous portions. We would certainly dine at Playmakers Sports Bar and Arcade again. Probably pretty soon in fact, on our upcoming sailing on Symphony of the Seas.

Have you tried Playmakers Sports Bar and Arcade yet? What do you like about this new venue? Drop us an anchor below with your review of this establishment.

Don Bucolo, or “DB”, loves everything about cruising- the ocean, the food, and the atmosphere. While he may be obsessed with doing extensive amounts of research on ships and all elements of a cruise, Don enjoys sharing his new found knowledge with fellow cruisers. When he is not sailing the high seas, he does whatever his wife tells him to do-it only took 10 years to realize this.
Don
Previous Post « Review: Jamie’s Italian on Mariner of the Seas
Next Post 10 Essential Tips for Planning a Holiday Cruise in 2019 »

Review: Playmakers Sports Bar and Arcade on Mariner of the Seas