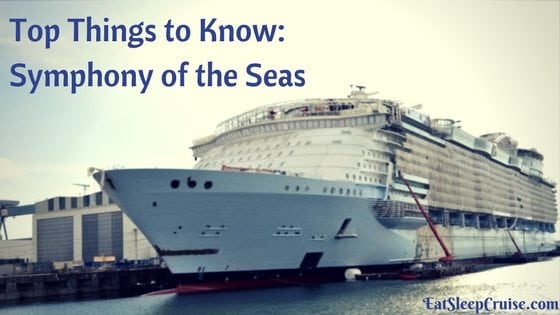 The 25th ship in Royal Caribbean’s fleet, Symphony of the Seas will debut in April of 2018. The ship will sail a summer season in the Mediterranean before heading stateside. Beginning in November, the ship will call Miami, Florida home. The new state-of-the-art terminal in PortMiami will process guests sailing on this action-packed ship. Symphony of the Seas will sail alternating Eastern and Western Caribbean itineraries from Miami. We are booked on the Thanksgiving week sailing and can’t wait!

Largest Ship in the World

Weighing in at 230,000 gross tons, Symphony of the Seas will officially be the largest ship in the world. Upon debut, she will take the crown from her older sister, Harmony of the Seas. With 16 decks, a guest capacity of 5,500, and 2,774 staterooms, this ship will offer tons of fun to cruisers of all ages. With seven distinct neighborhoods, state-of-the-art technology, and action-packed entertainment, there is certainly a lot to do in a week-long cruise! 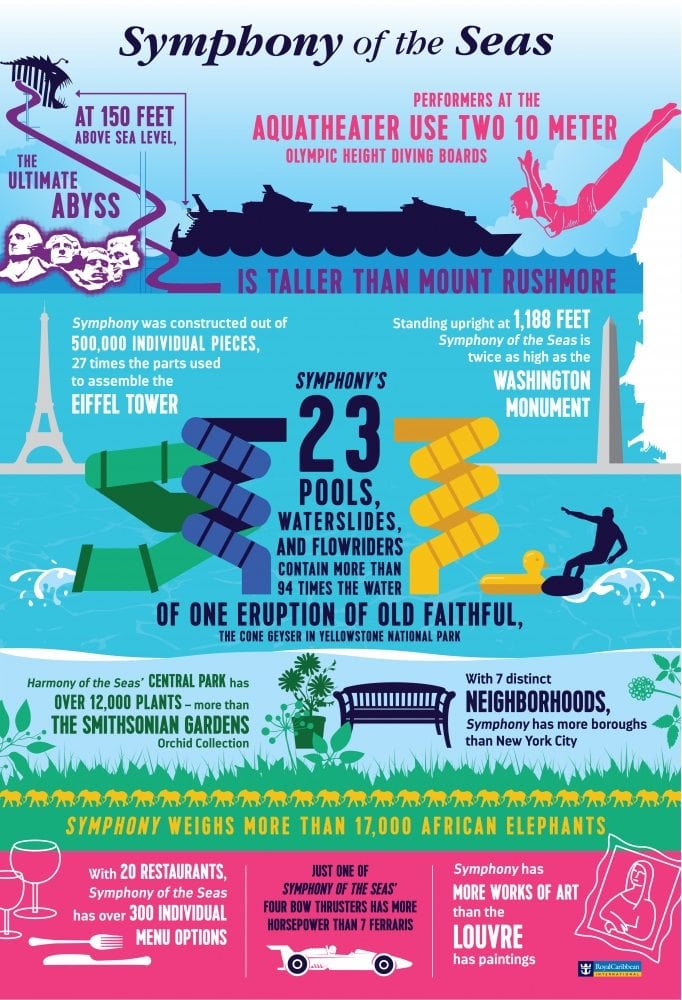 Symphony of the Seas will follow suit with her sisters offering all the excitement and charm of the Boardwalk and Central Park neighborhoods. With the high-diving thrills of the Aqua Theater and the tranquil green spaces of Central Park, it’s no surprise that Royal Caribbean will have even more balcony staterooms overlooking these legendary neighborhoods on Symphony of the Seas. The Boardwalk will feature familiar favorites like the hand-carved carousel and Johnny Rockets restaurant. Central Park will feature signature specialty restaurants, Vintages wine bar, and the cruiser favorite Park Café.

A new venue debuting on Symphony of the Seas, Playmakers Sports Bar will bring a whole new level of entertainment to the Boardwalk. Spanning the entire neighborhood, this family-friendly venue will be your spot to watch a game on the 30 big screen televisions, enjoy some pub fare, or compete in some arcade games like Pac-Man, skee-ball, and more. 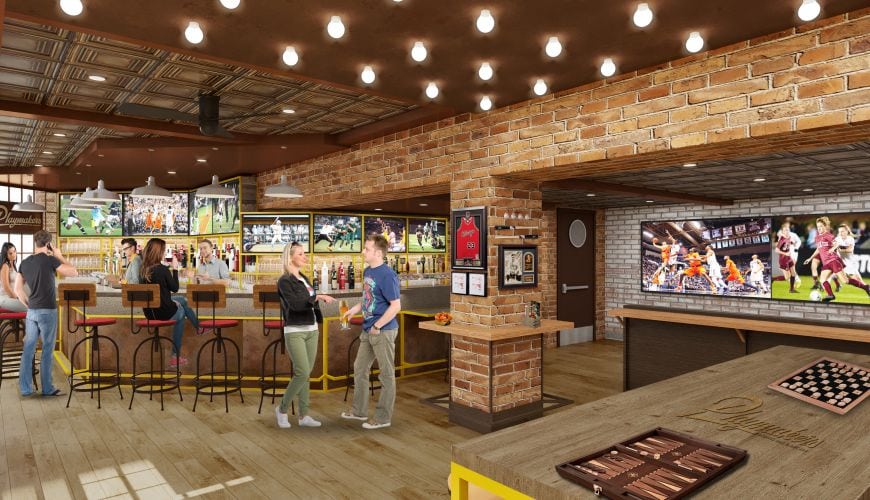 This snack shack, also located on the Boardwalk, will offer tasty candy and ice-cream shop treats for the family to enjoy. After you’ve worked up an appetite in a friendly arcade competition, Sugar Beach will certainly hit the spot. This venue will also host activities for “aspirational bakers”. Just be sure to save some room for a milkshake from Johnny Rockets and a dog from the Boardwalk Doghouse too. After all, you are on vacation!

The Aqua Theater, the outdoor amphitheater on Oasis-class ships, will feature a brand new aqua show called Hiro. Claiming to offer serious WOW factor, this show will offer more high-flying feats, stunts, and acrobatics than ever before. With the ocean as its backdrop, this show is sure to cause a big splash when it debuts.

Symphony of the Seas will debut the world’s most adventurous and interactive family suite with a floor plan boasting 1, 346 square feet. This 2-story accommodation will feature a slide from the kid’s only bedroom, a floor to ceiling LEGO wall, an air hockey table, a separate 3D movie theater room complete with a popcorn machine and video games, and a 212-square foot wrap-around balcony. This larger than life balcony will feature a bumper pool table, climbing wall, and a full-sized whirlpool. These suites will accommodate up to 8 family members and come with a Royal Genie to take care of all your needs. 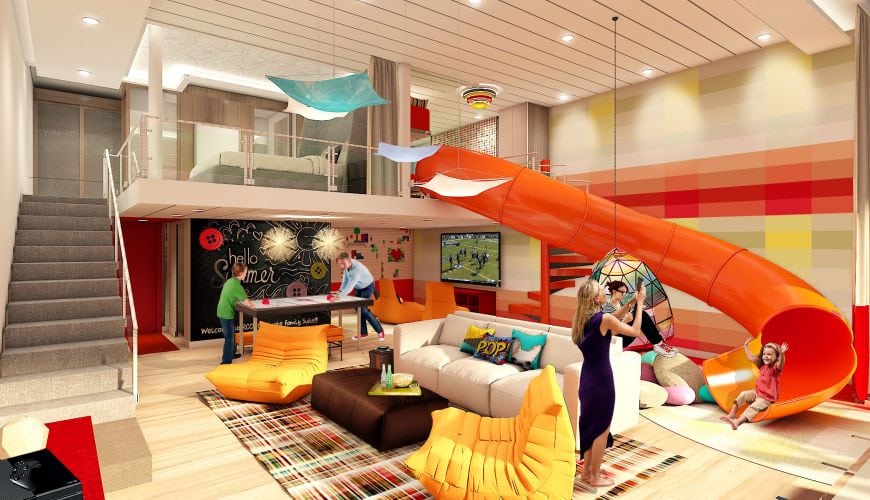 Adding to Royal Caribbean favorites like Chop’s Grille, Wonderland, Jamie’s Italian, 150 Central Park, and Izumi Hibachi and Sushi, Symphony of the Seas will also debut some new culinary creations. Hooked Seafood will be Royal Caribbean’s first New England style seafood restaurant featuring fresh seafood and a raw bar. Can it live up to true New Englanders’ standards? To be determined… El Loco Fresh will be the cruise line’s new take on Mexican. This restaurant will serve up made to order favorites in an open-air venue on the Sports Deck.

Royal Caribbean’s first Broadway musical at sea is back by popular demand. The Tony-award winning hit Hairspray will take the stage on Symphony of the Seas. This re-imagined show with “big hair, don’t care” will headline in the Royal Theater. This show is sure to have fans grooving along to the 1960’s style dance music. In addition, a new original production called Flight will headline in the main theater. This show is billed as a satire on the evolution of air travel with homage to the Wright Brothers. Sounds reminiscent of Columbus, The Musical! on Harmony of the Seas. 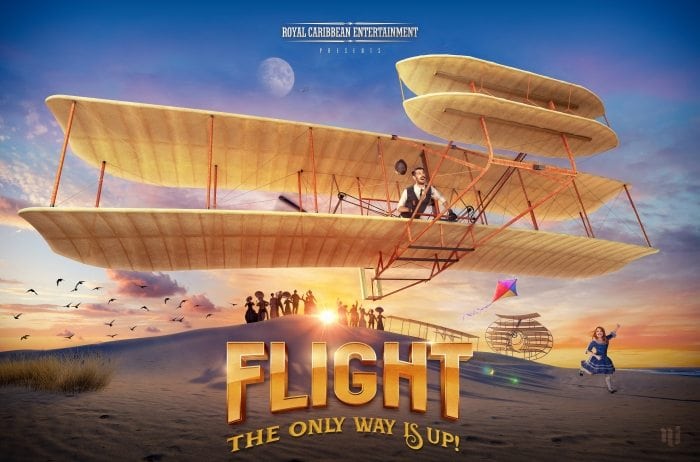 This redesigned check-in experience will utilize the latest technology, including facial recognition, to make the boarding process the fastest and most efficient ever. Guests will check-in using a new mobile app and uploaded a security photo prior to embarkation. Upon arrival at the terminal, you will be able to head straight to your stateroom after a security screening. SeaPass cards will be waiting in your staterooms.

Keeping with tradition, Studio B on Symphony of the Seas will host an all new ice show, 1977. 1977 is set in London and tells the story of a heist of the Queen’s Crown Jewels. But, Studio B will also serve as the stage for an out of this world game of glow in the dark laser tag. Offering high-tech technology and special effects, this ultimate adventure is sure to be a hit on Symphony of the Seas. 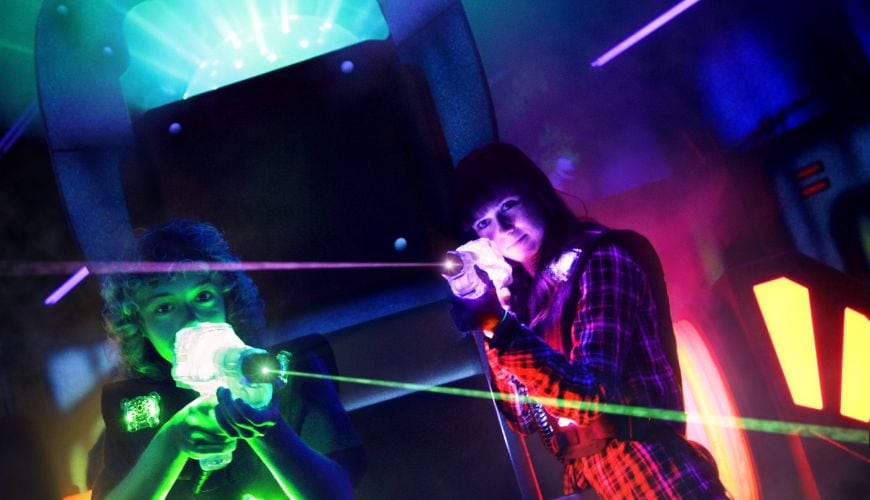 Similar to Harmony of the Seas, Symphony of the Seas’ pool and sport decks will feature the Ultimate Abyss (with a new twist), the Perfect Storm trio of waterslides, and the kid’s only waterpark at sea, Splashaway Bay. Familiar Royal Caribbean favorites like the Flowrider surf simulator, mini-golf, zip line, and rock-climbing wall will also make appearances on this new record-breaking ship.

Are you ready? Do you have a cruise booked on Symphony of the Seas yet? What new feature are you looking forward to the most? Drop us an anchor below to share your thoughts on this latest reveal. 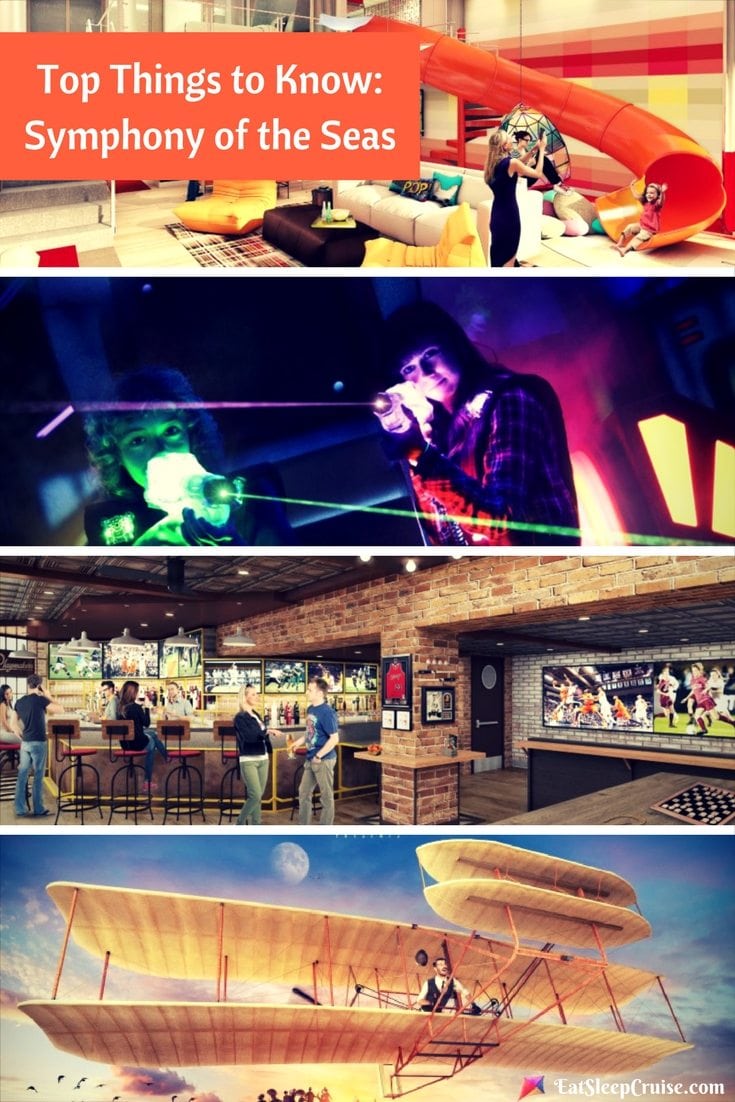