One of Norwegian Cruise Line’s biggest ships, Norwegian Getaway delivers plenty of nightly entertainment to please the entire family. With so much entertainment, it is especially hard to cram everything into one 7-night cruise. As 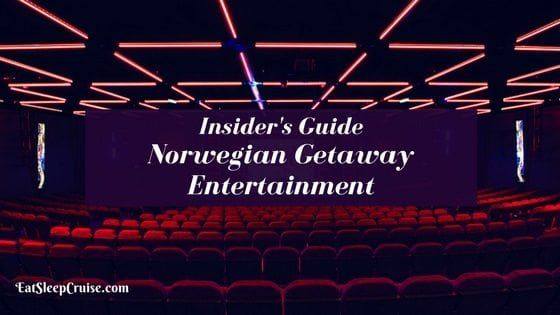 Norwegian Getaway boasts two signature production shows in the main theater for which reservations are required. You have a few options for reserving this entertainment. Before the cruise, you can book shows 90 days prior to your sailing using your MyNCL account. Once onboard, you can head to the box office, use the Norwegian iConcierge app, or reserve shows using your stateroom television. Make reservations for these shows as soon as possible as you don’t want to be stuck in the standby line!

This non-stop, high energy dance revue fuses contemporary music with sultry dance routines. This 60-minute production runs through various scenes with a talented cast of dancers. There are also two main vocal performers who were rock solid. These Latin dances heat up the stage and keep the audience fully engaged during one of our favorite cruise ship shows to date! On our cruise, the show occurred on Night 2 and Night 3 at 7:30pm and 10:30pm. 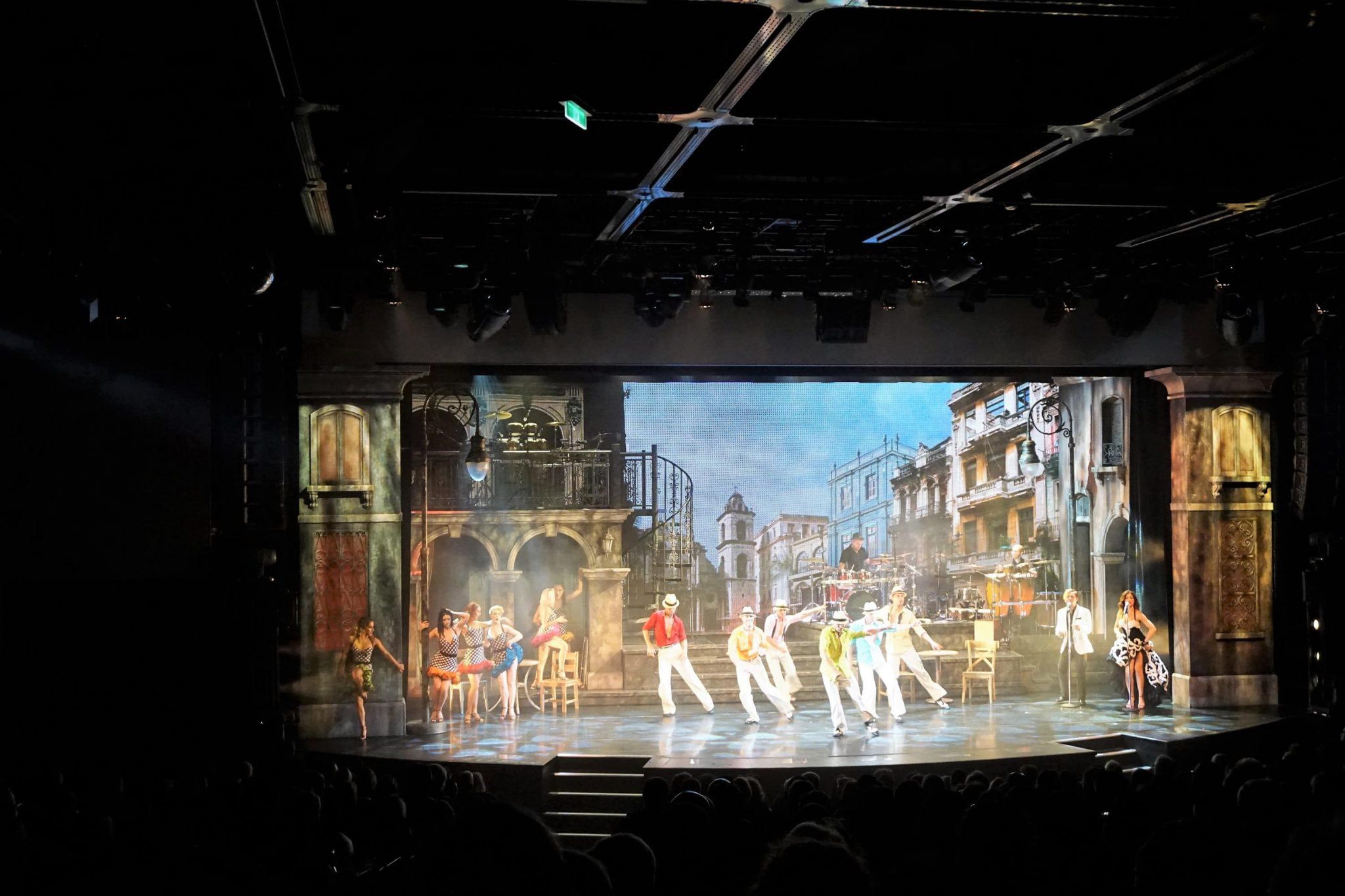 Rock and Roll music, any old way you choose it. On Night 5 and Night 6 of your cruise at 7:15pm and 10:15pm, you will be transported to the golden age of rock and roll. The award-winning Million Dollar Quartet retells the night in which four rock and roll icons- Johnny Cash, Elvis Presley, Jerry Lee Lewis, and Carl Perkins, came together for one epic jam session. Cruisers of all ages who appreciate golden oldies will love this loud and entertaining show, which features performers singing and playing all of their own instruments. This show’s run time is 90 minutes. 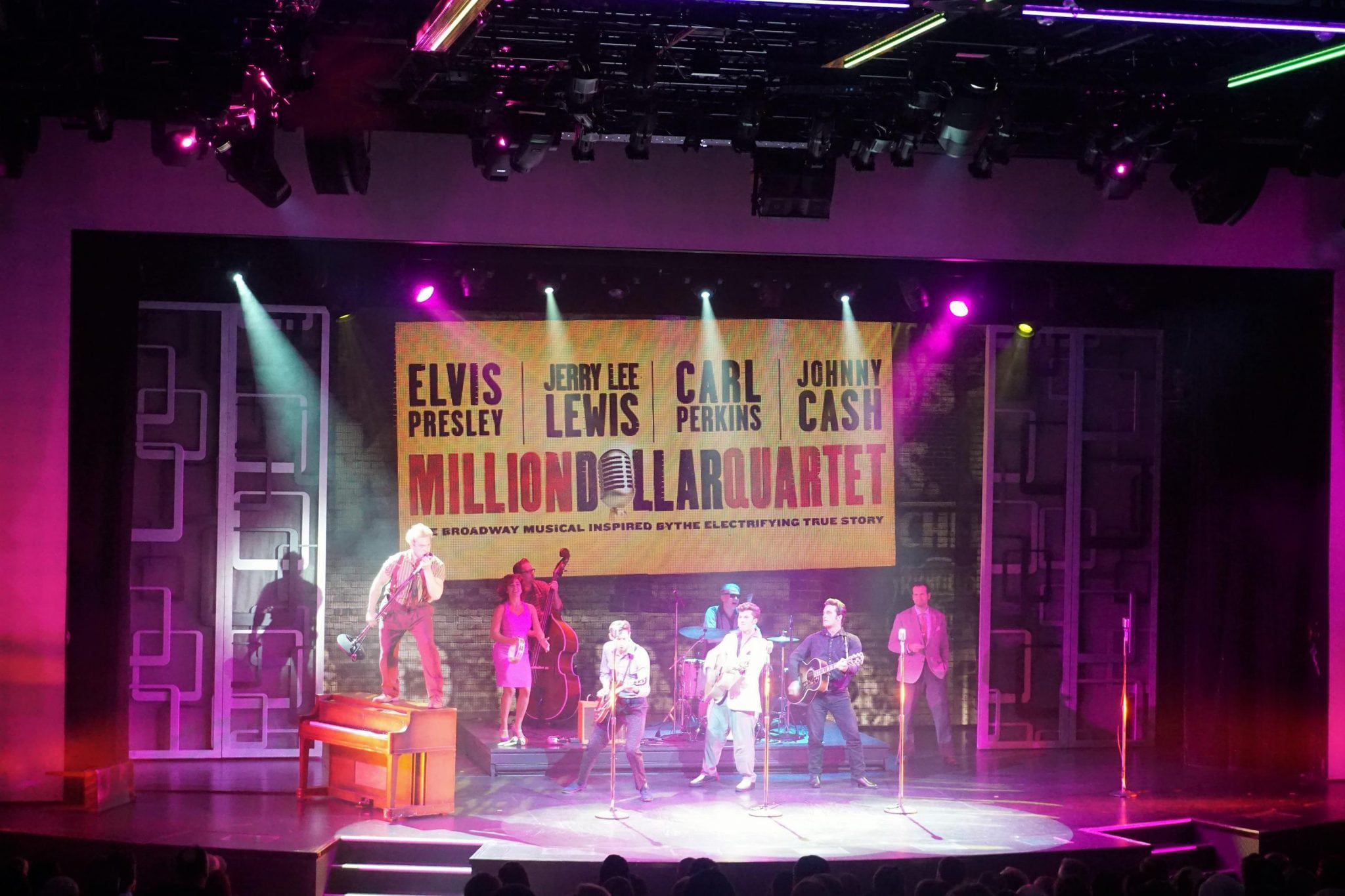 Some shows on Norwegian Getaway are available on a first come, first serve basis. There was a Welcome Aboard Variety show that took place at 7:30pm on Day 1. On our sailing, there was also a comedy show on Day 4. This show featured the same comedians from Headliner’s (see below) performing different material.  Both an early “family” show and a late night “adult” show are offered. On the last night, your crew goes the extra mile with the International Crew Talent Show. If you arrive 15 minutes before showtime, you should not have trouble finding seats for these events.

You will also find plenty of Norwegian Getaway entertainment outside of the main theater. In fact, many different venues throughout the ship offer nightly shows. Headliner’s Comedy Club is a small venue that holds two different shows, rotating over the 7 nights of the cruise. 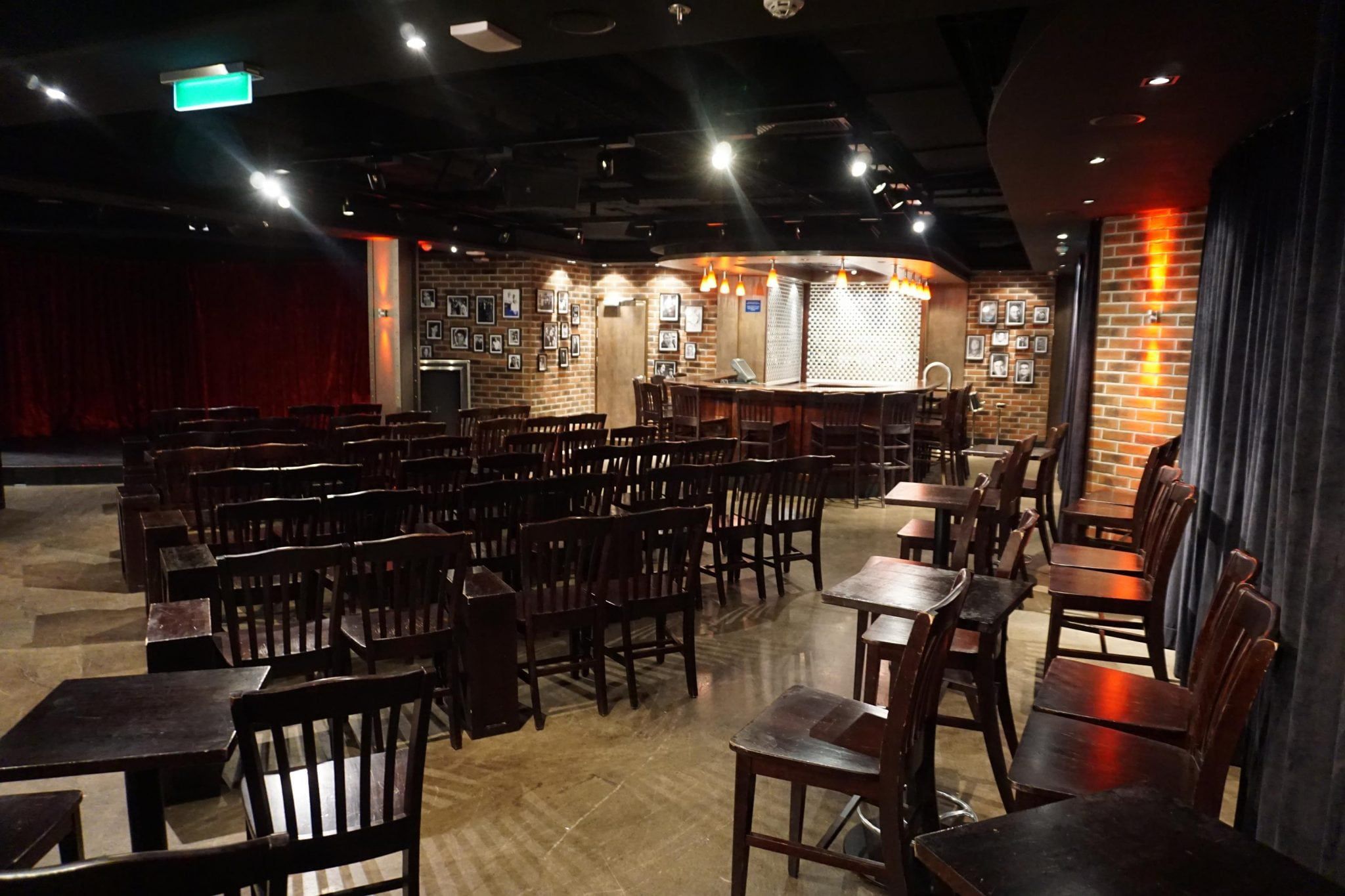 Get ready to laugh out loud. The line-up of comedy changes regularly, but you’ll probably recognize some of the names and faces from late night television or premium cable comedy specials. For this trip, we had Dan Gabriel, Frank Townsend, and host Tim Homayoon. Comedy shows occurred nights  2, 3, 5, and 6. On most nights, there is a 7:00pm and 9:00pm show with a few evenings including an 11:00pm “late show”. Note, the earlier shows are family friendly, but the 11:00pm show is adults only. We recommend making reservations for these shows as soon as you board the ship as they do sell out quickly and standby lines can get quite long. 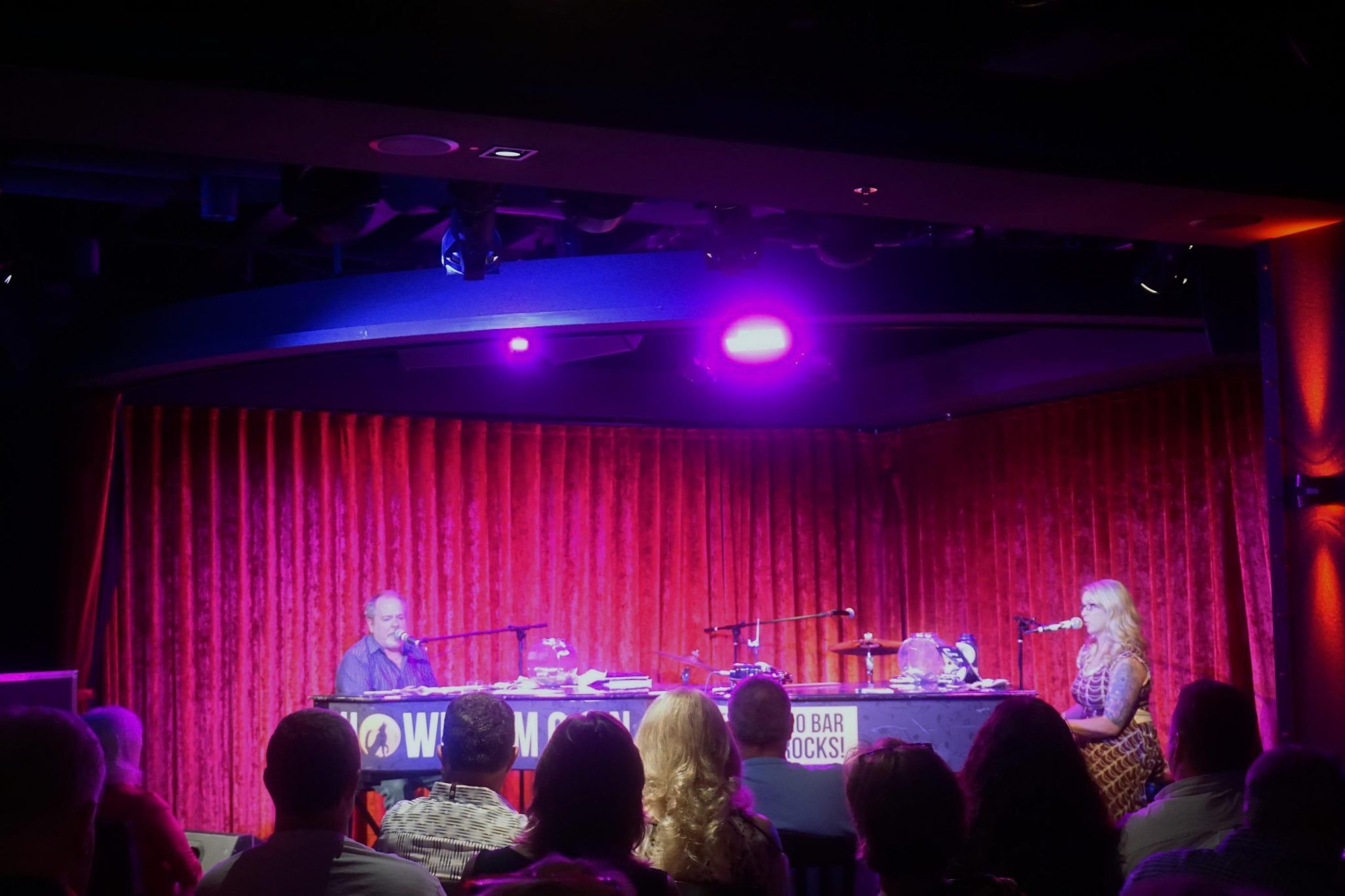 The Atrium on Deck 6 hosts a variety of entertainment. Events include dance classes, trivia contests, 3D movies, and demonstrations. There is something occurring in this central hub most times of the day. Check your daily schedule for a complete listing of the entire day’s events. Here is a list of some of the night time shows that were offered on our 7 Night Western Caribbean Cruise:

First of all, Norwegians know how to party. So of course, some of the most popular Norwegian Getaway entertainment offerings are the dance parties. Starting around 10:30pm each night, you will need to get to Spice H20 early if you want to be in the center of all the action at these parties.  During our cruise, the parties included: In addition to the stage shows, there is plenty of other live music to be found throughout the ship. On our cruise, there were a couple of piano players, a live band, and other duos that could be found in several of the bars and lounges. Find your favorite performers and your go-to lounge, then check the daily schedules for exact times as the performers do take scheduled breaks throughout the evening. 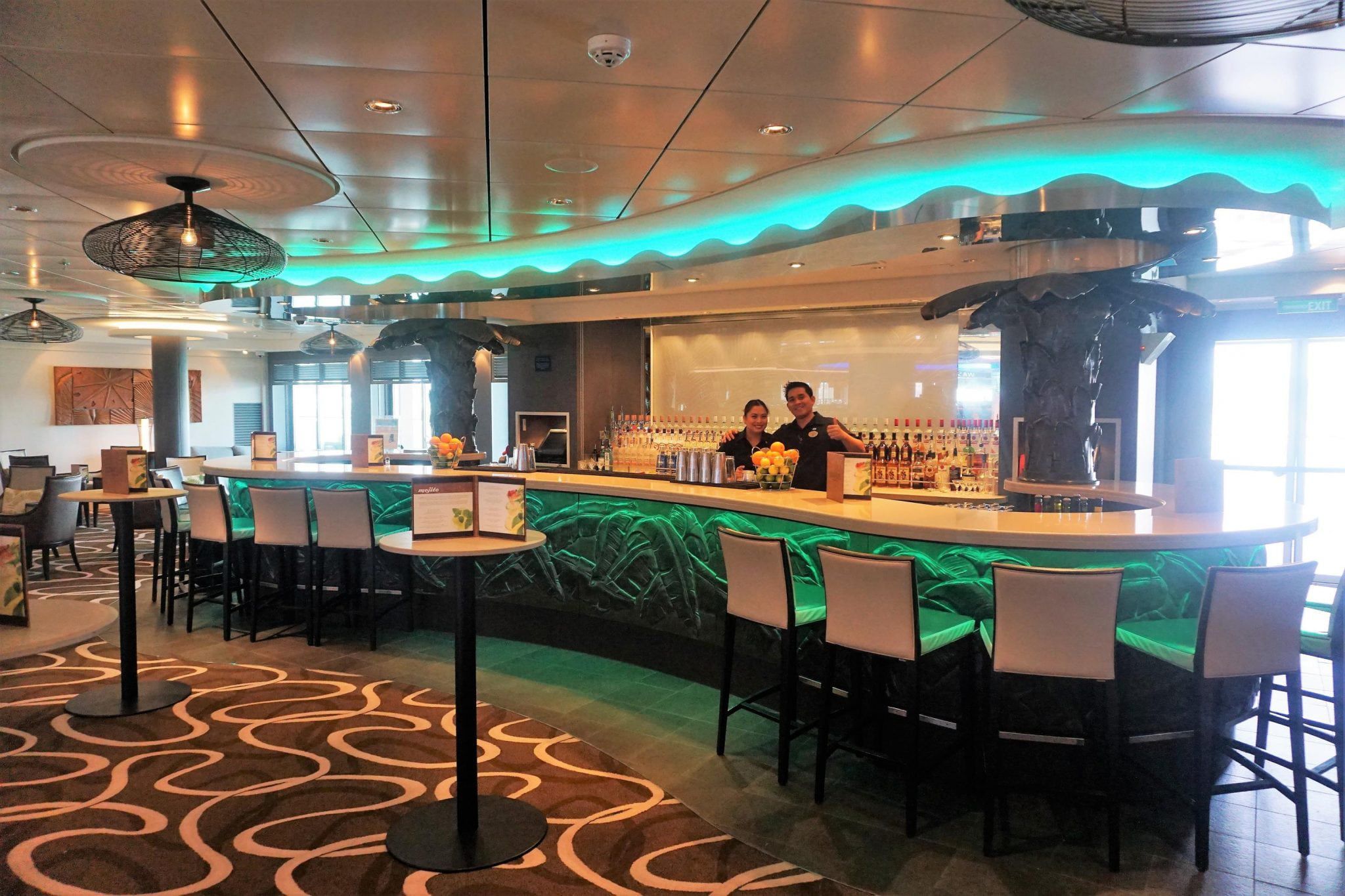 During our cruise, live music was featured nightly at the Sugarcane Mojito Bar and the Atrium (in between shows and other events). Karaoke took place most nights in Fat Cats. And, you can’t miss the late night party at Bliss Ultra Lounge where the resident DJ spins the latest dance hits and club jams.

Brand new to Norwegian Getaway is the Cirque Dreams show taking place in the immersive and technologically enhanced dinner show room known as the Illusionarium. Be mesmerized by the acrobatic feats of these performers while dining on a three course meal. Show times occur nightly with tickets starting at $29.95. Since this show is brand new, we did not have a chance to see Cirque Dreams first hand during our sailing on Norwegian Getaway in March; however, early reviews have given the show two big thumbs up. 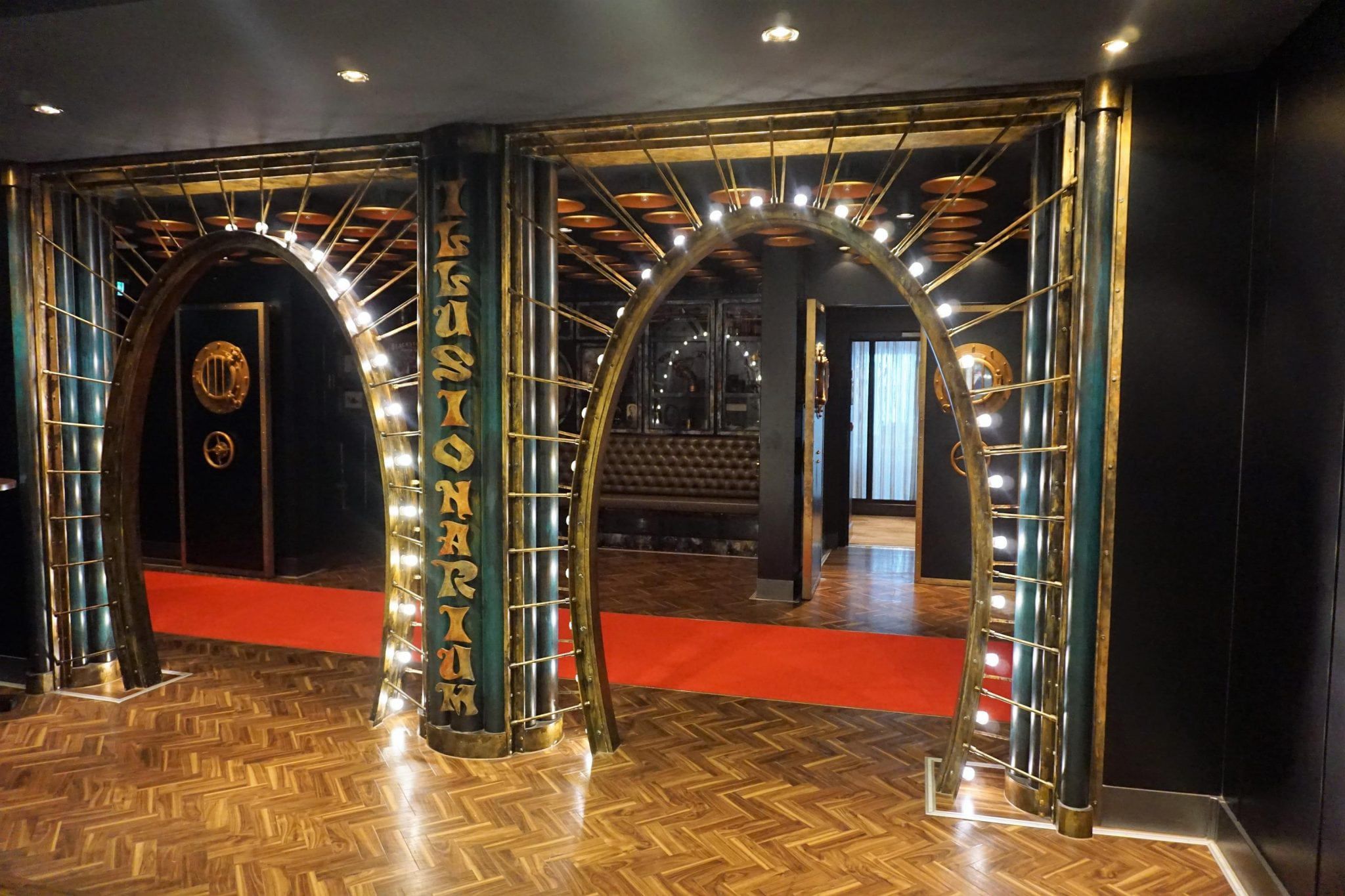 Also brand new to Norwegian Getaway is a complimentary escape room experience. Available three times during our trip- on Day 2 at 2:00pm, Day 3 at 7:00pm, and Day 7 at 2:30pm- your mind is put to the ultimate task. This hour long “game” occurs in teams of 8 people and is reserved for a total of approximately 60 guests per show. Make sure to sign up early at the Box office to guarantee your spot. Then, be prepared to challenge yourself as you and your fellow cruisers set out to be the first group to solve all of the circus-related clues to make it out of the Big Top a winner. Do you have what it takes to rise to the occasion?

Have you cruised on Norwegian Getaway? What is your favorite onboard entertainment? Drop us an anchor below to share your entertainment reviews with fellow cruisers. 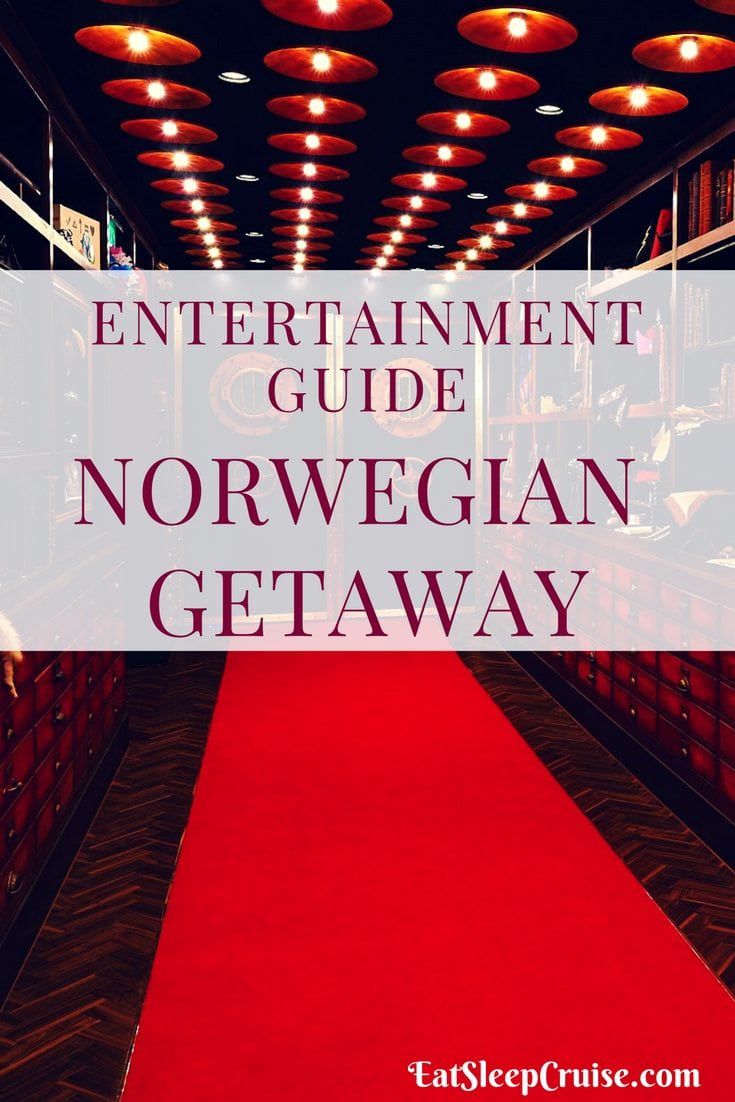 Don Bucolo, or “DB”, loves everything about cruising- the ocean, the food, and the atmosphere. While he may be obsessed with doing extensive amounts of research on ships and all elements of a cruise, Don enjoys sharing his new found knowledge with fellow cruisers. When he is not sailing the high seas, he does whatever his wife tells him to do-it only took 10 years to realize this.
Don
Previous Post « Cruise News July 23, 2017
Next Post Guide to Norwegian Sky Restaurants »