Want a unique way to see the natural beauty of Jamaica? Then prepare yourself for a serene and informative ride with our Martha Brae River Rafting Tour Review. An hour long journey down three miles 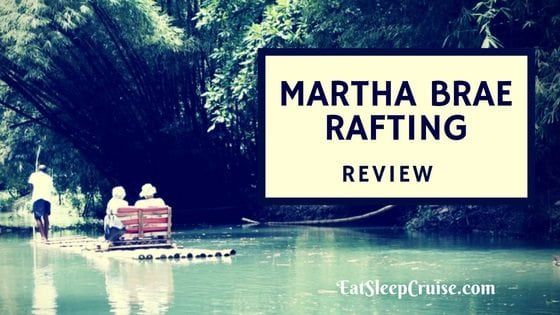 It has been a few years since we lasted visited Jamaica. In fact, our last stop in Falmouth was aboard Oasis of the Seas’ sister ship, Allure of the Seas in 2013. After pushing the Princess to her limits on that trip by climbing Dunn’s River Falls, we opted for something more relaxed and low key this time around. Based our her thorough review of the tour options, the Princess decided we should try the Martha Brae River Rafting tour. 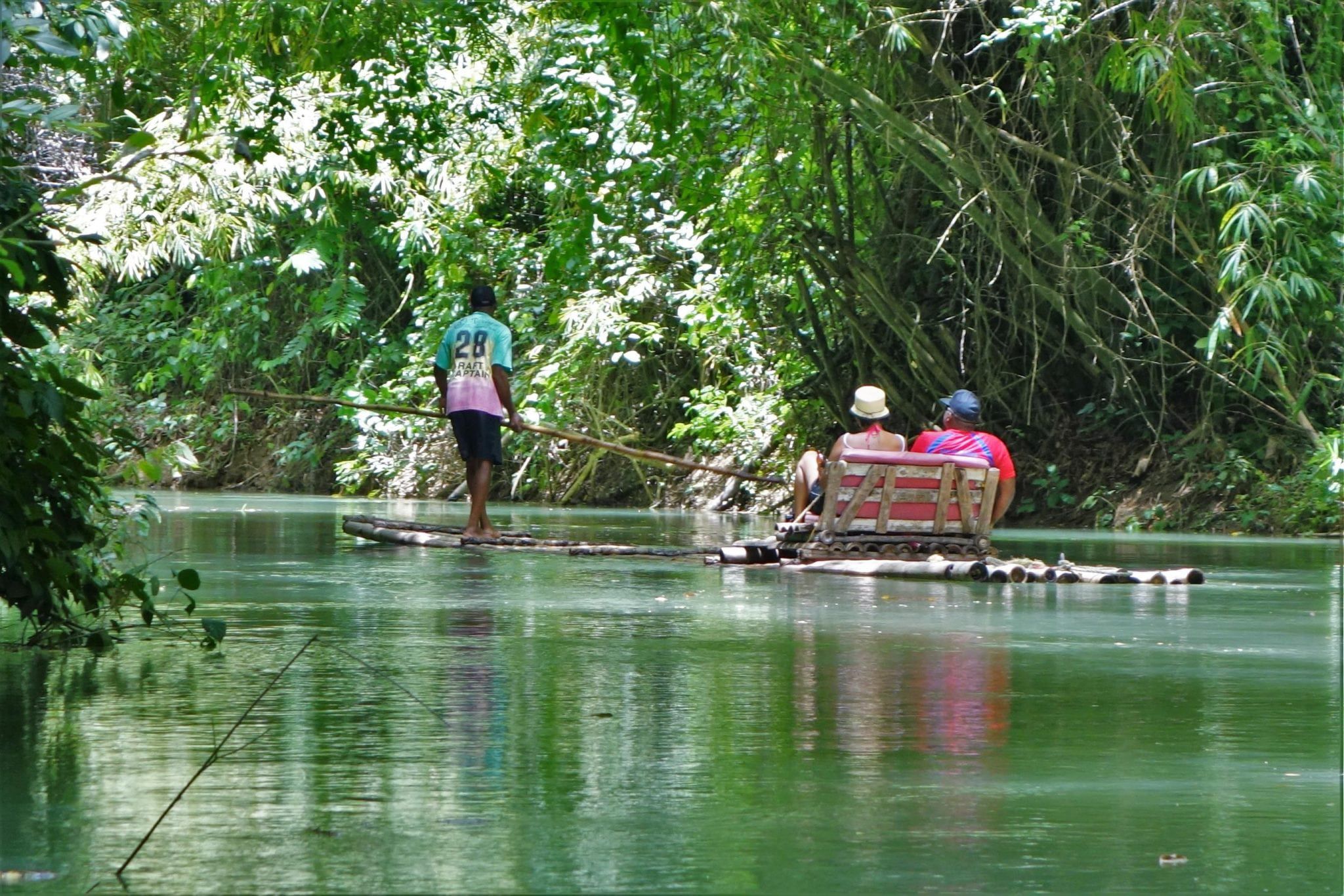 Realizing we would not be docking until after our scheduled tour time, we called Royal Caribbean pre-cruise in attempt to resolve this time conflict but to no avail. We did not learn our new departure time until we were onboard. Actually, the time for our tour changed twice, receiving notification the day before the shore excursion that it would now depart even later. Altering plans for our day in Falmouth, we would now need to explore the port area and shops prior to our excursion. 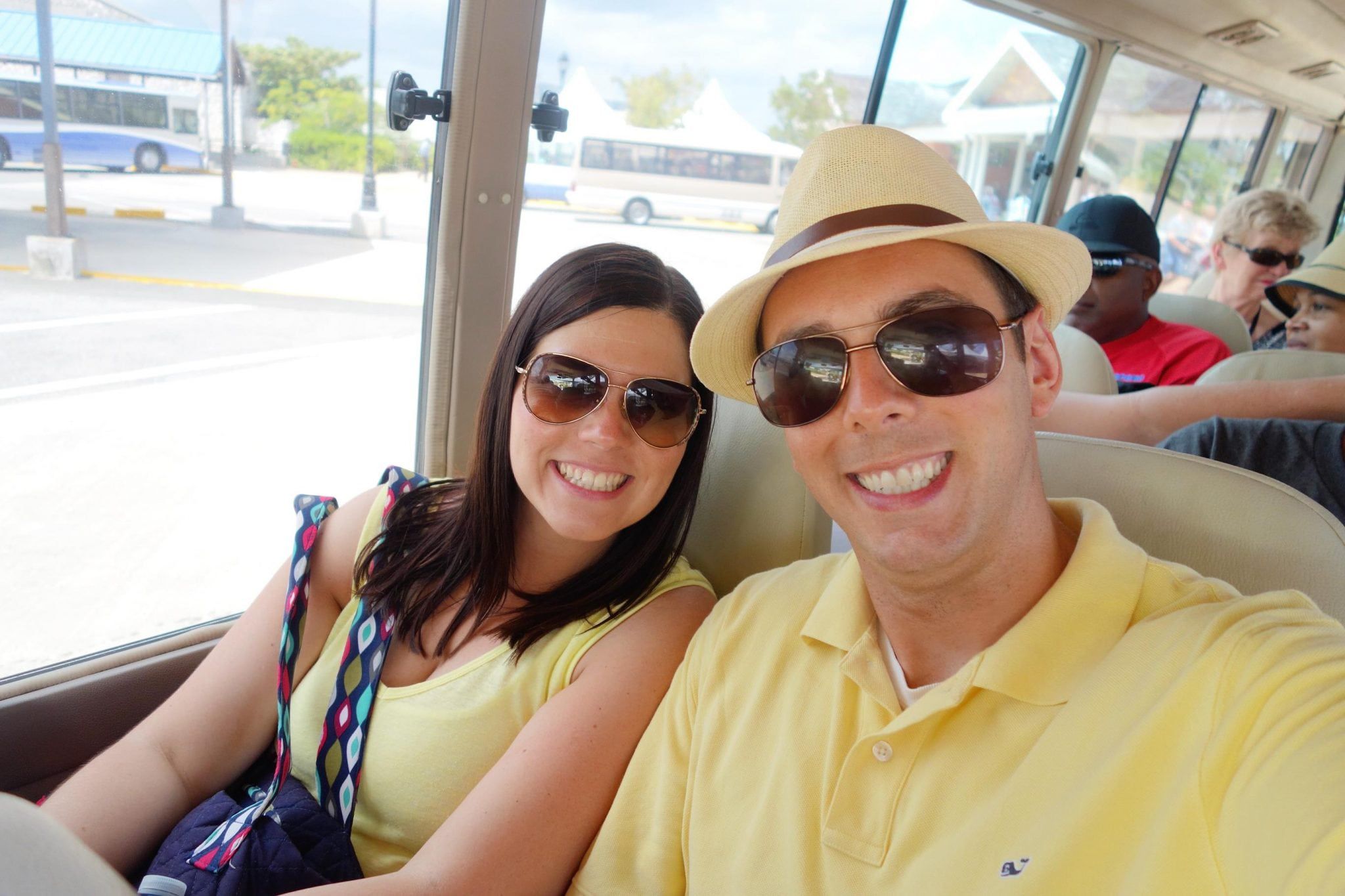 After some brief shopping and exploration, we arrived at the designated meeting point about 30 minutes prior to our noon departure time. We could tell from the get go that this was going to be an unorganized tour. Our tour “guide” was not very personable and did not seem to know the exact number of passengers booked on this tour. She loaded us on a bus 15 minutes early and told the driver to leave while she waited for the remaining guests. Located only a short distance away from the cruise pier, the bus ride to the Martha Brae River Rafting village took around 10 minutes. Since the tour guide was not on our bus, the driver did his best to tell us a bit about Jamaica and the tour. 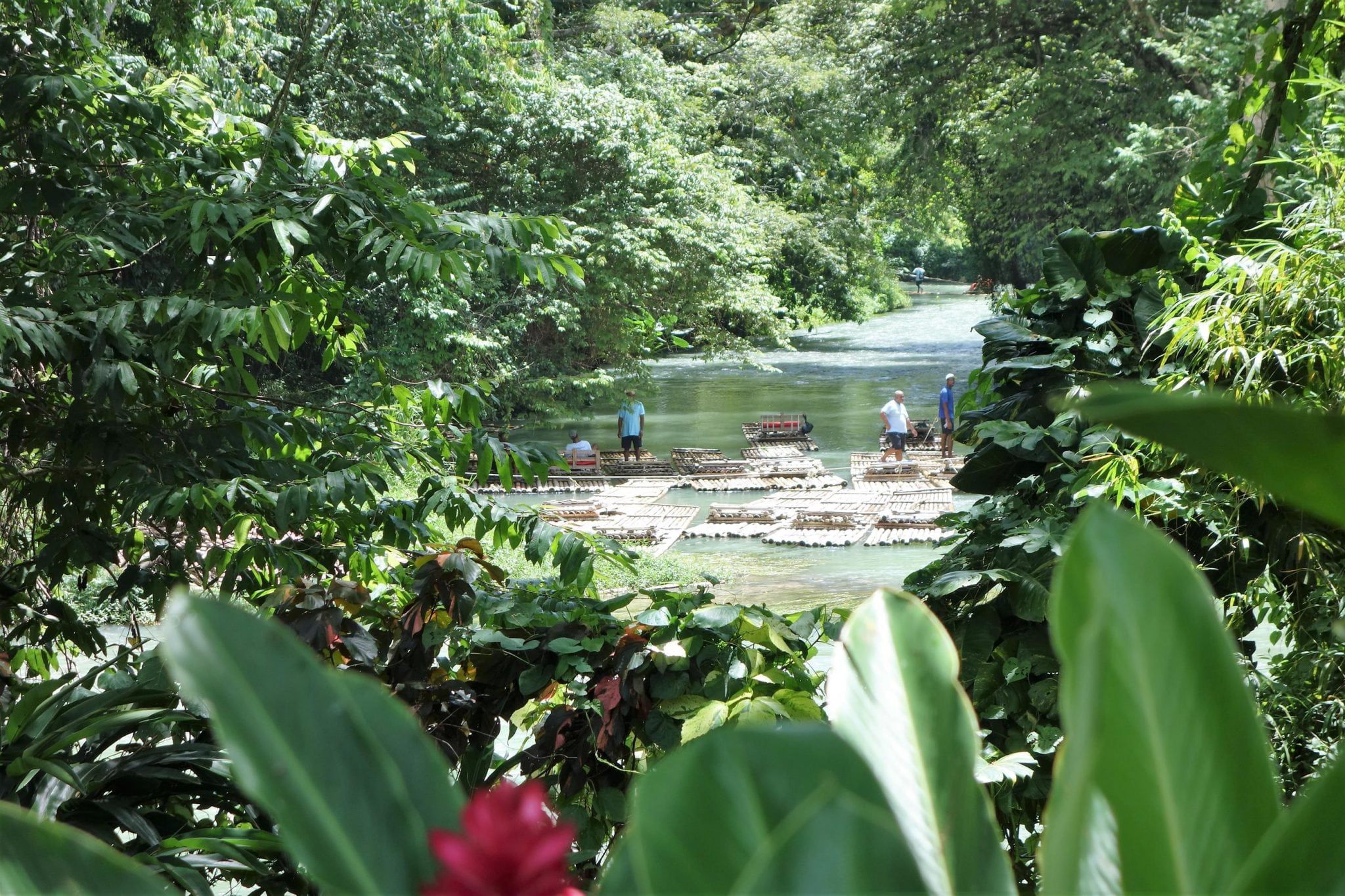 We Can See the Boats!

Arriving at the Rafting village, it was not exactly what we expected. Our bus driver, Michael, told us to walk down through the entrance, but we were given no tickets, wrist bands, or stickers indicating our tour. The village consists of only a few structures, including a small bar, two small gift shop huts, bathrooms, and some public areas including a pool. Of course, the Princess made a pit stop at the bathroom, while I visited the bar. Getting my “complimentary” drink, I opted for the additional shot of rum for a few dollars to get the tour started off right. After all, it was technically afternoon. 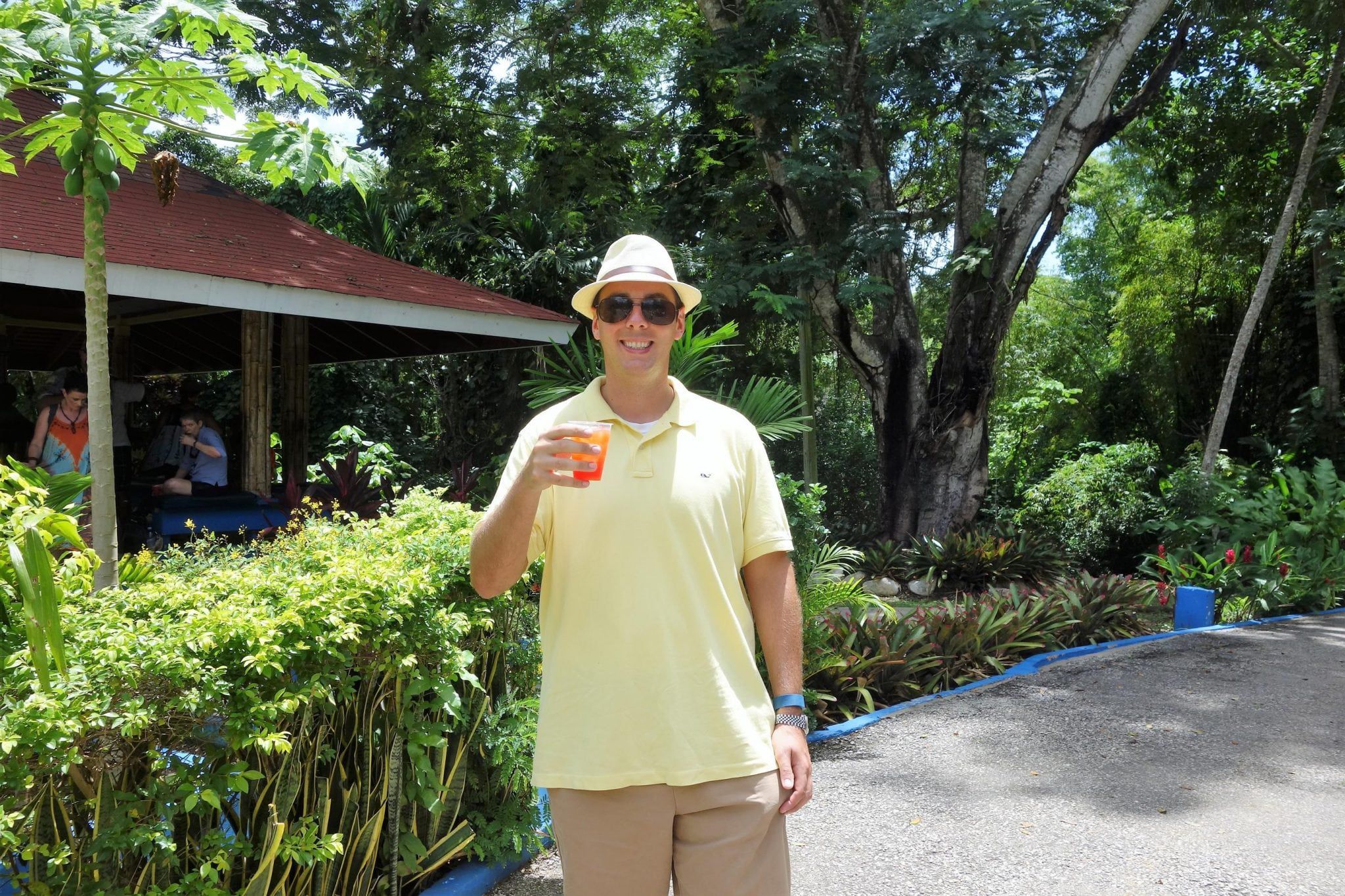 Miss Martha’s Herb Garden is also located at the Rafter’s village. The smaller than expected garden showcases some of the local plants know to be home remedies. Don’t worry, there is nothing illegal here; although during our rafting trip, our tour guide did point out a “Bob Marley plant”. 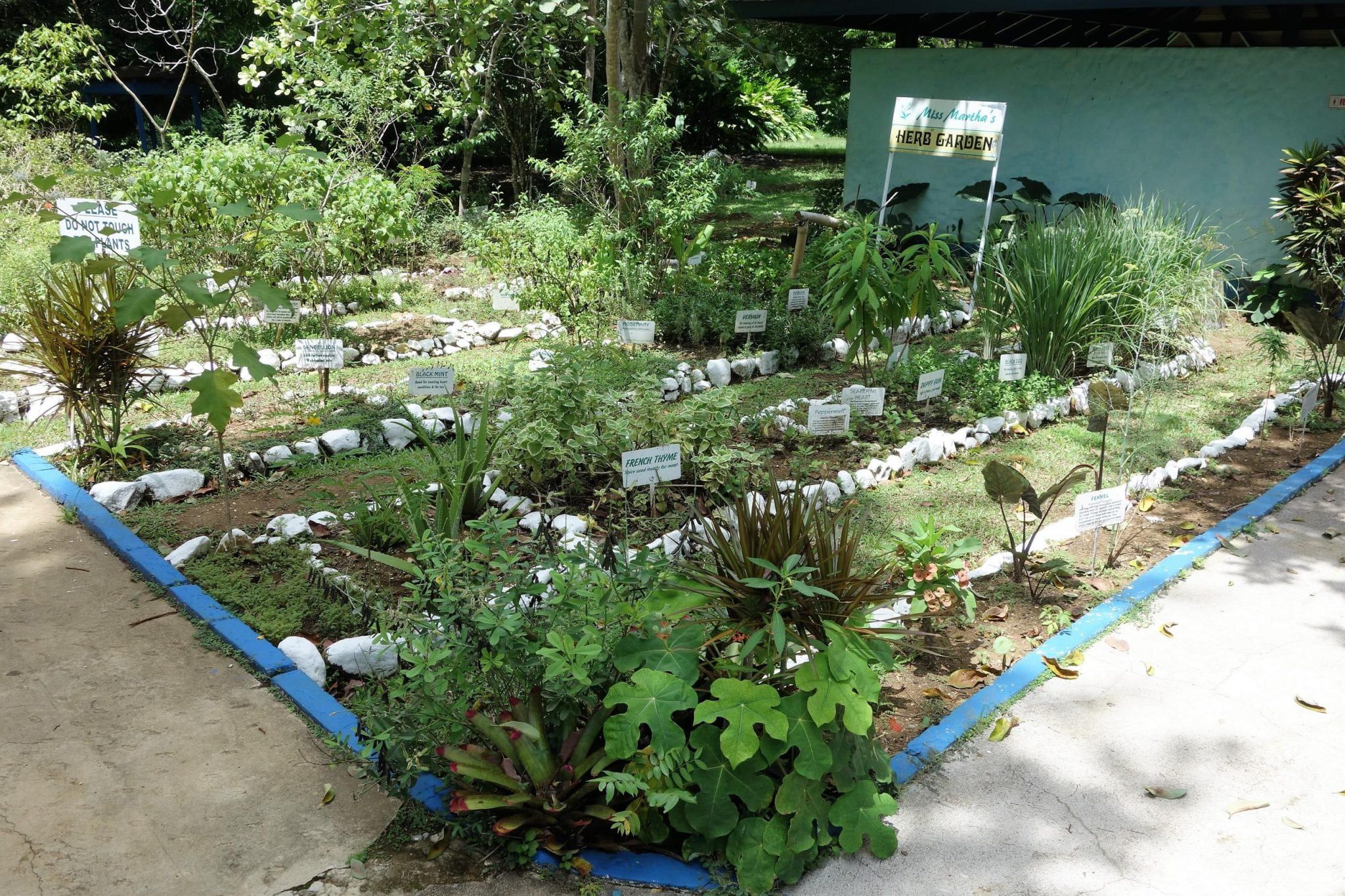 We were given about a half-hour to roam the grounds which felt like plenty of time as there was not a whole lot to really see or do. We did end up getting a souvenir, a small replica of a bamboo raft, which we are going to somehow turn into a Christmas ornament for our “vacation tree”.

When it was time to head down to the rafts, all individuals were given lift jackets, which you are told to wear for the entire trip. While we did keep them on since the Princess can’t swim, our raft guide indicated that we could take them off to be more comfortable if we wanted. At the launching station, you are lined up in pairs and guided on to a raft. It is here where we met our guide, #33, Cecil. He would be our chauffeur and naturalist for the trip down the Martha Brae River. 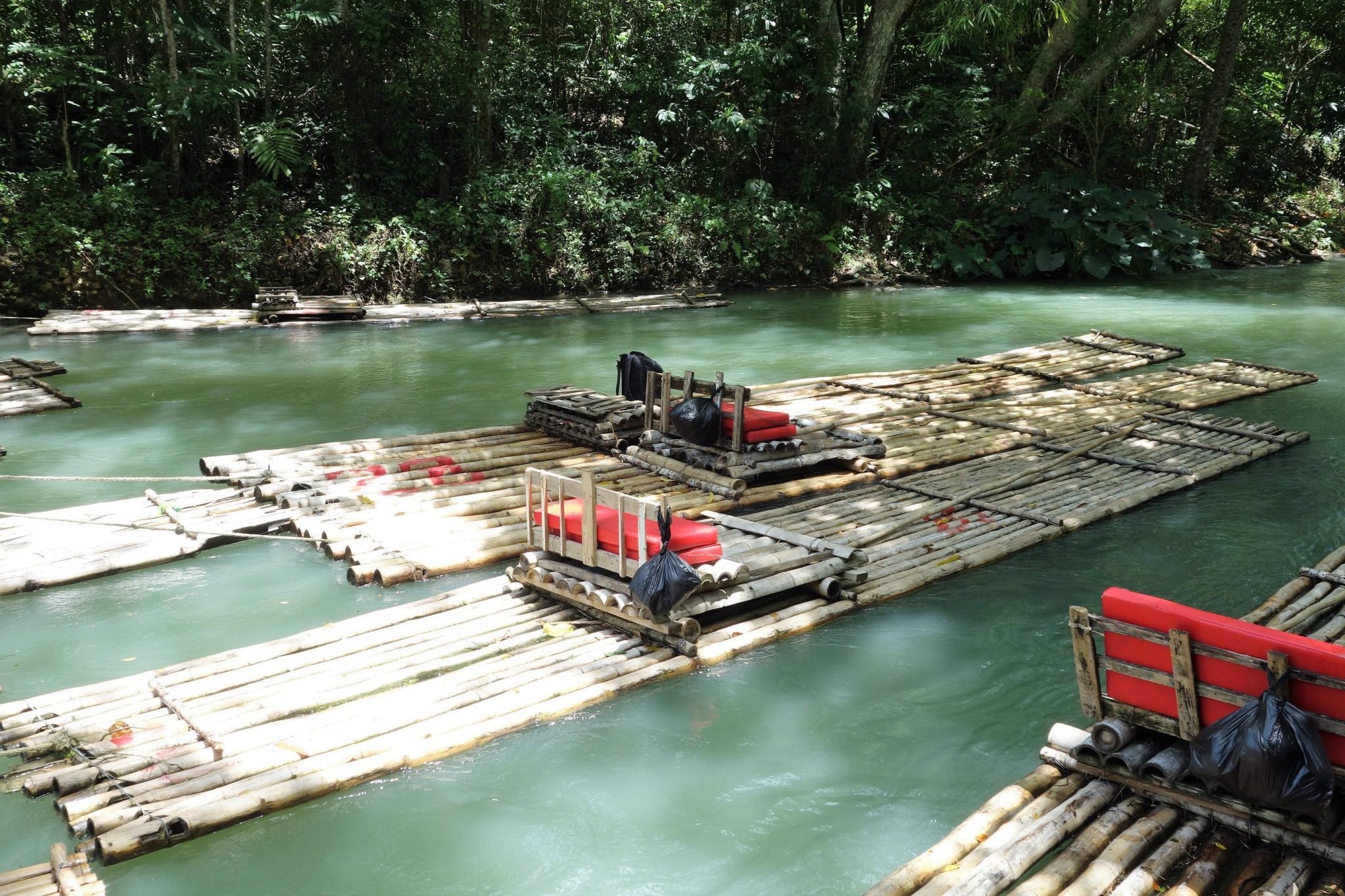 The entire trip lasts bout an hour as you drift down an approximately 3 mile stretch of the river. Once we were settled on the raft, the next obvious thing to do was take a raft selfie. Cecil offered to take some photos for us as well. If you can’t post it on social media then it didn’t really happen, right? 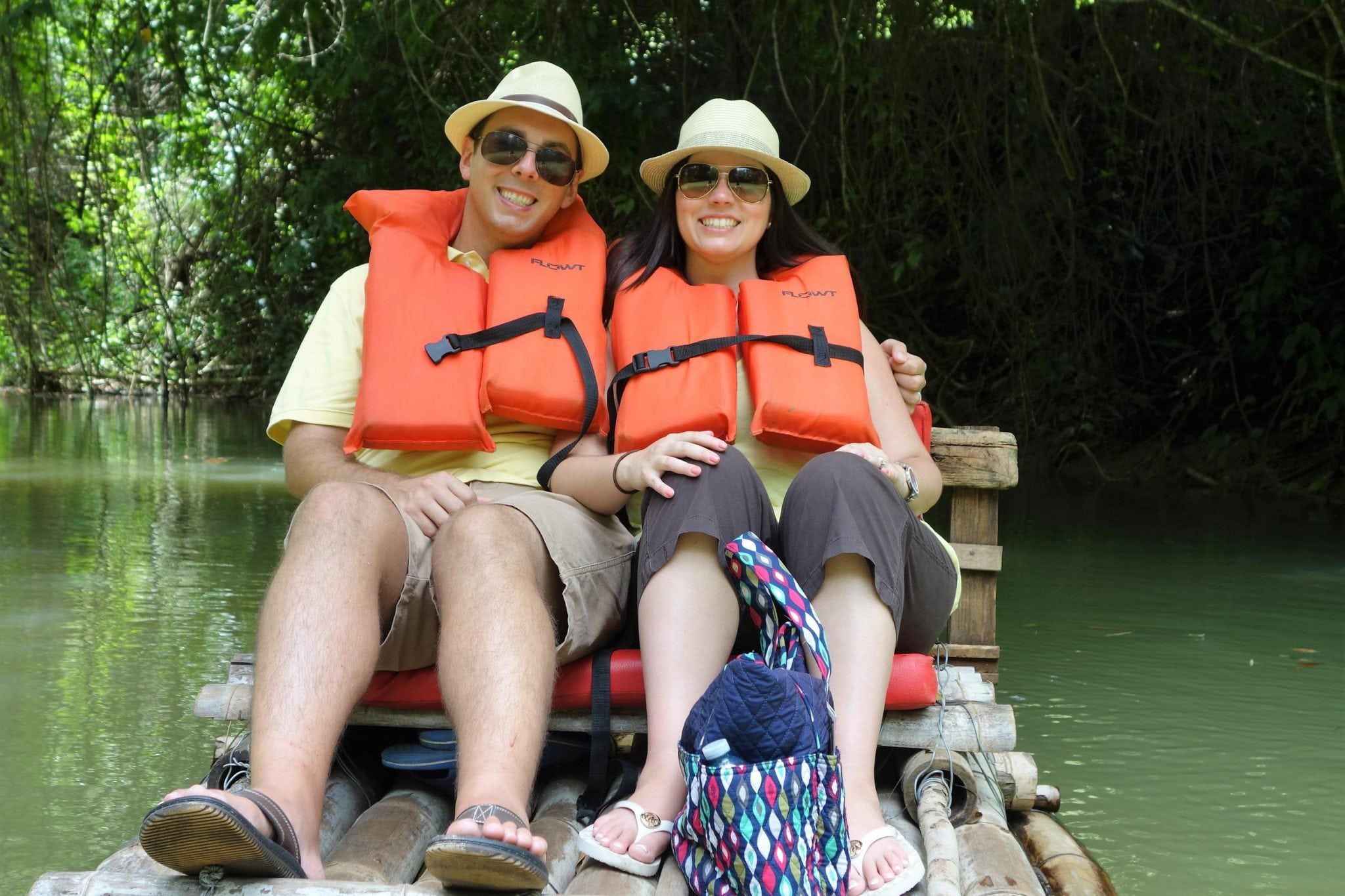 While the rafts might appear flimsy, they are rather stable, so there is very little chance that they will tip over even while climbing in and out of them. According to our guide, these rafts last about 5 years, and they are responsible for building their own rafts. The entire process can take a little over a week, from cutting and drying the bamboo to mending them together with wire. During the trip, I asked a bunch of questions, and Cecil was great at providing answers. He was an excellent captain and tour guide. If you have the chance, ask for him by name. 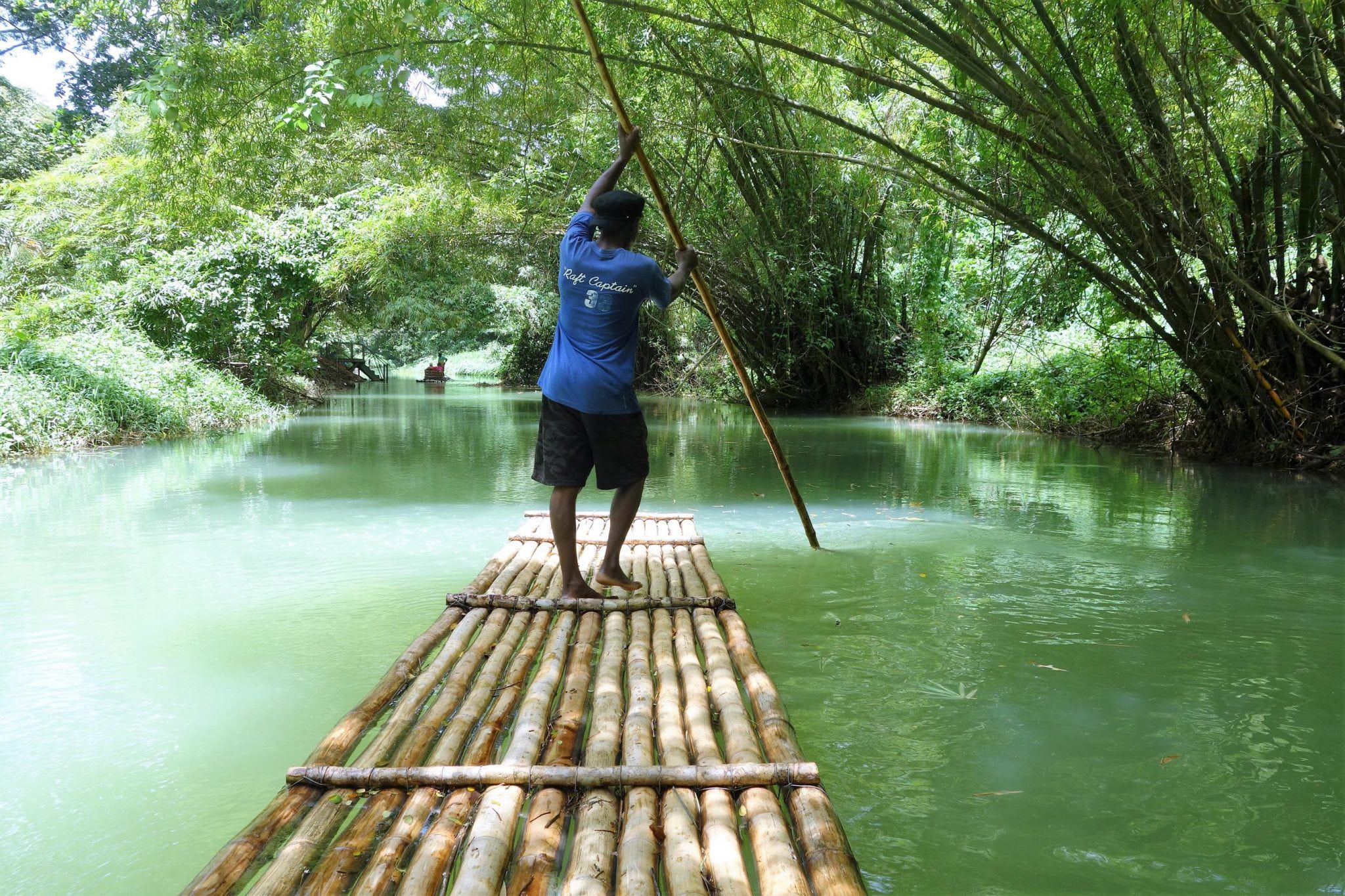 The depth of the river will range between 4 and 12 feet depending on the time of year and where you are on the river. Depending on your guide, some will let you hop off to take a quick swim or check out the Tarzan swing, but we opted to stay on-board (and dry). During our trip, Cecil was quick to point out various vegetation, from sugarcane, to the shy lady (a plant that mimics behaviors of a Venus-fly trap), along with a ton of other plants. Occasionally, he pulled our raft up to the side of the bank to get a closer look at some of the greenery. 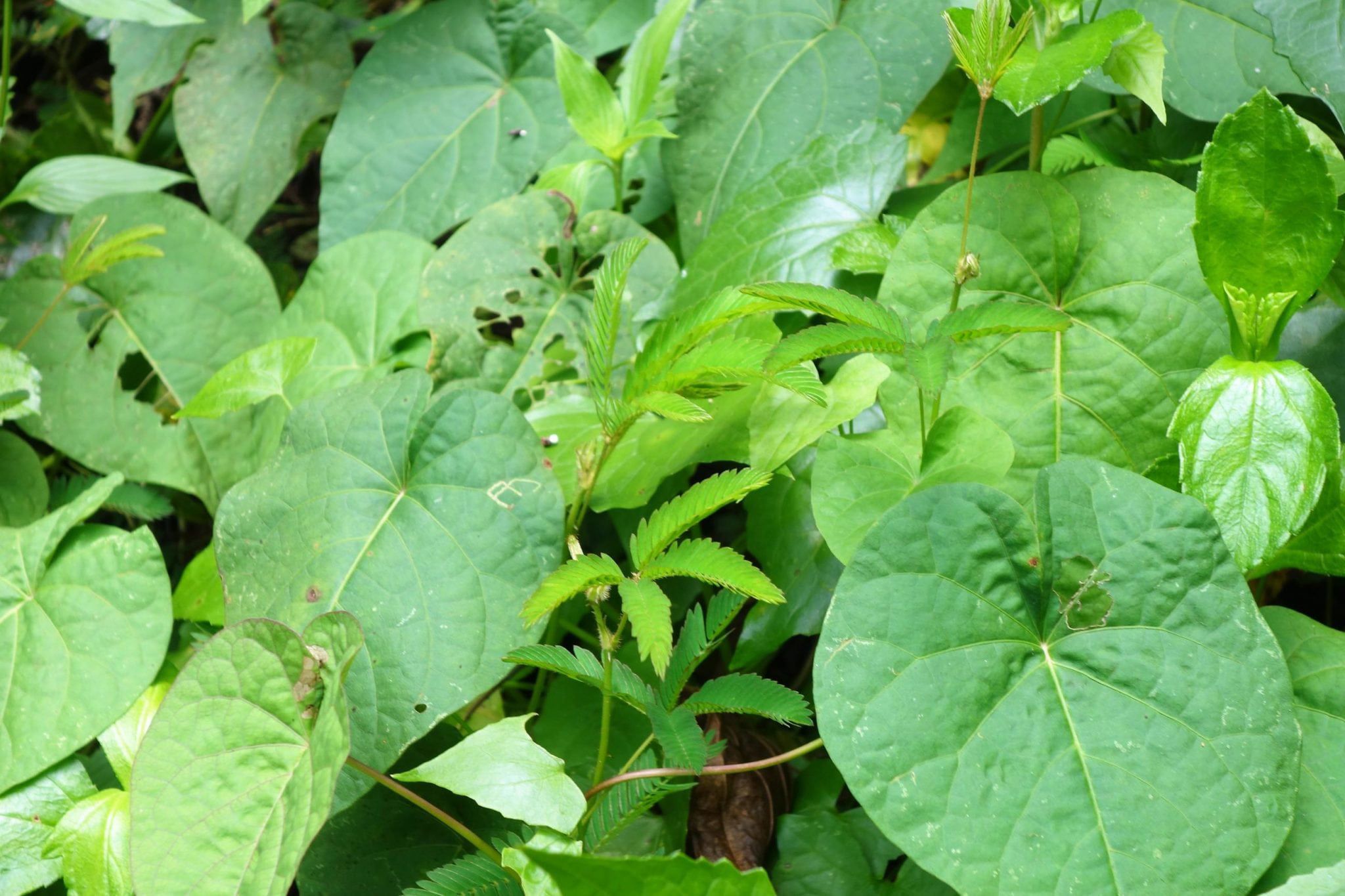 It was tough to keep up with all of the sightings from plantain trees, wild coconuts, various bird species, and other oddities. We were too slow to capture and remember. Too bad we forgot to bring our GoPro with us on this excursion. 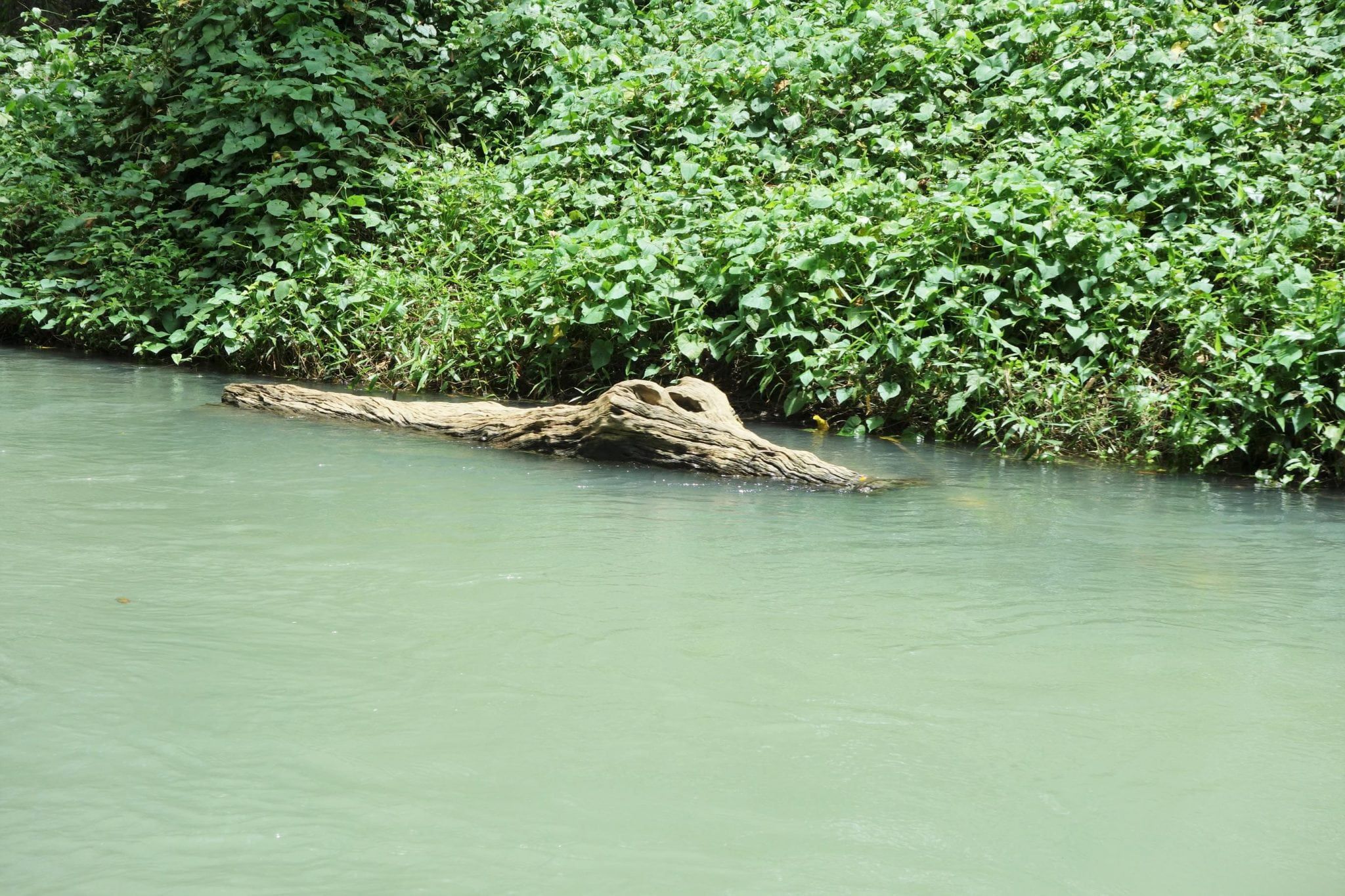 Along with the flora and fauna, there are a few other attractions along the banks. You will come across several “shops” where you can purchase shells and other handmade local goods, mostly made from calabash. Of course, Cecil had his own goods for sale also but was never rude or pushy for a sale. 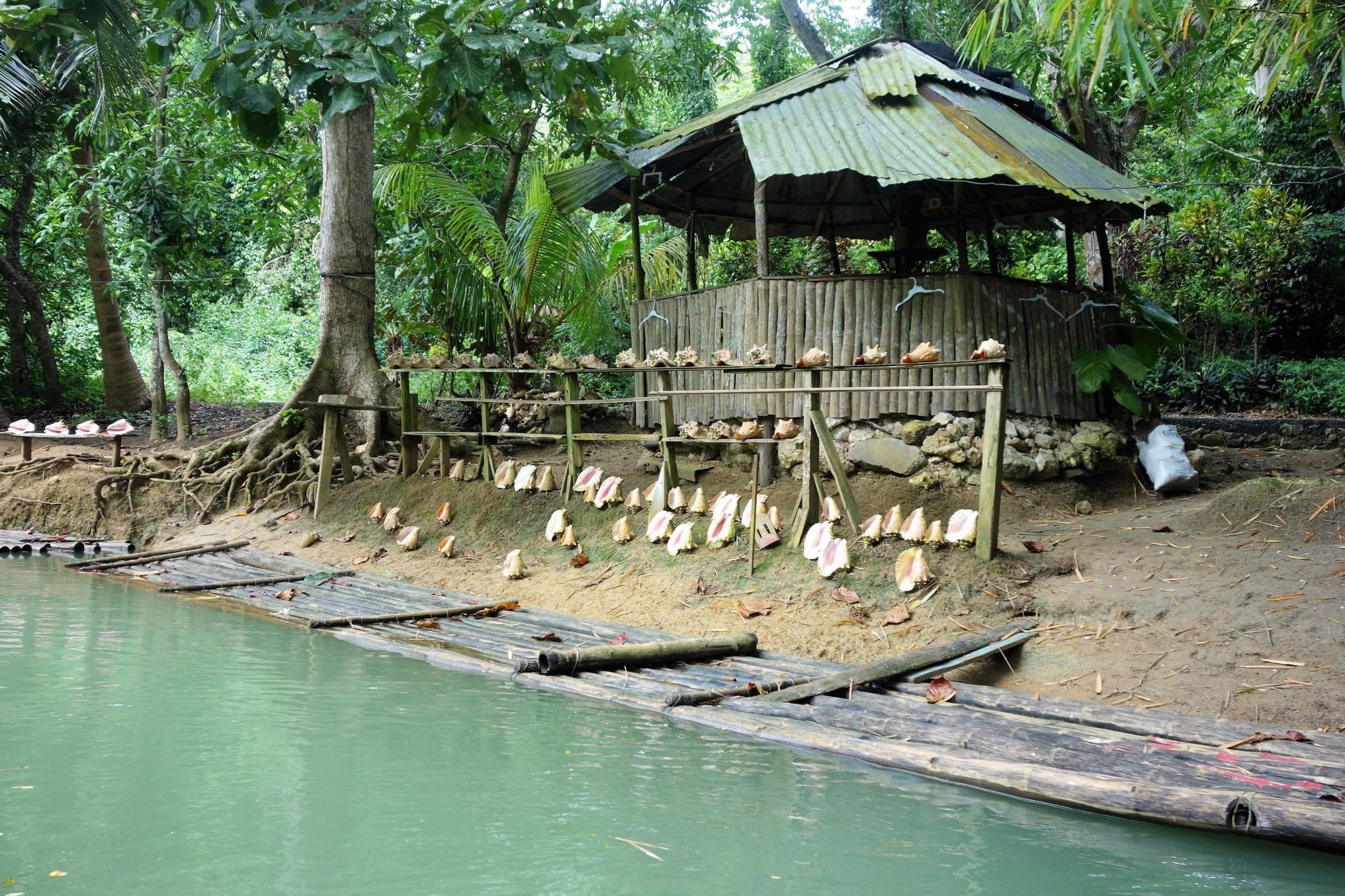 There are also stopping points along the trip for water, soda, or beer. We chose not to stop, but for those looking to unwind during this leisure float down the river, your guide will be happy to pull over at one of these “service areas” for a Red Stripe beer. 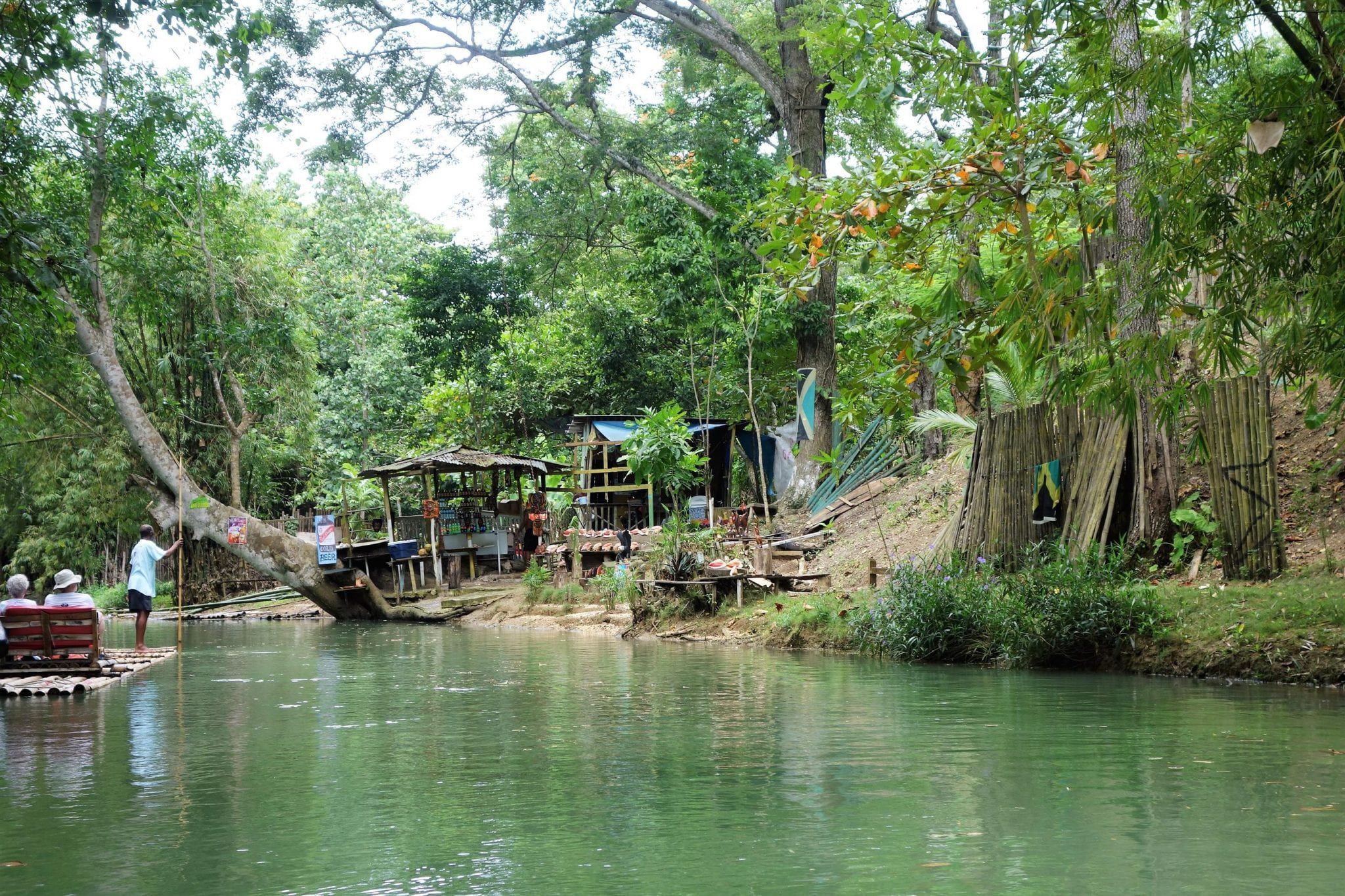 Martha Brae River Rafting – One of the Riverfront “Bars”

You will also come across a few structures, including a “business man’s” home, some historical artifacts, and other unused recreational areas. Towards the end of the trip, we came upon a “cemetery” and small park that Cecil indicated were being turned into some type of heritage site and museum. Too bad the project isn’t completed yet. 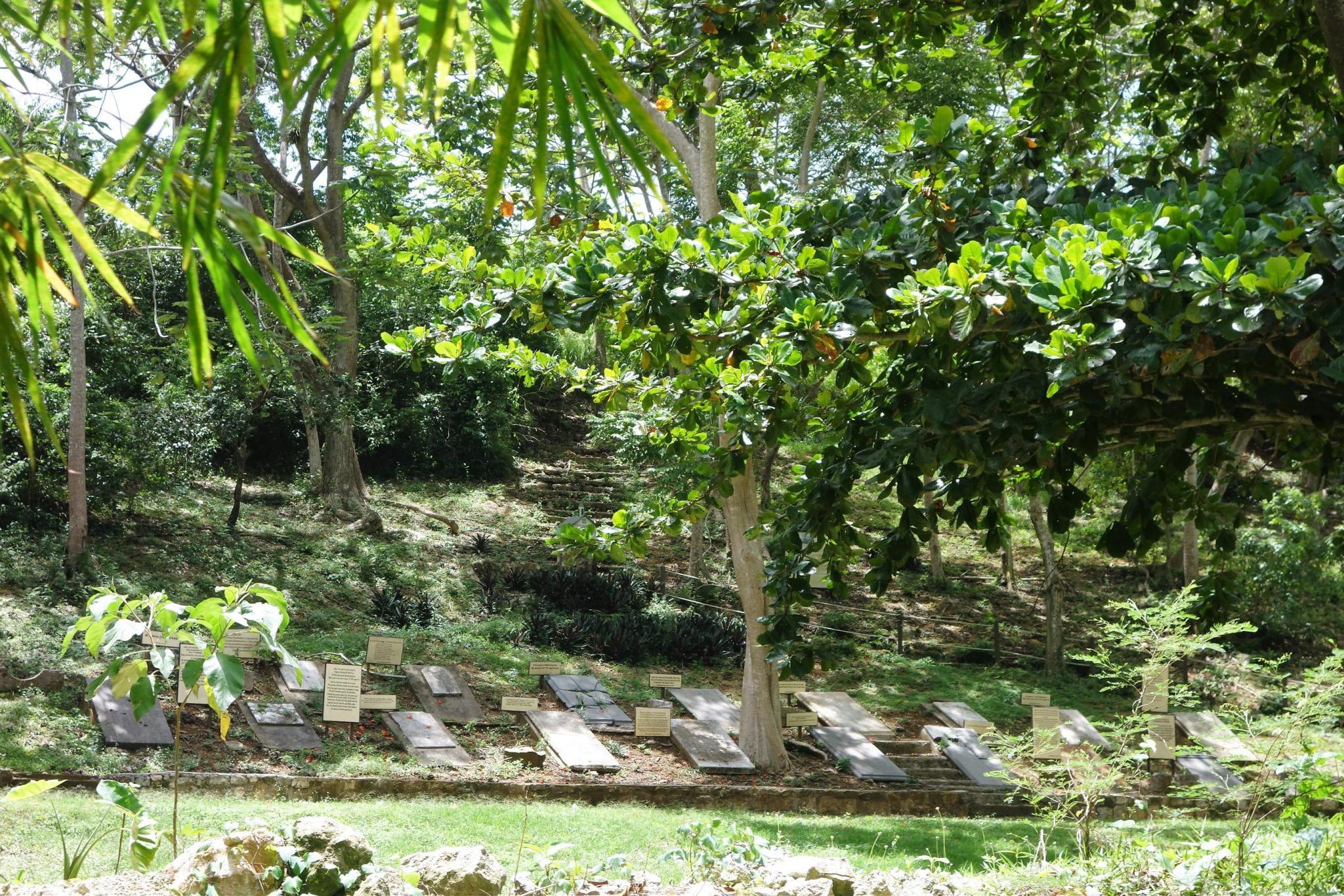 With our rafting tour lasting slightly over an hour, we came to the final stopping point three miles down the river. This rafting trip is one-way, so the tour transportation was waiting for us at the ending point. If you book the tour on your own, make sure your arranged transportation is aware of the different locations. Having an informative and serene time traveling down the Martha Brae River, we thanked Cecil for the tour and gave him a much deserved gratuity.

A dramatic change from our last adventure up Dunn’s River Falls, a rafting trip on the Martha Brae River is a relaxing and scenic tour in Falmouth, Jamaica. You can enjoy the peace and quiet of this lush land, while still learning about your surroundings and the island. Part of the experience is dependent on your raft captain. We can not say enough great things about #33, Cecil, and recommend you ask for him if you take this trip. With approximately 85 captains, they do not get the chance to work every day, so they really do appreciate the fond words and gratuities. Despite the logistics of the tour being disorganized, the rafting portion was enjoyable. While Royal Caribbean claimed the tour lasted 3 hours, we were back to the pier over 30 minutes early, leaving you time to do some other sightseeing or possibly grab some lunch.

Have you take a trip down the Martha Brae River? What type of shore excursions do you tend to book? Drop us an anchor below to share your favorite things to do ashore in Jamaica. 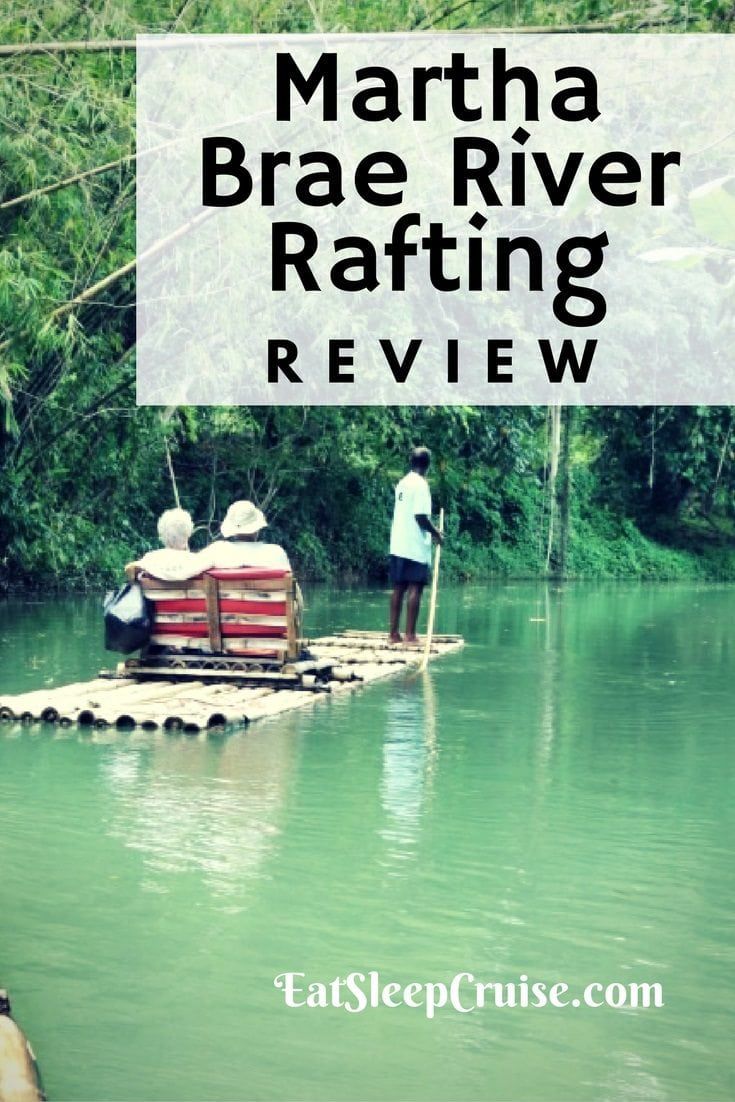 Don Bucolo, or “DB”, loves everything about cruising- the ocean, the food, and the atmosphere. While he may be obsessed with doing extensive amounts of research on ships and all elements of a cruise, Don enjoys sharing his new found knowledge with fellow cruisers. When he is not sailing the high seas, he does whatever his wife tells him to do-it only took 10 years to realize this.
Don Bucolo
Previous Post « Cruise News October 23, 2016
Next Post Cruise News October 30, 2016 »